Neither of these teams were in the Championship last season and, even at this early stage, the table shows how far apart the sides are in terms of quality. Can the promoted side, Peterborough, break recently relegated West Brom's unbeaten start? Find out with our Peterborough vs West Brom match preview with free tips, predictions and odds mentioned along the way.

West Brom to remain unbeaten with away win

Peterborough manager Darren Ferguson has faced West Brom six times in his managerial career; he's yet to beat them and has lost all bar one match. We don't think that winless run is going to end when Valerien Ismael brings his Baggies to town. Peterborough have lost three of their five competitive games played this season with their only win coming over relegation favourites Derby. West Brom meanwhile are unbeaten in the league and have won three on the spin. The only question mark on West Brom is whether the 6-0 cup mauling dished out by Arsenal will effect them; we doubt it.

There will be a fair few goals

The benchmark for total goals bets is usually 2.5 goals. We're upping that here though to 3.5 and have the stats to back up what we believe will be a bet with serious value. Peterborough have seen three of their last five matches go over 3.5 goals with a game average in that period of 3.4. Admittedly, that's just south of where we need it to be but West Brom have surpassed 3.5 goals in four of their last five with a total of 22 goals scored. That's an average of 4.4 per match.

Baggies to win with breathing space

Our last tip backs West Brom to win the match by at least one goal. We've obviously already touched on the fact we expect to see at least four goals in the game but we were never explicit in how those goals would be shared around. West Brom are averaging 2.8 goals scored per game across their opening four fixtures compared to Peterborough who are averaging at just 1.0 per match. There is every possibility that West Brom win this game with room to spare.

The best betting odds for Peterborough vs West Brom

Baggies to be too good for Posh

West Brom dropped out of the Premier League last season looking like a Championship team. It would be a stretch to suggest to now describe them as a Premier League bound team but they do look a level above most of the teams in this division. Their form is good, they're unbeaten and they have quality players in their ranks; one of them, Karlan Grant, will be a particular threat. Peterborough have very different ambitions to their hosts with their target purely survival. Sirski Dembele is a player that would get in most Championship sides and Posh fans will be praying that Jonson Clarke-Harris can prove his worth too; the latter top scored last season in League One but is yet to open his account in the second tier.

The final word ahead on Peterborough vs West Brom 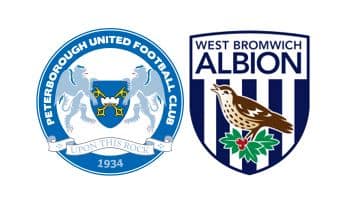