Peterborough vs Swansea: Check out our betting tips

Peterborough are embroiled in a relegation battle with games running out fast. Can they beat a Swansea team who have nothing to play for? Find out with our Peterborough vs Swansea match preview with free tips, predictions and odds mentioned along the way.

Swansea have lost their last two games but we have them winning this fixture. Their form coming in is still better than Peterborough's with the Swans having won two of their last five compared to the Posh who have taken just two points from a possible 15. It's not just that fact that swings us to back Swansea though. There is also a head to head record that screams Swansea win. The Welsh club have won the last four head to head clashes and haven't lost to Peterborough since 2006.

Peterborough's form might be bad but they have shown a little bit of something in their last two games with a draw from each. Key to that has been last seasons 31 goal striker Jonson Clarke-Harris; he scored a brace in his last outing. With that considered, we fancy them to find the net at some point. As for Swansea, they'll score as well. They've scored three goals in each of the last three meetings with Peterborough and have bagged six goals across their last five matches coming in.

Here are the key stats & form guide for Peterborough vs Swansea

Both of these teams have ambitions of playing football the ‘right way' but neither have had particularly good seasons. Swansea will look at Peterborough's position though and think “it could have been worse”.

Peterborough might be bottom of the league right not but with just six points separating them from fourth bottom Reading it is all to play for. A win here would really be massive for the Posh and it should be one of their so-called ‘easier' games.

Swansea continue to be Swansea. They can swing from looking good to looking dire within the same game and, at present, that's hampering them getting any results, or at least any consistency of results. They'll expect to beat Peterborough and if they don't, alarm bells might start ringing ahead of what will be an important summer. 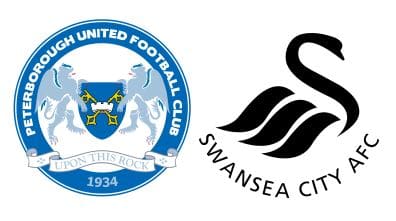