Sunderland arrive in this fixture in better form than their hosts; they've won 11 and drawn two of their last 13 matches. All good runs have to come to an end though and our prediction is that the Black Cats' run ends Monday. Why? Well, Posh are in decent form on their own patch having lost just one of 10 at home with eight wins included in that run. We're backing Peterborough's attack – and home advantage – to prove the difference.

We've just mentioned Peterborough's attack; they're the league's top scorers with a whopping 66 goals to their name to date. Sunderland are no mugs in front of goal either though having netted 58. More important though is to look at when the last time the sides failed to find the net. For the home side, you have to go back eight matches whilst Sunderland haven't blanked since 2nd January. It all points to goals at both ends.

Jonson Clarke-Harris just cannot stop scoring. The 26-year-old sits top of the league scoring charts with 26 goals to his name and his recent form suggests he's not about to stop there; he's scored five in his last four. When Peterborough play well it is usually because their main man has delivered. He's scored nearly 40% of all their league goals this season so why would they dry up now?

All the stats and odds for Peterborough vs Sunderland

Three big points and a huge confidence boost for the winner

Not only does this game pit two of the League One powerhouses against one another but it also sees the best attack in the division (Peterborough) take on the sternest defence (Sunderland). Regardless of the result between the pair, it's completely feasible that both teams end the season in the automatic promotion spots but that doesn't mean the game won't mean much. If either side can deliver three points, it will be an enormous boost to their confidence and their chances for the remainder of the campaign.

FAQ about Peterborough vs Sunderland 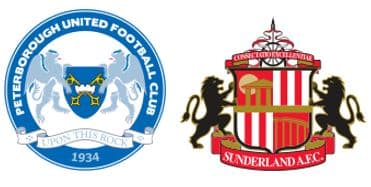