Luton remain in the hunt towards the top of the Championship table whilst Peterborough are struggling at the other end. Will this game play out to that end or will Posh find a way? Find out with our Peterborough vs Luton match preview with free tips, predictions and odds mentioned along the way.

Peterborough have been the worst team in the Championship this season; they have played 39 league games so far, and they've won just six of them. As a matter of fact, Peterborough won just one of their last 17 league games; they lost 12 of those 17 games, with four draws. In contrast, Luton Town have been one of the best teams in the league; they have no losses in their last three games, and they won three of their last five games. Also, Luton Town won their last two encounters with Peterborough; they scored seven goals in those games, whilst not conceding. All things considered, Luton Town should take all three points from this match.

Peterborough have conceded the highest number of goals in the Championship; they allowed 80 goals in 39 league games so far. Due to their tendency to concede, Peterborough's games have mostly been high-scoring games; all of their last four games saw at least four goals scored. In like manner, Luton have had their fair share of high-scoring games; six of their last seven games went over 2.5, with four of those games going over 3.5. Additionally, we should mention that the last four meetings between these sides saw at least three goals, and three of those encounters saw at least four goals scored. On that note, this will likely be a high-scoring affair.

Here are the key stats & form guide for Peterborough vs Luton

Peterborough vs Luton: Let's look at the predicted lineups

Peterborough's position down at the bottom of the Championship is probably where everyone saw them finishing the campaign back in August. For Luton though, very few thought they'd threaten the playoffs but they're looking good for a top six finish right now.

Peterborough followed an impressive 3:1 win at QPR with a disappointing 4:0 loss to Middlesbrough last weekend; they've won just one of their last 13 games across all competitions. Grant McCann's men dropped to last on the Championship table after that loss; they'll hope to bounce back with a win as Luton come visiting.

A quickfire FAQ on Peterborough vs Luton 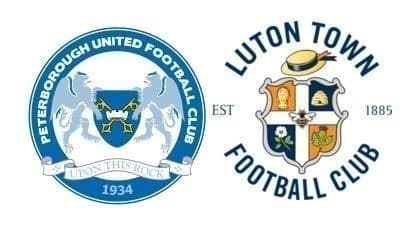