Derby are in a tough spot off the pitch right now but Peterborough have started the season woefully on it. Who will win when they meet? Find out with our Peterborough vs Derby match preview with free tips, predictions and odds mentioned along the way.

Peterborough might be the bookmakers favourites for this match but the formbook does not agree. Peterborough were taken apart by Luton on the opening weekend and followed that up with a heavy loss to Plymouth in the cup on Tuesday; it means they've won just one of their last five matches with their past four all defeats. Derby have endured a tough pre-season with a transfer embargo and rumblings ongoing. Despite that, they've won two and drawn two of the last four. They've shown a good attitude in the first couple of matches; that should help them avoid defeat here.

Our next prediction is backing both teams to score within the match. It's perhaps a bold statement to make with the fact Peterborough have blanked in their past four outings but they do have goals in their side; after all they do have year's League One top scorer Jonson Clarke-Harris in their ranks. Then you have the Derby factor; they have scored in their last five competitive matches but they've also shipped 11 goals in that time. If Peterborough are going to find their shooting boots against anyone, why not Derby?

The last of our tips backs the match between Peterborough and Derby to serve up at least three goals. Given the form of both sides on that front, it should be a banker. Derby’s last five competitive matches have served up a total of 20 goals; that’s a game average of 4.0 goals with four of the five matches exceeding the 2.5 cut off. Peterborough’s form over the same competitive time frame is even more convincing; they’ve exceeded the 2.5 mark in each of their last five with a total of 22 goals; that’s an average of 4.4.

Find the best odds for Peterborough vs Derby

Peterborough are tipped to be in a relegation battle after winning promotion last season. Derby are expected to be in one because they’re in an utter mess. It’s very early days in the campaign but Derby are showing one thing Peterborough aren’t; the ability to graft some form of result. Peterborough could do with registering something from this match after two big defeats though and the previously mentioned Clarke-Harris could have a big role to play. That said, he’ll be up against the experienced heads of Richard Stearman and Curtis Davies so it won’t be an easy afternoon.

FAQ ahead of Peterborough vs Derby 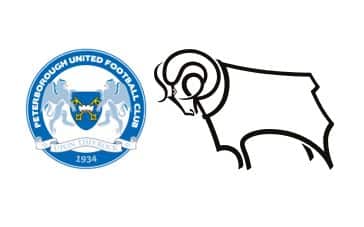