Peterborough won their first game since returning to the Championship last time out. Can they follow it up with more points here? Find out with our Peterborough vs Cardiff match preview with free tips, predictions and odds mentioned along the way.

Cardiff have made a solid start to the new campaign with a draw and a win either side of advancing in the League Cup. They're a squad full of experience and know how and that may well be what sees them through against newly promoted Peterborough. Peterborough had made an awful start to life in the second tier but a dramatic win over Derby eased any concerns; they weren't half given a helping hand by some schoolboy defending though. They won't get that out of a Mick McCarthy side.

The Bluebirds will keep a clean sheet

Our next prediction is that Cardiff record a shutout against Peterborough. Peterborough have netted five goals in their last two matches but don't read too much into that; three goals came against Spalding on the cup whilst the recent two were gift wrapped by Derby defending. Besides, even with those two games in the picture, Peterborough have still failed to score in three of their past five fixtures. As for Cardiff, they've just beaten another recently promoted side – Blackpool – to nil; it's the third away clean sheet Cardiff have recorded in four attempts.

Our final prediction is for Cardiff to win the match 2-0. We've touched on Peterborough lacking a cutting edge of late. Four of their last six games have seen them blank in front of goal with the other matches being a three goal performance against a team from the seventh tier and two goals that were from calamitous Derby defending. As for the two goals we expect Cardiff to get, they've hit two goals in each of their last two away games and over their past five competitive fixtures they've scored 11 – an average of 2.2 per game.

Odds & Stats for Peterborough vs Cardiff

Posh to be brought down to Earth after Derby ecstasy

Peterborough will be buzzing after two injury time goals saw them past Derby. They'll need to show a bit more quality to pick up further points against more hardened Championship quality. The return of Siriki Dembele is a huge boost though; he showed his ability with his coolly dispatched winner. As for Cardiff, you simply know what you're going to get from them. They'll work hard, they'll be organised and they'll be strong in both boxes. Aden Flint is the main man at the back for Cardiff and will ensure they're not giving soft goals away.

Final thoughts on Peterborough vs Cardiff 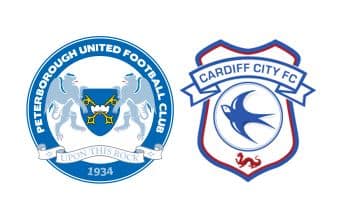