Peterborough might not have won in the week but taking a point off Bournemouth is an injection of confidence for the strugglers. Can they build on that draw here? Find out with our Peterborough vs Bristol City match preview with free tips, predictions and odds mentioned along the way.

Peterborough vs Bristol City: Our Picks

Another point for Posh

We kick off our betting tips with the prediction of a draw in this match. Peterborough looked much more solid in their draw with Bournemouth and Bristol City are hardly a huge goal scoring threat; they've only averaged 0.8 goals scored across their last five games. A point for Peterborough would find a point to be a nice little platform in which to build. Bristol City won't see it that way but they've drawn three of their past five games so aren't strangers to sharing the spoils.

Expect a max of two goals

Four of Peterborough's last five games have seen over 2.5 goals. No, we haven't lost the plot with our prediction that this game comes in south of the 2.5 mark; instead we wanted to mention those four games to explain why the bet carries value. The value certainly isn't from the Bristol City side because four of their last five have all been under 2.5 goals. On top of the stats themselves though, you have to consider that Peterborough have just shut out one of the best teams in the league too.

Our final prediction touches on a couple of points we've already discussed. Firstly, Peterborough look to be improving defensively and their clean sheet where they gave up just three shots on target proves that. Then you have the Bristol City attack; they've only scored two or more goals in one of their last five matches and are averaging under 1.0 goals per game in their last five. Even if you stretch that average goals scored over the entire season, they've only netted 1.1.

The best odds for Peterborough vs Bristol City

Peterborough vs Bristol City: The teams

Peterborough have struggled so far this season but a draw with Bournemouth will give them the confidence that they do belong at this level. It could prove huge in the long run; that's particularly true given the draw come courtesy of a clean sheet. Posh know they have goals in the team when they're at it. For Bristol City, they have plenty of knowhow in their team with Matty James and Andy King in midfield and Andreas Weimann and Chris Martin are experienced up the top end of the pitch too. Now all they need is to string some wins together. 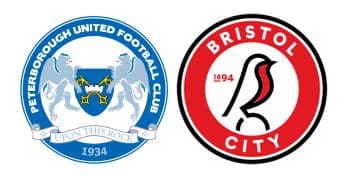