When you've shipped 13 goals in your last five games the last thing you want is an in form Bournemouth coming to visit. That's what awaits Peterborough midweek though. Can they mastermind a result? Find out with our Peterborough vs Bournemouth match preview with free tips, predictions and odds mentioned along the way.

Peterborough vs Bournemouth: Our top picks

We kick off our predictions backing an away win. Is it likely to be anything else? Bournemouth are flying at the moment with an unbeaten league record and four wins on the spin. Peterborough meanwhile are just above the drop zone having lost six of their nine league games; four of those defeats have come in the last five. To be fair to Posh, their home form is better than a their away but we don't see it mattering. Then again, it's not games vs Bournemouth that will define their season.

If the league table was based on the average number of goals your games saw then both of these teams would be in playoff contention. Peterborough sit third in that table with an average of 3.3 goals per game with Bournemouth two places lower averaging 2.6 per game. Recent form doesn't offer up much to change our minds on the over 2.5 bet either. Bournemouth have gone over 2.5 in three of the last five whilst Peterborough have seen each of their last four matches exceed 2.5 goals. The last couple of head to heads were pretty bonkers too seeing six goals each – albeit those meeting were some time ago.

Bournemouth to win game with goals at both end

Peterborough might sit down towards the bottom of the table but they do know where the goal is; it's an area they excelled in last year as they won promotion but took a while finding their feet in the Championship. Now they've scored seven in their last four home games. Bournemouth have been banging goals in for fun with the joint second best attack in the league. The biggest risk to this bet is the Cherries backline shutting Peterborough out but the odds make it well worth the punt.

Odds, stats and more for Peterborough vs Bournemouth

A match against Bournemouth is almost a free hit for Peterborough. A positive result though would be a massive morale boost for everyone at the club. Jonson Clarke-Harris is their biggest goal threat but it's probably Oliver Norburn who will have the biggest role on the pitch. What is that? Watching Phil Billing, that's what. Billing has been in sensational form so far this season with five goals in all competitions. Two have come in his last two. Ahead of him, Dominic Solanke is in blistering form too; with six goals already he's right in the thick of the top scorer race.

FAQ on Peterborough vs Bournemouth 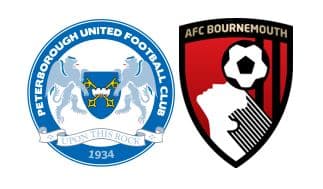