Liverpool fans may soon be welcoming a Dutch centre-back to Merseyside, but it just might not be the Dutch centre-back they’ve all been yearning for. According to recent reports it’s Perr Schuurs, and not Virgil van Dijk, who could be set for a move to Anfield in the near future.

Back in October, the Daily Mail revealed Liverpool had retained an interest in the 17-year-old defender after he had a trial with the club back in May. He impressed and the coaching staff have been keeping a close eye on him ever since.

Schuurs has continued to catch the eye for Fortuna Sittard in the Jupiler League  – a division down from the Eredivisie – and bigger European clubs are circling.

Rumours persist that Liverpool are set to push through a move, sooner rather than later, to ensure they sign him ahead of Ajax, PSV Eindhoven, Bayern Munich, Borussia Dortmund and Manchester City.

But Liverpool will have a battle on their hands to land the 6ft 3ins Fortuna Sittard captain.

Marc Overmars, Ajax’s director of football, has held personal discussions with the youngster’s representatives with a view to a future transfer to the Dutch giants.

Bayern Munich could use Arjen Robben to go on the charm offensive, while Manchester City have Pep Guardiola and most youngsters in world football would jump at the chance to learn from the Catalan born coach.

However, Liverpool must feel they’re in pole position to land him if he is to move – after all, he’s already been to Melwood and he’s met the coaches.

Reports in Holland claim Schuurs has been advised to stay in his native country and develop before a big money move abroad, but that didn't stop the Reds from watching him captain the Dutch Under-19s side against Hungary and Slovenia back in October.

So is he worth the fuss? We've taken a look.

The 17-year-old has it all. He’s a physically imposing specimen and puts it all to good use. Schuurs is composed when one-on-one with attackers, comfortable on the ball, reads the game well and it’s unnerving just how mature he is when on the pitch. You can see exactly why Jürgen Klopp is a keen admirer.

Despite being a natural centre-back, he’s been used as a defensive midfielder. This helps the teenager to improve on his positional play and allows him to make the mistakes all young players will without exposing his team.

The position also encourages him to be progressive when in possession and he makes the most of the opportunity – as shown here. It’s about picking your passes when playing in that role as opposed to just punting the ball long or playing a simple pass when there are more incisive ones on.

Schuurs is very much a modern day, ball-playing defender and is always looking to be on the front foot. But unlike others who play a similar style, he’s switched on defensively.

He anticipates danger and sniffs it out before it becomes a problem, both at centre-back and as a defensive midfielder. 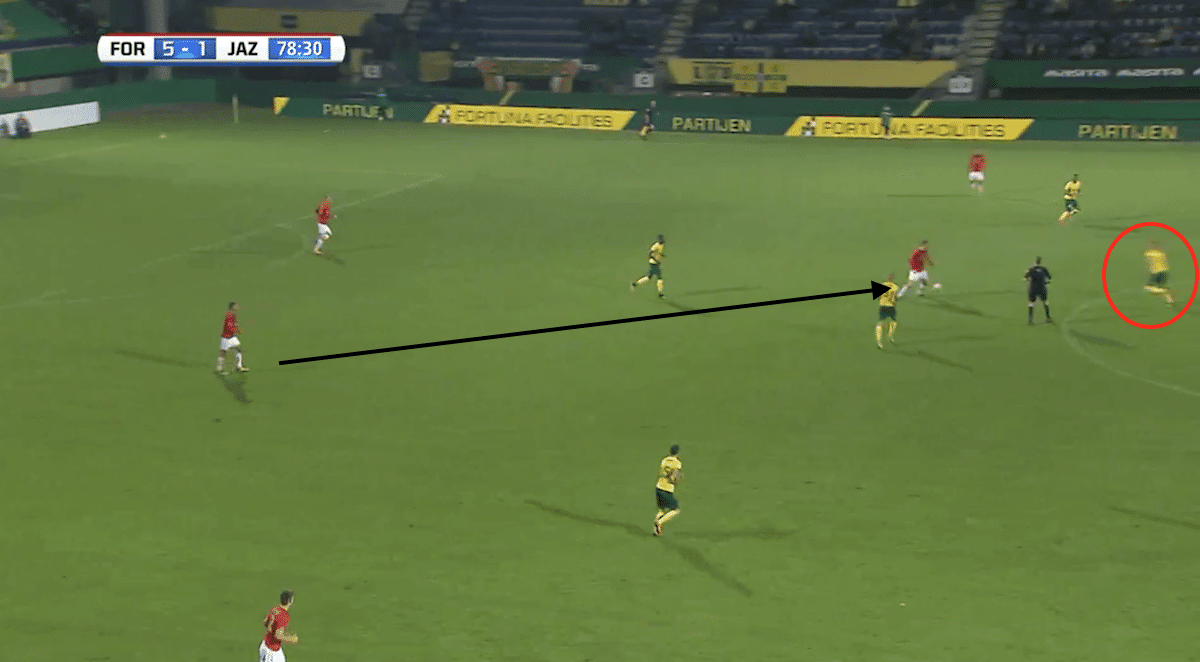 In the picture above the ball has been played by the centre-back into the feet of the midfielder, the man now in possession.

Fortuna have four players in an attacking position and they’re set to be taken out of the game if the man on the ball gets it under control and carries it forward.

Schuurs, circled in red, however, sees the opportunity to counter press and gambles on his ability to win the ball and get his side onto the attack with players already in dangerous areas. 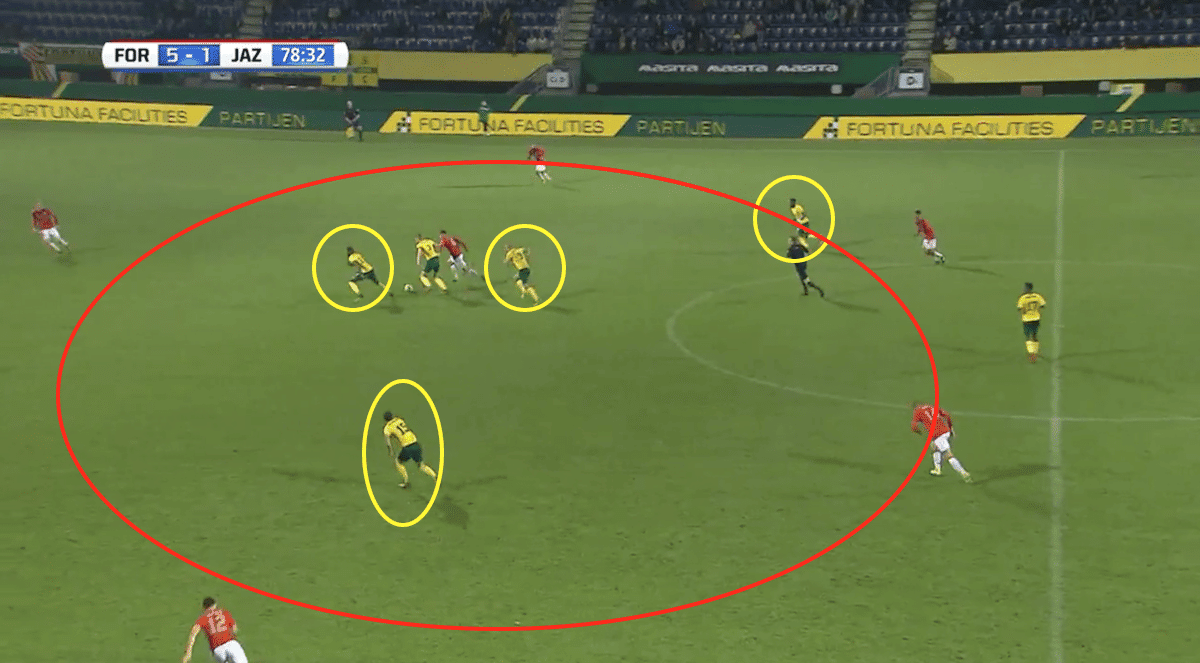 He wins the possession and Fortuna suddenly have five players in an awful lot of space in the away side’s half.

It may have been seen as a risk because if Schuurs goes for the tackle and misses then his side are exposed, but there are players supporting him and they are 5-1 up at the time.

It shows a hunger, even with the game won, to keep the pressure on the opposition and a confidence in his ability to win that ball.

What really makes him stand out from his peers, though, is his ability on the ball. 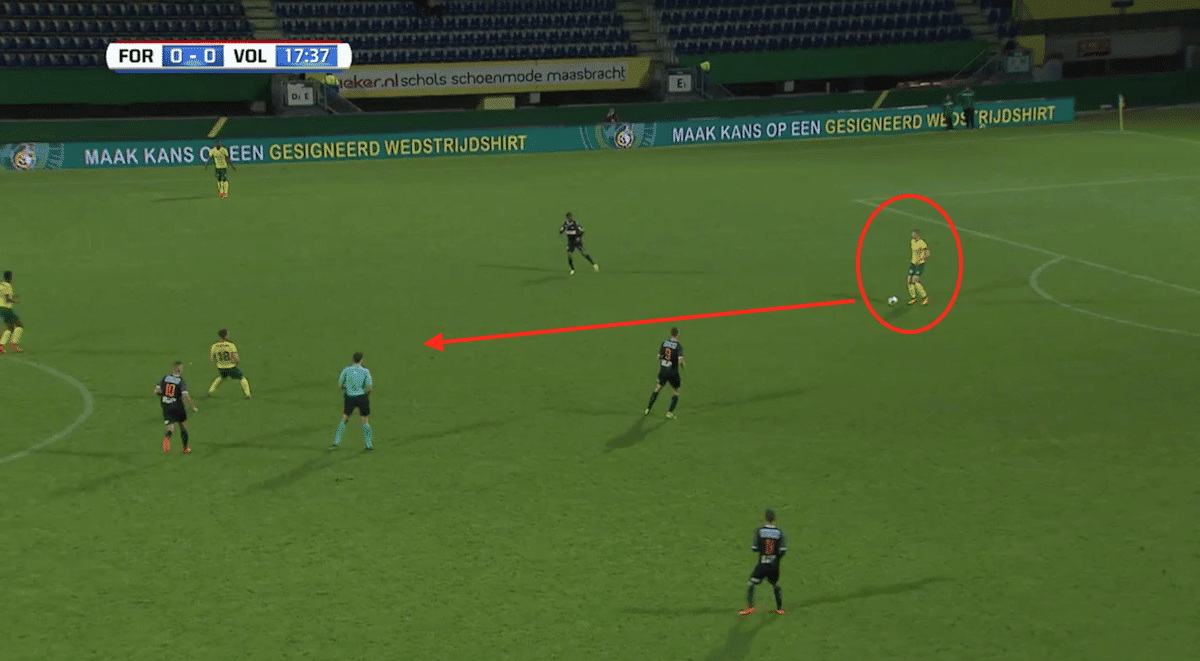 In the still above Schuurs is in possession playing as a centre-back. The away side are in a fairly advanced position and have players in areas to press the ball if he looks to play out from the back. They’re in a good position to counter press. 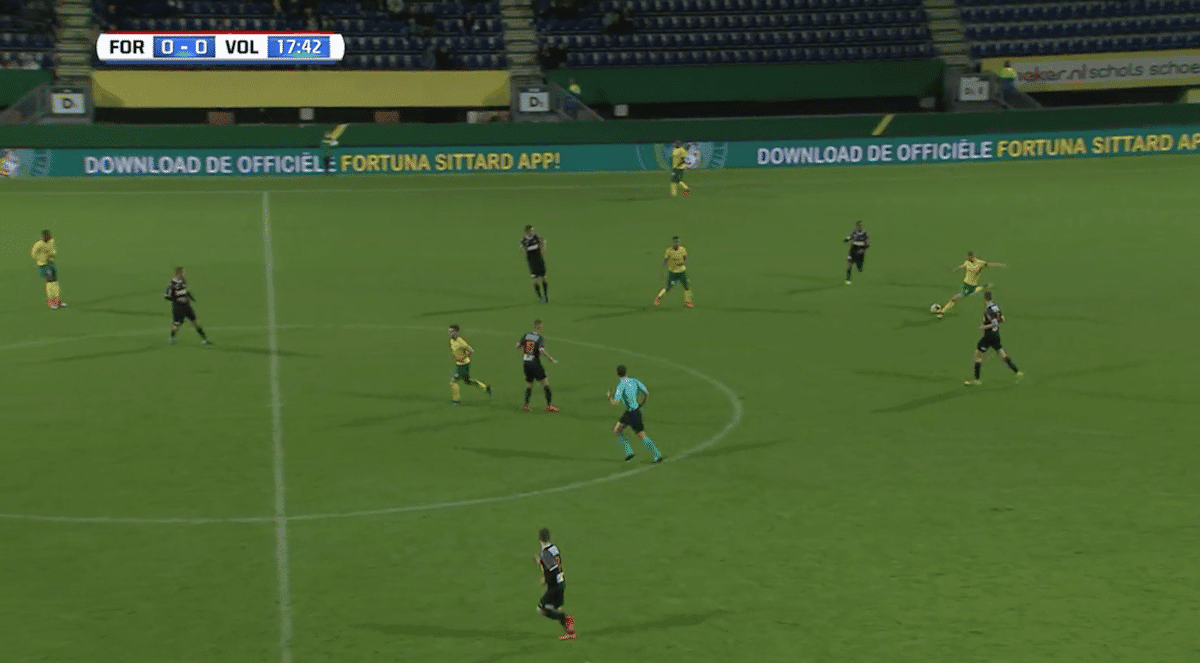 Instead, showing supreme confidence, he carries the ball forward and pushes the opposition back in doing so.

They could press him, and probably should do in fairness, but instead stand off and hope to shut off his passing options. You see the away side have six players in the picture, committing a lot of men forward.

They react slowly to Schuurs lining up a pass. 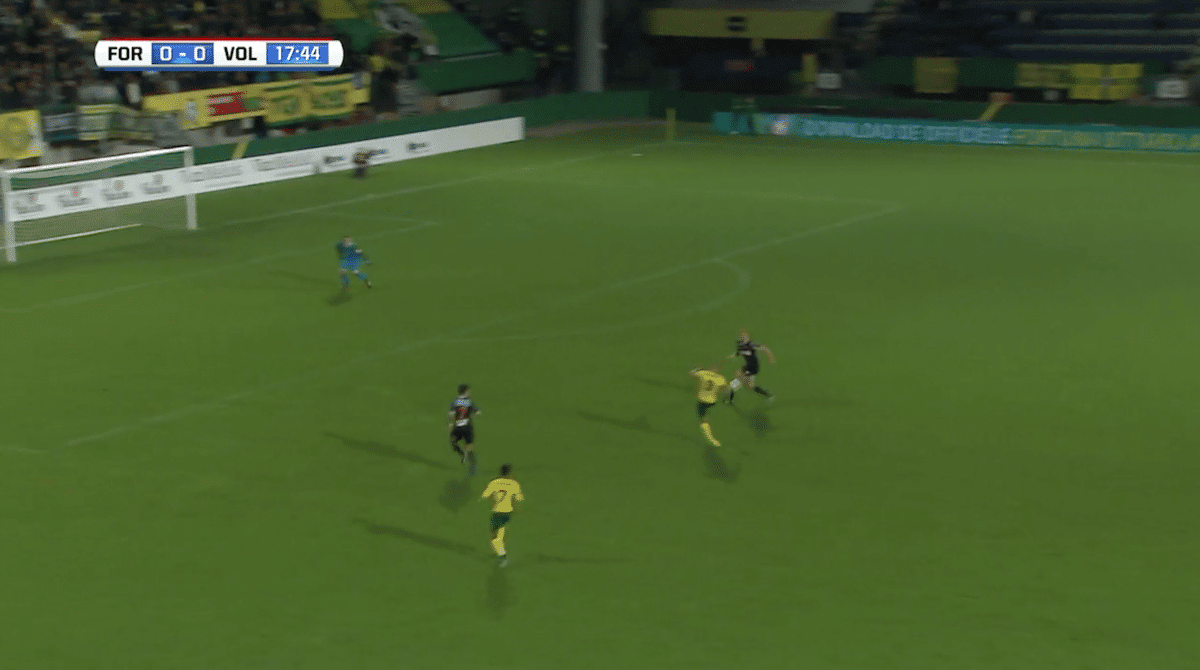 The centre-back plays the ball straight to the feet of the forward and it’s two vs two just 25-yards away from goal. It isn’t just a one off either, he plays pinpoint balls on a regular basis and it helps Fortuna turn defence into attack in the blink of an eye.

His range of passing is something Liverpool could really benefit from, especially if they continue to play a deeper defensive line to invite pressure in an attempt to create space in the opponent’s half and spring a counter.

Schuurs also has an eye for goal and has chipped in with three in ten matches this season – including a strike very similar to one Steven Gerrard scored against Newcastle United.

All in all he would be a clever investment, but if he’s to fulfil the abundance of potential he has then he’s going to need regular playing time.

Can Liverpool offer that? Perhaps. Is the defence at Anfield a place for a young centre-back to develop? Probably not. But Klopp could utilise him as a defensive midfielder until he’s acclimatised to the league.

Unlike other players he has the presence to deal with the physicality of the Premier League.