Gabriel Jesus’ arrival breathed new life into the Manchester City attack in January. Even after his injury, the spark in competition has helped Leroy Sané and Sergio Aguero find form, proving that competition can always be a good way to spur players into good performances.

Between the posts, the goalkeeper position has been in the spotlight for Pep Guardiola’s team ever since he decided that Joe Hart wasn’t the man to be his last line of defence.

Claudio Bravo hasn’t convinced, almost conceding every time he has faced a shot, something that isn’t always his fault, but it’s a damning statistic. 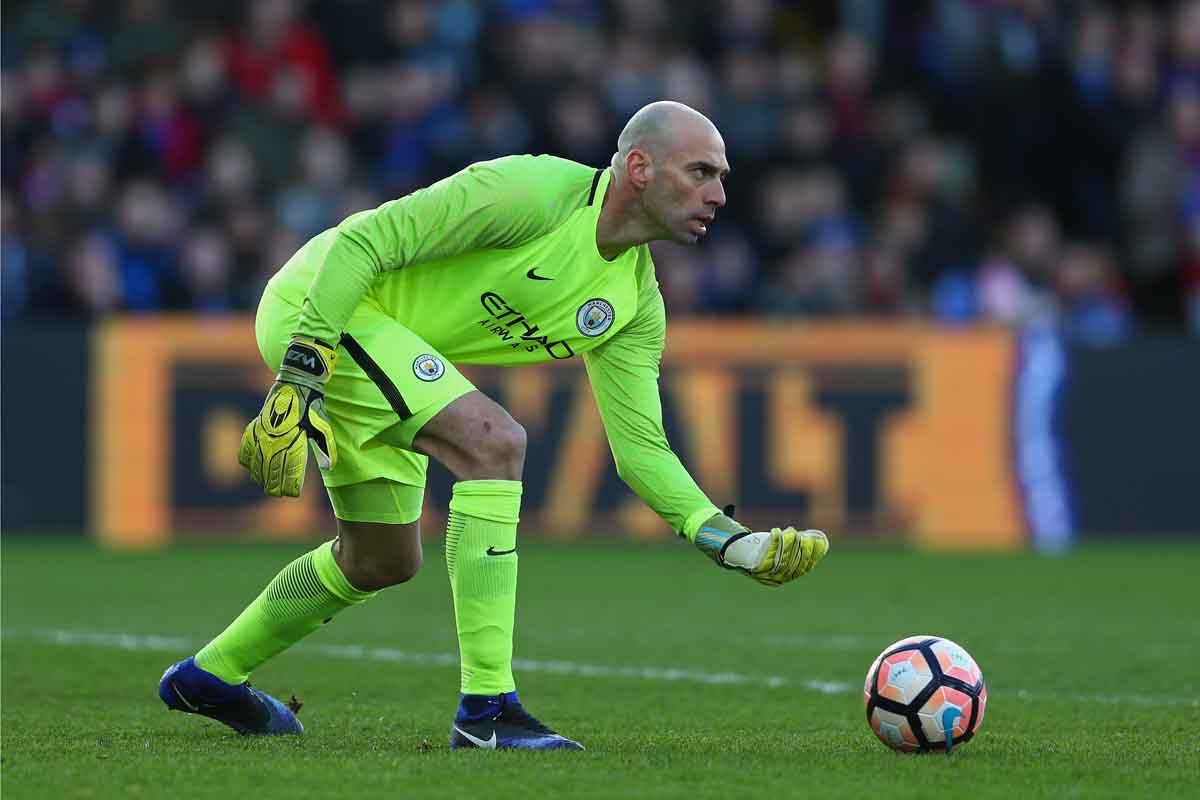 When asked about the possibility of Hart returning to the Etihad, the Spanish boss replied, “I’m so happy with Willy (Caballero) and Claudio.”

The Chilean was a £17million signing from Barcelona, brought in because he suited Pep’s style, but after being ditched and Caballero playing a heroic role in the 5-3 win over AS Monaco in the UEFA Champions League, Bravo is now set to come back in as the cup goalkeeper in Wednesday night’s fixture against Huddersfield Town.

The Argentine shot-stopper is out of contract in the summer, but with no extension in sight yet, it leaves a lot of questions.

Both keepers measure up well compared to each other when you analyse statistics from the Premier League, but it’s the 35-year-old that comes out on top — although his sample size is smaller.

In six appearances, he has two clean sheets compared to Bravo’s four in 19 games. Caballero’s conceded fewer goals on average, and makes move saves in between being beaten.

Interestingly, their passing stats, a major reason why Hart was dumped, are identical. 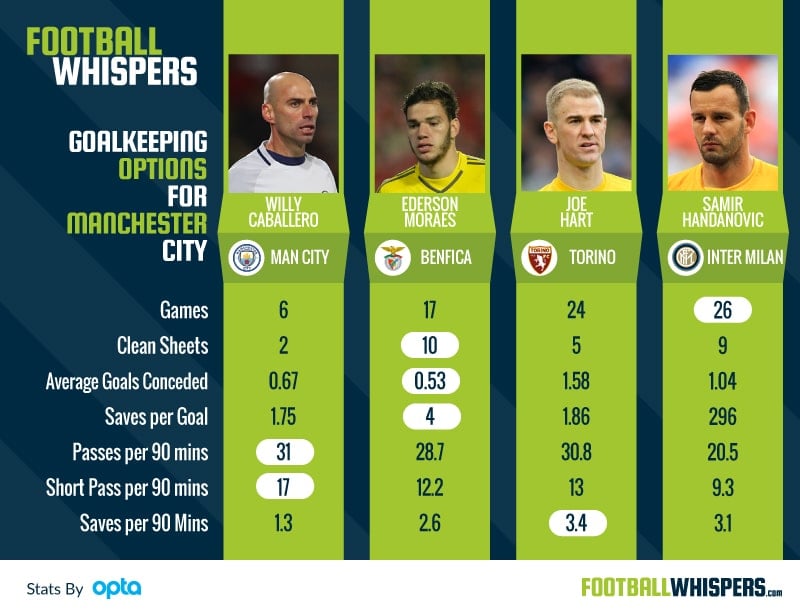 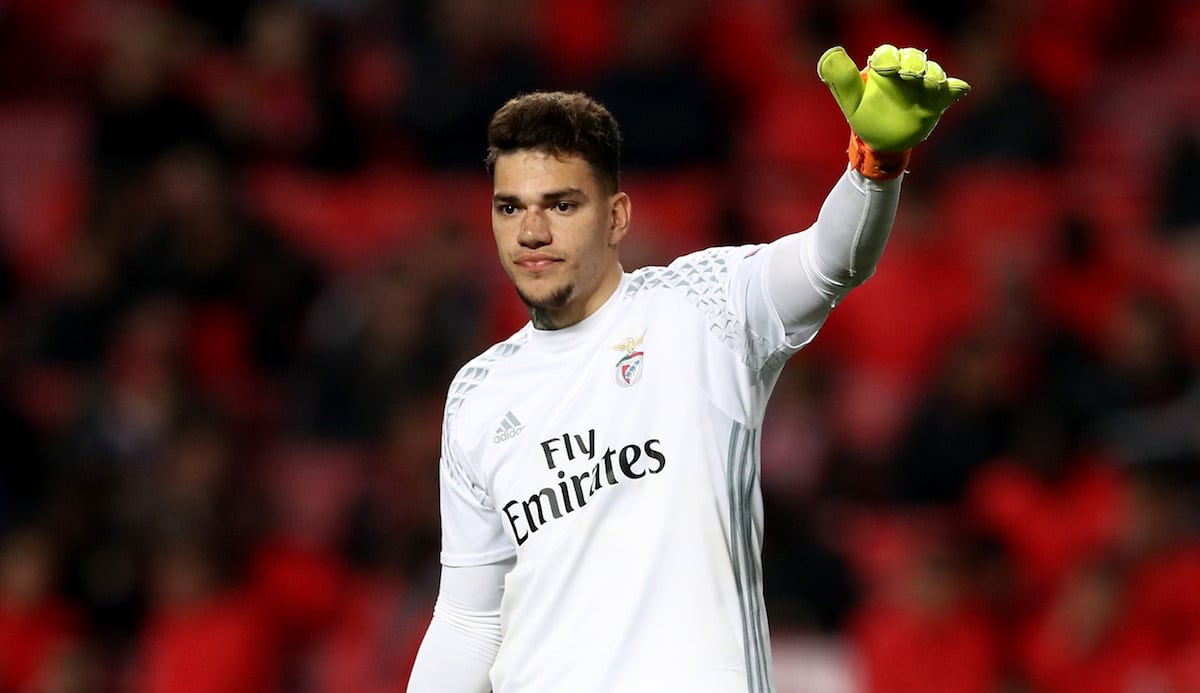 Benfica goalkeeper Ederson has been linked as a summer target recently and the 23-year-old Brazilian measures up extremely well.

He has managed an incredible 10 clean sheets in 17 games — and before anyone mentions the quality of the Portuguese league, he recorded three in his six Champions League matches this season.

He also made 3.5 saves per goal and conceded on average one goal per game.

That’s similar to his domestic numbers, but, as you would expect, they are better, with his goals per game down at 0.53.

Ederson is commanding with a big frame and confidence in the air. He reacts well, either rushing out to close down danger, or diving low to cover.

When he is beaten, it’s usually down to the quality of the finish, rather than his error.

With 28.7 passes per 90, he’s not a million miles away from the City duo, with 12.2 per game, which clearly shows why Pep would be interested.

The Experience of Handanovic 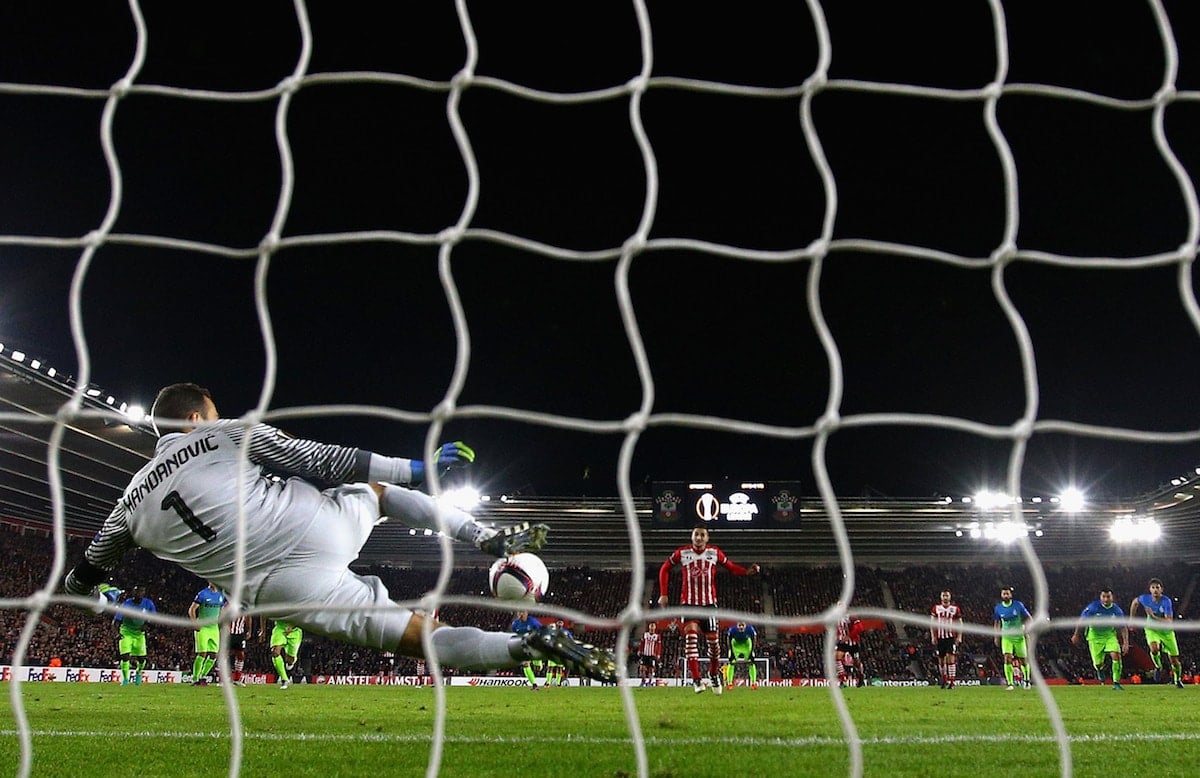 Samir Handanovic has established himself as one of the best goalkeepers, not just in Serie A, but all of Europe.

The Slovenian, perhaps due to the performances of club and country, hasn’t been able to shine on the biggest stage, but with nine clean sheets for Inter Milan in 26 appearances, he’s enjoying another wonderful campaign and this is why City are linked with making a move.

Conceding around a goal per game is up there with the best, with 2.96 saves per goal, he dwarfs the City keepers.

Similar to Ederson, the 32-year-old has a big frame, but can get down quickly to shots across the floor.

You only have to look at the two sensational strikes from Radja Nainggolan for Roma at the weekend to see what you need to do to beat Handanovic; Chelsea loanee Juan Cuadrado went one better, but all three were phenomenal efforts.

His reflexes are amongst the best in Europe and he’s translated that into an excellent penalty stopping record. Although 32 years old, he’d still be a great signing.

One player, who was heavily linked with a Premier League move in the past, is Paris Saint-Germain’s Salvatore Sirigu.

Deemed surplus to requirements at the Parc des Princes, the Italian goalkeeper, still only 30, was cast aside by the club, replaced by Kevin Trapp and sent out to Sevilla and Osasuna on loan.

With only four appearances for either Spanish side this season, it’s hard to compare current form, but in the 2014-15 campaign he was excellent for the Parisians.

Sirigu recorded 12 clean sheets in Ligue 1, 0.82 goals conceded per game and 2.1 saves each match for a dominant PSG team.

What is intriguing, he made just 18.4 passes per 90 for the French side, but this season his average jumped to 44 for Sevilla and 32.8 for Osasuna, showing that he does have that side to his game.

Available on the cheap, an excellent shot-stopper and someone who was continually solid in Ligue 1. During the early days of the QSI-era, without Sirigu, PSG wouldn’t have won as many games as they did.

If Pep is unconvinced by the any player in the long-term, the former Palermo shot-stopper would be an excellent short-term solution. 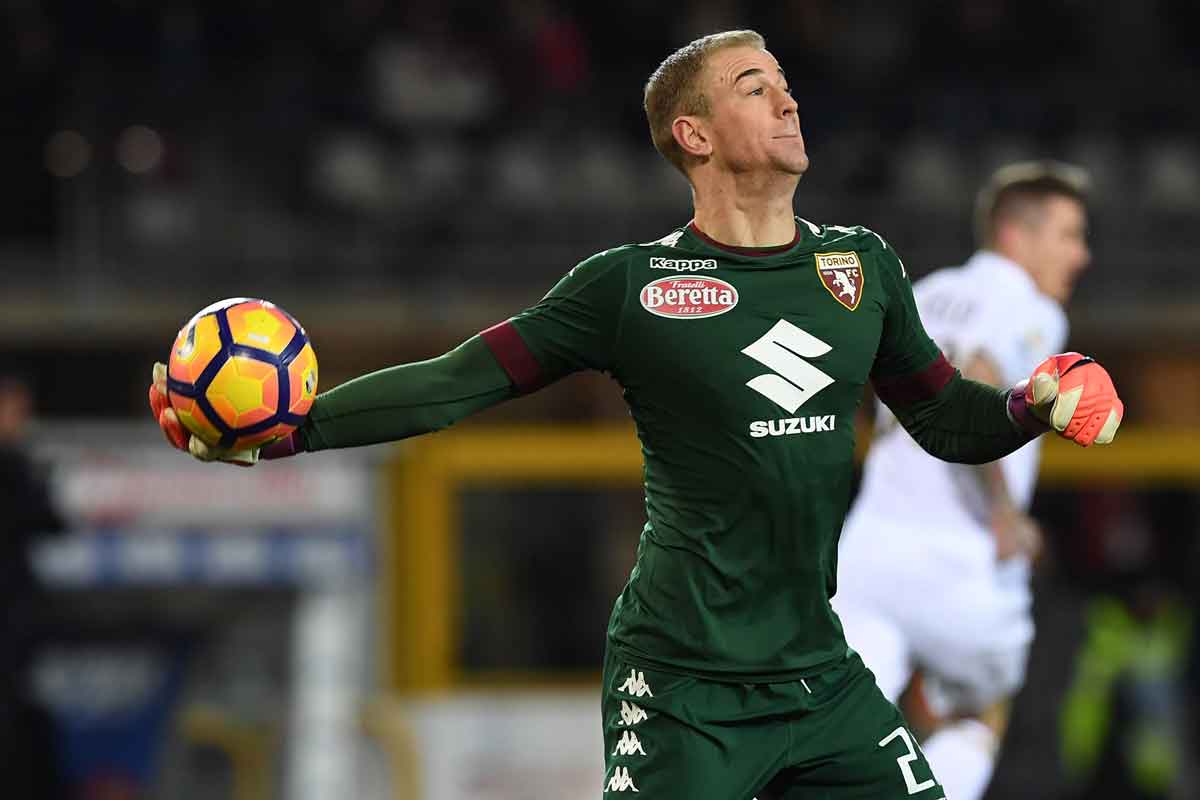 With five clean sheets in 24 league games for Torino, Joe Hart has been good, if not spectacular in Serie A.

Compared to Handanovic, he concedes more per game and makes fewer saves per goal. The Englishman makes 3.4 saves per game, that’s a higher rate than the others, but in a mid-table club like Torino. Only five clubs in Italy concede more shots per game than the Turin club, therefore you will be forced to make more saves.

In comparison, Inter face 10.7 shots, Torino 14.7, which highlights why Handanovic’s 3.1 saves per game is a much better performance than Hart.

Only four teams have let in more goals this season, even the clubs in 15th, 16th and 17th have a better defensive record.

Bravo and Caballero may not be doing enough to secure their long-term City futures, but Hart hasn’t convinced as much as some outlets would have you believe.

If Guardiola wants a solution now, Handanovic is the safe pair of hands to pursue, but Ederson has the potential to be a world beater and is already out-performing the others on this list.