Pepe can always be relied on for some light relief, at least from a neutral’s perspective. For years, he has been something of a pantomime villain and even now, well into his 30s, the Portuguese centre back knows how to raise a smirk in exasperation. Others have a more irate reaction to Pepe’s behaviour.

Mehdi Benatia opted to laugh as the 35-year-old crumpled to the floor with the Moroccan defender placing no more than a hand on the shoulder of Pepe. It was a comical reaction that epitomised why so many have the former Real Madrid centre back as public enemy number one. However, this somewhat masks his quality.

There’s a reason Pepe has been an ever-present for some of the best teams in the European and international game for years. He is a very solid defender and even as in the twilight of their career, as he is now at 35 years old, the Beskitas centre back is key to Portugal’s chances at this World Cup. They depend on him.

Pepe has won 4.33 aerial duels per 90 minutes at this World Cup, illustrating just how important he is as a physical presence for Portugal. This will serve them well against Uruguay, a team who also like to opt for a physical style. Edinson Cavani is a striker who causes most opposition sides problems in the air, but Pepe is better equipped than most to thwart him on Saturday. That could be a key battle to watch.

The 35-year-old is also key in the way Portugal play out from the back. Unlike many teams at this World Cup, the Seleção like to move up the pitch as quickly as they can and this often means playing balls from deep into the channels for Cristiano Ronaldo, Gonç 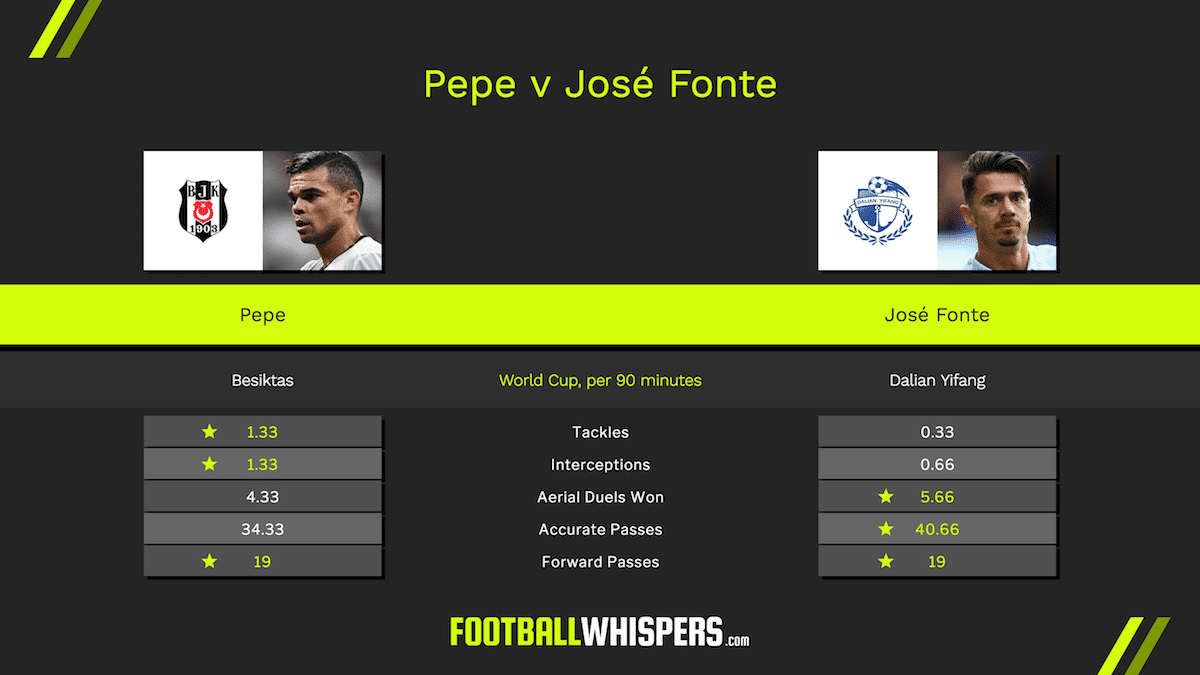 Averaging a massive 13 long balls per 90 minutes at this World Cup, Pepe has been crucial in playing those passes over the top for Portugal. It might not be the most refined approach, but it has proved effective for Fernando Santos’ side. It worked for them at the European Championships two years ago and so far it has worked for them in Russia this summer.

Pepe has also averaged 1.33 tackles and interceptions per 90 minutes over the course of the tournament so far, but he is not so much a proactive defender, but a reactive one, reflecting Portugal’s approach as a team as a whole.

If the Seleção are to go much further at the World Cup, Pepe will have to stay on top form. Despite his conduct in the three groups games played so far, the former Porto and Real Madrid man has been crucial. 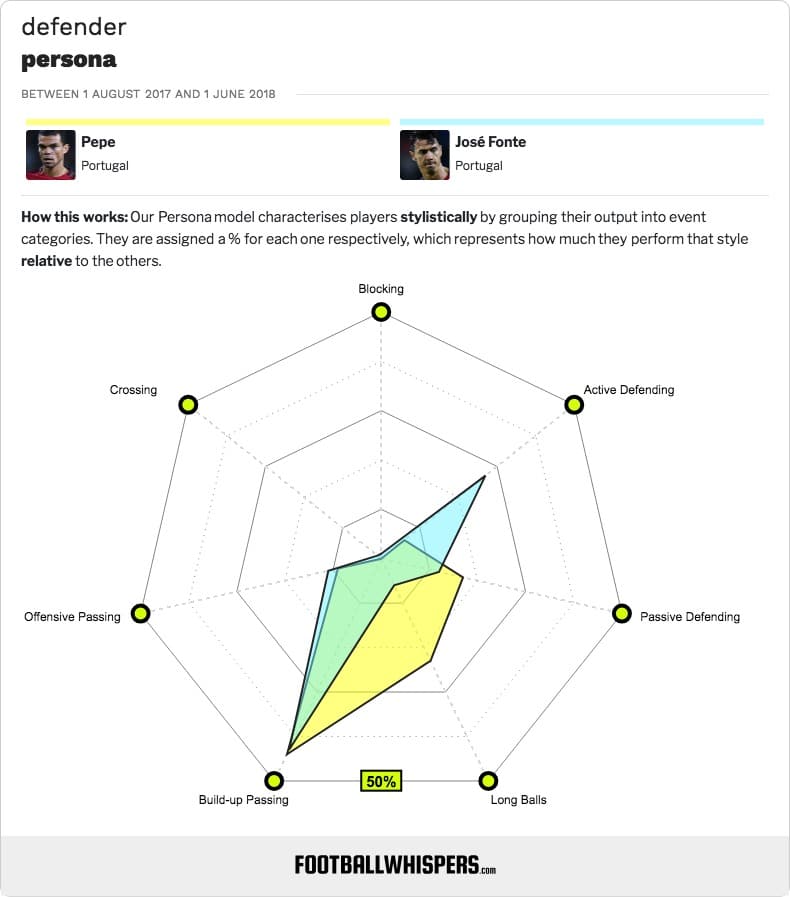 This Saturday will see Pepe go up against another centre back of the same mould on the other side, with Diego Godín similarly a key figure for Uruguay. He too is a master of the sport’s dark arts and so football purists perhaps shouldn’t watch the last 16 clash between Portugal and Uruguay. There will be a lot for the referee to keep an eye on.

However, Cavani and Luis Suárez will take encouragement from how Diego Costa managed to get the better of both Pepe and José Fonte in the opening group game between Spain and Portugal earlier in the tournament.

For all their short balls and passing triangles, it was a long ball and a set piece that saw the Atlético Madrid forward net twice.

So while Pepe has been key in Portugal’s march to the last 16, there is still room for some improvement. Portugal will be tested by set pieces, in particular, against Uruguay on Saturday, with Godín also a threat from corner kicks and free-kicks.

There are others who have been more susceptible than Pepe, like Raphaël Guerreiro and Fonte, but the veteran must be the one to take charge.

Naturally, Portugal’s World Cup chances will be defined by what Ronaldo can do in the final third. “He's very happy to be with us and he's full of confidence every day, in every match,” Pepe said in an interview this week.

“It’s a privilege for us, Portugal, to have a player like Cristiano Ronaldo.”

But while there is no doubt Ronaldo is Portugal’s difference-maker, their whole game plan is built on what happens at the back, and in that regard it’s Pepe who is their organiser, their defensive general.

Sometimes, it might be difficult to see through all the diving and playacting, but the veteran Portuguese defender is so important to his team’s chances at this World Cup.

Sampaoli the most important man to Argentina – not Messi

6 greatest teams not to win the World Cup