Links of  Thiago Alcântara to Manchester City emerged this week and should really come as no surprise given the magnificent relationship between player and coach.

It’s of the utmost importance for Guardiola that his players buy into the philosophy he professes, and Thiago is someone who is a fully paid-up member, with the t-shirt, keyring and every other piece of merchandise.

While it may be deemed unnecessary to be focusing on signings as City bask in the glow of a glorious title win, Guardiola’s demanding nature means attention is already swinging towards next season. After all, there is a Premier League crown to defend, but most important of all, an assault on the Champions League that needs to be planned out. Thiago could well prove to be the sort of character required to lead that charge.

Thiago, despite being 27 years old, has already accomplished a lot. At Barcelona he won several La Liga titles, as well as a Champions League. At Bayern, where he has been more influential, he’s won five Bundesliga titles as well as DFB Pokals and a Club World Cup.

Now fit and firing, he is set to also play a pivotal role at the World Cup this summer for Spain, with Julen Lopetegui a huge fan of the Italy-born player. 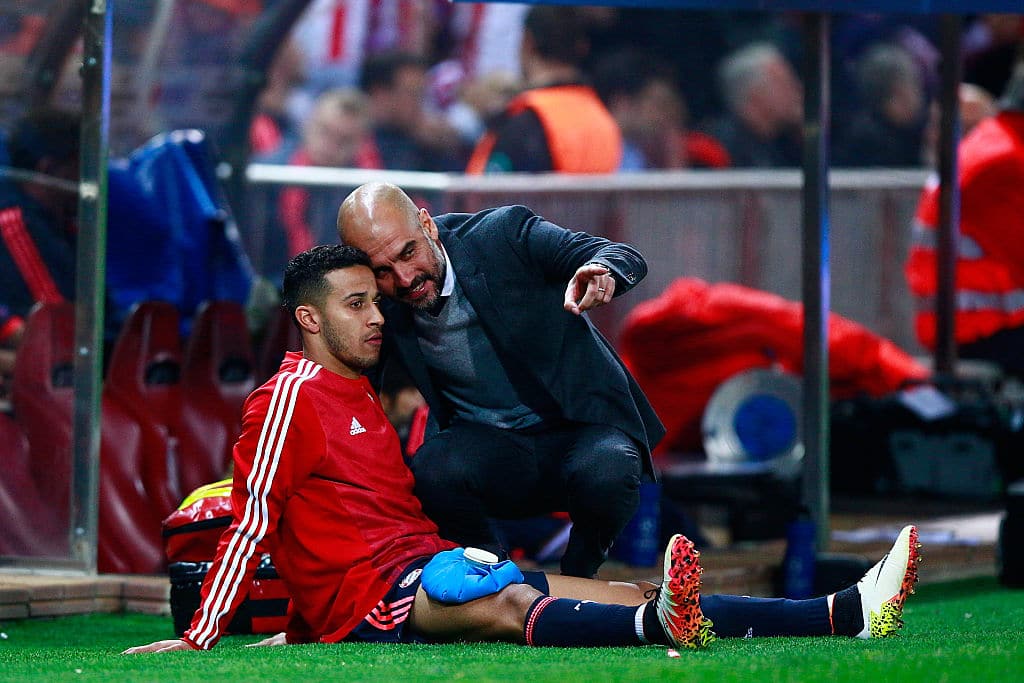 Thiago was one of the best players when the coach led Spain to the European Under-21 Championship trophy in 2013, and scored a hat-trick in the final. His dominance throughout the tournament was significant, and talent evident, even at that young age.

Had injuries not been such a prominent feature of Thiago’s career so far, he would’ve been already fully integrated into the Spain set-up. Vicente del Bosque was also a keen admirer of the player and admitted he even considered taking an unfit Thiago to a tournament at one point, such was the uniqueness of his skillset.

It’s Guardiola who has had the biggest influence on Thiago’s career, however, and when Barça failed the player, instead choosing to stall his development, a move to Bayern, where his mentor had taken over, made perfect sense.

“Pep has always had a lot of faith in me, and me in him, so if he was still the coach then yes [I probably would have stayed],” Thiago said at the time of moving to Bayern.

Those words alone explain everything about the bond between the pair. Guardiola, too, has been effusive in his praise for the player, holding in particular high regard the versatility of the midfielder who can “cover three, four, five positions”, according to the Catalan.

Lopetegui recently moved Thiago into Sergio Busquets’ role, deep in midfield. While it may seem a world away from the No.10 position that Thiago has spent much of his career in, his skillset allows him to play the role effortlessly.

There’s long been a debate in Spain that Busquets is irreplaceable and there is simply no other player like him, but Thiago’s performances against Argentina and Italy in recent friendlies showed there is life after the underrated Barça man.

At Bayern this season he’s shown his defensive acumen too, producing 3.38 tackles per 90 on average, while also making 2.1 interceptions per 90. These numbers were perhaps unprecedented earlier in his career, with many pinning Thiago down for a more advanced role.

Unfortunately, at club level, injuries have occurred again this season, limiting his game time. When in the team he’s been impressive, though at times it’s evident a lack of rhythm hinders him. It’s perhaps why a sale can’t be completely ruled out, given Bayern’s potential frustration with the persistent niggles. He has been restricted to just 984 minutes this term, but his numbers are nothing short of excellent in those.

Thiago has made 892 passes, which puts him 13th overall amongst other Bundesliga midfielders – this comes in at 81.58 accurate passes per 90 on average and he leads this particular category. If his defensive game has progressed, then it has certainly not taken away anything on the attacking end with the player still proficient in his dribbling and key passes.

A total of 22 key passes in open play this season have been produced, which makes it 2.01 per 90 on average. One of the features of Thiago’s game since emerging that has always caught the eye is his dribbling ability, and how he drives past players. Those flashes of Brazilian flair have always been in his game, and while educated in a Spanish academy it has not been forced out of his arsenal.

Thiago is still dribbling at a rate of 1.37 successful take-ons per game, numbers impressive considering how deep he can sometimes play. Few players in that role have such an ability and it’s a useful asset to have when relieving pressure on a defence and initiating an attack.

City’s midfield, which is beginning to age rapidly, needs fresh impetus and bringing in Thiago would give exactly that. He possesses the defensive traits of Fernandinho, the drive of Yaya Touré and attacking sensibilities of David Silva. İlkay Gündoğan’s injury record has hampered his form at the club, and his dreadful performance in the Champions League against Liverpool showed he might not cut it at City. Thiago, in that same role, likely would’ve contributed significantly more to the team.

This one seems very much like a no-brainer for City. The only concerns are in regards fitness with Thiago, and beyond that everything else makes perfect sense. It’s time for Pep to make it third time a charm and reunite with his favourite pupil to keep City top of the class.