As a meeting between the Premier League's current top two, and two of the most expensively-assembled squads in football history, the upcoming Manchester derby on Sunday is the most anticipated fixture of the 2017/18 season so far.

Last season, the first time the pair met, at Old Trafford in September with Manchester City winning 2-1, all the focus was on the two managers, Pep Guardiola and José Mourinho, renewing the rivalry that burned bitterly in Spain.

But last season neither side were ready to mount a title challenge, with Manchester United finishing sixth and City in third.

That is no longer the case, though. This term the Premier League trophy appears destined for Manchester, with City the current favourites thanks to their commanding eight-point lead at the top of the table.

With the crunch encounter on the horizon, we've taken a look at some of the historical head-to-head stats that have divided these two local neighbours over the years, as well as studying the records of the managers.

Sunday's clash at Old Trafford will be the 175th Manchester derby in history. The first was played way back in 1881, when St. Mark's (who would later become Manchester City) played Newton Heath (later Manchester United). On that occasion, United ran out 3-0 winners.

And the Red Devils have have the better of the meetings between the clubs over the years, winning 72 times, with City victorious on 50 occasions and 52 of the games drawn.

United and City have met 40 times in the Premier League, with United coming out on top 20 times, City 12 times and eight draws. But the Blues have had the better of the recent exchanges, winning seven of the last 12.

The all-time highest Manchester derby scorer is Wayne Rooney, whose 11 goals in the fixture for United pip City's Franny Lee and Joe Hayes (both ten). Of the players in action on Sunday, Sergio Agüero (eight) has the most derby goals to his name.

United's most emphatic win in the fixture was a 5-0 victory at Old Trafford in 1994, courtesy of goals from Eric Cantona, Mark Hughes and an Andrei Kanchelskis hat-trick.

City's greatest winning margin in a derby – no prizes for guessing – was their historic 6-1 triumph at Old Trafford in 2011. Agüero and David Silva were both on the scoresheet that day as City matched the scoreline from a 1926 away trip to their old enemy.

This will be only the third Premier League meeting between Mourinho and Guardiola, who first crossed paths in England in September of last year.

Guardiola's City recorded a 2-1 win at Old Trafford on that day, while the return fixture finished 0-0. The Portuguese did, however, exact revenge by eliminating City from the League Cup last term.

Mourinho and Guardiola first faced off while in charge of Inter Milan and Barcelona respectively, in a 2009 Champions League group stage tie which ended 0-0 at the San Siro.

Since then they have sat on opposite sides of the dugout another 18 times. Guardiola has won eight of those games, with Mourinho coming out on top three times.

Mourinho's most famous victory over a Guardiola side was, of course, Inter's two-legged Champions League semi-final triumph over Barcelona in 2010, while Guardiola's Barça thumped Mourinho's Real Madrid 5-0 at the Camp Nou just six months later.

Comparing total trophy hauls, Mourinho still has the edge, claiming 25 pieces of silverware in a managerial career which began with an ill-fated spell in charge of Benfica in 2000.

Guardiola has won 21 honours as a coach, but he has done so having started his top-flight managerial career when he accepted the Barcelona post in 2008, meaning he has made up ground on Mourinho since then.

It is looking increasingly likely that at least one of the pair will be adding to their collection of medals come May.

José's United vs Pep's City: how the stats measure up 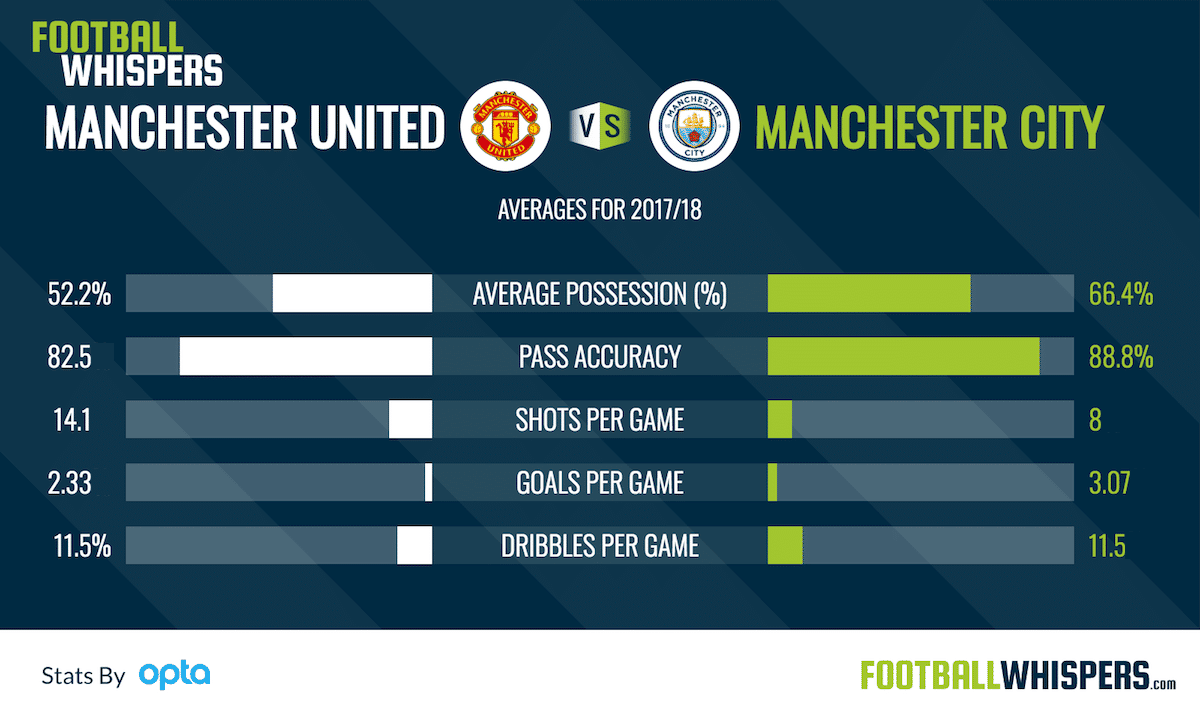 So far this term, City have been unparalleled when it comes to style and substance. Unbeaten in the Premier League and scoring for fun, if they keep up their current form, they will finish the season with 109 points and 117 goals scored – both would shatter the current Premier League records.

But United have the edge defensively, and have shown themselves capable of entertaining too, matching City for dribbles per game and ranking second in the league for goals scored. 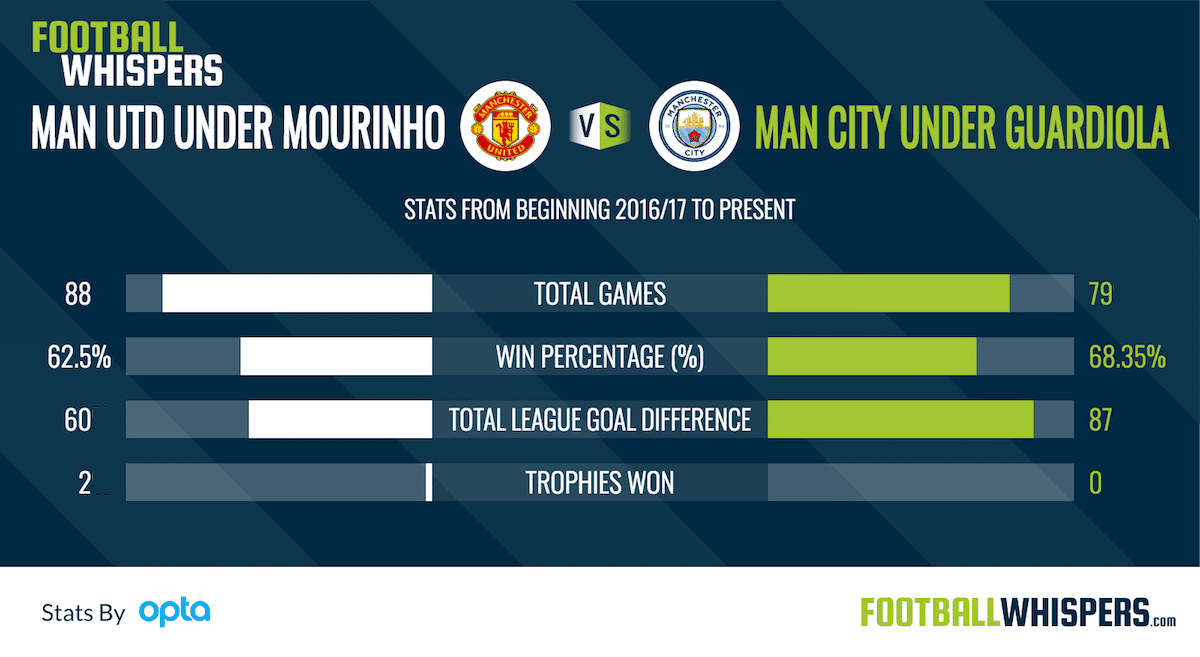 As the above graphic shows, Guardiola has the edge during his time at City when it comes to style. The Catalan tactician has gradually got his side playing an expressive, easy-on-the-eye brand of football which is evidenced by their extremely healthy goal difference.

However, the one stat that will matter most to Mourinho is ‘trophies won' and, for now at least, he still has the edge over his great rival in that category.

Our unique algorithm has predicted the United and City sides it believes are most likely to start; you can see our predicted City line-up above, while the United XI is at the top of the page.

And you can also give it a go yourself: just click ‘create your own’ on the line-ups and pick the XI players you would choose, and you can also see their stats per 90 minutes once you’ve picked them.

When you’re happy with your team, press ‘confirm' and you’ll be able to share it with your friends via social media.