Manuel Pellegrini may be known as The Engineer, but in taking the job at West Ham he has the chance to further his reputation in England as The Quiet Reformer.

The Hammers have made the Chilean their highest-paid manager in history on £7 million a year and the Irons become Pellegrini’s 13th employer of a far-reaching and varied coaching career across six countries.

The 64-year-old’s global experience across clubs from the international stature ofReal Madrid and River Plate to emerging giants like Manchester City and ambitious projects at Villarreal, Malaga and Hebei China Fortune, has covered a large spectrum of owners, players and teams.

What he encounters at West Ham is a club suffering with an identity crisis, with a poorly-assembled and ill-conceived squad and considerable discord between fans and owners. But based on his experience at City, Pellegrini could be exactly the man for the job.

He remains City’s most successful Premier League manager having won a title, two League Cups and taken them to the semi-finals of the Champions League. Each success was met with accusations of underachievement against the club’s mass spending, but history will remember him fondly at the Etihad Stadium.

Because, although the club weren’t experiencing anything close to the vitriol at the London Stadium, Pellegrini inherited a dressing room that in the Roberto Mancini-era of Carlos Tevez and Mario Balotelli made for as much tabloid fodder as it did football.

Pellegrini was calm, understated, even unremarkable in his approach yet steadied a ship that was changing course from season to season and helped eradicate the chaos that had marked many of the early years of Sheikh Mansour’s ownership.

The healing process at West Ham will take time but results will need to be secured to help it, and in a manner which brings a sense of wonder and excitement back to the club in a stadium which is yet to feel like home, only adding to the disquiet from within.

It’s a sizeable job and perhaps one that goes some way in justifying Pellegrini’s considerable salary. It’s also far from straightforward because, on the face of it, West Ham’s ceiling isn’t that far beyond what David Moyes achieved.

The Scot led the Hammers to a rather lofty 13th, given the misery at the start of the season, and they were only 12 points behind seventh-placed Burnley which, barring a spectacular collapse by Roman Abramovich’s relationship with the Home Office further deteriorating, is as high as they should be aiming for.

In terms of overall approach, Pellegrini has shown a constant commitment to a flat-back four. From his days in La Liga at Villarreal, Malaga, Real Madrid and through to City. At it’s best it offers familiarity and security but it’s also led to accusations of predictability and being a tactical luddite.

A traditional 4-4-2 has often been his formation of choice, with an emphasis on a ball-winning defensive midfielder: Marcos Senna at Villarreal, Fernando Gago or Lass Diarra during his brief Bernabeu stint, Jeremy Toulalan at Malaga and Yaya Toure (when he could run and bother to track opposition runners) at City.

As he famously said of his time at Madrid, also working with a badly-misshapen squad: “I can’t get anything out of an orchestra if I have the 10 best guitarists but I don’t have a pianist or a drummer.”

Balance is of the utmost importance to The Engineer as he’s a firmly a round-pegs-in-round-holes-kind of coach who lets the individuals play in their best positions.

But that core belief has allowed his artists to impress as Pellegrini has worked with some of the finest playmakers of the 21st century: David Silva.

He may be a coach who demands structure and organisation but he isn’t one to just lean on the orthodox. That should excite Hammers fans tired of the stoic and stale approach of Moyes.

How West Ham’s squad fits into his ideology varies quite dramatically and there is sure to be considerable transfer activity in east London as significant surgery is needed.

One probably beneficiary of this appointment is Manuel Lanzini. The Argentine suffered an injury-plagued and intermittent 2017/18 where he was unable to repeat his performances of the previous season where he was named Players’ Player of the Year. 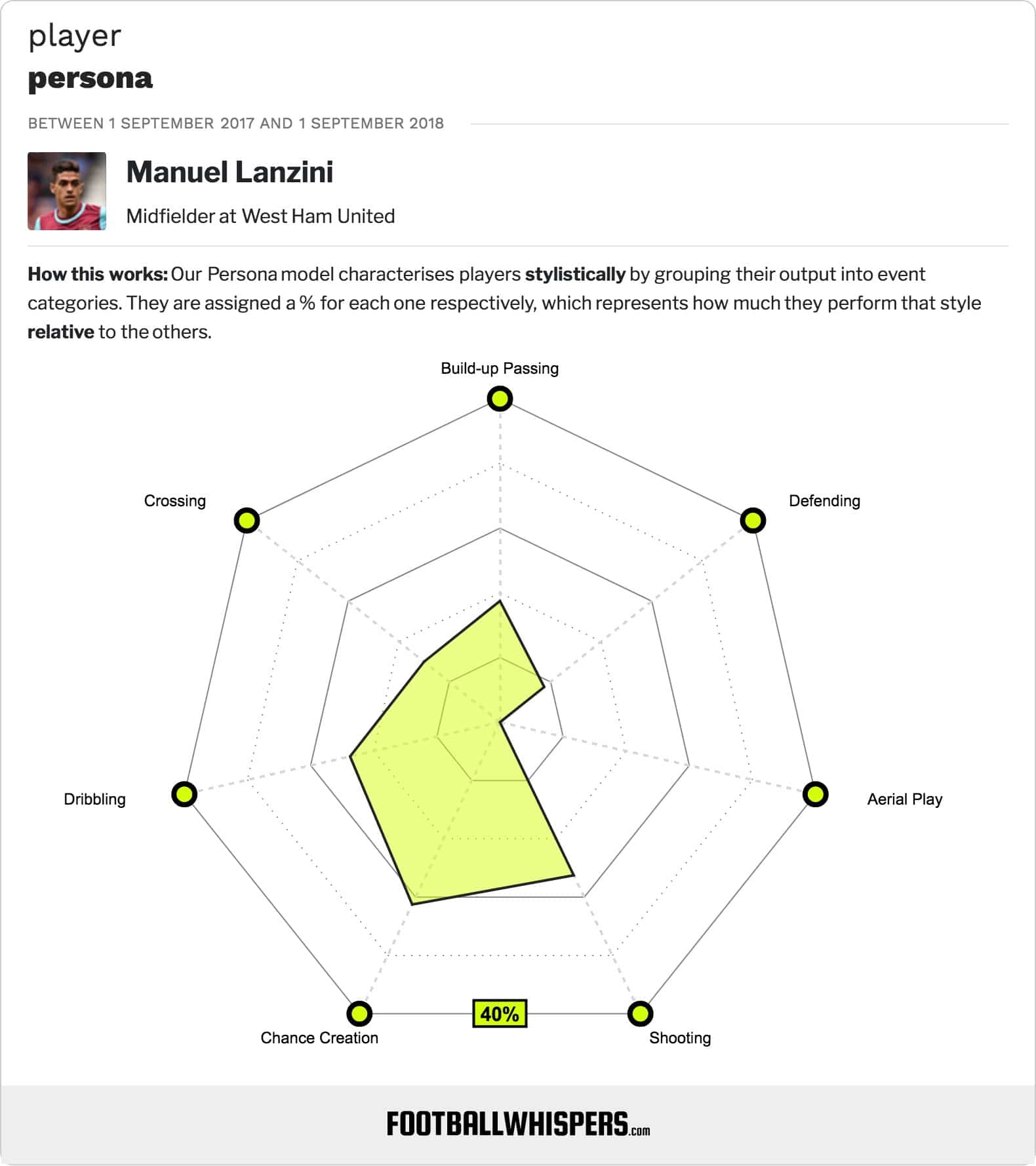 But providing he remains fit and assuming Pellegrini likes what the Argentine can provide which, at his best, is approaching top-four quality, he should prosper under his watch.

Pellegrini’s previous faith in pure penalty box strikers such as Diego Forlan, Javier Hernandez afforded more gametime in a formation that would make greater use of his talents.

Hernandez finished the season as a striker ranked 65th in the division for 3.55 touches per 90 in the opposition penalty area (4.61 the previous season in the Bundesliga) and 87th for his 1.69 total scoring attempts (2.57 at Leverkusen in 2016/17, during a period where he didn’t exactly excel at the BayArena).

Based on what they already have, a Marko Arnautovic-Javier Hernandez front two would be the obvious pairing but with the Hammers also reportedly interested inDavie Selke of Hertha Berlin and West Brom’s Salomon Rondon, having worked with the Venezuelan at Malaga, this may well change.

He has never placed great emphasis on  his full-backs as offensive assets preferring stability over spectacular gallops forwards, and one Hammer will already know that in Pablo Zabaleta; so what he does with Arthur Masuaku will be intriguing as the Congolese is a potential matchwinner yet may be more suited as a left-sided midfielder.

Finding a dominating defensive anchorman will be integral to his approach with the Hammers 13th for ball recoveries in their own final third (62.69) under Moyes and, as per Understat.com, they were 18th for opposition passed allowed within 20 yards of their goal (308); again, only Stoke (315) and Bournemouth (339) were below them.

The Hammers were also 18th for average possession duration of opponent per 90 at 11.67 passes, beaten only by rock bottom West Brom (11.72) and relegated Swansea (12.63) for their charity. 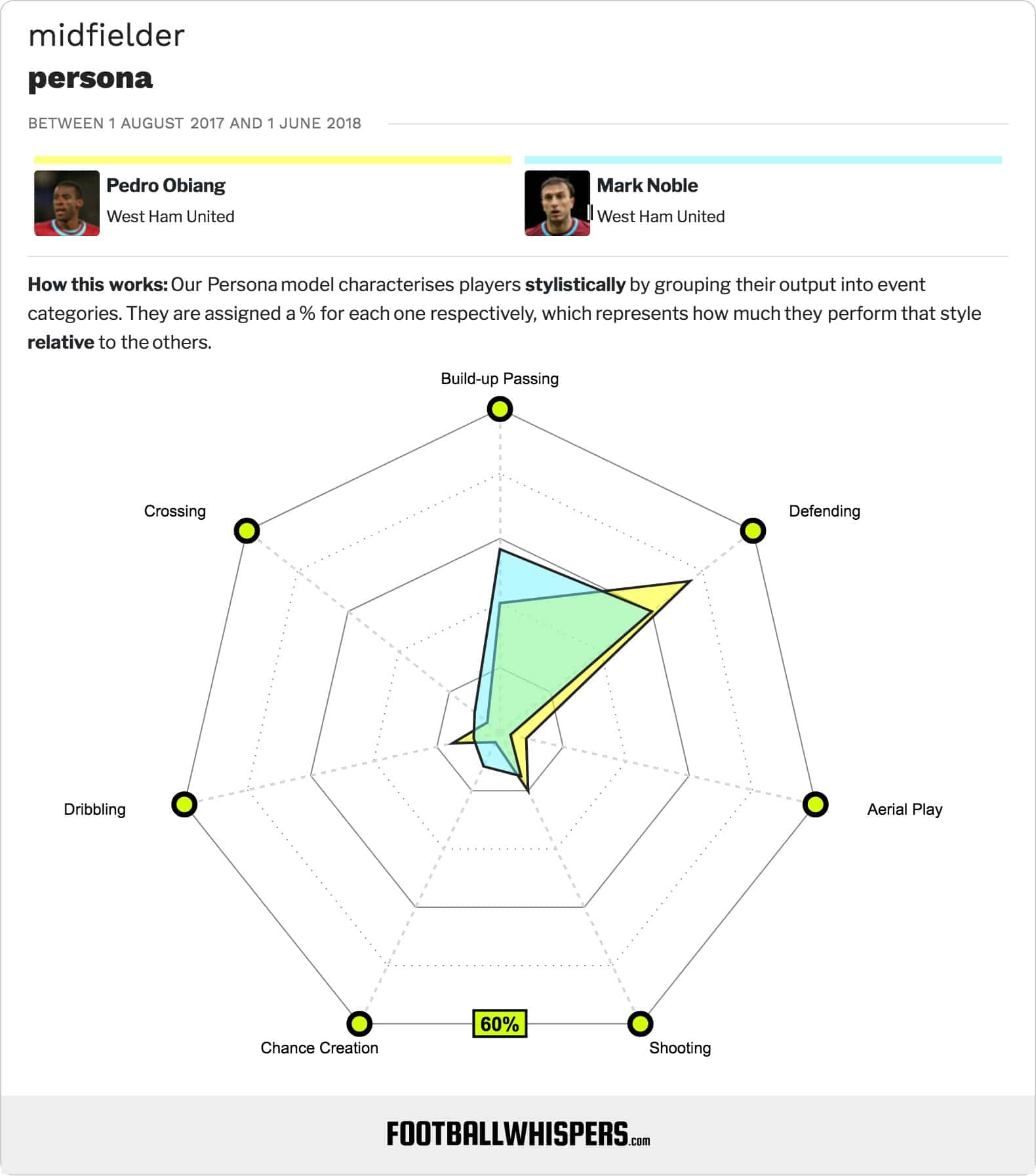 It remains to be seen whether Cheikhou Kouyate, so beloved by Moyes, or fans favourite Mark Noble can become that figure. Although their work rate will surely be appreciated. among Premier League midfielders for tackles per game with 3.05 – may also endear him to his new manager.

It should be also emphasised that finding a goalkeeper is imperative and even Joe Hart’s familiarity with the Chilean is unlikely to earn him a long-term deal.

That is just one of many major jobs waiting for Pellegrini in his in-tray, but he should have resources beyond many of his rivals, is at a club that remains an appealing transfer destination and has shown himself to be a manager committed to more than just quick-fix solutions to long-term problems.

As he said upon taking over at Malaga in 2010: “I’m not interested in external ego but internal satisfaction. I’m not interested just in easy glory but in constructing something. Together we are trying to build a project that is not just short term.”