Once upon a time, there was a belief that Brazilians couldn't hack it in the Premier League.

Those pesky South Americans, according to yer da's mate, weren't built for the muck-and-bullets of the English game.

While that's always been a disturbingly reductive view, in 2019, it has never seemed so far from the truth.

Look at the Premier League's top sides; they all have a Brazilian fulfilling his potential. Manchester City have Ederson, Gabriel Jesus and Fernandinho.

The Kop has, at this stage, effectively anointed Alisson, Fabinho and Roberto Firmino as one of their own. David Luiz and Willian have well over 500 games between them for Chelsea, while Lucas Moura has impressed at Tottenham.

Manchester United, however, have never found their Samba star. Kléberson, the first Brazilian to represent the Red Devils, flopped badly after his move in 2003. Anderson, tagged as a future superstar at Porto, never lived up to his potential. The twins, Rafael and Fabio da Silva, were tipped for big careers at Old Trafford but were sold in 2014 and 2015 respectively.

Some United fans will also remember hearing about Rodrigo Possebon. The midfielder was last seen playing his football in Vietnam.

The current Brazilian contingent at United haven't exactly pulled up trees, either. Fred, last summer's £52million marquee signing from Shakhtar Donetsk, is straying dangerously close to being considered one of the club's worst-ever signings.

Then there's Andreas Pereira, the Belgian-born Brazilian whose stunning strike against Southampton remains the sole highlight of an underwhelming time at the club.

But United are intent on finding their seleção star, with reports this week claiming they are eyeing up a deal for Fluminense striker Pedro Guilherme Abreu dos Santos (just Pedro to us).

Let's get one thing cleared up, though; he is not to be confused with Fluminense wonderkid João Pedro, who will join Watford when he turns 18 in 2020.

No, this is the Pedro who was reportedly close to joining Real Madrid last summer before a cruciate knee injury scuppered the deal. And while the Spanish giants may yet revive their interest in the 21-year-old, United have, according to Brazilian outlet Globo Esporte, contacted Fluminense over his potential availability.

While a deal is possible, Flu will not sell the player until after their presidential election, which takes place on June 8.

Real Madrid's apparent interest coupled with his call-up to the Brazil national team last August (injury saw him replaced by Richarlison) would appear to suggest that he has great potential, but is he the right man for United?

Pedro has spent his entire professional career with Flu, making his senior debut in 2016. After showing his goalscoring prowess during the 2017 season, he fully established himself at the Maracanã in 2018, netting 19 times in 37 appearances.

His exploits last year attracted the interest of Real before a torn ACL shattered the potential of negotiating a deal. An injury of that nature can be devastating for a young player but he has shown impressive resilience since returning to action in April, scoring in the recent league games against Santos and Grêmio.

An effective target man (he stands at 6ft 1in) with sound technical skills, Pedro does his best work inside the penalty box. His predatory instincts allow him to take up great positions and pounce on crosses, loose balls and deflections.

He's capable of scoring a variety of goals, too. His most recent strike was a nervelessly dispatched penalty against Grêmio after having nodded home a close-range header against Santos. Shortly before his injury, his winner against Defensor Sporting was a delightfully executed dinked finish over the onrushing goalkeeper. A week prior, he could be found curling a brilliant 25-yarder into the top corner against Bahia.

Pedro looks like the natural goalscorer United need. There are doubts over Romelu Lukaku's long-term future while Marcus Rashford, although clearly talented, is more of a streaky player. That's not to say scoring 25-30 goals is beyond the young England international, but having an accomplished marksman in the squad can end up being motivation for United's No.10 to raise his game. 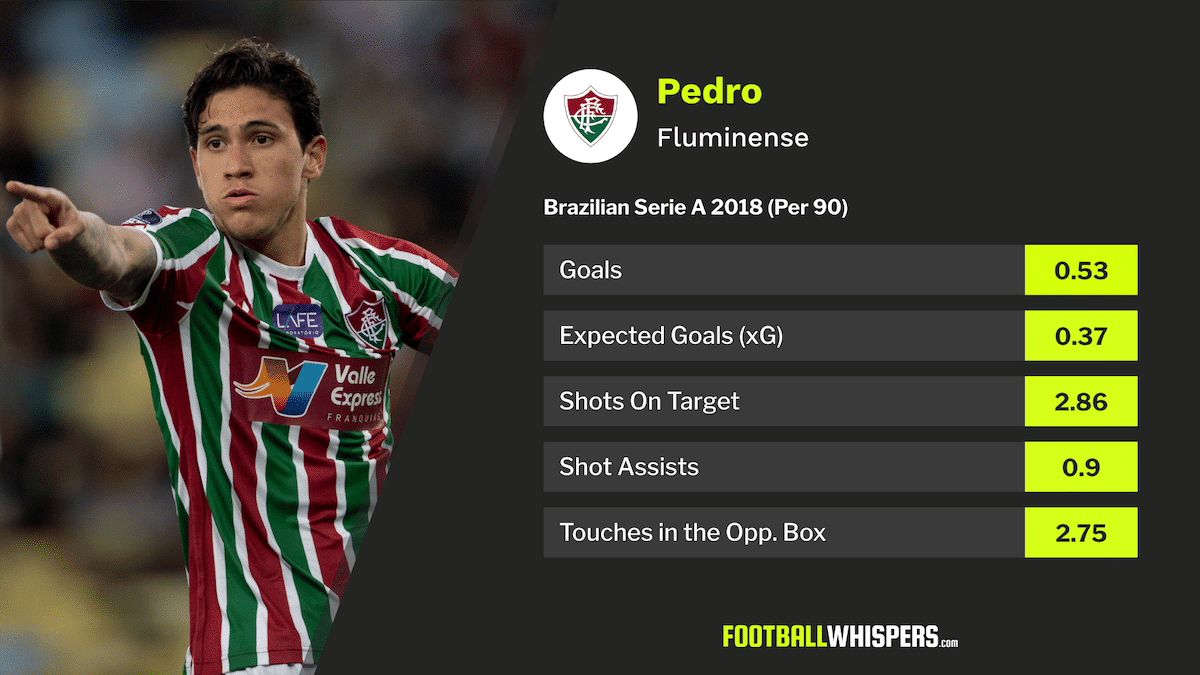 But make no mistake; finding the net is his remit. Given United's struggles during the latter stages of the season, he certainly seems like a player who can add a different dimension to the attack; a player who doesn't stray too far from the opponent's penalty area, a spearhead, a focal point.

The presence United have missed since Zlatan Ibrahimović and the razor-sharp goal-getter fans have longed for since Javier Hernández left.

Pedro would reportedly cost around £25-30million. As a young player with an obvious eye for goal and someone United could potentially build their attack around, there is clear logic to the club's interest.

He may also be the man to break the Brazilian curse at the Theatre of Dreams. United will have to act quickly though. With Bordeaux and Inter Milan both said to be chasing his signature, he may not be available for much longer.

Get there first and they may get their Brazilian superstar after all.