Chelsea appeared to be running out of ideas. Antonio Conte's side had toiled for 65 minutes at Goodison Park against Everton but had little to show for their efforts.

Eden Hazard was being closely marked by Idrissa Gueye and Diego Costa was becoming increasing frustrated with the attention he was receiving from Ashley Williams and Phil Jagielka.

But then up stepped the little man who has scored big goals for Chelsea all season. Pedro.

The Spaniard received a pass on the edge of the area, checked back onto his left foot and curled the ball into the top corner.

It was a sumptuous goal and one that Chelsea desperately needed. The Blues went on to win the game 3-0, it's a scoreline that doesn't do the game justice.

They were shaky and nervous until their opening goal. As has often been the case this season, Pedro delivered at the right moment.

The 29-year-old doesn't have the glitz of Eden Hazard or the sheer brute force of Diego Costa, and he can be erratic during games, but the former Barcelona star has a knack for stepping up in important moments.

Look back over Pedro's goals this season in the Premier League and a trend emerges.

He struck the opener in a 4-0 win against Manchester United. The first goal in a 2-1 victory over title rivals Tottenham Hotspur.

He opened the scoring in a 3-0 success against Bournemouth on Boxing Day, and struck first away at Burnley in a 1-1 draw.

Add in his stunner at Goodison and five of Pedro's eight league goals this season have broken the deadlock. And Chelsea haven't lost any of those games. 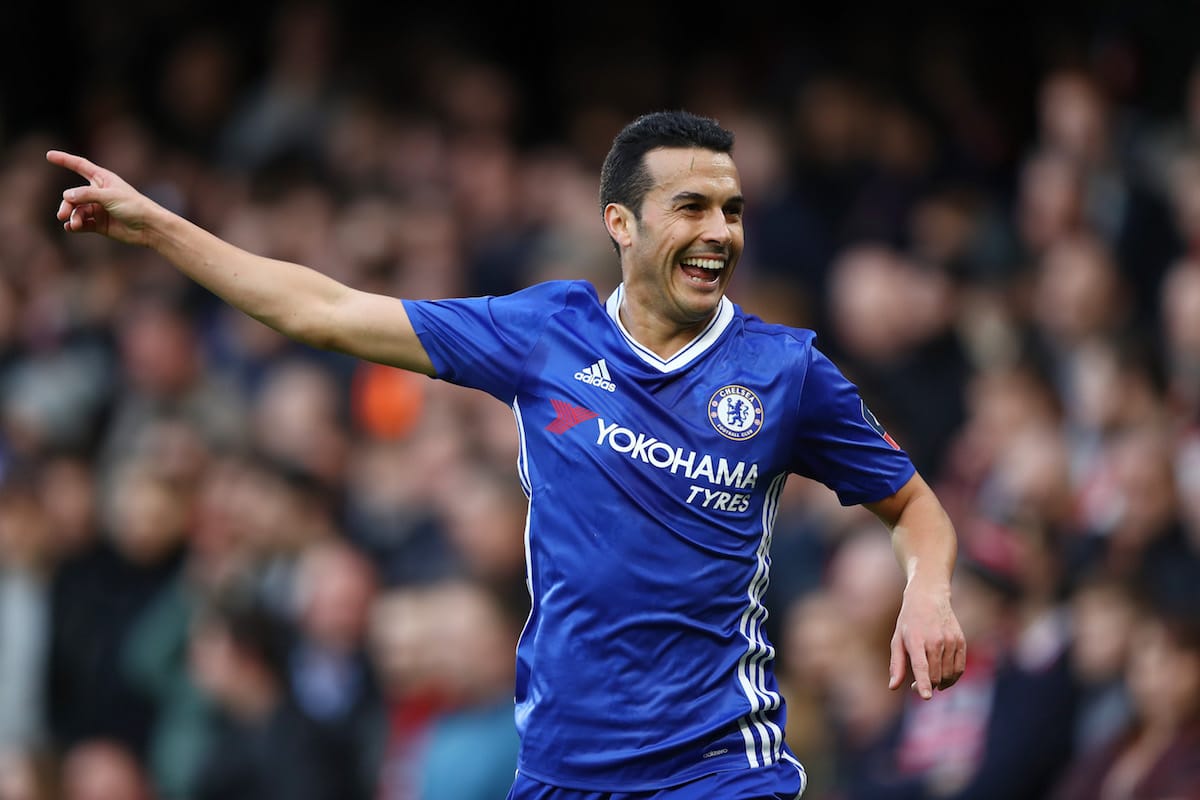 But should this be a surprise? Probably not. It's easy to forget just how effective Pedro was during his time at Barcelona.

The Tenerife-born winger was, perhaps unfairly, the sideshow for much of his stint in the Catalans' first-team.

He was competing for the spotlight at the Camp Nou with the likes of David Villa, Alexis Sanchez, Zlatan Ibrahimovic, Neymar, Luis Suarez and, of course, Leo Messi, so it's hardly surprising he didn't receive top billing.

After following Guardiola up from the Catalans' B team in 2008, Pedro slowly integrated himself into the senior side.

But it took him a season, and the departure of Samuel Eto'o, to truly make his mark in the Barcelona first-team.

The 2009/10 campaign was the Spaniard's breakthrough season. He scored 23 times and made history by becoming the first player to strike in six different club competitions.

Over the next six years Pedro's knack for scoring crucial goals developed.

He netted the first goal in the 2011 Champions League final against Manchester United, a match Barcelona would win 3-1 and the opener in a 3-0 Copa del Rey final victory over Athletic Bilbao in 2012.

And even days before he left for Chelsea in 2015, Pedro came off the bench to grab a late winner for Barca in a 5-4 victory over Sevilla in the UEFA Super Cup.

When he left for Stamford Bridge, he did so with 20 different winners' medals. Add in World Cup and European Championships victories with Spain and Pedro is one of the most decorated Spanish players of all time. 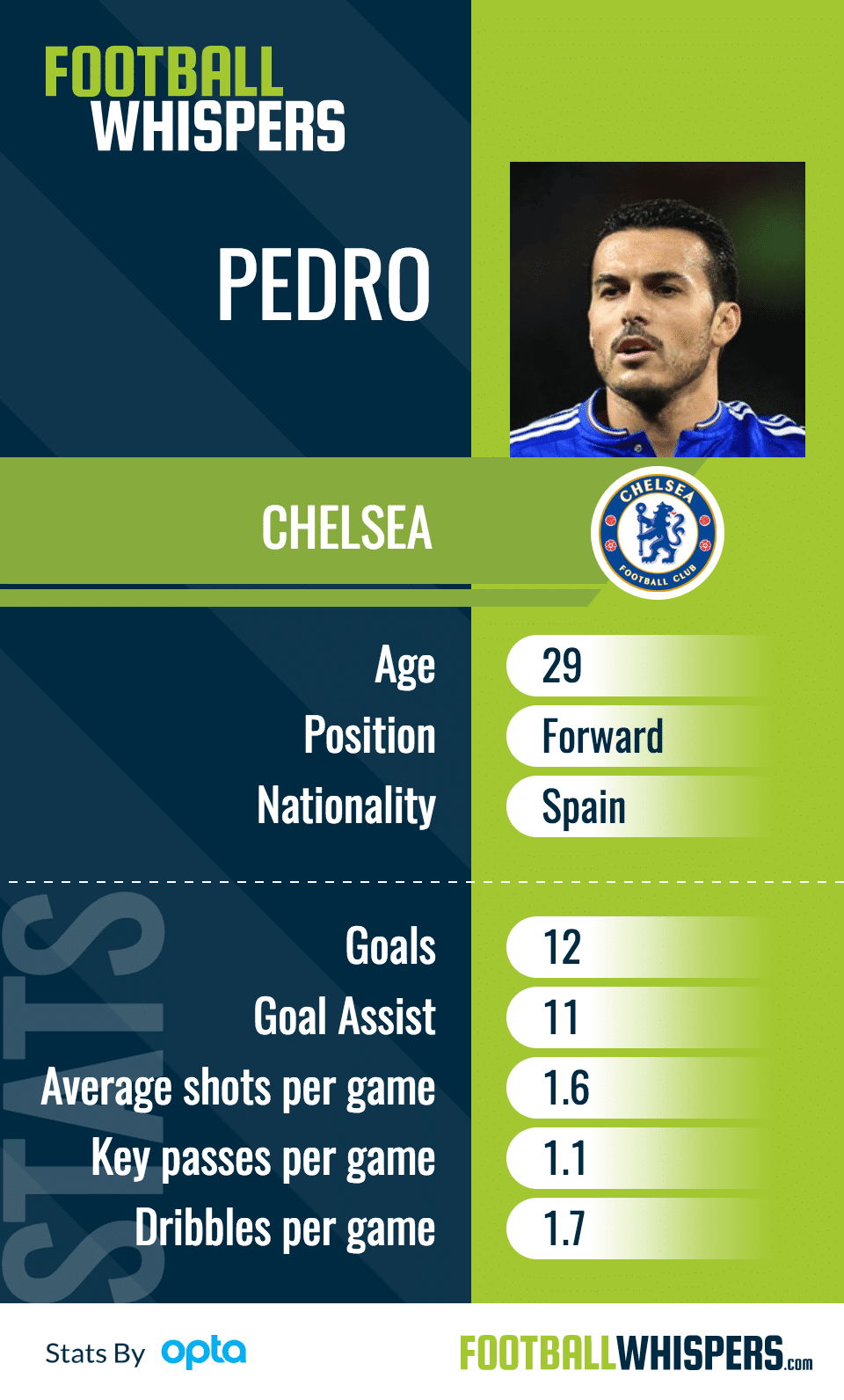 Yet his first season in England was underwhelming. After scoring on his debut, the opener, naturally, against West Bromwich Albion, Pedro, much like Chelsea, struggled through the remainder of the campaign.

The Spaniard was slow to acclimatise to the rigours of English football. He was lightweight and, surprisingly, looked off the pace in several games.

It's an old cliche that players need a season to adapt to English football but it's one that has rung true for Pedro. Under Conte he and Chelsea have slowly inched back to their best form.

“I think that all of us can see his performances and he is playing in a fantastic way,” Conte said in January.

“I think we are seeing the best of Pedro, I think that this Pedro played this type of football when he was in Barcelona.”

And it is this Pedro who looks set to add a Premier League, and maybe even an FA Cup, winners' medal to his impressive haul.