Both as a coach and a character, Maurizio Sarri is about as compelling as they come. While he might not have won anything during his time at Napoli, what he achieved there put him on a plinth with the likes of Marcelo Bielsa and Pep Guardiola as a transcendental mastermind of the modern game.

Sarri’s appointment at Chelsea provides one of the most fascinating, absorbing storylines of the 2018/19 Premier League campaign. It’s why there was such a curiosity over the Blues’ opening weekend fixture away to Huddersfield Town. Nobody really knew what to expect, but what we got was an initial hint of ‘Sarri-ball.’

There were a number of standouts for Chelsea at the John Smith Stadium on Saturday, with the midfielder partnership of Jorginho and N’Golo Kanté in particular catching the eye. Pedro was also impressive, capping the Blues’ scoring in a comprehensive 3-0 win. On this basis, and on the basis of what was witnessed in pre-season, the Spaniard is set for a big season.

At the time of his signing, Pedro’s capture from Barcelona was a real coup. Manchester United went toe-to-toe with Chelsea for the winger, with the Spaniard ultimately choosing Stamford Bridge over Old Trafford. And yet since then, Pedro has been something of a forgotten figure. At times, he has even found himself on the periphery of things.

Now, though, Sarri appears to be the manager to get the best out of Pedro. For the first time, Chelsea have a system that should, in theory, get the most out of the 31-year-old. This was evident in the opening weekend win over Huddersfield, particularly in the conversion of his goal. It was a demonstration of just how much damage Pedro can cause opposition sides.

From the moment Eden Hazard picked up the ball in the centre of the pitch, Pedro peeled further and further away from his marker down the right wing. He stretched the field, giving Hazard more space to drive into, finally giving the Belgian an option once he drew a Huddersfield defender 20 yards out from goal. The touch and finish that followed were a formality such was the space Pedro had created for himself. 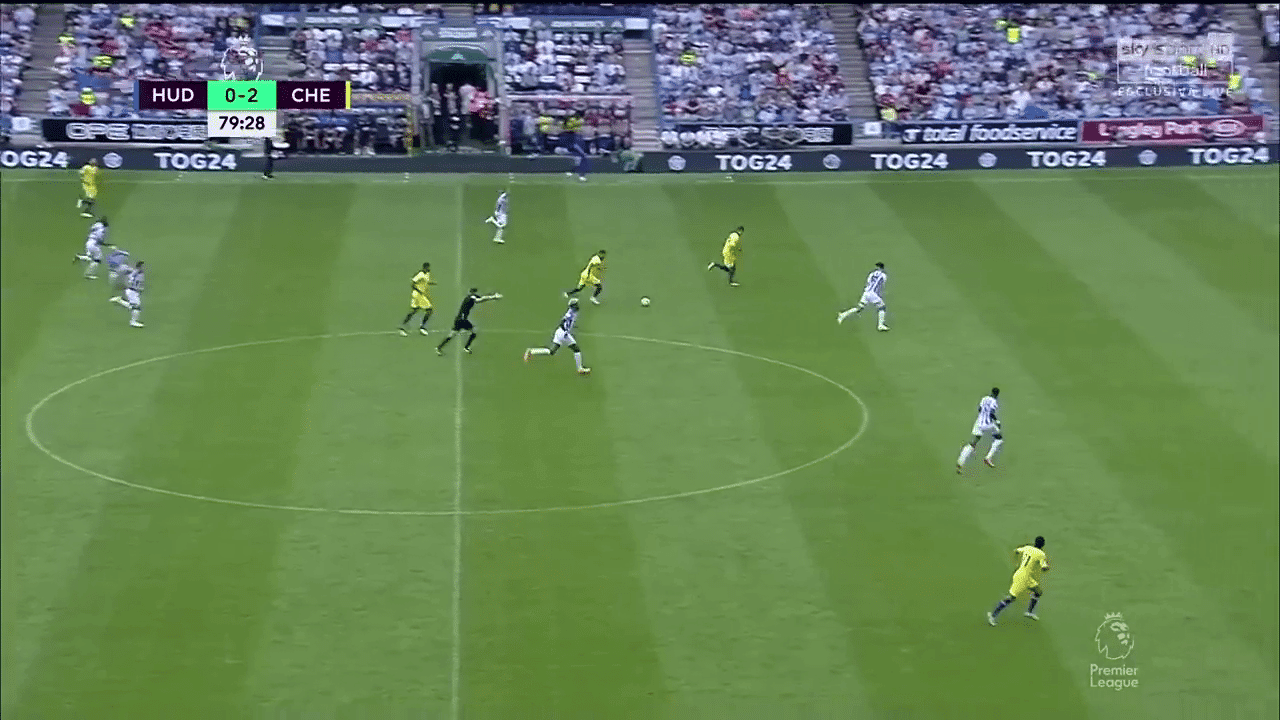 This is something of a trademark move for the 31-year-old. Chelsea haven’t seen much of it over the past three years, but Pedro was so important to Guardiola’s Barcelona side almost solely because of his propensity for staying wide.

Look at his opening goal for the Catalans against Manchester United in the 2011 Champions League final – there are similarities to the goal he scored against Huddersfield, peeling away, staying wide, proving an option for the pass and finishing. 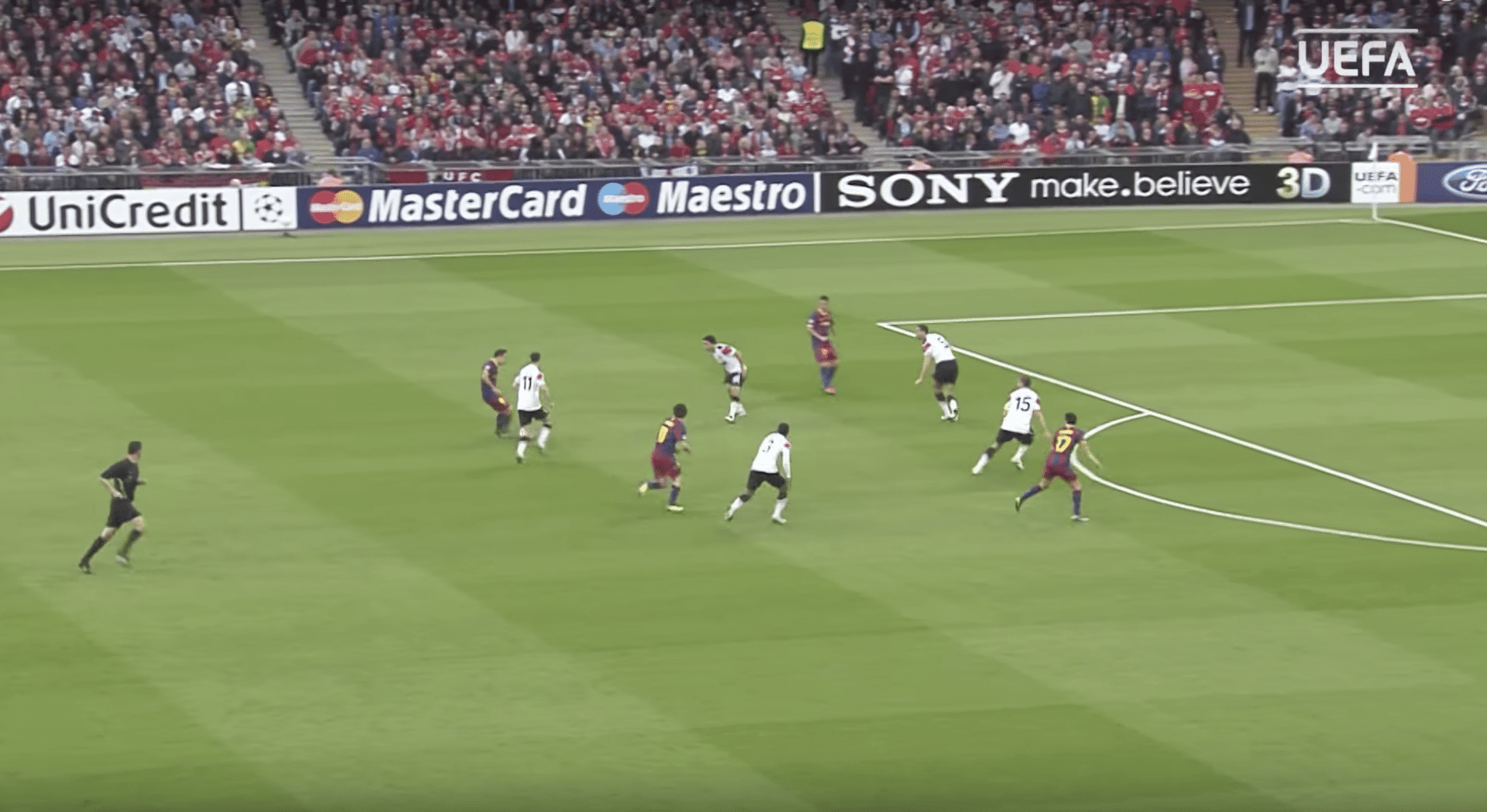 Sarri’s system is largely defined by what happens in the centre of the pitch. It’s why the Italian placed so much importance on getting Jorginho and Mateo Kovacic in through the door during the summer transfer window. But this somewhat ignores the significance of wide players in particular to his footballing ideology.

At Napoli, Sarri had Lorenzo Insigne and Dries Mertens to stretch the pitch, get in behind and pose a threat in the final third. Without them, the midfield unit would lack an outlet. It would be possession for the sake of possession. Sarri might need some time to impose this sort of ideology on this group of Chelsea players, but there are already signs of correlation.

Antonio Conte tried to use Pedro as an inside forward, asking him to cut inside and link up with the likes of Hazard and Álvaro Morata. The Spaniard can play this way, but by demanding he turn inside, leaving the space down the outside for the wing back to overlap Chelsea never quite gave Pedro the platform to show what he can really do.

With Hazard staying at Stamford Bridge for another season at least, Sarri has three or four options in the wide areas. He has the Belgian, Willian, Victor Moses and Pedro to choose from. Hazard and Willian might be the most natural picks to play on the left and right respectively, but Pedro offers something that the others don’t.

Last season’s statistics don’t quite do justice to the threat the former Barcelona winger can pose. He only averaged 0.05 big chances created per 90 minutes, although his average of 1.41 open play key passes per 90 was respectable. His total scoring attempts average of 3.3 per 90 minutes wasn’t bad either, but his goals per 90 minutes ratio of 0.23 suggests that the winger was taking shots from the wrong areas last season.

Sarri will get Pedro in better areas, as he did on opening weekend. Chelsea will be a work-in-progress this season, with the Blues likely to be competing for a top-four spot rather than a place at the top of the table. Until now, Pedro’s Chelsea career has underwhelmed. That will change this season.