Replacing Alexis Sánchez at Arsenal was never going to be an easy task, and whoever comes into replace him will have very big boots to fill.

The Chilean has been outstanding since he arrived at the Emirates from Barcelona in 2015, with 80 goals and 46 assists in 165 games, according to Transfermarkt.

But all good things come to an end and, with his contract running out at the end of the season, Sánchez is a Manchester City transfer target this January.

And the surprise name being linked to replace him in North London is Boca Juniors winger Cristian Pavón, who The Independent claim is a major Arsenal transfer target.

Pavón signed his first professional contract with Argentinian top-flight club Talleres de Córdoba aged just 16 in 2012, but got his big break two years later, moving to Buenos Aires to join Boca Juniors in a deal worth around £1million.

As soon as he joined Boca he was loaned out to Colón to gain first-team experience. The then-teenager impressed, scoring five times in 20 league games.

Since returning to Boca, he’s followed in the footsteps of the side’s long line of gifted attackers – including Juan Román Riquelme, Carlos Tévez and Diego Maradona – with a creative flair and crowd-pleasing dribbling skills.

Pavón has established himself as a fan favourite at the Bombonera in recent seasons, becoming an increasingly key figure for Boca with nine goals and ten assists last season as they were crowned Argentinean champions.

This season the 21-year-old has three goals and six assists in 12 league appearances, with his form earning him an international call-up.

What are Pavón’s main strengths?

Speaking on the World Football Index podcast, Tom Robinson said: “He’s got searing pace that will trouble any full back. He’s very direct, he’s quick, he can go outside and likes to cut inside – so that shows he’s an all round threat.

“He gets goals as well as plenty of assists and that width, pace and power can be a useful tool in any team that uses it right.

“It means a team in England could be quite well suited to him. I think he is someone who could go in and potentially make an impact in a quick, high pressing or counter attacking side even.

“He’s got a good shot from range as well. His finishing has not always been his strongest suit. He does score the odd spectacular goal cutting in from the flank. He can play on the left and use that right foot.

“He’s got a bit of everything. [Ángel] Di María is the obvious player you can compare him to, but I think he’s got slightly better decision making than Di María at times.”

In the stills below, taken from the game against Lanús, you can see just how good Pavón is with his feet. 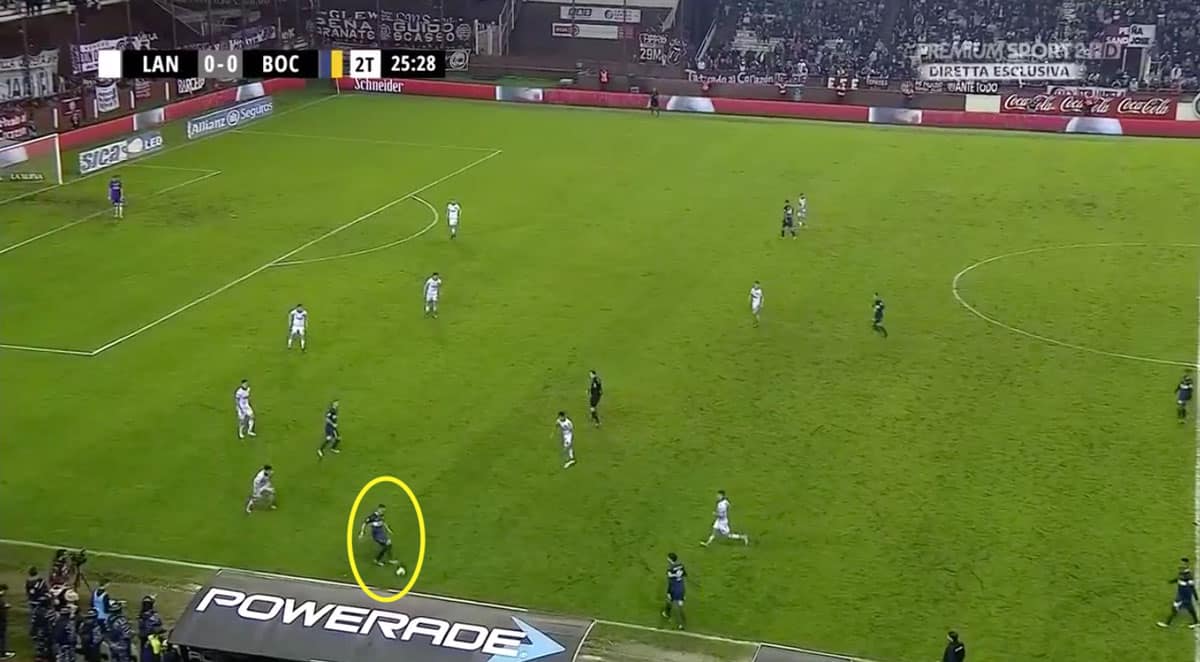 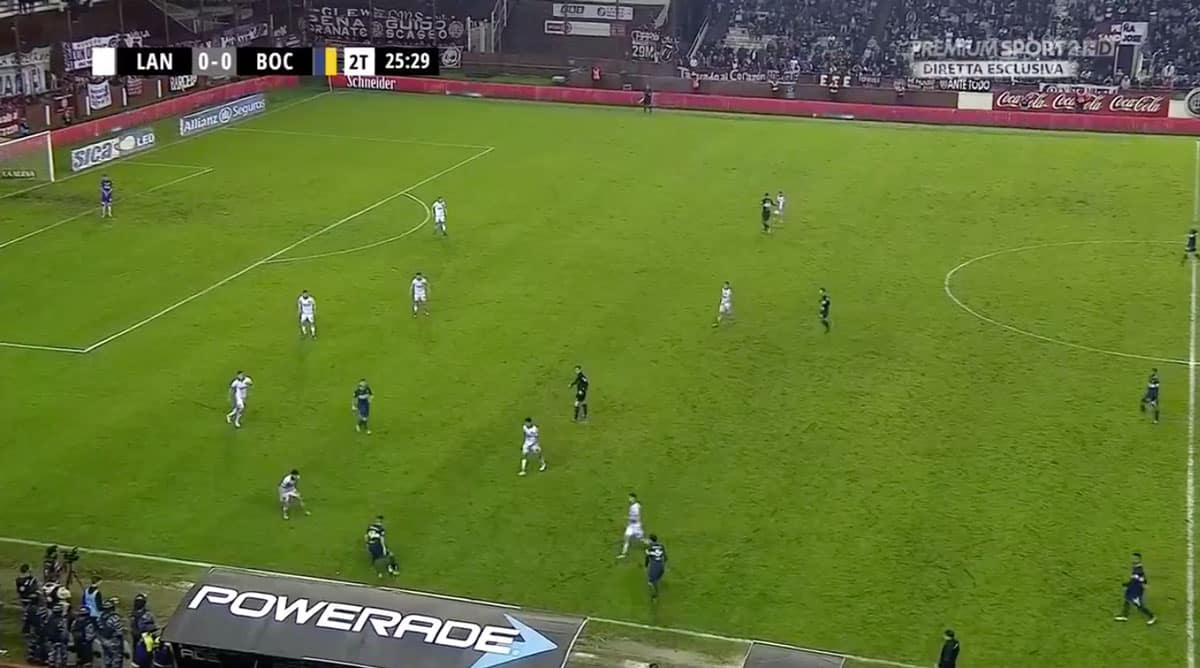 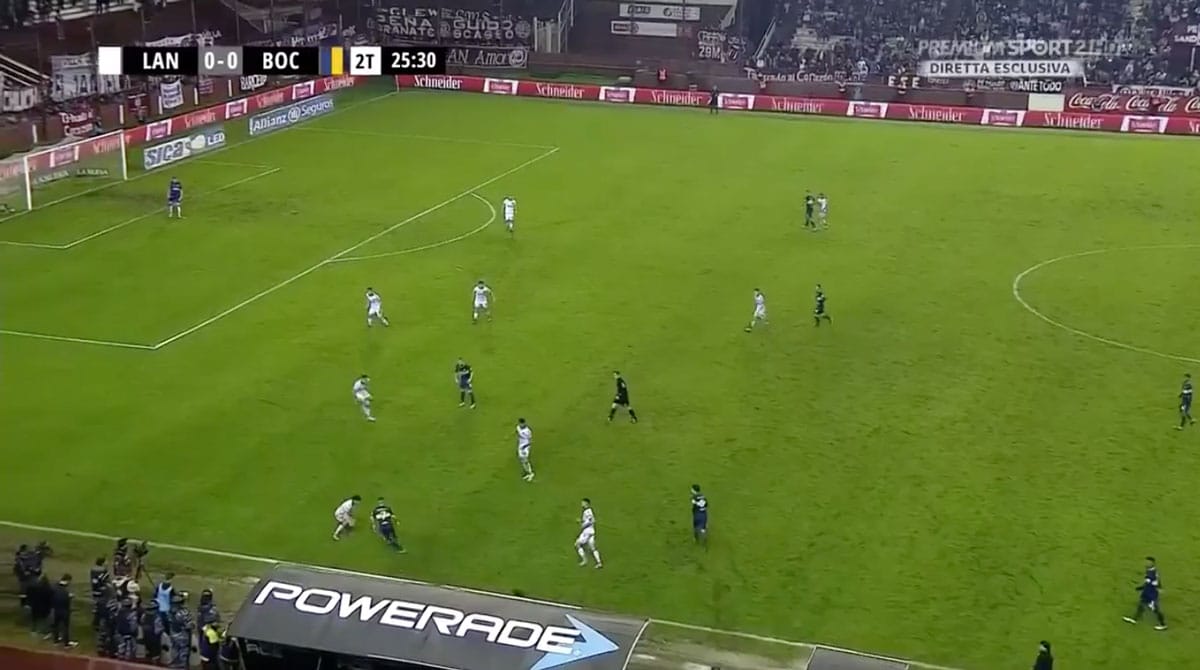 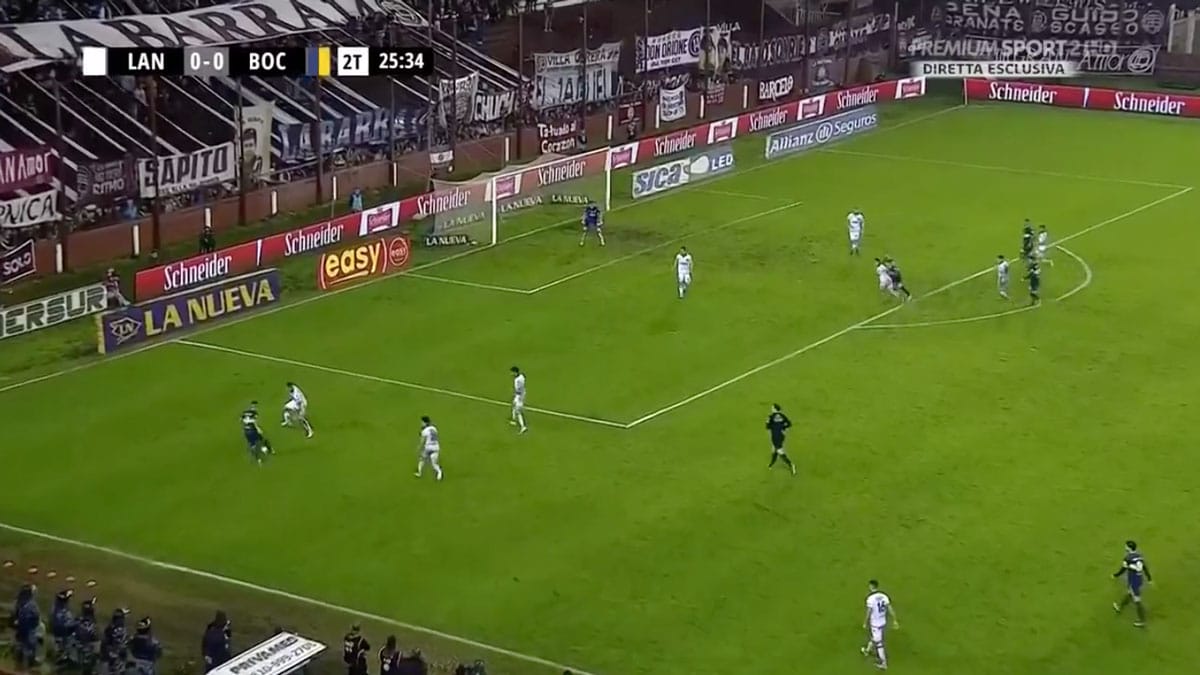 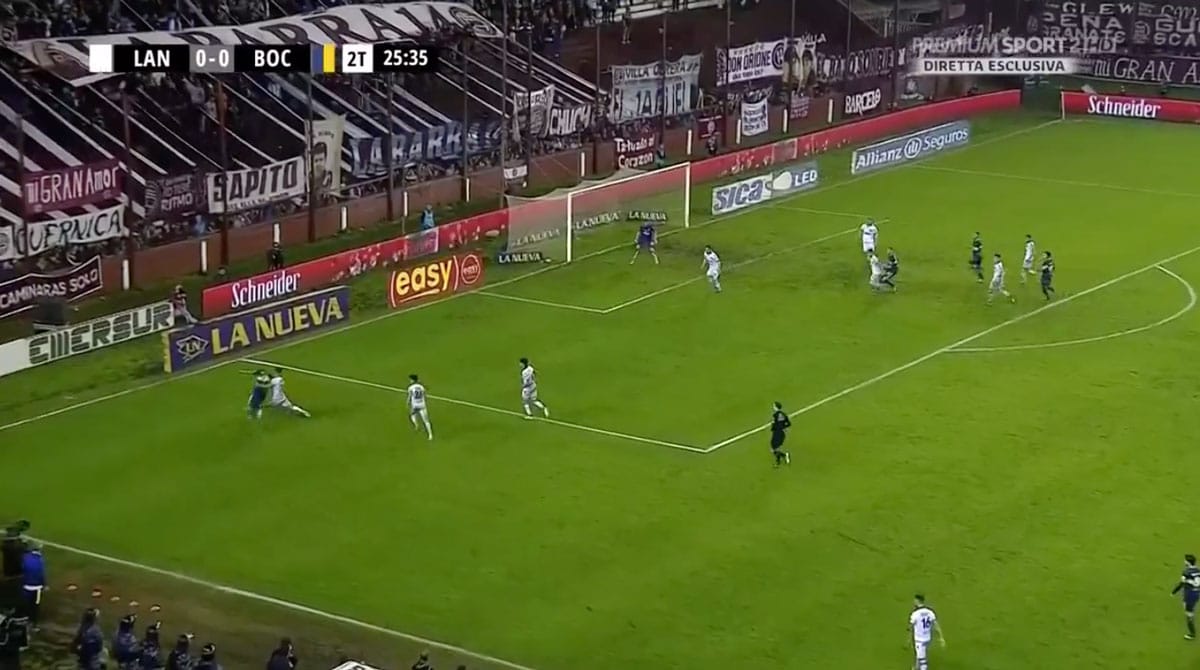 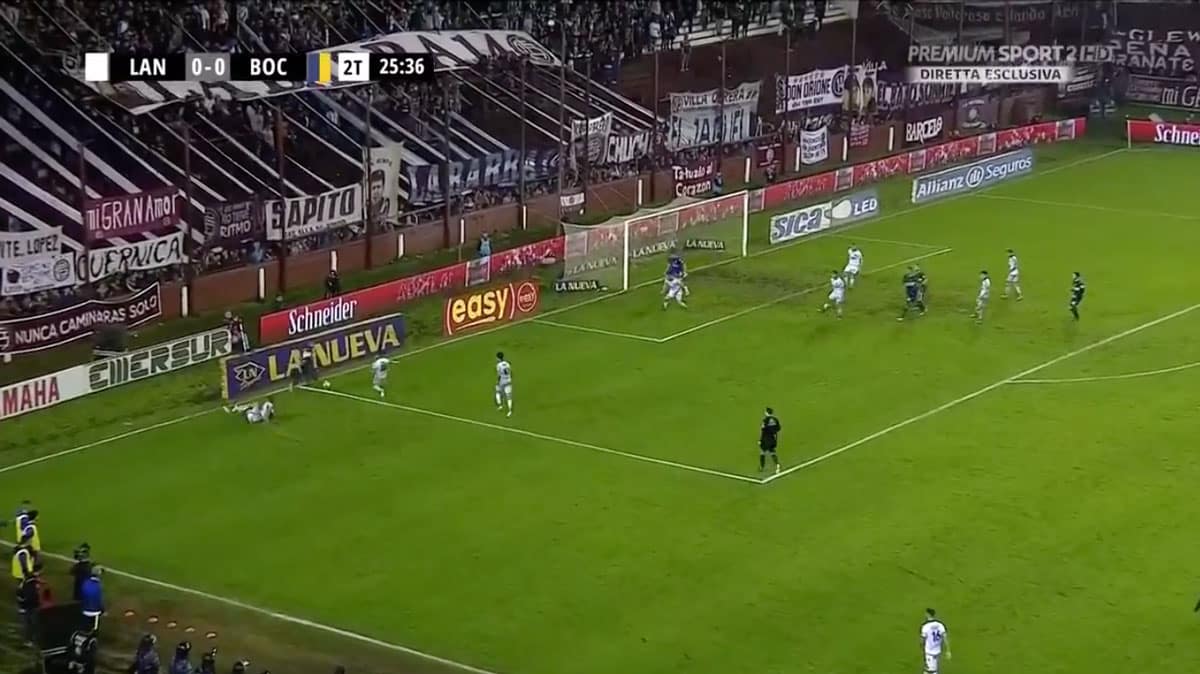 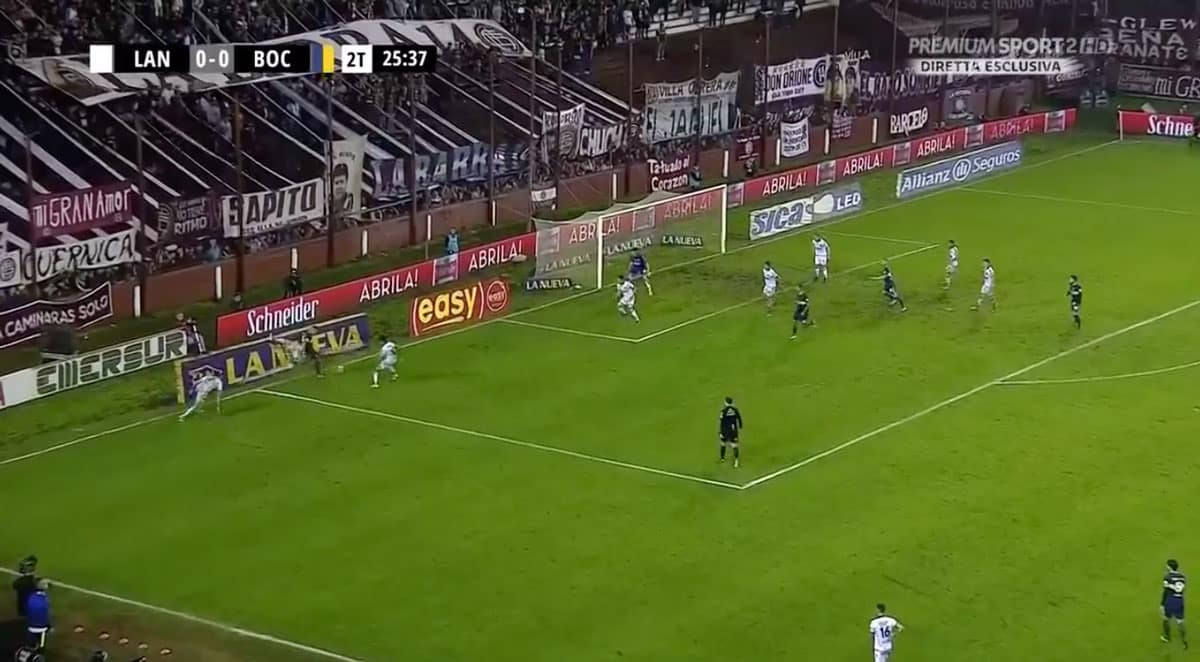 He picks the ball up on the left side of the pitch (circled in yellow), taking a touch to put it onto his right foot.

The winger then nutmegs the opposing player, using his pace to get down the line. As he approaches the box, he drags in the tackle from the defender before showing balance to get past him, leaving him on the floor.

Next up, a quick change of feet sends another Lanús player sliding off the pitch, leaving two men on the floor and Pavón in space at the edge of the penalty area. It’s the sort of dribbling ability that will leave fans of his prospective new club dribbling themselves!

He’s not all about pace and trickery, though, he also shows a good footballing brain. 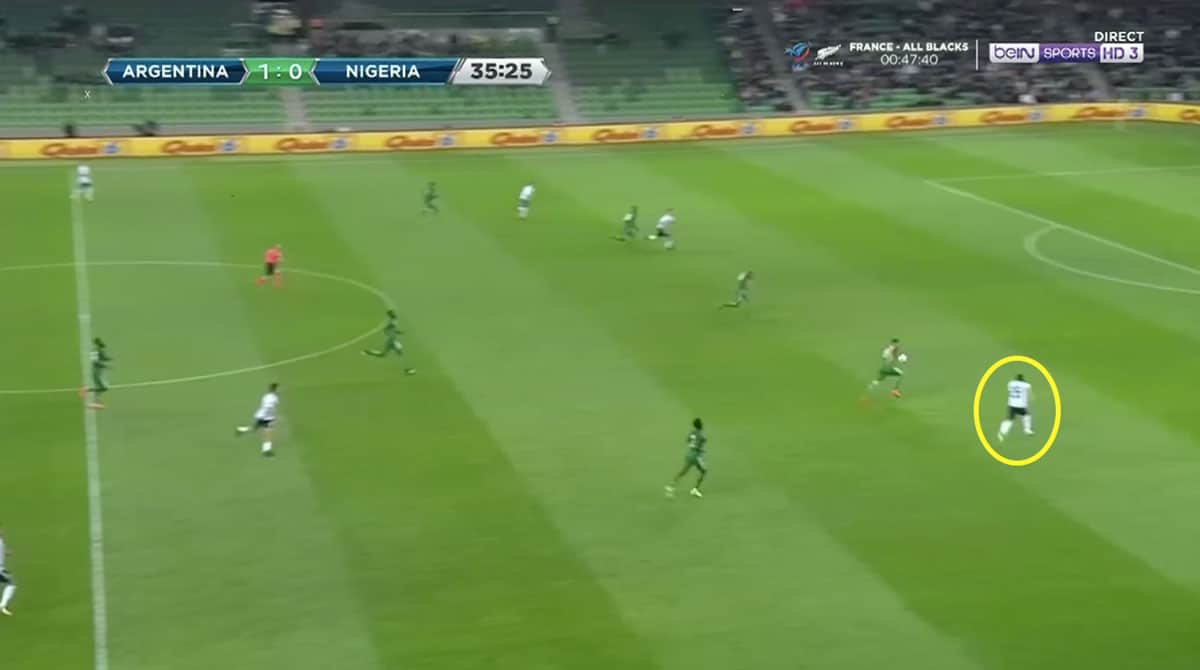 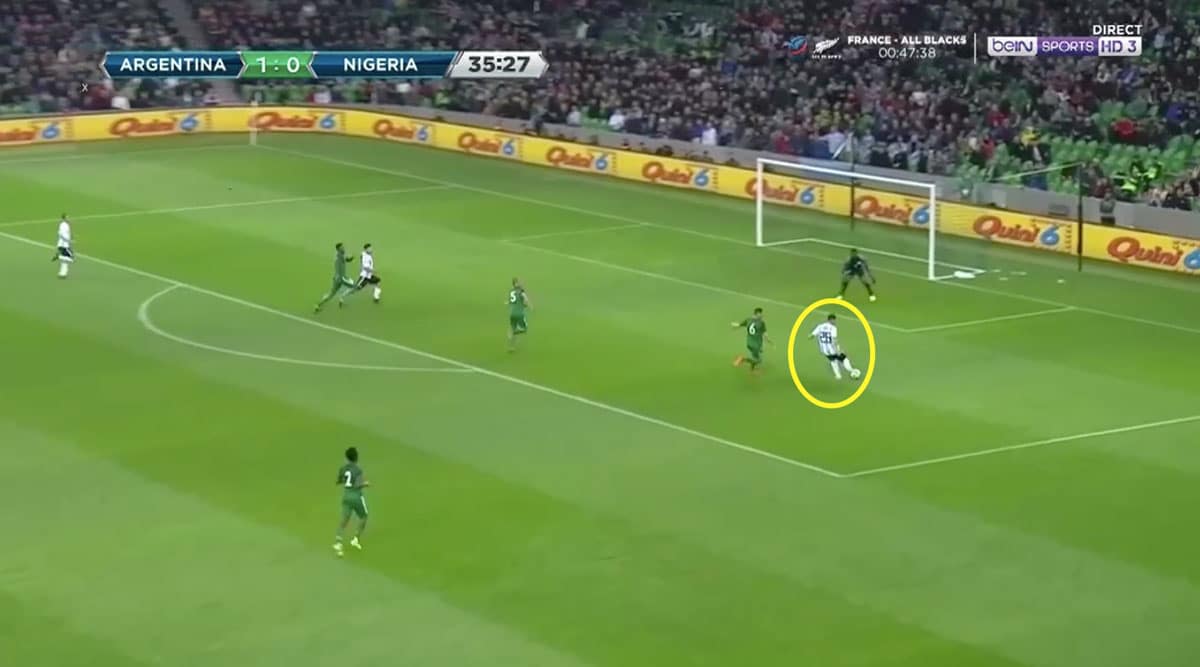 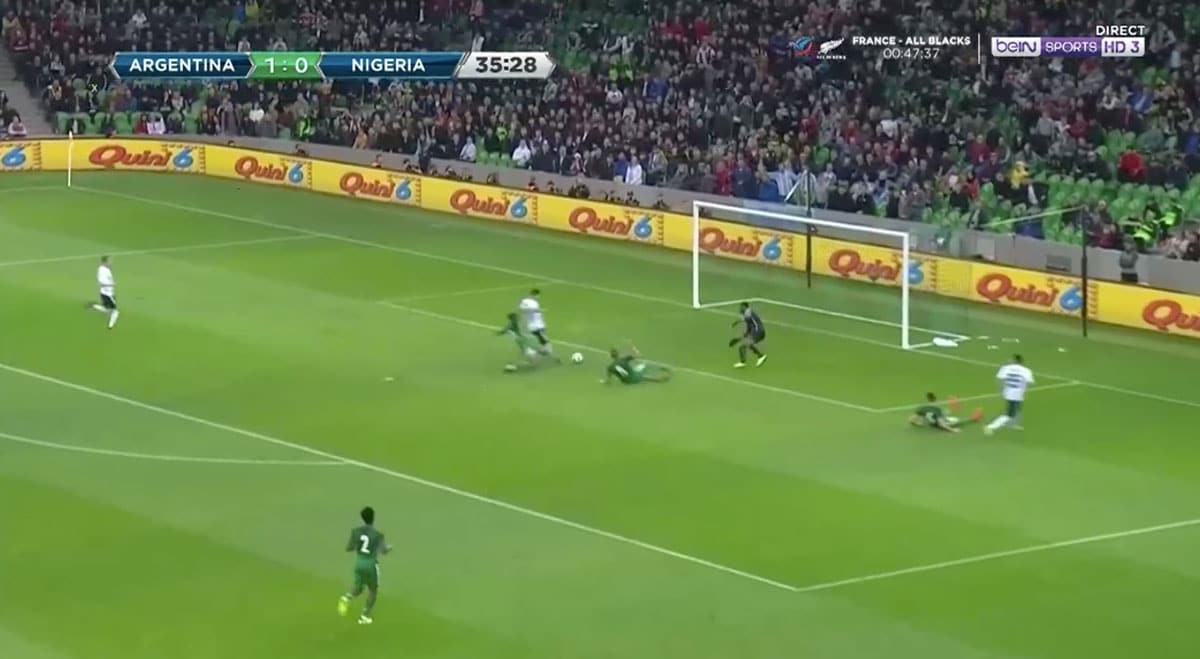 In the stills above, against Nigeria, the Argentine international makes a good run to get through on goal.

In the second still, many players would take a shot, but there is a large amount of the goal covered by the keeper.

Instead, Pavón guarantees a goal for his country by sliding the ball across to Sergio Agüero and taking the keeper out of the game. It’s selfless, putting the team above himself.

And again, his football brain can be shown in the stills below. As Lionel Messi picks up the ball, he makes a dangerous run, knowing his pace will see him get behind the defender if the Barça star goes over the top. 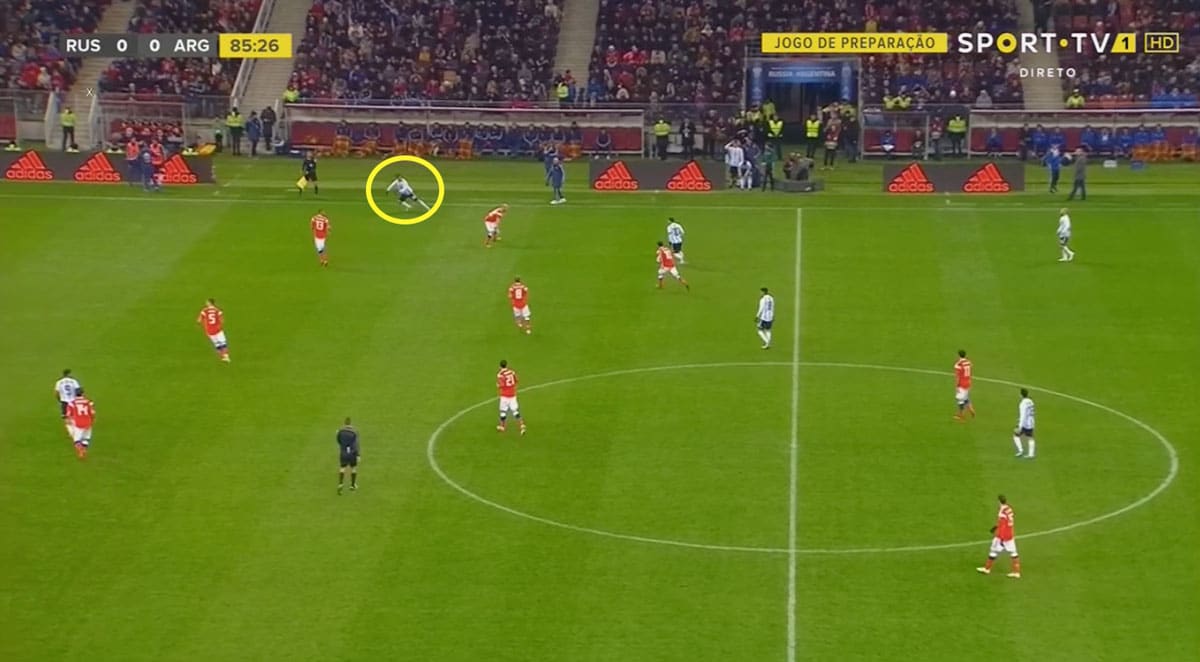 But the ball doesn’t come and he tracks back, instead, holding the line to play a neat one-two and take the defender out of the game as he’s drawn to the ball. 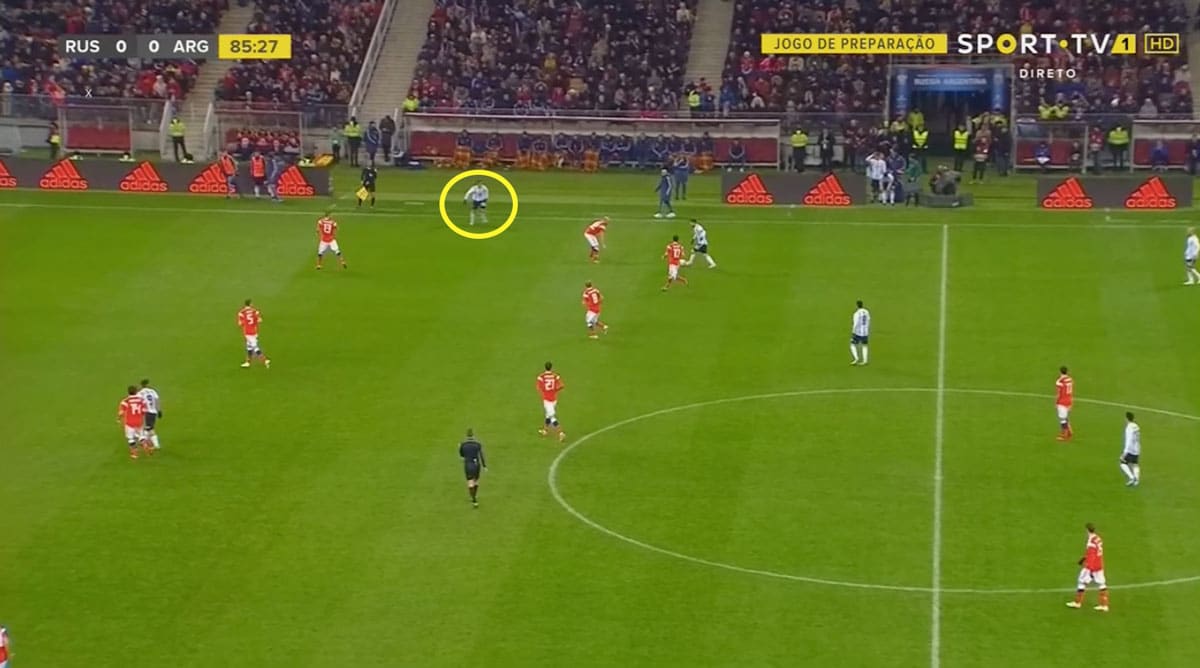 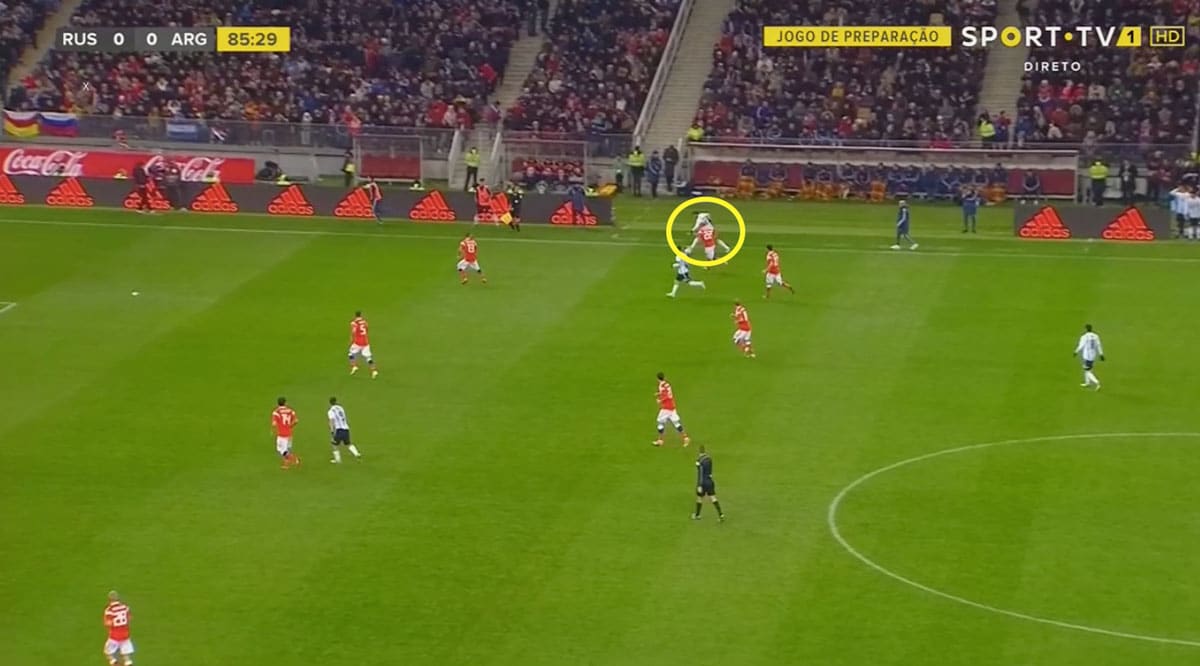 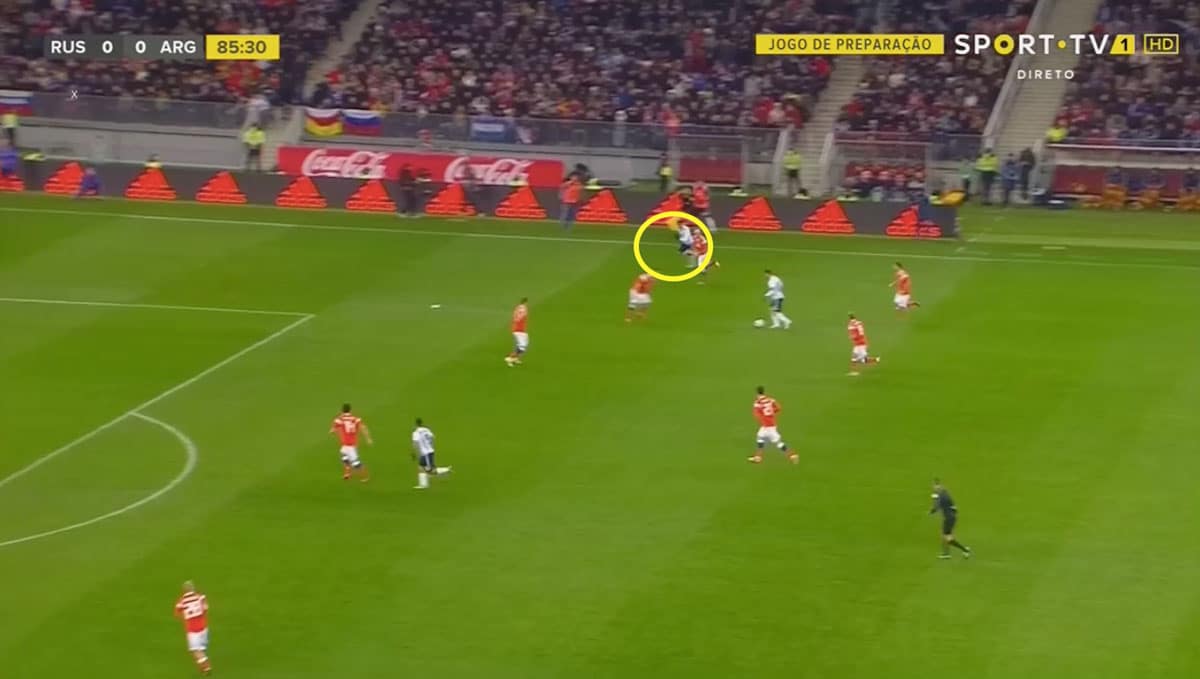 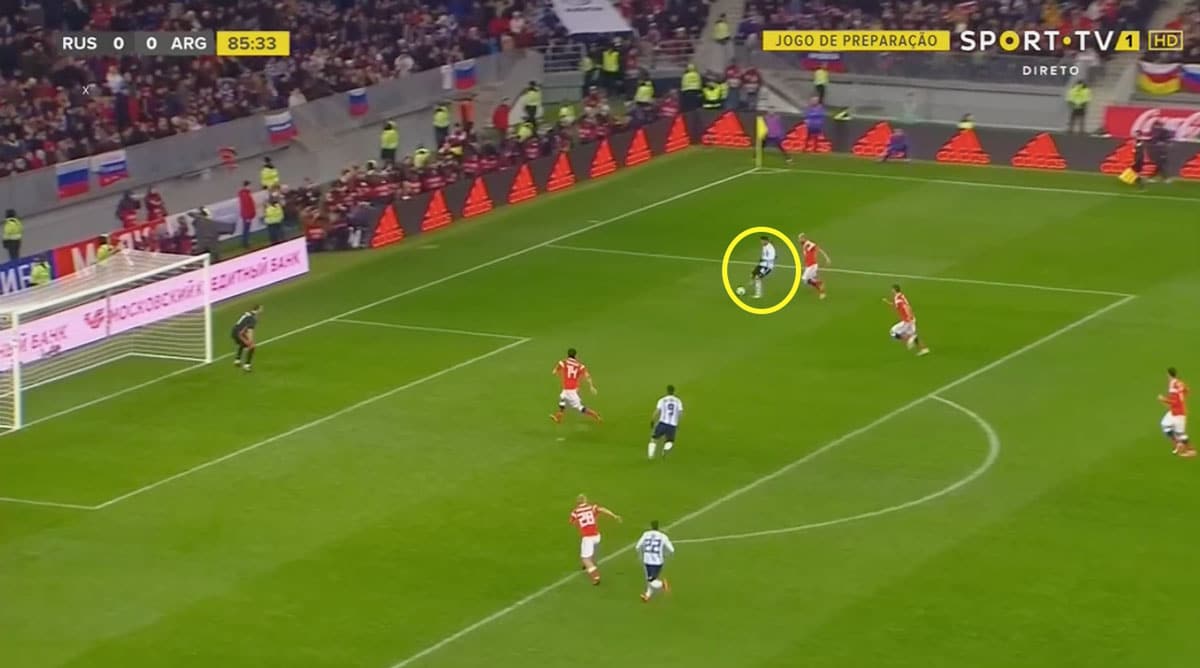 Pavón then makes the run into the space caused by the defender going to the ball, Messi finds him, and he gets to the box to put a cross that Agüero scores from.

In the stills below, with the ball on the left and not much on in the box, Pavón stays wide on the right, calling his team-mate Frank Fabra for the ball. 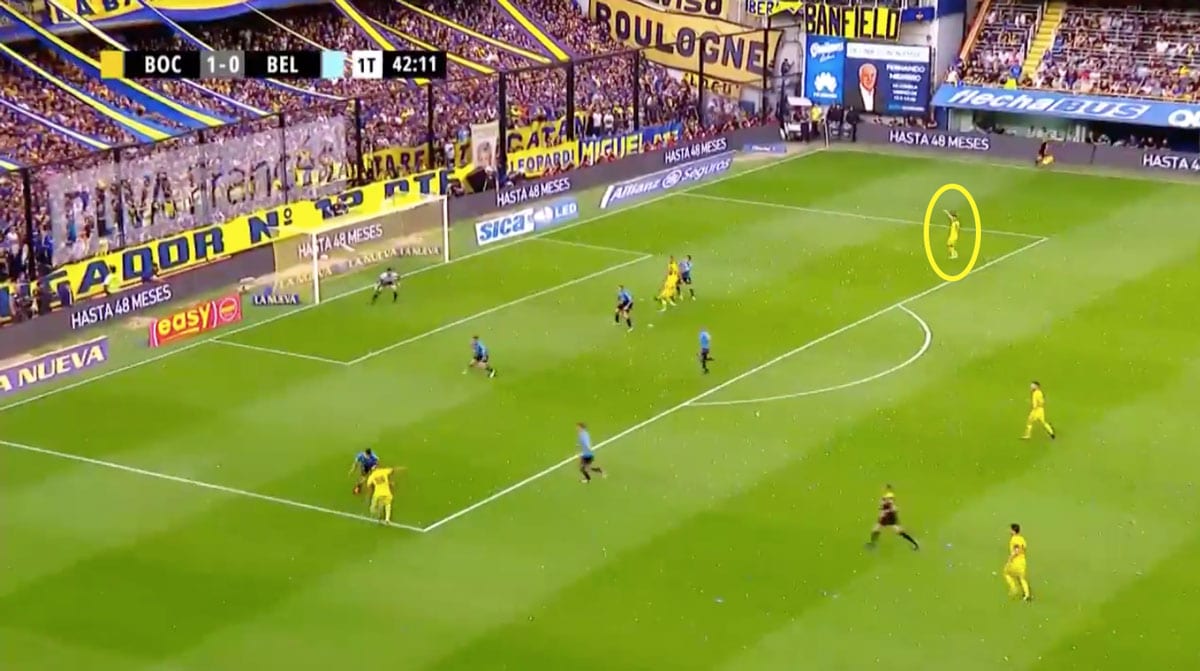 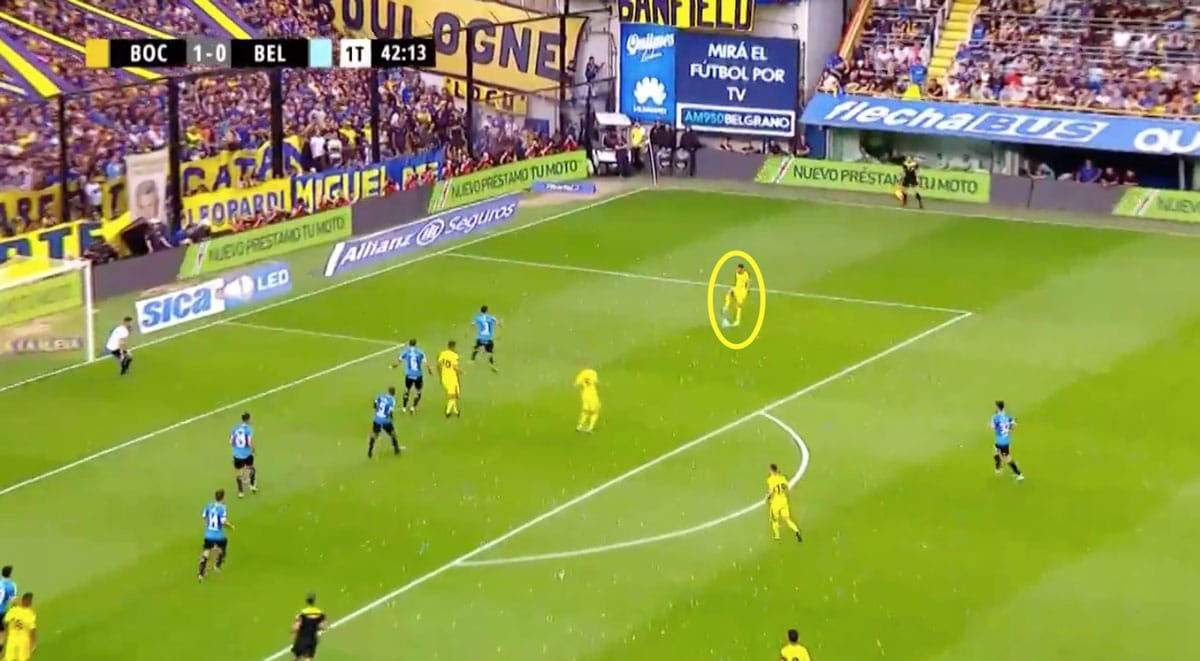 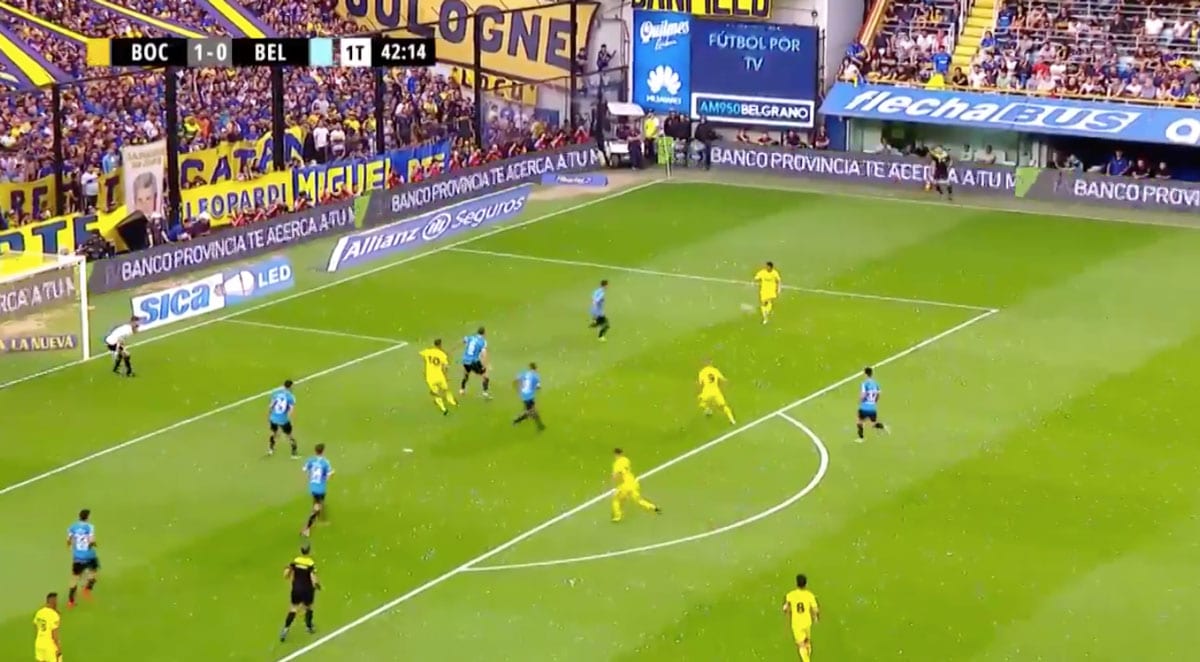 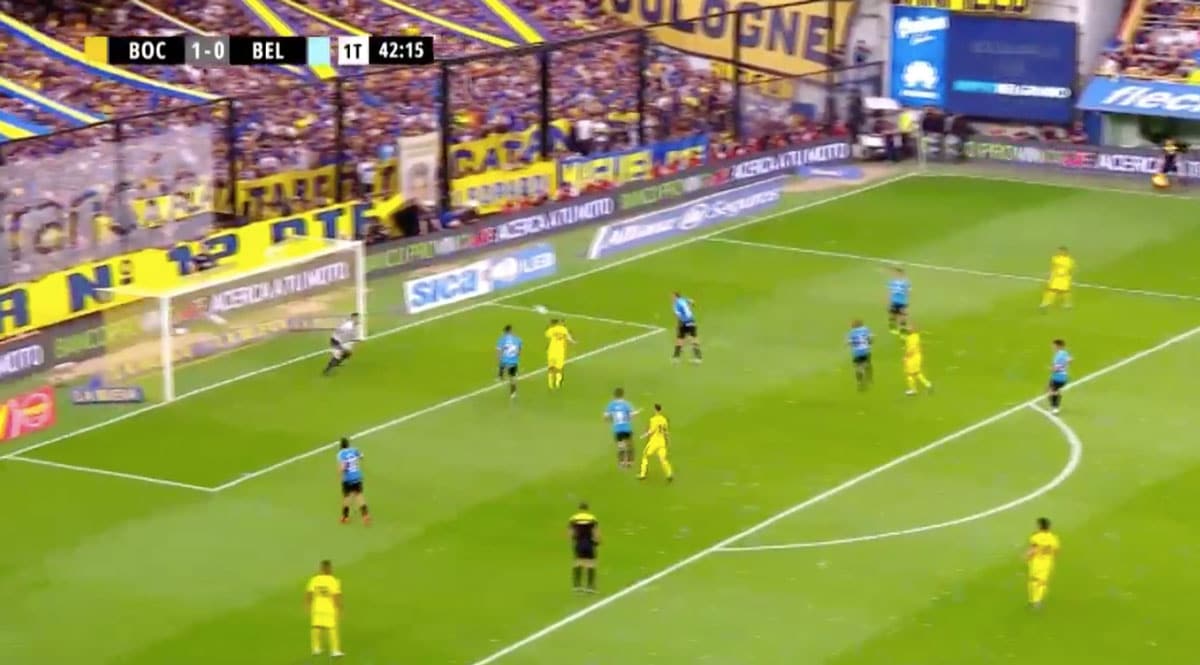 Fabra finds him in space, and he has time to cut in and play a perfect cross for Edwin Cardona to head home. It’s exactly what you want from someone playing wide.

What are Pavón’s main weaknesses?

As Robinson suggested, his finishing hasn’t always been his strongest point. But, at 21, he can improve that.

For Premier League clubs interested in him, like Arsenal, the biggest weakness is arguably something Pavón can’t address yet. He’s not experience European football and that represents a real risk.

There are no guarantees that he can come in and perform straight away, which he’ll need to do if he replaces Sánchez. 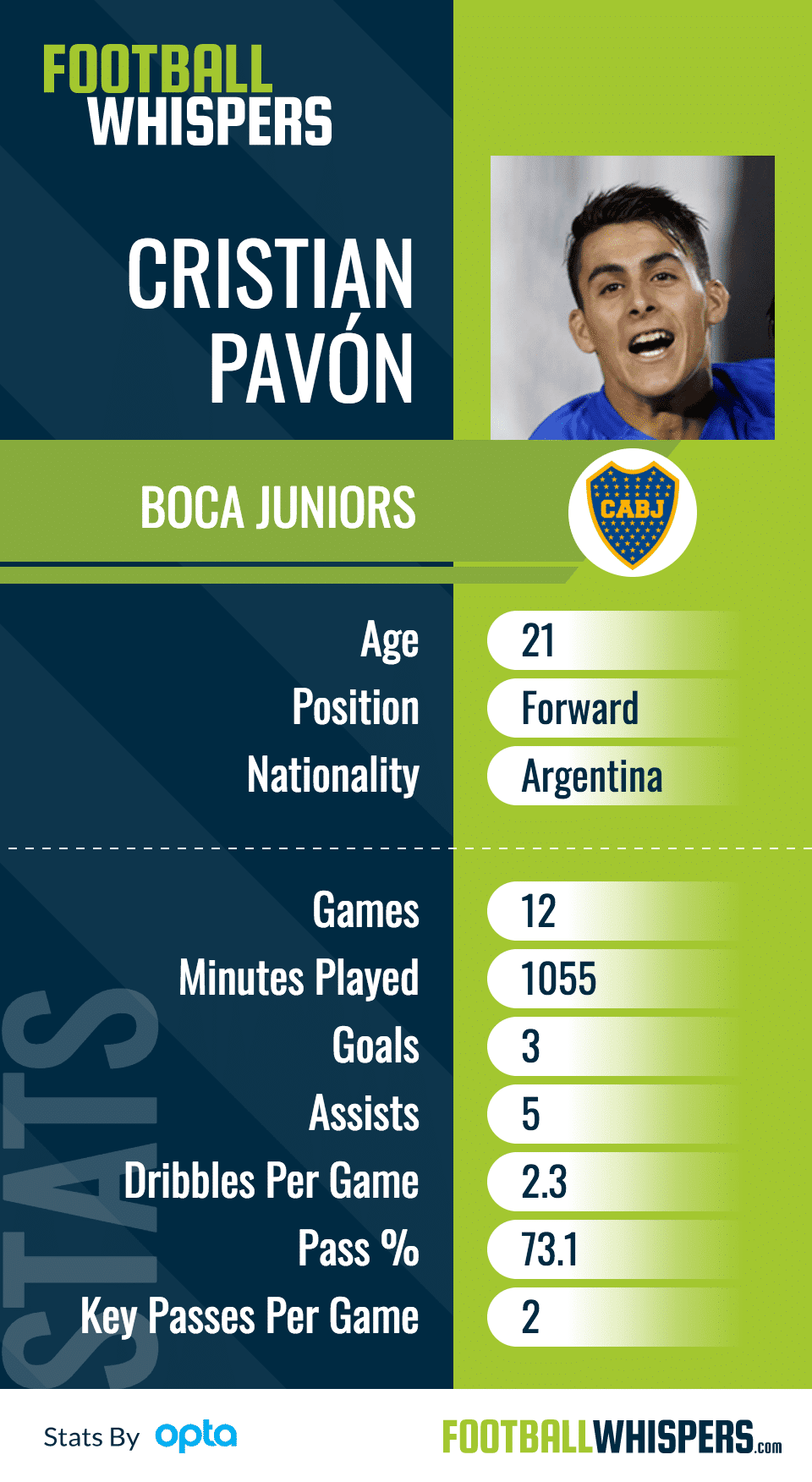 How much is Pavón worth?

Boca Juniors don’t want to sell Pavón at the moment, and are keen on keeping him for the Copa Libertadores.

That would mean Arsenal, or any other teams interested in him, would have to pay his €35million (£31million) release clause.

When asked if they’d received a bid from the Gunners, Boca president Daniel Angelici told Continental 590: “The club has not received anything for Pavón. Unless a club comes along and pays the €35m release clause, I don't think he will leave this year.

“When we signed the new contract [last summer] I told him that I would like him to remain at least until the Copa Libertadores and then I told him personally that we would not limit his career.”

In today’s market, that’s not too bad at all, considering Real Madrid bought then unproven 16-year-old Vinícius Junior for £38million.

There’s no doubt that Pavón is an exciting talent indeed. His pace, trickery and quick feet could make him a terrifying prospect for defences up and down the country.

What’s more, at £31million, he wouldn’t be too expensive considering the inflated transfer fees around nowadays.

With Mesut Özil likely to follow Sánchez out of the door, Pavón could perhaps take his preferred right-flank in Arsenal’s front three.

But if not, his skill and quick feet mean he has the ability to replicate Sánchez on the left.