Five years ago, Paulo Dybala was playing in the Argentine second division, where he scored frequently for Instituto de Cordoba.

Three years ago, he was playing in Italy’s second tier, where he struggled to find the net while fighting for a place in Palermo’s starting lineup alongside the likes of Kyle Lafferty.

But now he stands shoulder to shoulder with some of the world’s finest players as Juventus’ attacking inspiration.

In a short space of time, Dybala has gone from unimposing rough diamond to one of the outstanding individuals in Serie A. And, at 23 years of age, he played a key role as Juventus beat Barcelona on route to the Champions League final last season.

The most compelling narrative running through that fascinating knockout clash between then-Italian and Spanish champions was the meeting of a king and his heir apparent as Leo Messi, seen by many as the greatest footballer of all time, faced off with Dybala.

Dybala found the net twice in Turin to help Juventus to victory in the tie, though recent rumours have linked him with a move to the Catalan giants.

After Neymar's world record transfer to Paris Saint-Germain, Barça need a new star. Ousmane Dembélé arrived from Borussia Dortmund, but in the Catalan club's pursuit of Philippe Coutinho up until the last minute of the summer window, it's clear they are looking to strengthen further.

Rejected in their attempts to sign the Brazilian. Dybala is apparently on their list of alternatives, which would see him team up with his fellow Argentine superstar 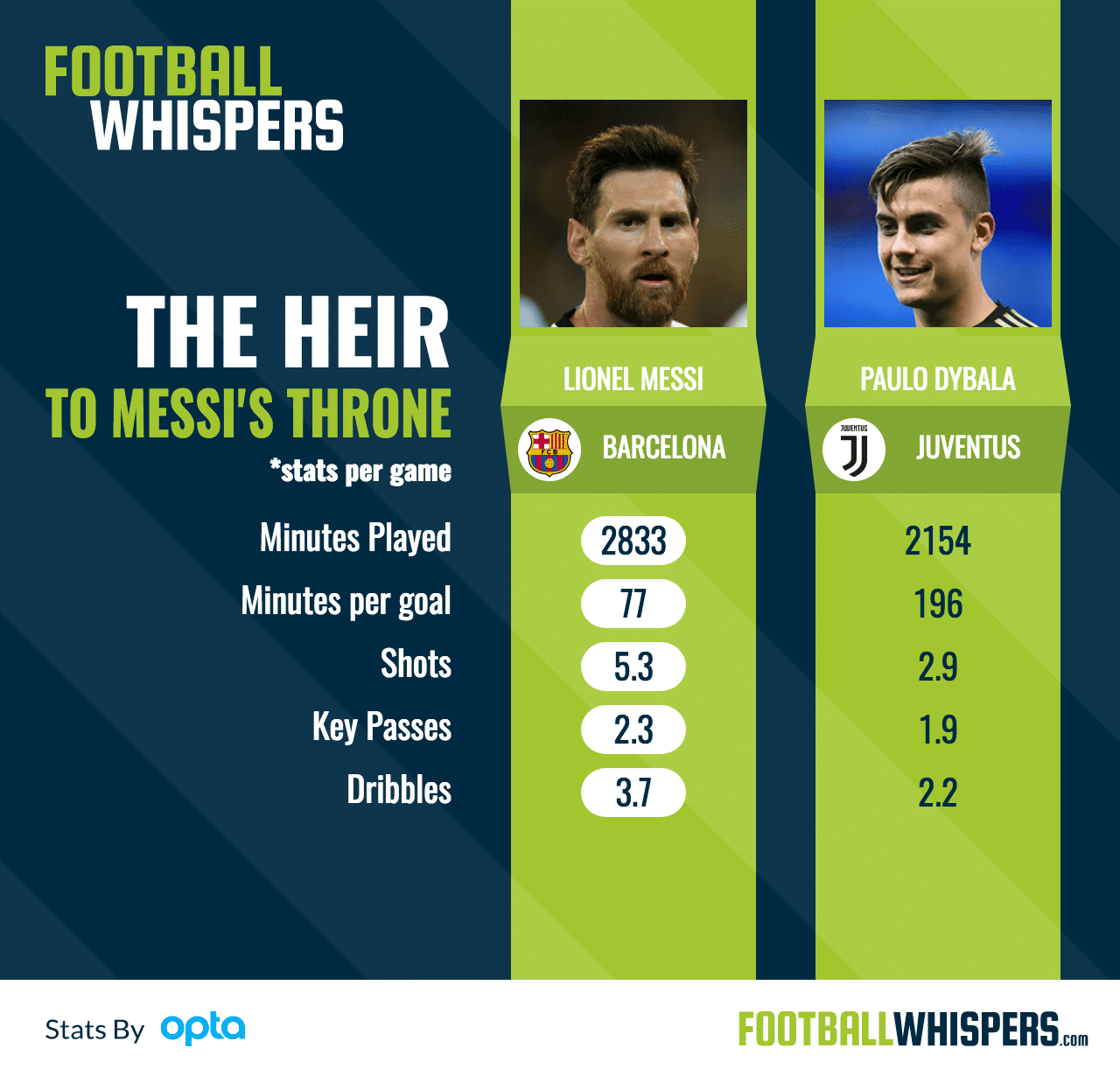 Maybe they simply had an exceptional season filled with impressive performances. Football cannot allow such moments, or seasons, to pass without comparison, and so prospects find themselves mentioned in the same sentence as legends.

This phase has been particularly relevant to young Argentine footballers in the past three decades with scores of budding superstars dubbed ‘the next Diego Maradona’ to no avail. However, one player, Messi, shouldered the burden and lived up to the billing.

Since Messi stepped out of the long shadow cast by Maradona’s immense impact on the game, he has become the new standard for young attackers. And Dybala, having enjoyed a rapid rise to prominence, has been compared to his illustrious compatriot. 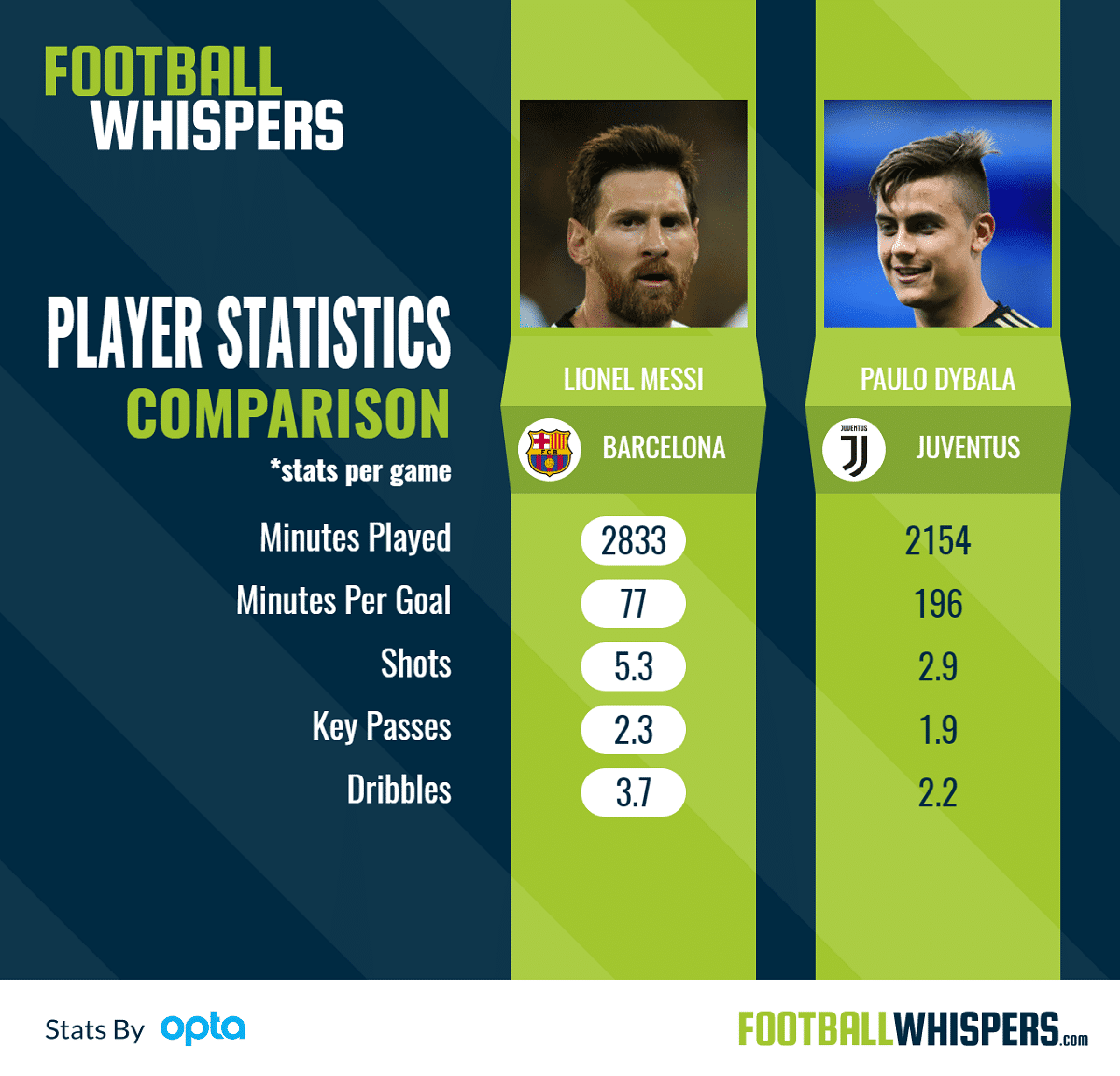 Dybala's maiden campaign on the peninsula saw him score just three times as Palermo suffered relegation to Serie B. His second season yielded a mere five goals as the club made an immediate return to the top tier.

It wasn’t until 2014/15 that Dybala began to torment opposition defences on a regular basis. Under the auspices of Giuseppe Iachini, Palermo achieved a comfortable mid-table position in Serie A with Dybala leading the line in a 3-5-1-1 system.

Few truly knew it at the time but that was a year of attacking abundance for the Sicilian side. As well as Dybala they possessed the languid dribbling gifts of Franco Vazquez, who is now at Sevilla, and the powerful forward play of Andrea Belotti, who is now Italy’s number one striker.

Dybala and Vazquez struck up a connection as striker and playmaker, with the former benefitting from the latter’s control, vision and passing.

That season, Dybala finally broke the double figures mark in Serie A, hitting 13 in 34 league appearances. Four of those 13 strikes were assisted by Vazquez.

That form led to a move to Juventus, with the Bianconeri paying an initial €32 million fee to seal the deal. And, far from being intimidated by such a big move at an early stage in his career, Dybala shone immediately in black and white.

He scored 19 goals and assisted nine more. The Argentine had a direct hand in just over 37 per cent of Juventus’ league goals in 2015/16 as they won a fifth consecutive Scudetto.

Comparisons were inevitable, though initially they were not with Messi. Over half a century ago, another Argentine led Juventus’ attack. He too was left-footed, and he too played with his socks lowered.

The player’s name was Omar Sivori, and he scored over 100 goals for Juventus in an eight-year spell with the club.

The similarities between Dybala and Sivori are striking not just because of their shared Juventus connection, being left-footed and proclivity for taunting defenders with their socks draped at shin-level.

The two are also similar in terms of style. Sivori liked to drop deep, link up play and combine with team-mates. Dybala has done exactly that since joining the reigning Italian champions.

In the 2015/16 season, his role was described as a ‘nine-and- a-half’. He operated in the space between the lines, dropping back to attack the opposition from deep and involving himself in more ways than simply getting on the end of chances.

Last season, Dybala often played as a No.10 behind Gonzalo Higuain in a 4-2-3-1 system. But, regardless of the terminology, he has played a dual role as both creator and scorer of goals. Hence the Sivori comparisons.

Yet, while Dybala has many things in common with his Juventus predecessor, Messi was always going to be his modern frame of reference.

The two both like to cut in from the right, they both have stunning ball control, they both dribble with elegance and they both revel in the space between the opposition’s defence and midfield.

However, when it comes to output, Dybala has a long way to go before equalling Messi.

Dybala is aware of the comparisons between himself and Messi, but he is also aware of the dangers of even trying to compete with his fellow countryman.

“People have to know that I am not Messi. I am Dybala and I want to only be Dybala,” he told Marca a few months ago. “There’s only one Messi, as there was only one Maradona.”

Rather than exploit his situation to compare with his esteemed peer, Dybala sensibly appears determined to carve out his own unique legacy.