One of football's most enduring qualities is its ability to make you laugh at things that aren't really that funny.

Like Vincent Kompany scoring a thunderbolt from a different postcode to Kasper Schmeichel's net. Or Liverpool, often bafflingly harangued as ‘bottlers', proving that Barcelona are, in fact, the sport's biggest chokers.

One could only laugh at the sheer ridiculousness of Kompany's goal, or the utter lunacy that has been dubbed, rather uninspiringly, ‘The Miracle of Anfield'.

And sometimes, Manchester United fans can't help but laugh at Manchester United. Again, it's not a ‘haha' laugh, but more an ‘our club are an utter shambles and it's really depressing we can't even beat Huddersfield Town' kind of laugh.

United's gutless performances of late have, unsurprisingly, fuelled transfer speculation. It is, after all, pretty much the end of the season and, yes, they're linked with almost everyone.

It's difficult, then, to nail down which category Paulo Dybala falls into. According to reports in Italy, the Argentine could be set to leave Juventus this summer for the not inexpensive fee of £85million. United are nicely positioned as frontrunners.

On the face of it, it's not the most ridiculous transfer story you'll read over the next three months. Dybala, once the golden boy of Turin, has not enjoyed his best season following the arrival of Cristiano Ronaldo last summer.

After 22 Serie A goals last year, he's managed just five this term, less than half of his lowest tally since joining the club in 2015.

Add in a sometimes frosty relationship with Juve boss Massimiliano Allegri and the probability of the Italian champions making high-profile attacking recruits this summer, a situation in which Dybala may look for employment elsewhere is certainly possible.

And the landscape at Old Trafford may allow for such a transfer. Despite the failure to qualify for the Champions League, United have considerable financial muscle. On top of that, though, there may be gaps in the squad that need filling.

‘Clearout' is the word being bandied about at the moment and, while it's not exactly clear who will stick around for Ole Gunnar Solskjær's rebuild, it's reasonable to assume that at least one of Paul Pogba, Anthony Martial, Romelu Lukaku and Alexis Sánchez will depart.

Solskjær will need attacking reinforcements. But given United's recent travails in the transfer market, we're allowed to be slightly perturbed when we see £85million and Manchester United in the same headline.

Whereas Liverpool and Manchester City have impeccably constructed title-challenging teams, United's activity in the transfer market over the last few years has been misguided, incoherent and short-sighted. 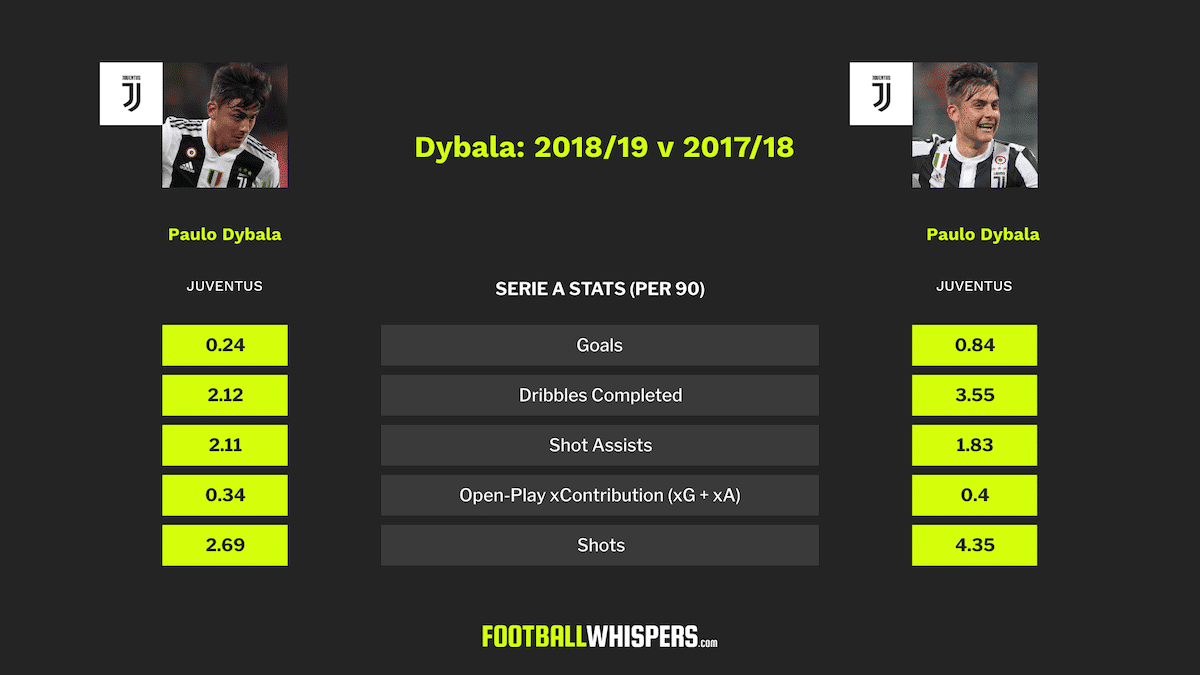 The decision to cede to Sánchez's astronomical wage demands has fostered an atmosphere of greed in the dressing room. Ander Herrera, for instance, admittedly a dependable squad player, suddenly thinks he's worth £200,000-a-week. David de Gea's entourage are also agitating for a Sánchez-esque whopping pay packet.

When Liverpool or City are linked with a player, you can see why. Rodri to City? A clear successor to Fernandinho. Virgil van Dijk and Alisson? Both high-quality players to fill problem positions for Liverpool. United, so devoid of a clear structure or identity, have too often gone for players because they could, not because they should.

The lack of an experienced director of football does not inspire much confidence for what lies ahead, either.

Nobody can ever really tell how a transfer will pan out. What we do know is that Dybala is a player of substantial talent. Signed from Palermo in 2015, La Joya has scored 57 Serie A goals during his time at Juve. In other words, his contributions to four league titles have been far from insignificant.

A three-time member of the Serie A Team of the Year, the Argentine suffered from the tactical tweak which followed Ronaldo's arrival.

Allegri, keen to maximise the Portuguese forward's attacking prowess, switched to a 4-3-3. It has benefitted Ronaldo, who has struck 21 Serie A goals this season, but Dybala, no longer playing as the second striker in Juve's 3-5-2, has managed just five.

Of course, when utilised correctly, Dybala can be devastating. A wonderfully creative, dynamic No.10, the former Palermo wonderkid has, despite a difficult year, posted several impressive stats in 2018/19.

He averages more touches per 90 (72.74) than any other forward and averages more shot assists from set pieces (0.86). He also wins possession in the middle third 3.18 times per 90, which is also first among players in his position.

It's last season's numbers, though, which depict what Dybala can do when his confidence is up. Twenty-two goals, seven of which came from outside the box and more dribbles completed than anyone else with 93.

Let's not beat around the bush. United would greatly benefit from Dybala's skillset. At 25, he still has potential to grow and become one of the world's greatest players. Unfortunately, available only at such a premium price, he represents another avenue fraught with risk.

After the exorbitant sums spent on Lukaku, Pogba, Martial and Fred, it will be interesting to see if Ed Woodward persists with his infatuation with big-money signings. The vanity projects that put the Manchester United name in the headlines.

As good as Dybala is, United may benefit more from a more measured expenditure this summer.