Manchester United. Liverpool. Inter Milan. Those are the three clubs named as potential destinations for Paulo Dybala, the Argentine playmaker who wants out of  Juventus this summer.

According to Italian media, the forward’s agent is holding talks with this trio in an attempt to engineer a move away from Turin. Dybala, it is claimed, wants to escape Cristiano Ronaldo’s shadow.

It’s not the sort of outcome many envisaged when Juventus pried the Córdoba-born attacker away from Palermo in 2015. The fleet-footed maestro was tipped to be the man to finally replace Alessandro Del Piero.

He was supposed to be the poster boy of the Juventus franchise for the next decade but for the second successive summer, he’s reportedly angling for a move away.

And with the Bianconeri already having signed Aaron Ramsey and interested in pairing Portuguese wonderkid João Félix with compatriot Ronaldo, the Serie A champions may feel now is the time to cash in on Argentine.

Coming off the back of his most prolific season to date, many expected Dybala to use the 2017/18 campaign as a platform to take his game to new heights. Once dubbed Lionel Messi’s heir, the Juventus man has been a consistent performer since the move to the Allianz Stadium but he rarely set the world alight.

That was until last year.

He netted 22 times in the league and added a further five assists in 2,358 minutes. It was the first time the 25-year-old had broken the 20-goal barrier in league competition. The feat is an even more impressive one when you consider he was playing more as a second striker alongside Gonzalo Higúain.

However, the landscape at Juventus changed when Ronaldo arrived. Massimiliano Allegri stopped playing a 3-5-2 system and utilised more of a 4-3-3 shape to get the best out of his new signing.

The Juve boss has used several different formations this term, but they all tend to contain three players attack. It's something that suits their No.7 but not their No.10.

Because of this, Dybala is having his least productive campaign since his move to the Serie A giants. While Ronaldo has 19 to his name in the league and leads the way, the Argentina international has struck just four times. 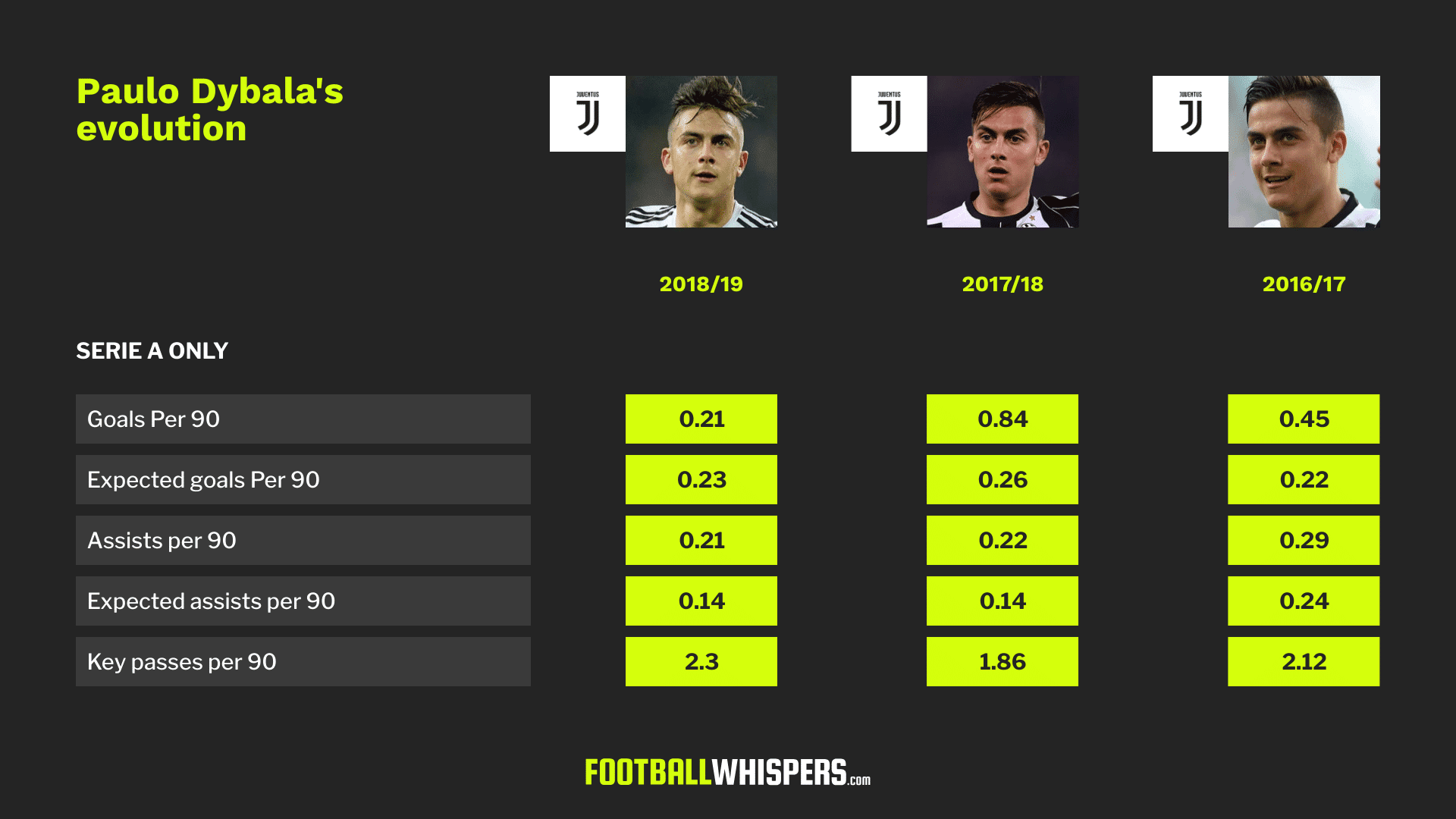 Dybala has had to adapt his game to accommodate Ronaldo. He’s taking fewer shots this season – 2.64 down from 4.35 last year – is no longer on penalty duty and rarely takes free-kicks. The outcome is an obvious one. He's not as productive in terms of goals.

That stat, as shown above, is down 0.63 on a per 90 basis. His assists and expected numbers have remained eerily consistent to last term. He's playing more key passes again, similar to his 2016/17 numbers but he's judged primarily on goals so that is what people will be looking at.

When you look at Dybala's expected numbers, and his heat map, it appears as though very little has changed for the Juventus No.10. But this doesn't tell the whole story. He may be occupying the same spaces as before but he's not able to play his natural game.

Last season he'd find space on the edge of the penalty area and would look to get a shot away. He's one of the most efficient shooters in world football; the placement of his shots add real value to his efforts and it's why he regularly outperforms his xG.

This term, however, he's opting to pass instead of shoot. He's not as dangerous and Juventus aren't using him to his full capabilities. It's why he looks a shadow of his former self.

The fear of stagnating may be the driving force behind Dybala's decision to push for a move away. All three of the linked clubs play a system suited to his style and he could flourish there.

In these teams, he could return to being a 20-goal-a-season forward who chips in with several assists. He'd be an invaluable asset if he managed to post those numbers on a yearly basis.

For Liverpool he could find a home as their No.10, alternating with Roberto Firmino. At Old Trafford, he could partner Romelu Lukaku or Marcus Rashford in attack. At Inter Milan he could replace compatriot Mauro Icardi as the main man at the San Siro alongside Lautaro Martínez.

If Dybala is available, it's an opportunity Europe's elite can't pass up.