Paulo Dybala has enjoyed his most productive season to date with Juventus, at least in terms of scoring, and there’s still one game to play in the Serie A season.

The Argentine attacker has 22 goals to his name in the Italian top flight, three clear of his return during the 2015/16 but one shy of total goal involvements.

The Real Madrid, Barcelona, Paris Saint-Germain and Bayern Munich transfer target is 100 per cent up on his goal return of last season. It’s an extraordinary achievement in itself but is even more impressive when the stats behind it are broken down.

His xG90 (expected goals per 90) has only increased by 0.04 while his post-shot xG90 – a stat which looks at where the effort lands on the target – is up by 0.07. There isn't much in it at all when looking at his stats across the board, at least not enough to explain why he's doubled last season's goals total. 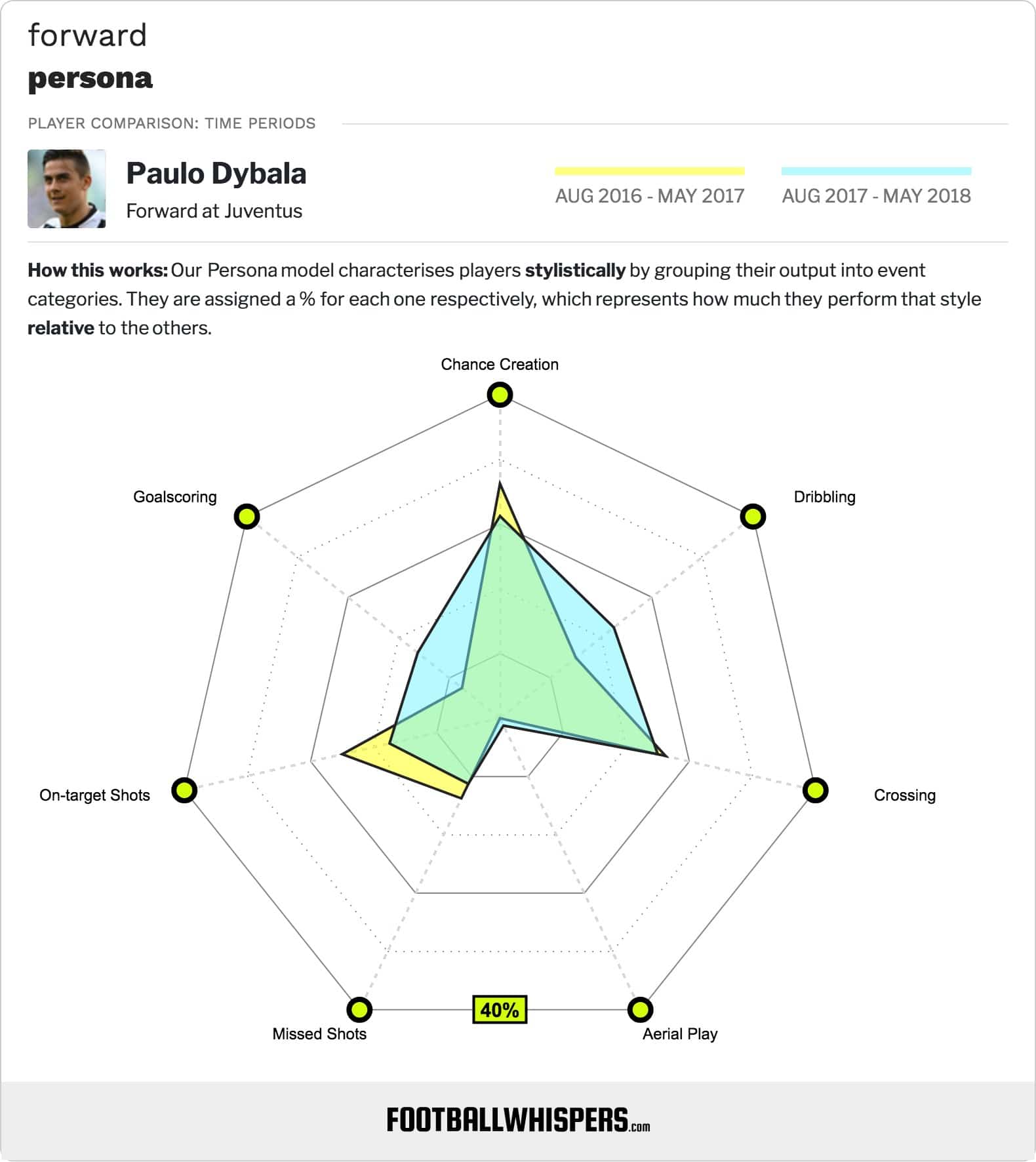 He's similar stylistically, too. The persona radar above, exclusive to Football Whispers, shows he's a slightly better finisher this season and is less characterised by chance creation. Essentially, during the 2017/18 campaign, he's as much as a creator as he is a finisher. However, what is interesting is the fact he's having fewer shots on target this year.

This does make sense. After all, the 24-year-old looks to put his efforts into the corners of the goal meaning if he's not getting it 100 per cent right then they're likely to miss the target altogether. It's a high risk high reward game the diminutive maestro is playing.

It's a trait he's always had and one that makes him so desirable to a number of Europe's elite clubs – and why Juventus doubtless want to keep him in Turin for the next decade if possible. 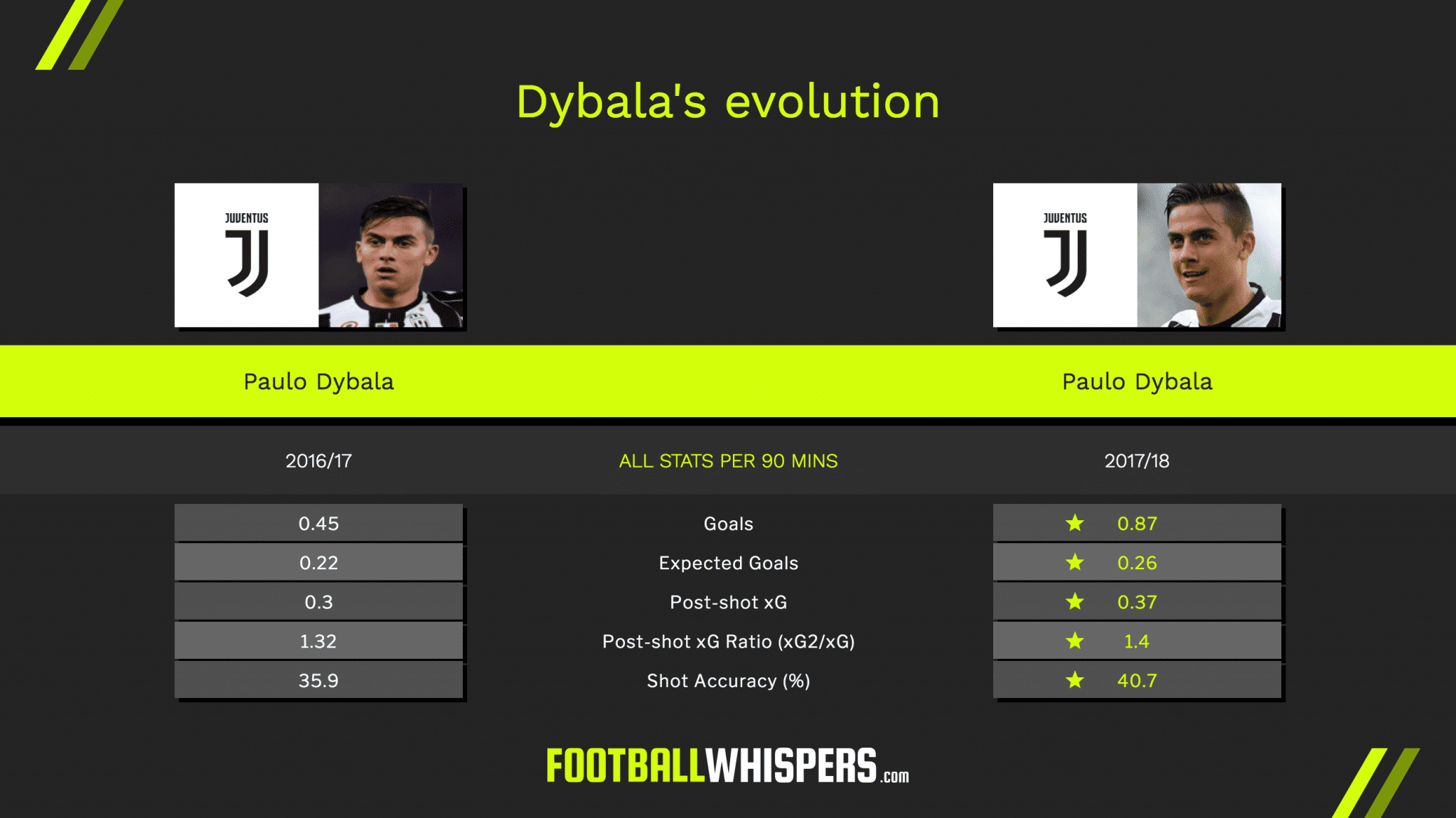 The graphic above compares Dybala's stats this season to last year. As previously mentioned, there's not much between them apart from in the goals per 90 total. Last year the Juventus No.10 averaged 0.45 and this year it's risen to 0.87.

Again, there's nothing there, at first glance, to explain this increase in output. But it's the the post-shot xG ratio which needs to be looked at in more detail. The stat helps reveal which players are adding real value to the shots they're taking.

Dybala's adding 40 per cent to the quality of his chances with his shooting, shown in the graphic with the 1.4 value. Last season it was 1.32, still high but in the space of a year he's added eight per cent quality to his shots.

For context, Lionel Messi‘s post-shot xG ratio is 1.2 and Mohamed Salah‘s matches the Barcelona legend with Mauro Icardi just behind on 1.19. Harry Kane comes in at 1.01 and Cristiano Ronaldo's is 0.97.

With the exception of Icardi, all four rely on volume. They're elite chance-getters meaning they get opportunities on a regular basis whereas Dybala is a quite frankly ridiculous finisher who is perhaps the definition of clinical.

Last season's totals showed he had the potential to do what he's done during this campaign. Being able to do it in such a ruthless manner shows his quality.

He's one of the best finishers in world football today and the fact his post-shot xG ratio has been high over the last two seasons means what he's doing is sustainable.