When you’ve enjoyed a dazzling career spanning more than 30 years including a haul of Premier League titles and a couple of Champions League trophies thrown-in for good measure, most people would say regrets are far too few to mention.

But for Alex Ferguson not securing the signature of one of the most exciting and dynamic midfielders of his generation still remains one of his biggest disappointments to date.

It’s 1988. Acid house music and illegal raves are all the thing. Margaret Thatcher’s Conservative government has been in power for almost a decade and the football landscape is very different from that of today. English clubs are banned from Europe following the Heysel tragedy and Manchester United are languishing in the wilderness having not won the league for over 20 years.

Despite not being able to play on foreign shores the domestic footballing world is very much dominated by a Liverpool side who are setting the benchmark for those trying to hang onto their coat-tails.

Ferguson may have had his eyes set on their perch, but he was far from removing them from it anytime soon.

Meanwhile, up in Newcastle a young lad who boasted of a pre-match meal of Mars bars and Newcastle Brown Ale was making waves, not just down the Tyne, but throughout the footballing universe.

It was during the previous season that the man who was to turn around the fortunes of one of the most famous clubs in the world first clapped eyes on a player who he envisaged performing a pivotal role in one of the biggest rebuilding projects since Old Trafford was flattened in the blitz. A boy who simply went by the name, “Gazza”

When the two teams took to the St James’ Park pitch that day Newcastle were hovering precariously above the relegation zone, but the young Gascoigne didn’t care, and continued to play with the verve and guile that had caught the attention of everyone in the game.

“My three central midfielders that day were Bryan Robson, Norman Whiteside and Remi Moses,” Ferguson later explained. “All great footballers and he just tore them apart. When he nutmegged Moses and patted him on the head, I was out of the dug-out shouting ‘Get that f****** so-and-so'. Robbo and Whiteside were chasing him up and down the pitch and they couldn't get near him.” 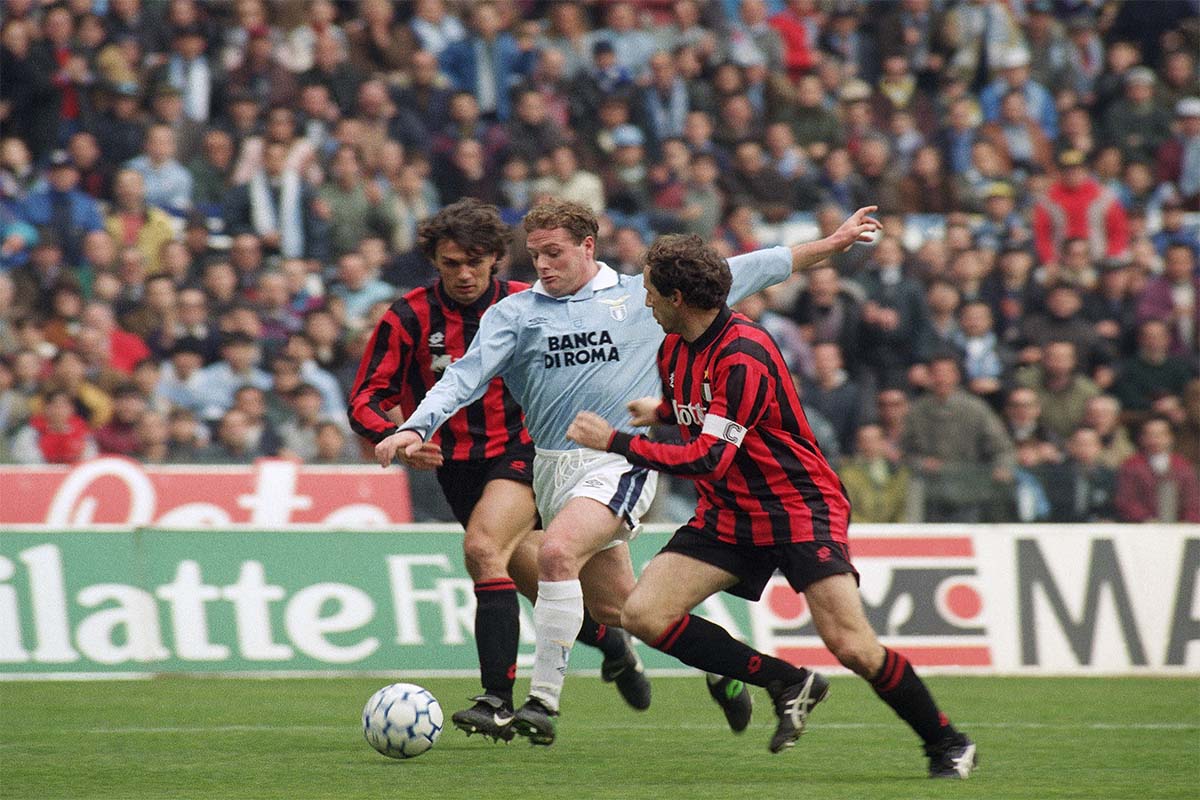 From that moment Ferguson knew what an impact the soon-to-be PFA Young Player of the Year could make on an ageing United side who were desperate for an exciting midfield play-maker. And so the courtship began.

Unfortunately for United though, they were not the only ones who had been wowed by the silky skills and tenacious talent of the young lad from Dunston, triggering a race to sign one of the most talked about and controversial figures the game would eventually come to know.

But it seemed United had got their man in the summer of 1988 after talks between the player and then manager had taken place and an impressed Gascoigne had been shown around the club’s training facilities.

“We spoke to him the night before I went on holiday,” explained Ferguson. “He said, ‘Go and enjoy yourself Mr Ferguson, I'll be signing for Manchester United'.

“So I went on my holidays. But then Chairman Martin Edwards rang and said ‘I've got some bad news – he signed for Tottenham,’ I was furious.”

But what was it that brought about this dramatic U-turn that would see Gazza join former Barcelona boss Terry Venables at White Hart Lane and not sign for what was to become one of the most successful teams in living memory?

“Spurs offered my family a house and United wouldn’t match it,” explains Gascoigne. “I wanted to look after my mum and dad. Then they offered my sister a sunbed in the contract, which she got.”

So in the summer of 1988 Paul Gascoigne would eventually sign for Tottenham for a then record transfer fee of £2.3 million, Ferguson was so furious he didn’t speak to him for almost a decade. But the history books would suggest that the two men’s fortunes would go in drastically different directions from that moment on.

Just two seasons later Ferguson would win his first trophy as United manager which would signal the start of an era of unrivalled domination for the club that would see them win their first league title in 26 years and a steady supply of domestic and European silverware along the way.

Gascoigne, on the other hand, found himself taking the helm of a Spurs team who often flattered to deceive, with the only highlight in his spell at the club being the 1991 FA Cup final. But the biggest day of his career would see him leaving the hallowed turf on a stretcher long before Spurs captain Gary Mabbutt received the famous old trophy in what was to be just the start of a battle with injuries that would blight the rest of his career.

But what if Fergie had got his man?

The prospect of Gascoigne in the centre of the park alongside fellow Geordie Bryan Robson and under the guidance of a manager who would carve out a reputation for himself when it came to developing, nurturing and harnessing talent is one probably best not dwelt upon by Gazza, or United fans for that matter. 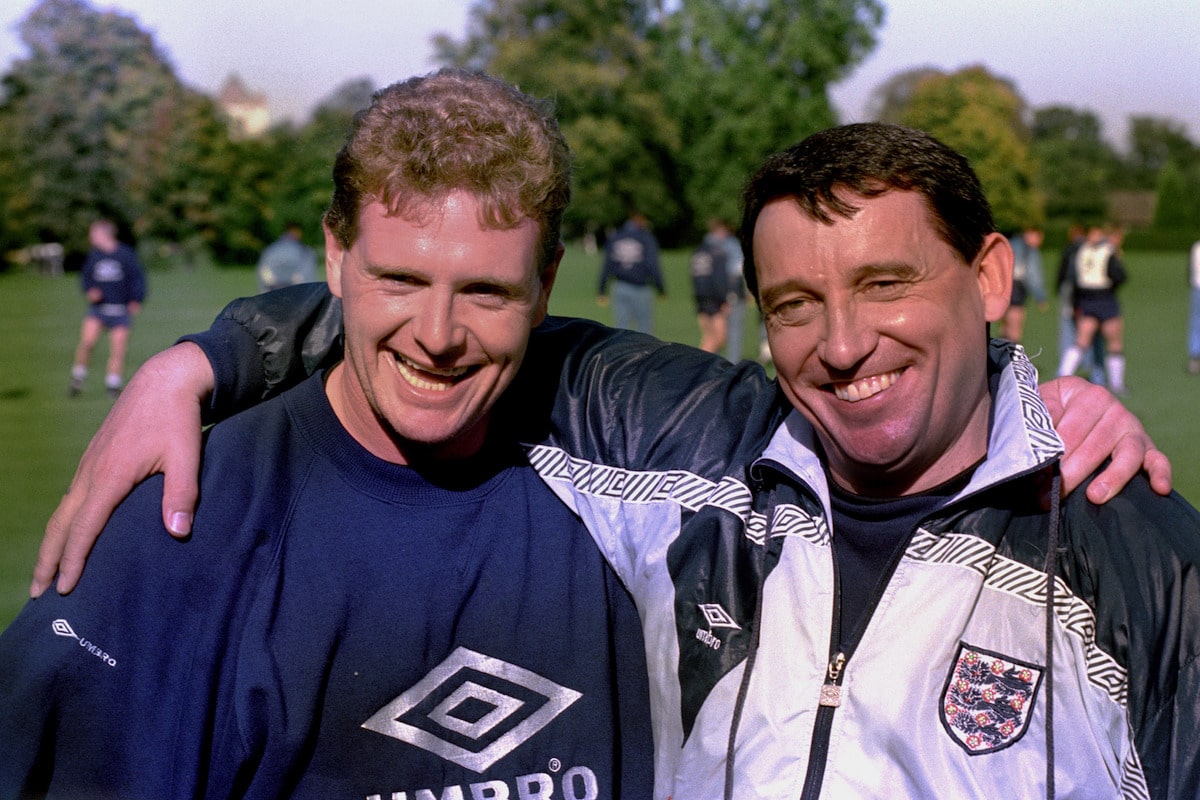 Think of him setting a hungry Ryan Giggs free down the wing, putting Andy Cole through with an exquisite through pass, finding Eric Cantona’s forehead thanks to pinpoint accuracy or standing over a free-kick with David Beckham. No wonder Ferguson blanked him.

Ferguson’s ability to man-manage often highly volatile characters while getting the best out of them on the field is well documented and could have made all the difference to a player of the greatest ability who was also susceptible to some of the biggest demons going.

The way he dismantled the booze culture that existed at Old Trafford when he first arrived at the club, the transformation of Eric Cantona from serial tearaway to club captain, and the way he primed Cristiano Ronaldo to become the global sensation he is now have shown that he has the ability to offer guidance as well as crack the whip, something which hasn’t gone un-noticed by a reflective Gascoigne.

“I do look back and think about what would have been if I had joined, what would I have won at Man United?” he would later claim.

Of course Gascoigne would once again be the subject of another record transfer, joining Lazio from Spurs for £5.5 million in 1992 in a deal which also included a £2 million signing-on fee for the player alone.

But his chance of joining United had passed and there was no going back for Ferguson as Gazza continued as something of a footballing journeyman that would eventually see him end up at Burnley – forever trying to recreate those dizzy heights of the late 80s that had made him the target of the most successful British football manager in history.

And it wasn’t just Gascoigne left ruing his luck, full of regret at the thought of never pulling on the red shirt of Manchester United. Ferguson has described the failure to sign the 21-year-old wonder-kid as one of the biggest disappointments in his managerial career.

“Alan Shearer is one I wish I'd signed, but for me the most disappointing of all was Paul Gascoigne, the Glaswegian explained some years later.”He was the best player of his era, a breath of fresh air because he played with a smile.”