The Belgian has played in 16 Premier League games, but is yet to start one of them for the Blues.

In fact, he has made just five starts – two in the FA Cup and three in the League Cup.

The 23-year-old has featured in just 412 minutes of action this season at club level, with 97 of those minutes coming in the league.

While it is frustrating to see a talented player not get game time, with Diego Costa’s impressive form and Chelsea seemingly looking unstoppable in their charge to the Premier League title, Batshuayi can hardly complain.

But it would be a surprise to see him stay at Stamford Bridge beyond this season, with a move away from Chelsea, albeit maybe only a loan one, surely the most likely situation to please both parties.

And that would mean Antonio Conte’s side would only have one recognised forward.

Who is Patrik Schick?

Schick is a 21-year-old Czech striker who joined Sampdoria for a fee of £3.4million, according to Transfermarkt.

Before arriving in Italy, Schick came up through the youth ranks at Sparta Prague, where he made five appearances without a goal.

At Sampdoria, like Batshuayi at Chelsea, Schick has mainly been used as a substitute – in all competitions, he has made just six starts – five in the league and one in the Coppa Italia.

But despite only five Serie A stars, the forward has seven league goals so far for I Blucerchiati.

While he tends to play down the middle, he is not averse to drifting wide and cutting in on his stronger left foot.

He seems to go past players with ease, using his skill and quick feet to trick defenders and beat men as he takes them on.

You can see below against Genoa how he picks the ball up on the right wing, going down the line before cutting inside, rolling his feet over the ball twice to bamboozle two defenders and get nearer the penalty box.

He then cut inside, taking another two defenders out of the game, before getting a shot away and forcing the goalkeeper to make a good save. 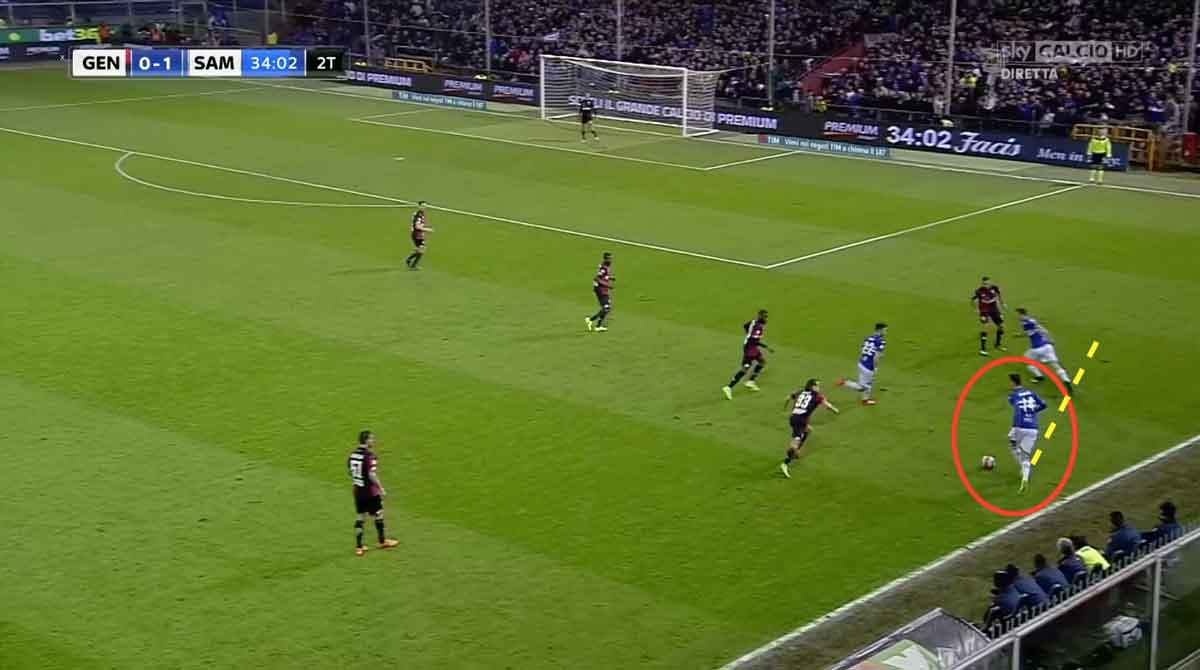 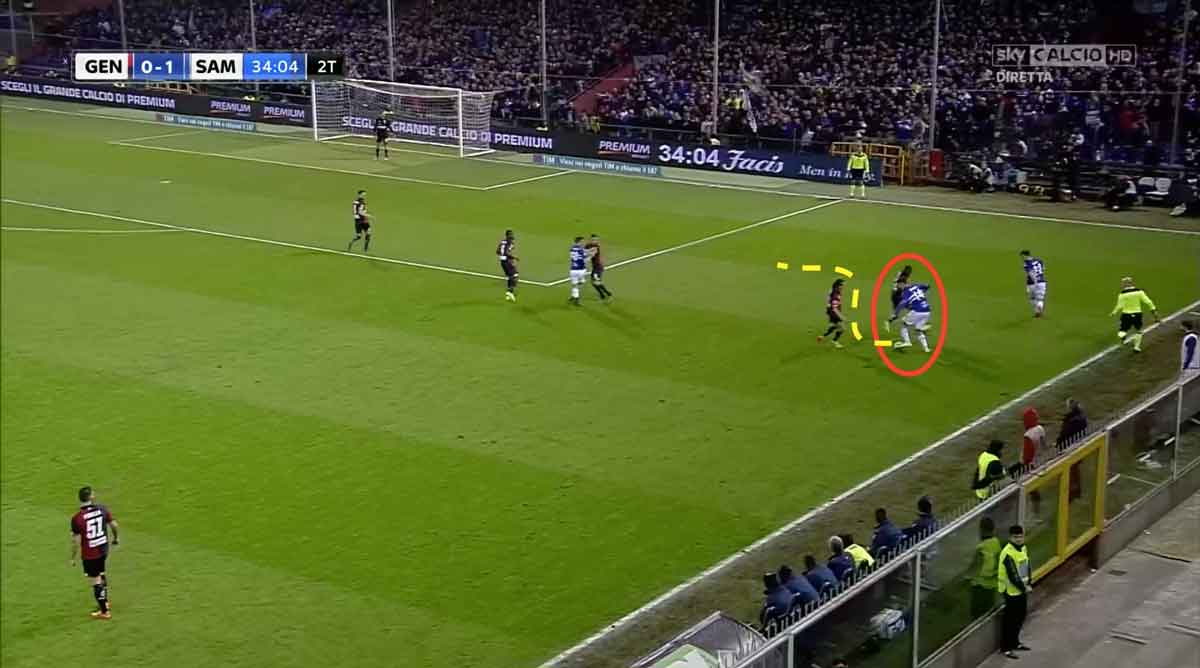 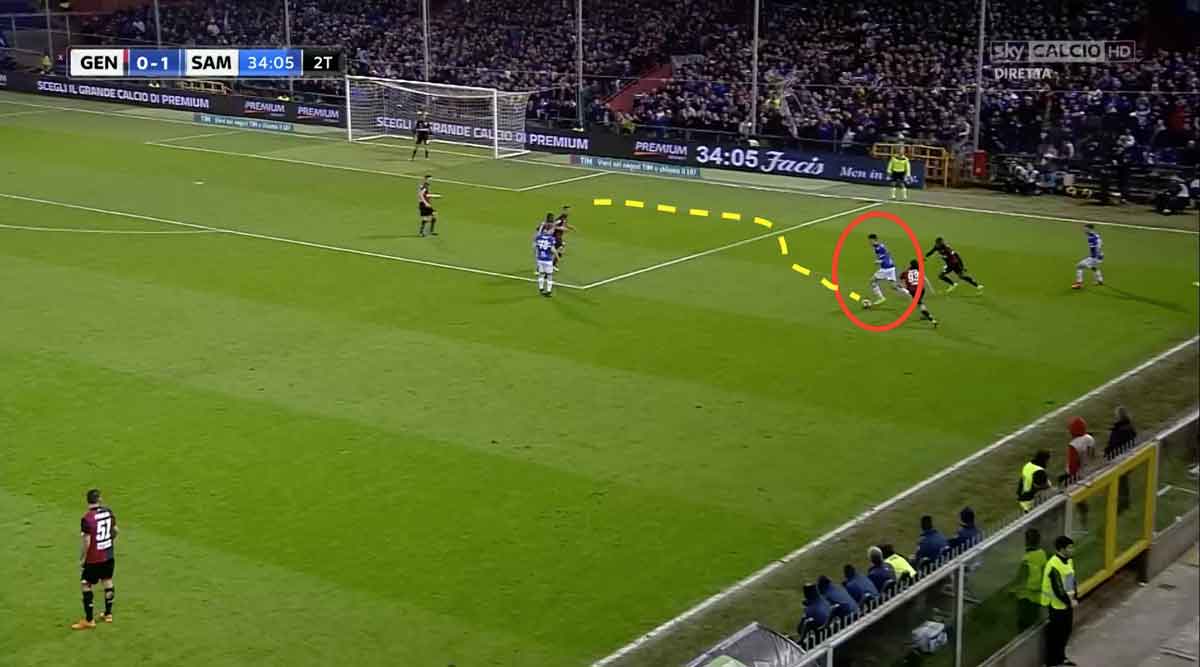 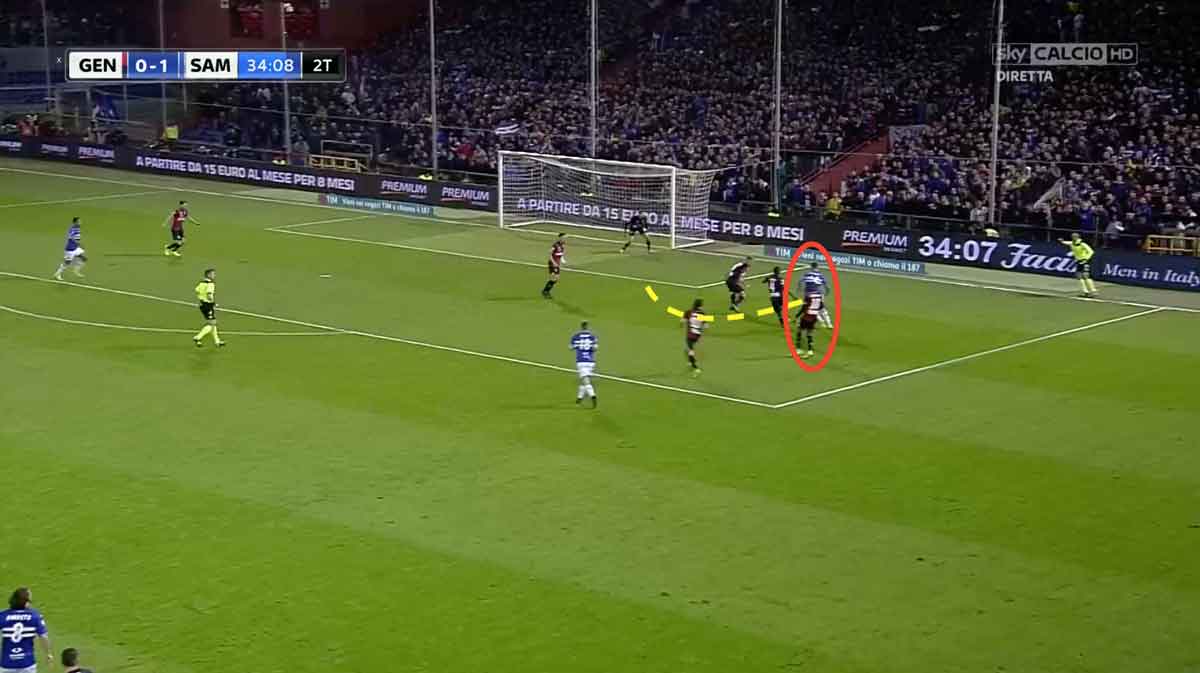 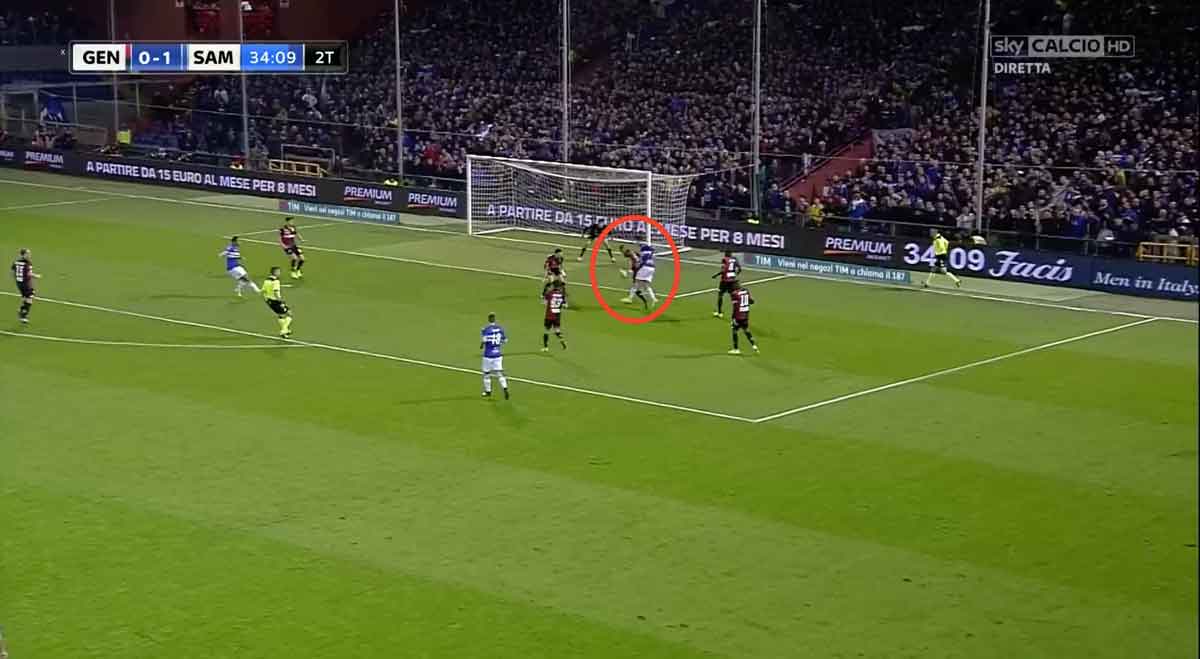 Watching him, is reminiscent of Mousa Dembélé in the way he goes past defenders with ease – personally, I don’t think there are many better than the Tottenham man at doing just that (although him being left-footed may play a large part). 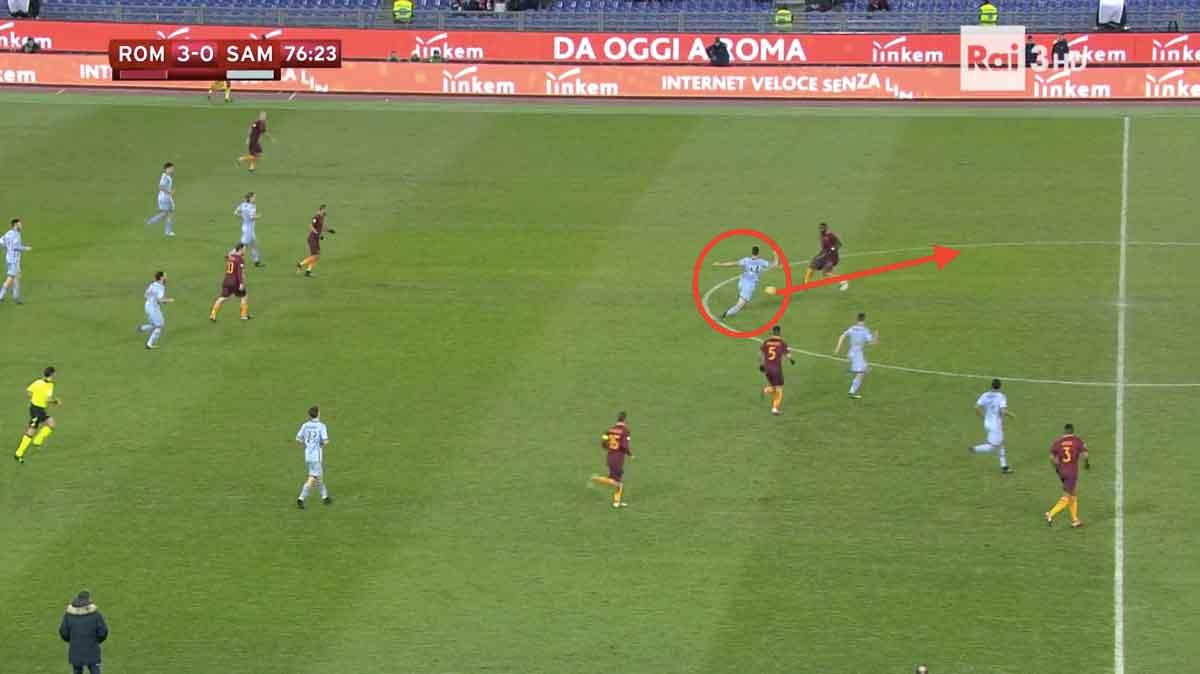 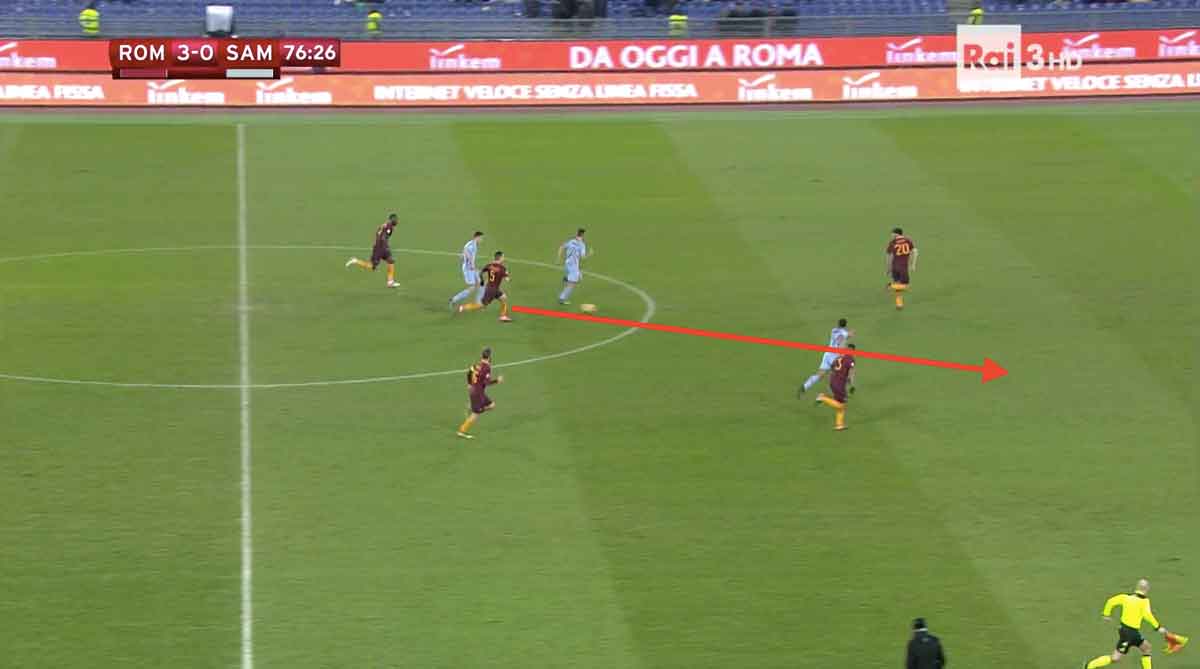 Against Roma, as you can see above, he picks the ball up in the middle of the pitch, before playing the ball through the defender’s leg and breaking into the opposition half.

He then plays the perfect ball through to set up a shooting opportunity.

In Conte’s 3-4-3 with lightning-quick counter attacks, Schick looks like he has the necessary skills to thrive.

But for a striker, you would hope he could score goals too, and the 21-year-old can.

Against Lazio below, you can see how good he could be, cutting onto his left out wide, before moving more centrally and finishing into the bottom right corner. 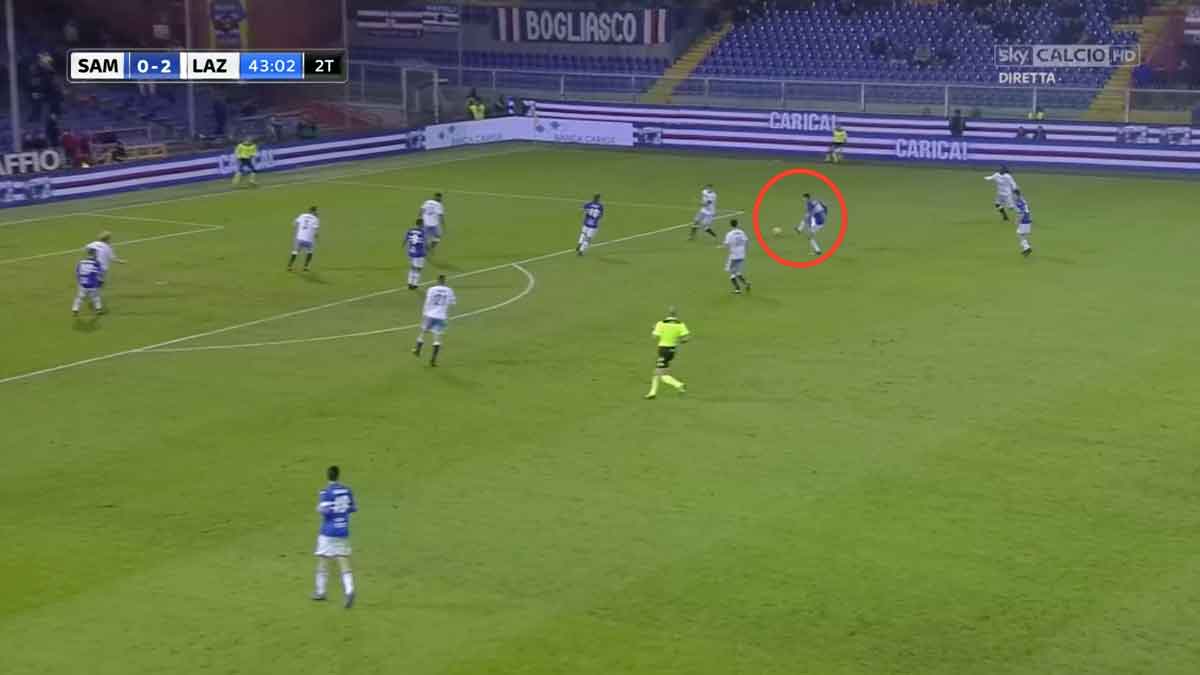 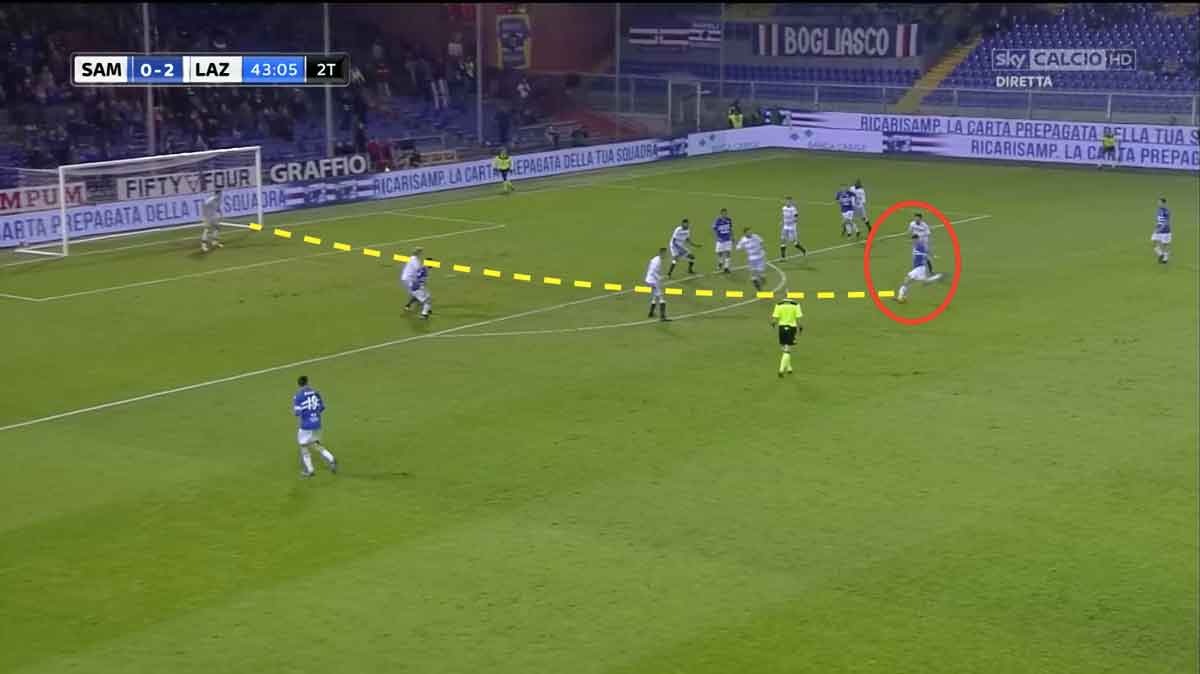 He is still young and obviously raw, but he is a very exciting prospect, who while he mainly plays as a striker, could perhaps play in a slightly deeper role or on the wings.

It would still be hard for Schick to get into the Chelsea first team at the moment, but if Diego Costa does leave and a couple of strikers come in, he would have the opportunity to try and take his chance.

How does Schick compare to Batshuayi? 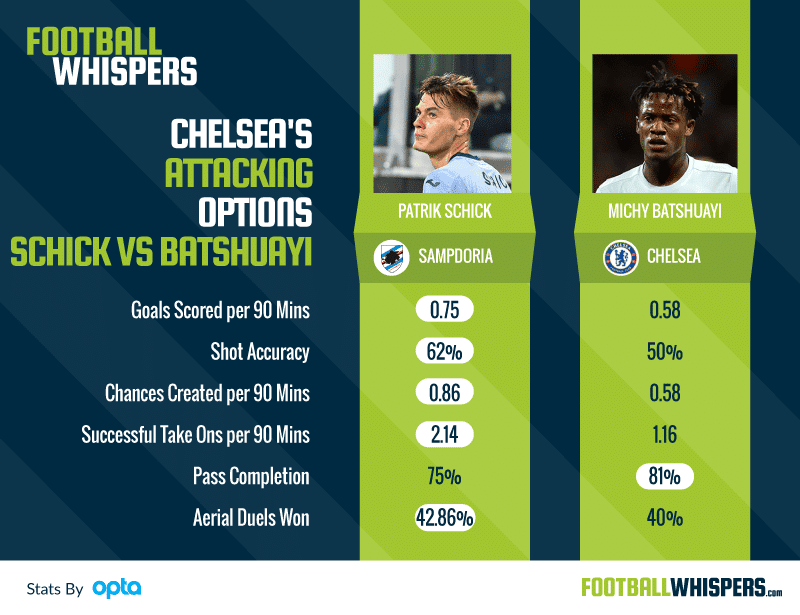 Obviously it is harsh to compare Schick to Batshuayi given the Belgian’s limited playing time at Chelsea, but if you look at their league stats per 90 minutes, the man from the Czech Republic does come out on top.

His seven league goals compared to the Chelsea forward’s one works out at 0.75 per 90 minutes, compared to Batshuayi’s 0.58.

Schick also has a better shot accuracy rate (62 per cent compared to 50 per cent) than the Belgian, and he tends to create more chances per 90 minutes too (0.86 compared to 0.58).

But Batshuayi does have a greater pass completion rate than Schick.

How much would Schick cost?

The Sampdoria striker has a buyout clause and there is talk of him being offered a new contract to increase that – but how much it is exactly is unknown. 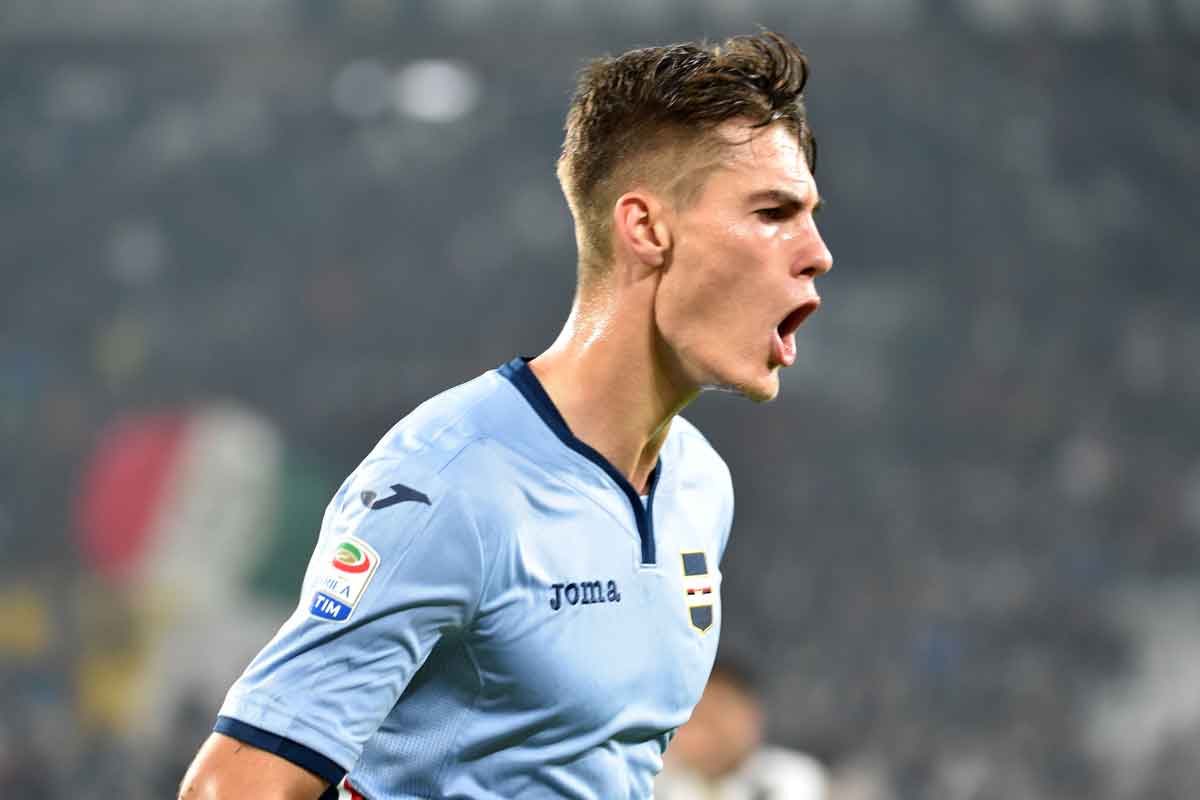 German newspaper Sport Bild claim that Inter Milan are willing to pay as much as as £21.7m (€25m) for the frontman, so he’s unlikely to come cheap if Chelsea want him.

But Schick seems to see his future in England.

Asked earlier this month where he saw his next step being, Schick said: “The Premier League? Why not.

“It’s the best league in the world and above all the most balanced. Who knows, but right now I’m at Sampdoria.”

Will Antonio Conte stick with 3-4-3 at Chelsea?