The days of the Old Firm spending big money are long gone, yet Celtic have reportedly launched an offer rising to £8million for Patrick Roberts.

Roberts is extremely popular at Celtic Park and was one of the stars of the Bhoys' treble-winning campaign. And little wonder. The 20-year-old scored 11 times and contributed 18 assists from the flanks for Brendan Rodgers' side.

Splashing a fee of up to £8million on the Manchester City loanee would be a huge statement of intent from the Scottish champions. But it's a statement they have to make if they are to progress in the Champions League.

There is no denying Celtic were brilliant last season. The Hoops played enthralling attacking football under former Liverpool boss Rodgers and would have won the Scottish Premiership even if rivals Rangers weren't in disarray.

And, as much as becoming the first club in Scottish top-flight history to win ten in a row would be an achievement Celtic fans would never grow tired of crowing about, progress in the Champions League will be the real measure of success under Rodgers.

Since 2000 the Bhoys have gone beyond the group stages on just three occasions. In 2006/07 they lost to AC Milan 1-0 on aggregate in the round of 16. The following season they were beaten 4-2 by Barcelona. And, most recently, they lost 5-0 on aggregate to Juventus in 2013.

Granted, the draws have not been kind to the Hoops. On the occasions they have made it out of their group they have been paired with some of Europe's stellar names. But Rodgers' current side are the best placed in recent times to make progress on that front and Roberts could be pivotal.

The 20-year-old, who joined Manchester City for £8million in 2015, showed his quality in the Champions League last season by scoring the opener in Celtic's 1-1 draw at the Etihad Stadium.

Driving into the penalty area off the right wing, Roberts embarrassed the experienced Gaël Clichy and fired beyond the helpless Willy Caballero with his left to give Celtic an early lead.

Roberts could have done little more to make his point in front of City boss Pep Guardiola. But given the wealth of talent available to the former Barcelona and Bayern Munich coach it seems unlikely that Roberts will be in his plans this season.

The big question from Roberts' point of view is whether he sees himself breaking into the starting XI at City in the longer term or not.

City have Colombian wideman Marlos Moreno, 20, parked on loan at Deportivo La Coruña while it is easy to forget – off the back of a fine debut campaign in England – that Leroy Sané is only 21.

After a disappointing first season in charge Guardiola has made wholesale changes this summer. If Roberts is a victim of those then he could do worse than signing up for more time under Rodgers.

The Ulsterman has made a huge impression on several Celtic players last season. Top scorers Moussa Dembélé and Scott Sinclair were the most obvious examples but midfielder Stuart Armstrong, who looked out of place under Ronny Deila, thrived with the benefit of Rodgers' coaching.

One man who is a certified fan of Roberts is former Celtic midfielder-turned-assistant manager John Collins.

“Sterling cost £50million and he [Roberts] scores goals and is more creative than him. I think he’s got the quality.

“I’d love him to stay at Celtic and entertain the Celtic fans but I think he’ll return.”

It was not the first time Collins had waxed lyrical about Roberts. The winger spent the second half of the 2015/16 campaign on loan at Celtic Park and impressed by scoring six times in nine league starts.

“I don't like comparing him to the best player in the world, which in my opinion is Messi. But you can see where people get the resemblances,” said Collins.

“He is left-footed. He likes to take people on and if he ends up half as good as Messi then he has done well. That has got to be his target, to try to emulate what Lionel Messi does week-in, week-out, which is score goals, create chances.

So what makes Roberts so good?

He has all the attributes a winger needs, not least his pace. Like Sinclair he boasts the kind of speed which puts defenders on the back foot and causes panic. He is good running at full-backs and because he is comfortable going on the outside or cutting inside he leaves defenders guessing.

But Roberts doesn't just receive possession, get his head down and head for the byline. There is much more to his game.

In the images below, taken from Celtic's 5-0 win at Partick Thistle, a game Roberts bagged two in, he shows good control, speed of tout and vision to control a pass, spin and loft the ball into Leigh Griffiths' path. 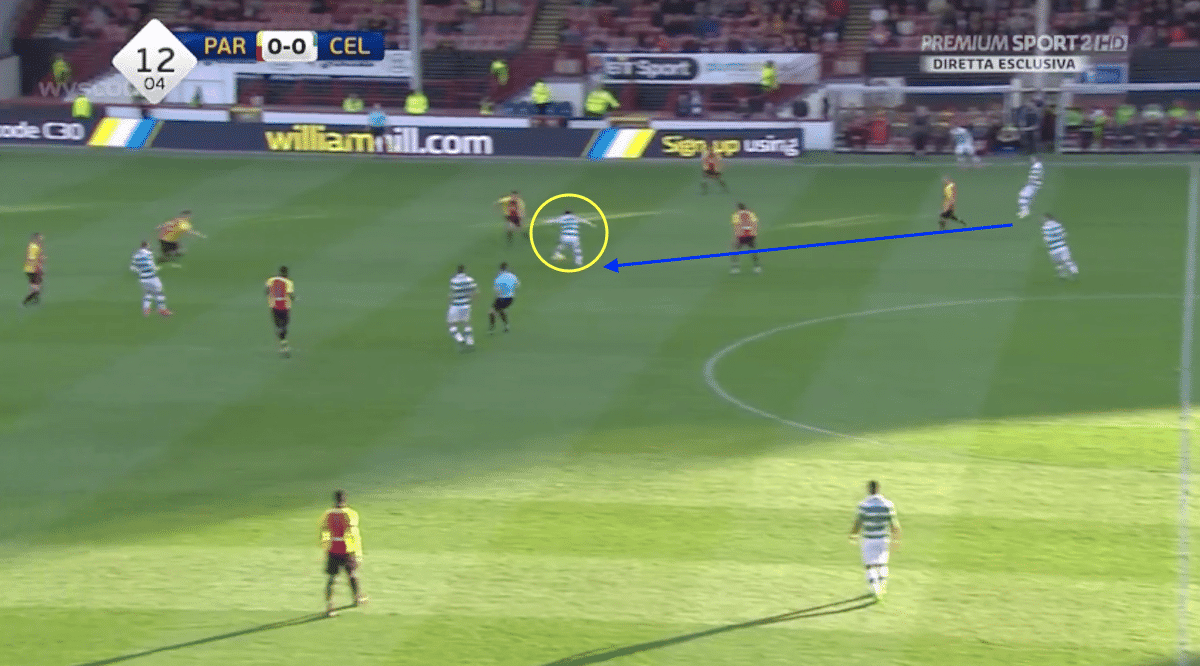 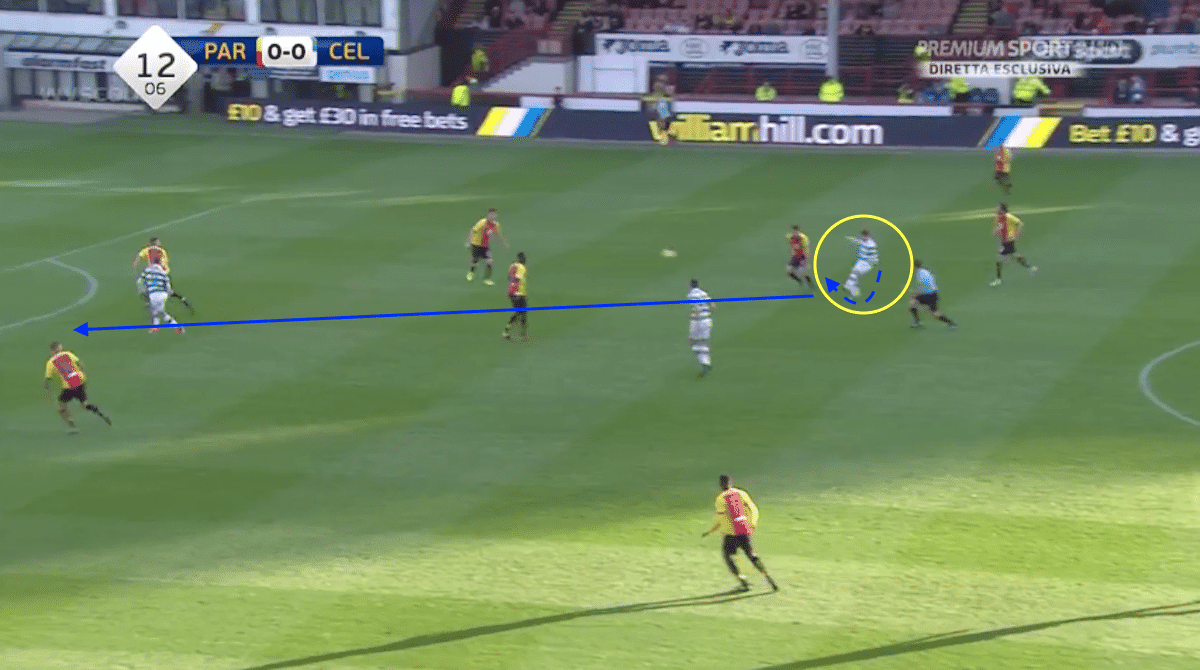 He has the pace and unpredictability to cause defenders at the highest level problems. Celtic expect to be on the back foot in most games in the Champions League and need those qualities to find a way through.

Roberts provided exactly that time and time again last season. In the same match against Partick Thistle he wins possession on the edge, holds off the challenge of a Jags defender and lofts the ball into the top corner with aplomb. 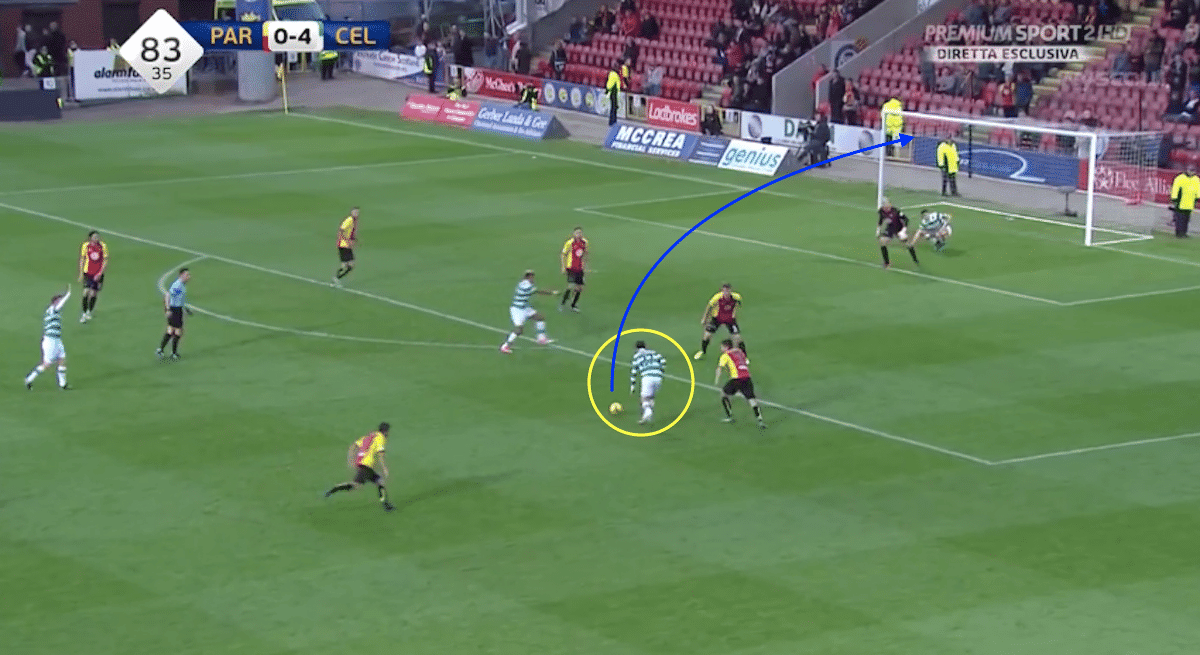 In April's title-clinching win over Hearts he showed similar invention, holding off the attention of two defenders before picking his spot to score the Bhoys' fourth.

It is that kind of quality which would make Roberts a snip at the price he is being quoted at.

Whether or not he ever forces his way into the bracket occupied by Messi is another matter. But he can be Celtic's equivalent and that is why he would be such a coup.