Newcastle United are, according to reports in Germany, one of several sides interested in a summer move for Nürnberg midfielder Patrick Erras.

The 24-year-old has started just seven Bundesliga games this term for the German club, who sit in the relegation zone with six games to play and are set to make an immediate return to the second tier.

Bild claims the defensive midfielder could be available for as little as £5million this summer as he will only have one year remaining on his contract.

“I have so much to thank for the club but, of course, when you're 24, you also have to think about what the next step in a professional career should be,” Erras told the German publication.

“Sometimes a change of scenery is good for a young player. My contract expires in 2020 and leaving has crossed my mind.

“I can confirm that clubs from the Premier League and the Bundesliga have already approached my advisor. But my first point of contact will always be the club.”

Newcastle are well stocked in central midfield but that is likely to change in the summer. Isaac Hayden has spoken publicly about his desire to return to London while, according to The Chronicle, the long-term futures of Jonjo Shelvey and Mo Diamé are also uncertain.

The £5million price tag Nürnberg have placed on Erras isn't a problem for any Premier League side. And given this is only his first season in the German top flight, he is unlikely to be on, and therefore demand, a hefty salary.

That alone isn't enough to tempt even the most financially prudent of clubs, however. Erras must be good enough for the English top flight if a move is to be made. So, quite simply, is he? 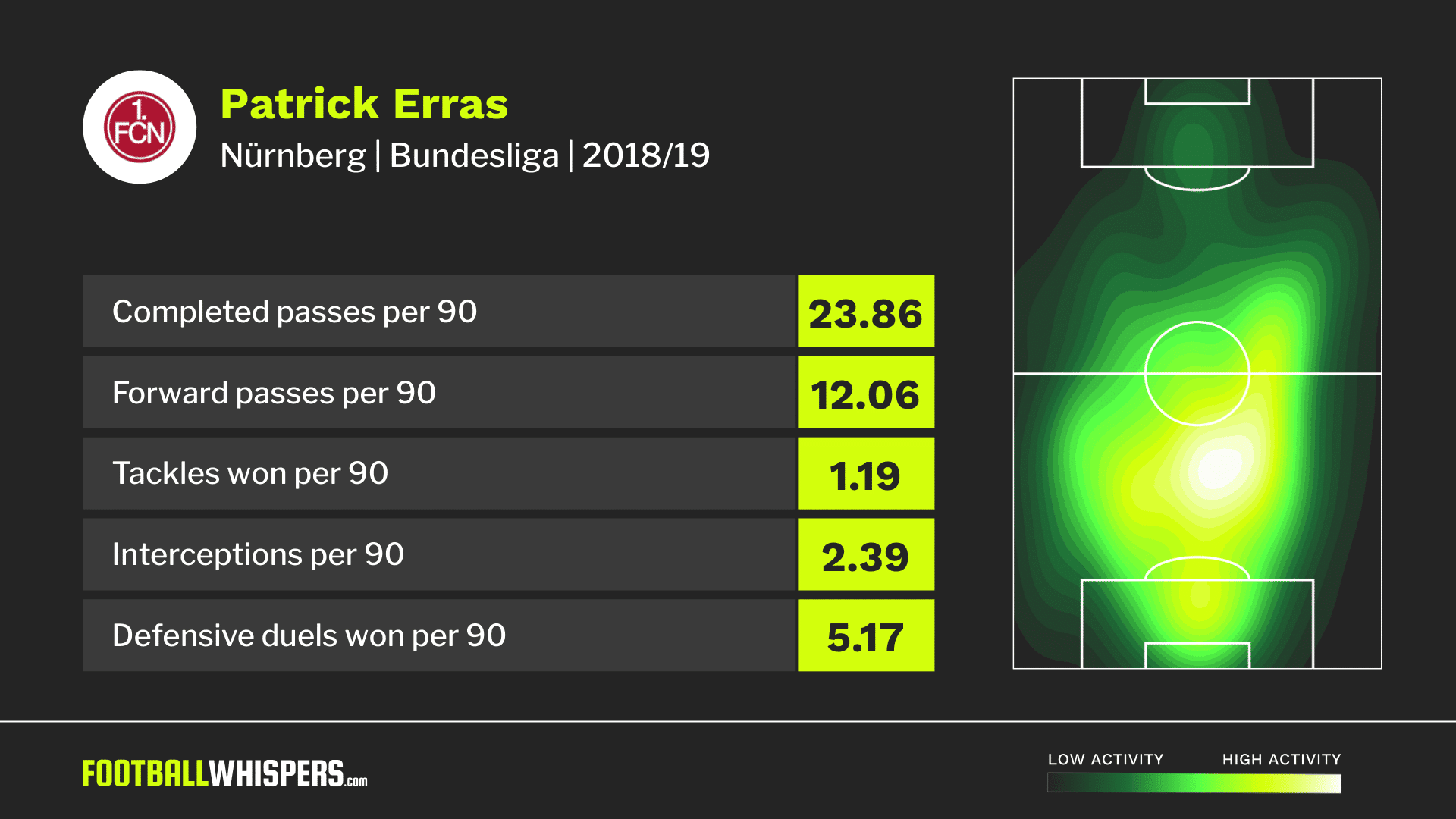 Well, it's not an easy question to answer. Erras, at the time of writing, has played just 677 minutes in the Bundesliga, the equivalent of seven-and-a-half matches. It's not a big sample size to go on.

Of course, his work in the 2.Bundesliga should be taken into account and he played over 40 games for Nürnberg in the second tier either side of a knee injury which kept him out for almost the entire 2016/17 campaign. But it's only against the best in Germany that Erras should be judged.

There are promising signs that he is capable of shining against the best. As the heat map in the graphic above highlights, Erras does most of his work in front of back four.

No team in the Bundesliga average less possession per game than Nürnberg (42.02) so the midfielder's job is to break up opposition attacks and then launch counters.

The first aspect he does well. He is third among midfielders for clearances per 90 (4.24), is sixth for interceptions per 90 and is eleventh for aerial duels won per 90 (3.44).

His work with the ball needs improving, though. At 6ft 5ins, Erras isn't a midfielder who can skip beyond opponents who quickly close him down. And his lack of composure in tight areas often see him hit the ball long.

But he does have sound technique and is able to shield the ball or move it on to a teammate in the defensive third. If he has time in possession he can also find the Nürnberg wingers with well-placed long balls in the channels or the forwards who break behind the defence.

There are undoubtedly areas to Erras' game that need work but Rafael Benítez – should he remain at St James' Park – would almost certainly improve these.

However, given his lack of top-flight experience and Nürnberg's limitations with the ball, the German would be a gamble for Newcastle. Yet it may be an inexpensive one the club opt to take.