Yann Karamoh, remember the name. The young Frenchman has been developing under Luciano Spalletti at Internazionale this term and now looks to have gained a starting spot at a key time in the season.

The winger offers much in character and technique and could be one of the breakout stars next campaign if he is nurtured in the right manner. Whilst he is far from the finished article, his performances have offered the Nerazzurri an attacking threat that they have been craving and provides a directness with pace that has had the Stadio Giuseppe Meazza on its feet at times.

San Siro, February 11, 2018. Karamoh had been handed his first start of the campaign against Bologna as injury to Chelsea transfer target Mauro Icardi forced Spalletti into making a formation change.

The snippets of pace and trickery the Nerazzurri faithful had seen when he appeared previously had left them intensely curious. They would leave the stadium that day infatuated.

In today’s high-tempo game a player running from deep is usually powerful and direct. Against the Rossoblu, Karamoh was to exhibit something slightly different; here he would pick up the ball on the right-hand side, jink past the oncoming defender and slot a pass between two others.

His languid – yet graceful – run was good enough to see him receive he ball back from Rafinha and with quick feet he took on two more before unleashing a 20-yard thunderbolt that, with his weaker foot, gave Antonio Mirante no chance.

As San Siro erupted, Spalletti immediately turned to the coaching staff and, with his hand over his mouth, muttered something whilst looking incredibly serious. After that the crowd, inevitably, expected more. Who was this young upstart – and could he be the next Alvaro Recoba?

After the offerings of recent years they would take another Ricardo Quaresma. Instead, Interisti got to see very little of him until later on this season when, as against Bologna, he replaced Antonio Candreva in the starting XI. Spalletti had, it seemed, quickly taken him out of the spotlight and his recent performances perhaps show why. 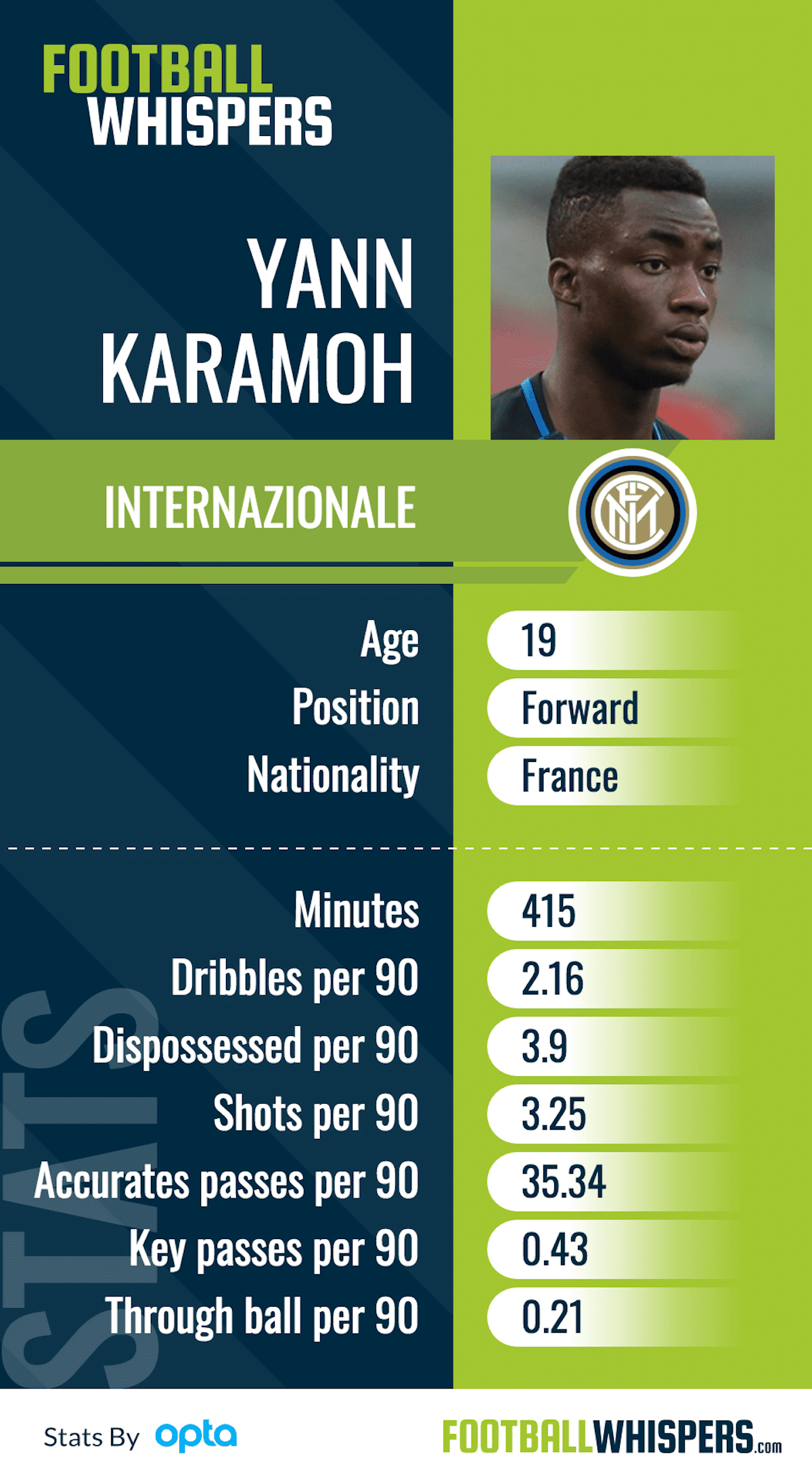 Karamoh arrived on loan from Caen last summer, fresh faced and pretty much unheard of. The loan deal was a two-year contract with obligation to buy. The 19-year-old had obvious talent but little experience. He had appeared 35 times for the French club, netting five goals, and in this time the Milanese scouting network noted his technical and physical qualities.

When he moved to Inter it was noted that in Europe’s top five leagues only Kylian Mbappé, of players born after January 1, 1998, had been involved in more goals.

At the time of writing he has only featured in 13 games for Inter, starting just four. That begs a question of why Spalletti has guarded him from public view. In recent matches that question was answered.

For all the runs that confound defenders, for all the pace that sees him leave men behind and for all the slick passing and willingness to shoot, there is another side to Karamoh.

His decision-making is not quite there; he is not polished, and he makes the wrong choices too often. His finishing needs work and, again, this is as much about the decisions he makes in front of goal as anything else.

Spalletti has evidently seen this in training and throughout the season has allowed him to play a cameo role, showing the world just enough to leave them wanting more. The Bologna game went a long way towards ensuring anyone associated with the Nerazzurri is desperate to see him on the pitch.

The player seems humble and, what’s more, on the pitch he appears incredibly calm. He is happy playing the game and isn’t scared of making mistakes. Much of this is down to the Inter coach who has created this environment for him – and it is paying dividends.

Karamoh has been allowed to make mistakes at the right time and this means he hasn’t lost that sense of adventure or the cavalier approach that is often seen in young talents before being drilled out of them.

Spalletti is now bringing him to the forefront and this could be the making of Karamoh as he is now in situations from the start when it matters.

Inter are reaping what they have sewn and are now witnessing this prestigious young talent attacking defenders, taking men on and offering something they have long been missing. They now have creativity; they have a threat.

He will continue to make mistakes but this, to many,  is fine as long as he can add goals to his already productive wide play. Then he could be one of the stand-out players in Europe next campaign.