Since the mid 1870s there have been two clubs vying for bragging rights as the best club in Edinburgh. Heart of Midlothian and Hibernian have been rivals for over a century, and there is still no sense of which team is the dominant force in Edinburgh.

They started off playing on the same pitch at the East Meadows Public Park, meeting up for the very first time on Christmas Day in 1875. In a story that brings up memories of modern Sunday league football, Hearts started the tie with three men missing, but they still managed to secure a 1-0 victory.

In all that time, they have only met twice in Scottish Cup finals. The last meeting took place in 2012, over a century after the first. Hearts romped to a historic 5-1 victory at Hampden Park, with Rudi Skácel writing himself into the history books with a couple of strikes during his second prolific spell at the club.

Despite the rivalry, players from both clubs teamed up with Meadowbank Thistle (Livingston FC) to create an Edinburgh XI that took on Bayern Munich in 1985. They called the fixture the Festival Cup, and the Edinburgh Select won 2-1 on the night. The squad managed to gel surprisingly easily, but issues with funding meant it was never to be repeated again.

There is a traditional derby match played between the two teams at the turn of the New Year – the Jambos (Hearts) are currently lagging behind the Hibees (Hibs): the overall score currently 32 wins to 30. However, this will be the second season in a row that the closely-fought battle will have called a ceasefire in the league, at least.

Hibs dropped out of the top tier of Scottish football in 2012/13 season; just the second time that had happened to the club since 1980. Although, the green & white army are looking a strong bet to gain promotion at the third time of asking – the last two seasons have ended in play-off heartache at Easter Road. 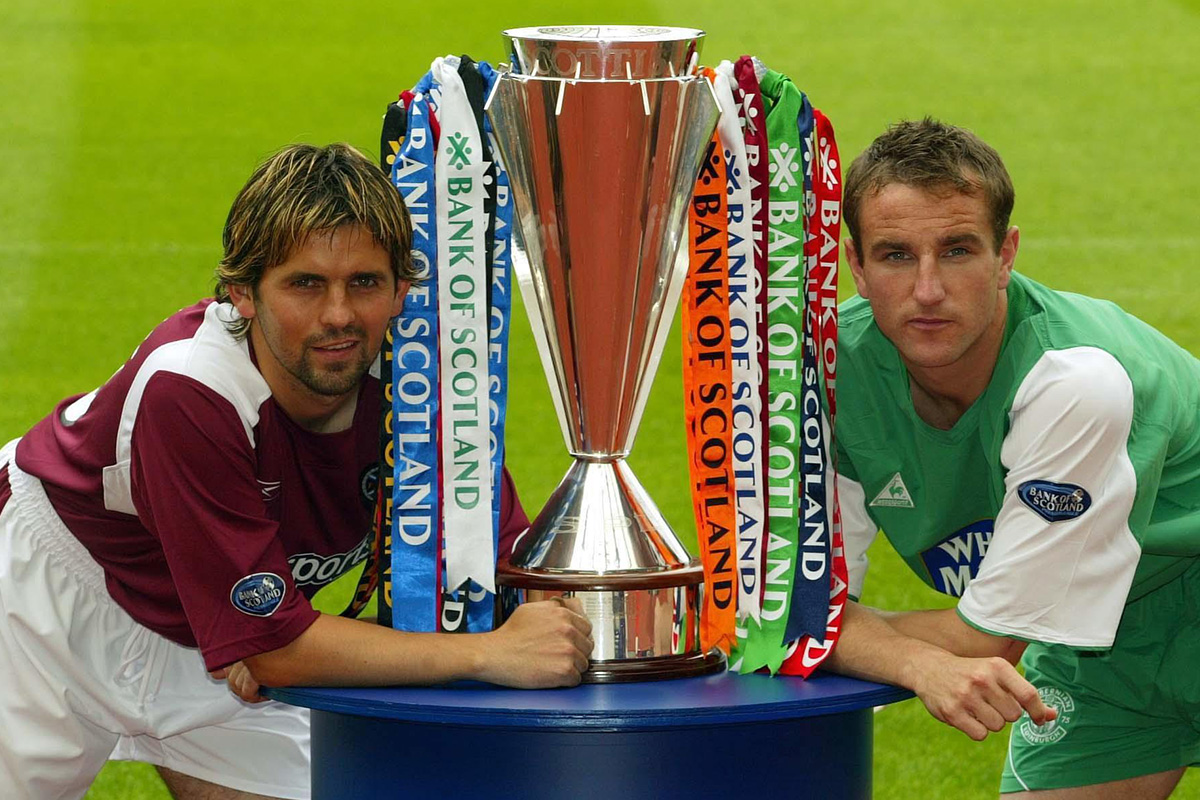 Manager Neil Lennon has taken Hibs to the top the Scottish Championship after the first five games of the new campaign, and attendances are on the rise – averaging at over 15,000 so far this season – after drifting below 10,000 by the end of last season.

With the traditional route to the derby blocked off, we’ll have to see if the Scottish Cup will draw the sides together once more. They rivals last faced off in a Scottish Cup Fifth Round tie in February of this year; lower-league side Hibs coming away as 1-0 winners of a passionate after a 2-2 draw at Tynecastle.

It is fair to say that both clubs have plotted a similar history, and once upon a time there was even outside chance that they would end up sharing even more.

In 1990, former Hearts chairman Wallace Mercer launched a takeover bid for city neighbours Hibs, who at the time were on the brink of financial collapse. Mercer's vision was to merge the staunch rivals and name the new team Edinburgh United. The furore that the proposal caused among club insiders, players and fans alike – including the ‘Hands Off Hibs' campaign – ultimately led to Mercer being forced to back down from his controversial plans.

In the midst of the merger talk, fans invaded the Easter Road pitch several times during a white hot derby on 15 September 1990 – which Hearts won 3-0. The strength of reaction among both sets of supporters went to show that the clubs' identity was worth more important than the prospect of challenging the dominance of the Old Firm and winning silverware.

Nonetheless, it does beg the question, just how good could the fictitious ‘Edinburgh United' – not to be confused with the actual Edinburgh United FC – have been? Together, could they have combatted the Celtic and Rangers stranglehold on the title over the past few decades? A sense of identity is important, but they could have put Edinburgh back on the European footballing map after a long time away from the limelight. 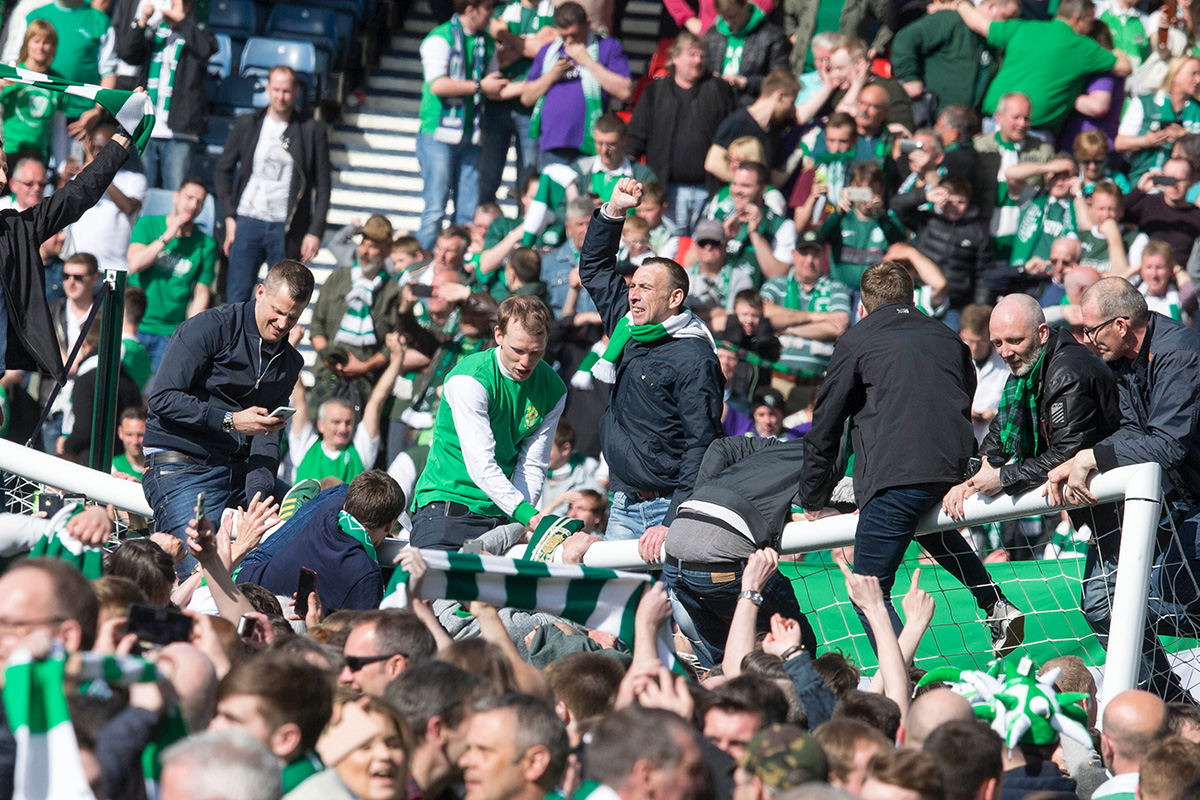 Mercer was right in his assertion that clubs from the capital would struggle to break the Glasgow hegemony. However, both Hearts and Hibs have lifted cup silverware since, including Hibs' Scottish Cup victory last year after seeing off Rangers 3-2 in the final at Hampden Park – Hibernian's first Scottish Cup in 114 years.

Hearts and Hibs both crashed out of the qualifying rounds of this season's Europa League – the Jambos were embarrassed by Maltese side Birkirkara FC at Tynecastle, while Hibs exited to Danish outfit Brondby on penalties (1-1 on aggregate).

Had they pooled their resources back in the early 1990s, would they be any better off? Most probably. But the cost would have been too high for both sets of fans. In any case, it seems like the capital is big enough for both sides, even if they do dilute each other's fan base due to their close proximity – approximately three miles.

Despite the rivalry, there is not the level of animosity found in the other big derby in Scotland. What’s more, both sets of players always seem to raise their level for the Edinburgh derby, and the matches have featured some of the most exciting games in recent memory.

Like Celtic versus Rangers, a league Edinburgh derby has been sorely missed on the Scottish football calendar in recent times as one of the most recognisable matches in British football. Undoubtedly, the future of the Scottish game, domestically and internationally can only prosper from having both clubs back in the top flight. We will have to wait and see whether one or the other can establish clear dominance over the other during the next few decades. If the past is any indicator, there won’t be much between them in Edinburgh.