It's an intriguing story how the Revierderby between BV Borussia 09 e.V. Dortmund (Borussia Dortmund) and Fussballclub Gelsenkirchen-Schalke 04 e.V. (Schalke) has developed into one of the fiercest rivalries in football.

In the early days, the rivalry was essentially founded as the match between the coal miners of Gelsenkirchen, who represented Schalke, and the steel workers of Dortmund – the cities separated by a mere 32 kilometres. Schalke were by far the better side when the first recorded derby was played in 1925 and duly won 4-2.

Featuring club heroes, Fritz Szepan and Ernst Kuzorra, the famous Schalker Kreisel – or Schalke “spinning top” – team would win all three of the clashes in the 1920s, with a 7-2 humiliation of Dortmund in 1927 the standout. 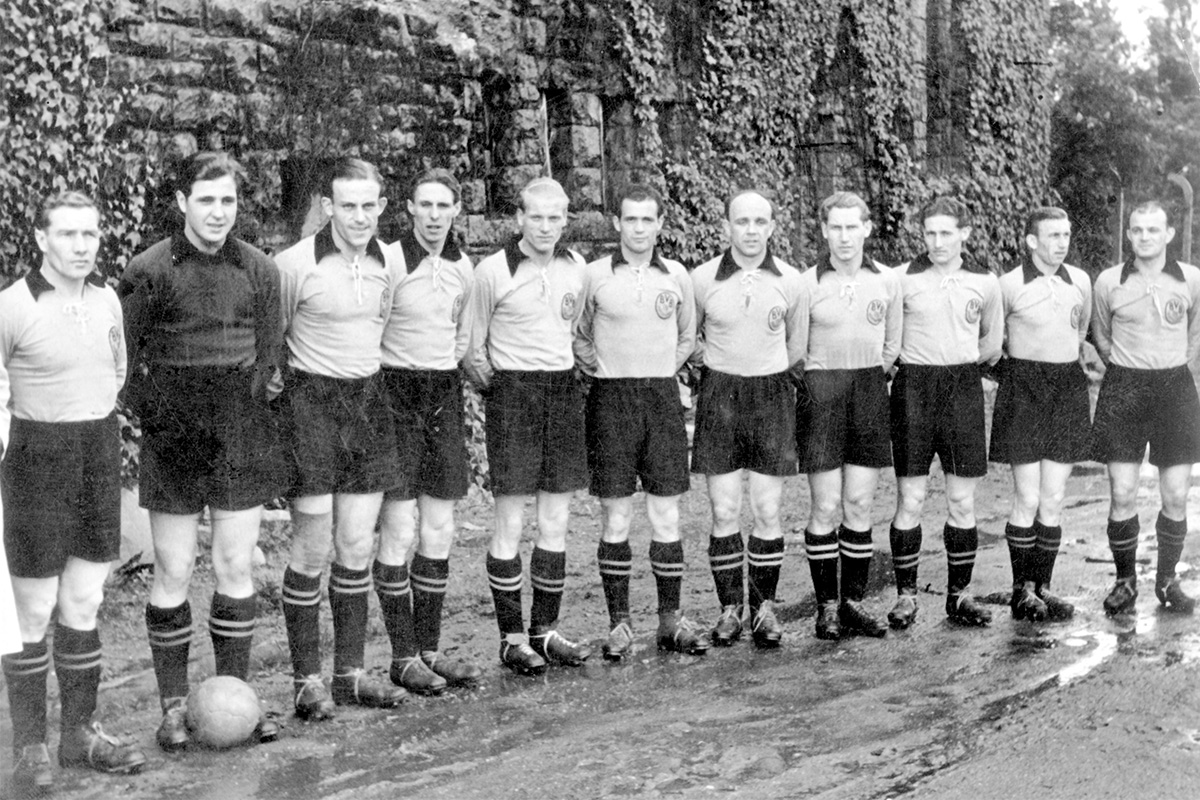 The Konigsblauen would continue their domination into the 1930s and 40s, remarkably winning 14 of the 16 battles between 1936 and 1944. Indeed, Schalke's 1940 side still hold the record for the fixture's biggest ever victory when they romped to a devastating 10-0 victory – which serves as testament to the brilliance of a side who won six of their seven German championships during that period.

Although it took Dortmund until November 1943 to register their first ever victory, with August Lenz's goal proving the drought breaker, the scales emphatically remained tipped in their opponent's favour.

Following the Second World War, however, the rivalry received a real injection of drama. The 1947 edition can be traced as one of the earliest catalysts that elevated their battles to a new level. Dortmund won an engrossing contest 3-2, in a match where they incredibly came from behind twice to snatch victory in the dying seconds of the match.

Condemning Schalke to such a heartbreaking defeat gave BVB (Dortmund) and their long suffering fans the confidence and belief to kick start their own spell of supremacy.

From 1947 to 1963, Dortmund embarked on a sensational spell that saw them run out victors in nine of the next 13 derbies. In addition, Die Schwarzgelben also won three domestic titles in that time to ensure their status atop, the now underachieving, Schalke. But while Die Knappen underperformed against BVB, they did still notably manage to win the 1958 title. 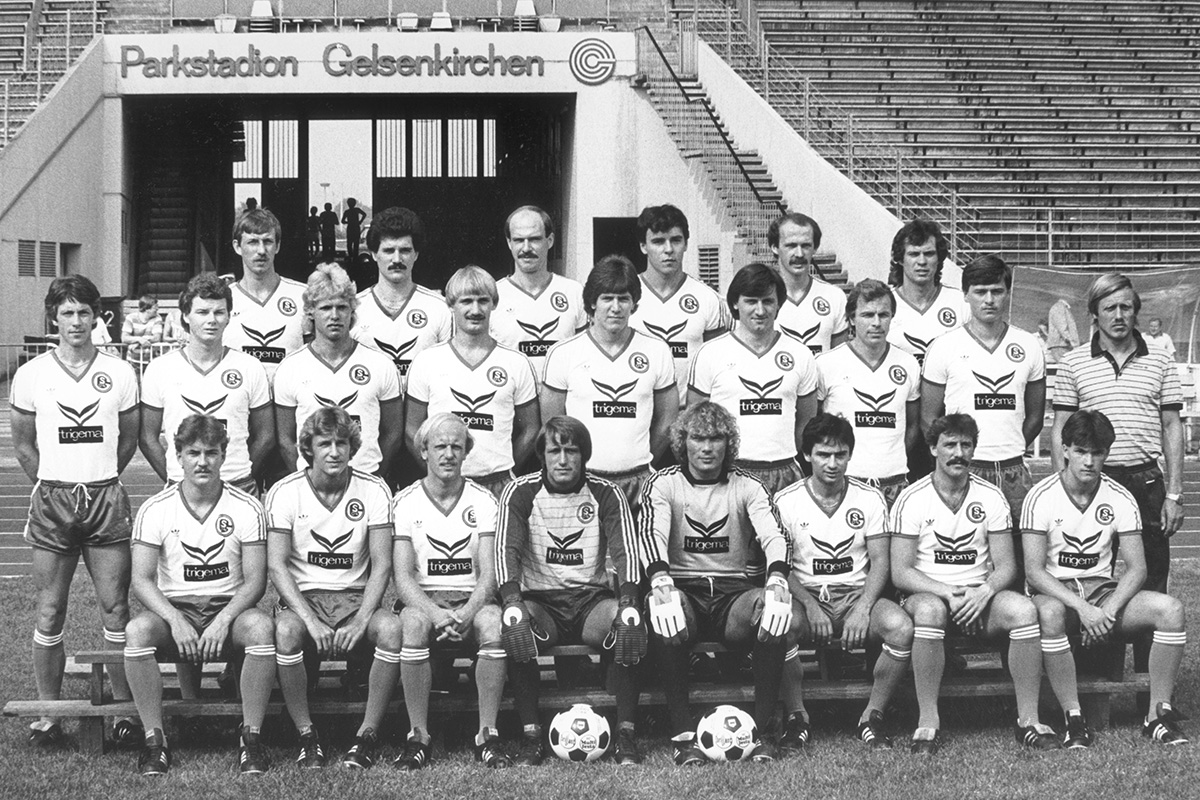 Despite their being palpable tension between the two clubs, Gregor Schnittker, a Revierderby expert, told ESPNFC that the derby was yet to completely take off. “Even as late as the 1960s, the rivalry between Schalke and Dortmund was fairly normal,” he said.

“There were none of the things that would soon become the norm: no hatred, no riots, no violence. Looking back, there was certainly some underlying tension that only needed some sparks to erupt. But at the time, the rivalry between Schalke and Essen on the one hand and Dortmund and Cologne on the other was more intensely felt.”

1963 signaled the beginning of the Bundesliga era, but it would also coincide with the two Ruhr giants going through difficult times. With the collapse of the steel and coal industries across the area, and the shocking unemployment that followed, the two clubs inherently began to struggle. Their fans were depressed and living in fear, hugely worried about their future, and the impact played an immense role in Dortmund and Schalke's downturn in fortunes.

Although BVB won eight of the opening 10 Bundesliga derbies, amid all the doom and gloom surrounding the area, they eventually suffered relegation in 1972. Indeed, Schalke's 3-0 rout of them that year cruelly rubbed salt into Dortmund's wounds. It took them four years to return to the top flight, which meant no derbies were played for during that period.

Unsurprisingly, Schalke enjoyed a period of success once the sides were reunited. Dortmund, who hadn't won a derby since 1968, finally got their name back on the winners' list with a 1-0 win in 1977. A rough trot would soon ensue for both clubs, as they were regularly in relegation fights, as opposed to their former place challenging for titles.

As the 1980s rolled in, Schalke's decline saw them spiral into relegation in 1987 and it heartbreakingly for the Blues' fans it would take them five years to return to the top flight. 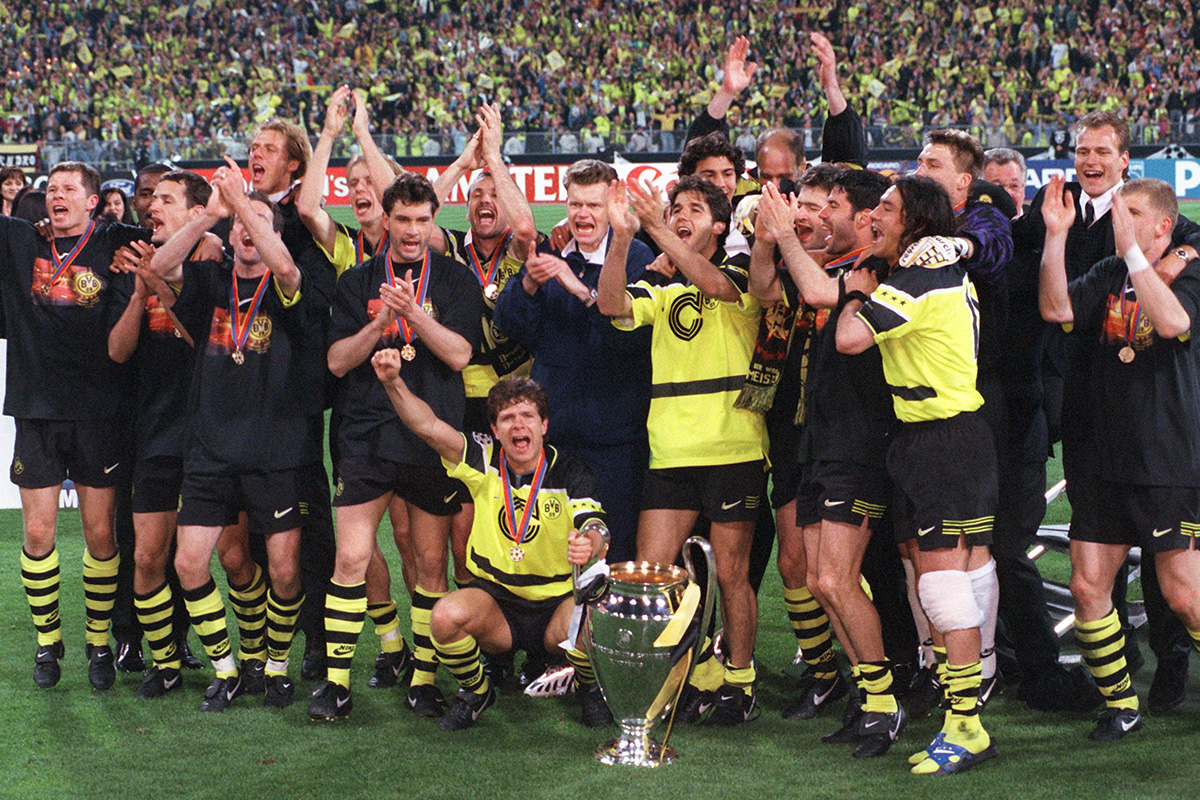 Conversely, Dortmund had begun to assert their dominance on German football as they headed into a massively successfully era in the 1990s – back-to-back Bundesligas in 1994/95 and 1995/96 were followed by the club's only Champions League trophy in 1996/97 with a 3-1 final win over Juventus in Munich.

As coincidence would have it, Schalke were also victorious in Europe that year, beating Roy Hodgson's Inter over two legs (1-1 on aggregate AET, 4-1 on penalties) to lift the 1997 UEFA Cup and give their fans something to be proud of – but they were still unquestionably a distance behind the Yellow and Blacks. 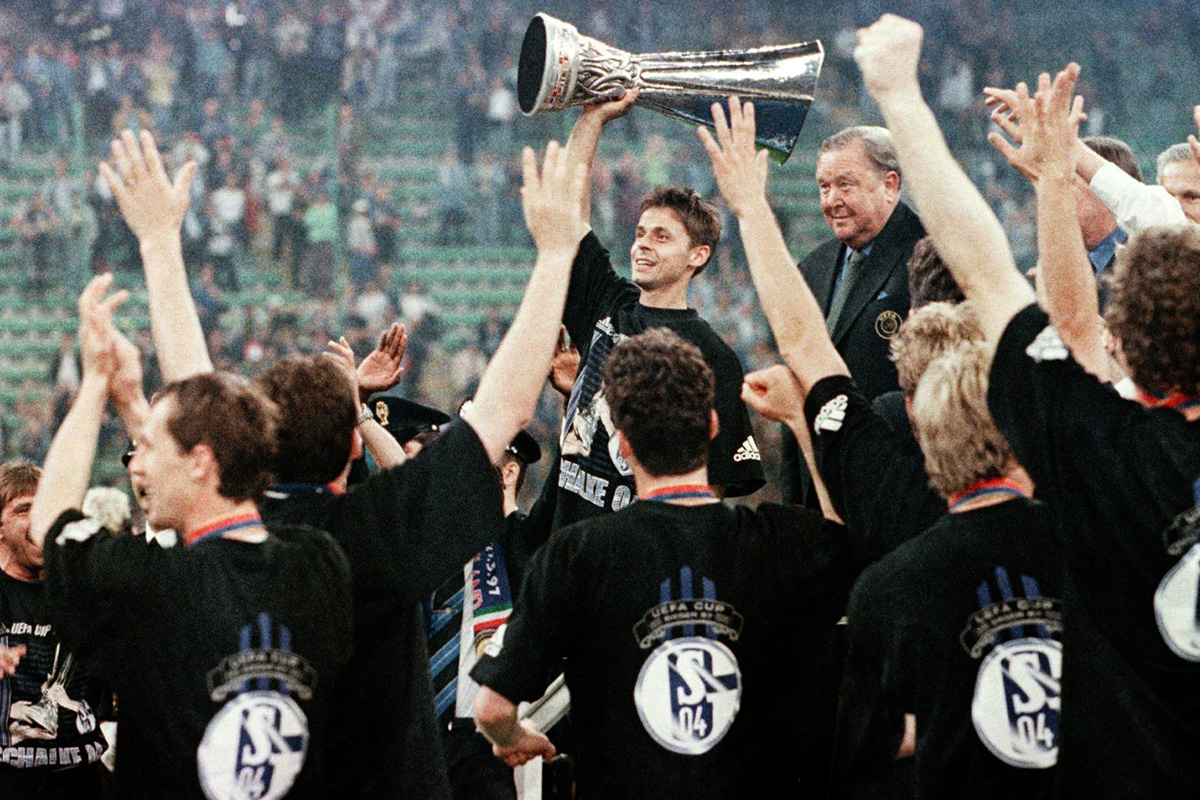 Seeing as Dortmund now believed they had bigger fish to fry, they began to take the derby less seriously, as their main battles were now fought against the likes of Bayern Munich, Juventus and Europe's elite in the Champions League. The fact that Dortmund, despite achieving such great things in this time frame, lost 15 consecutive derbies from May 1999 to May 2005 suitably illustrated this.

BVB then went through a very challenging stage, when, in 2005, the club was very nearly forced into bankruptcy, which left them needing to sell many players just to keep the club afloat.

At this juncture, the Ruhr clubs' intense duels had become so absorbing to the public that the match was now being shown on free to air television. And when Dortmund won their first derby in almost seven years, it only got bigger.

The tables had now turned back in BVB's favour and shortly after they inflicted a savage blow on their rivals. With Schalke sitting pretty atop the Bundesliga table in 2007 heading into the season's  penultimate round of fixtures, Dortmund, who had been struggling away at the opposite end of the ladder that term, remarkably defeated the Blues 2-0. The victory condemned Schalke, who'd been in first place for three months, to a second-place finish and allowed Stuttgart to rise up and clinch the title.

Relishing in their adversary's failure, the Dortmund fans began selling merchandise to commemorate the occasion. They didn't stop there either, in 2008, they smugly also celebrated the 50-year anniversary since Schalke had won a league crown.

Although Dortmund have obviously been the far stronger outfit in recent times, the rivalry still remains unbelievably feisty, with the noise produced by the fans of both sides as loud as you'll hear anywhere in world football. 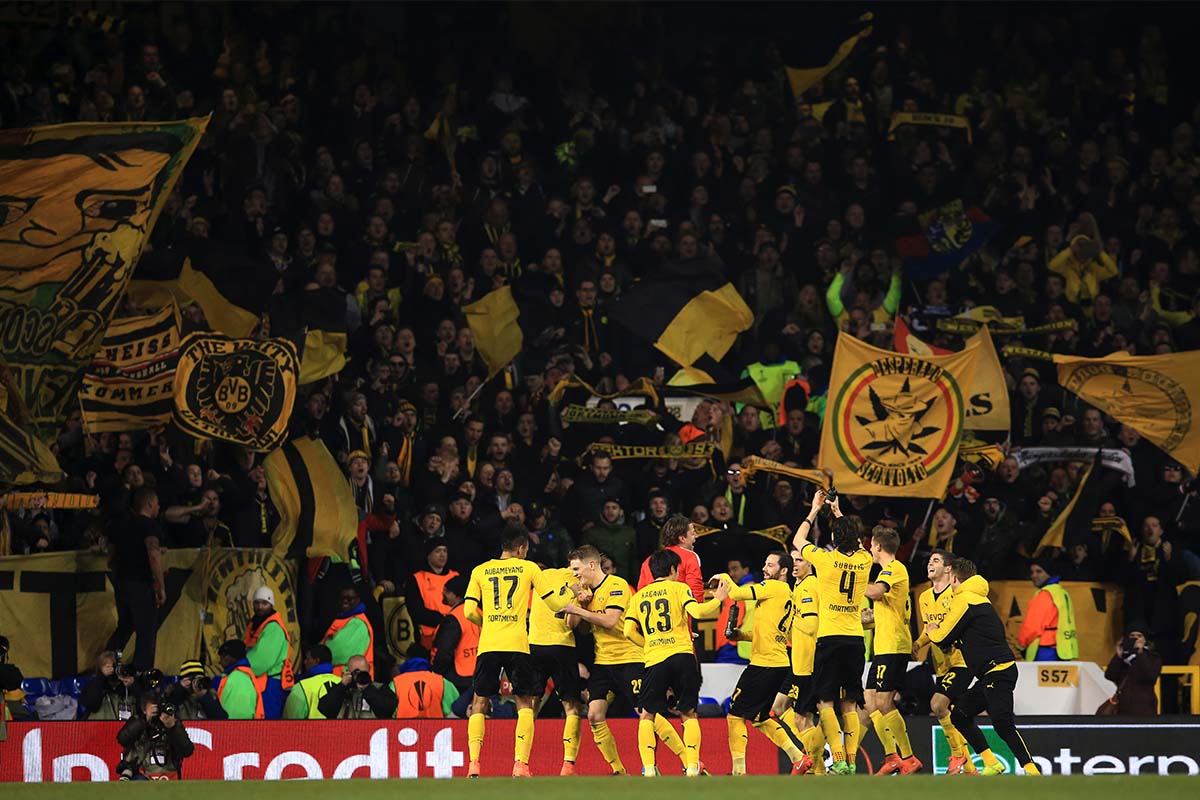 By the numbers, however, Schalke's 58 wins (compared to Dortmund's 51) sees them just ahead, which is some consolation given Dortmund's recent spell of success.

Some 91 years since their first meeting, the teams will reignite their rivalry in the first derby day of the 2016/17 season on 28 October – a match that will be another must see event.

The Revierderby may not be the oldest derby on the planet but it has arguably developed into once of the the fiercest.