Flairs, ticker tape and a stadium tangibly bouncing under the weight of thousands of jumping fans. Whether at La Bombonera or El Monumental, the Superclásico Buenos Aires derby between Boca Juniors and River Plate is always the most heated, passionate and intense fixture on the planet.

Nothing divides a city quite like a local derby between its two biggest and most prestigious teams, but, for the fans of Boca and River, the Superclásico represents more than just a tribal rivalry.

Each generation inherits an allegiance to a certain set of colours, and the inherent despising of one another; it has come to symbolise the divide between the social classes of Argentina’s capital – River Plate synonymous with affluence and Boca Juniors seen as the club of the blue collar everyman. 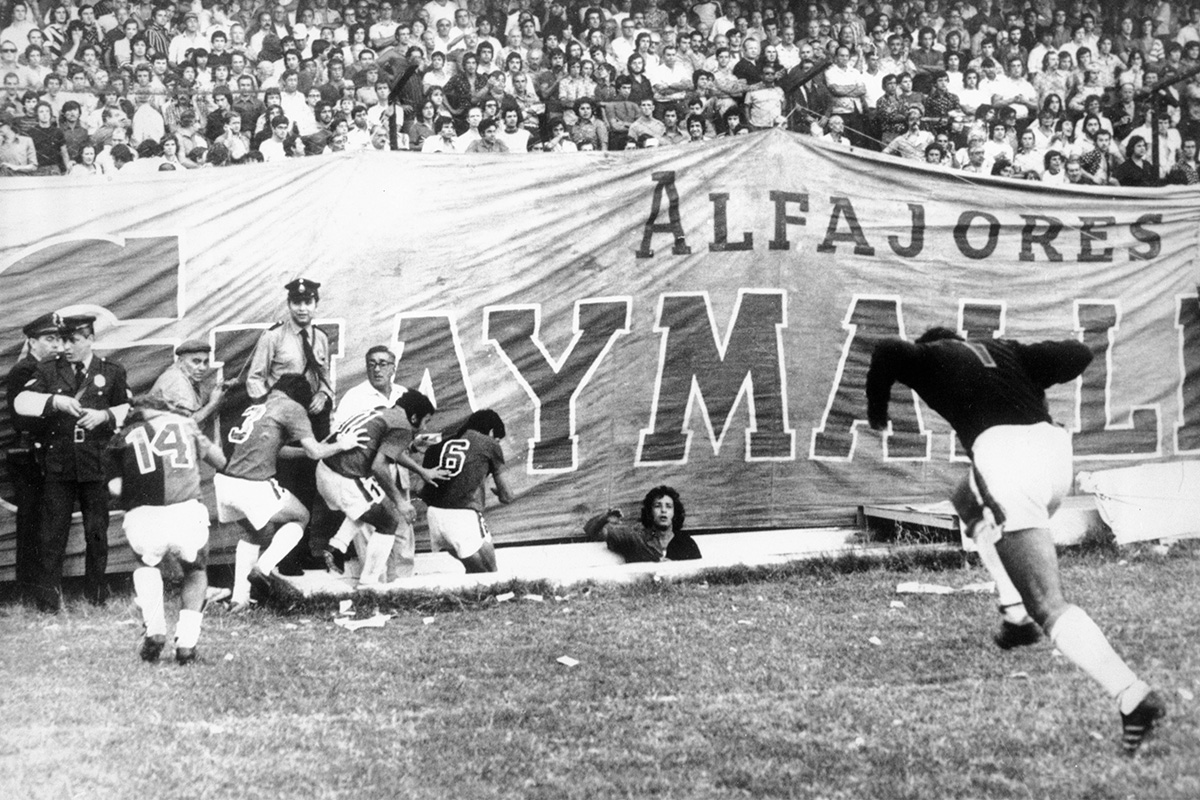 The folklore of how Boca came to wear their famous blue and yellow goes that the Italian dock workers were discussing how their new team should be attired, when a Swedish ship passed by them. The men were attracted by the blue and yellow of the national flag flown on the vessel, and the rest is history.

The first derby was played on 25 August 1913, with River winning 2-1. Since then, the two sides have faced off 359 times, with Boca edging the head-to-head by virtue of their 132 victories to River’s 114, and 113 contests ending with honours even.

In 1925, River Plate moved from the docklands of La Boca to the affluent Núñez district of Buenos Aires, and this is where the divide between the two clubs finds its origin.

When the Argentinian game turned professional in 1931, River started splashing the cash to attract some of the country’s top stars. In came winger Carlos Peucelle for $10,000, followed by the arrival of forward Bernabe Ferreyra for a whopping $35,000 fee.

The move to the plush Núñez neighbourhood, coupled with their lavish spending on players, earned River the nickname Los Millonarios, and, almost a century on, the white and red Superclásico contingent are still referred to by the same moniker.

Boca prefer their side to be characterised by grit and determination, rather than the perceived flightiness and flair of their rivals. To Boca followers, River are gallinas (chickens) because they lack guts and don’t possess the same ruggedness as the men in blue and yellow. The nickname is also apparently born out of Boca’s mocking of the way their bitter rivals threw away a two-goal lead against Peñarol in the 1966 Copa Libertadores final.

And River call Boca chanchitos (little pigs), claiming that their stadium, located in a poorer part of the city than River’s, smells like a pigsty. Then there’s the even more antagonistic slur of bosteros (collectors of manure), which River fans level at their counterparts due to the notoriously polluted river that runs through La Boca. 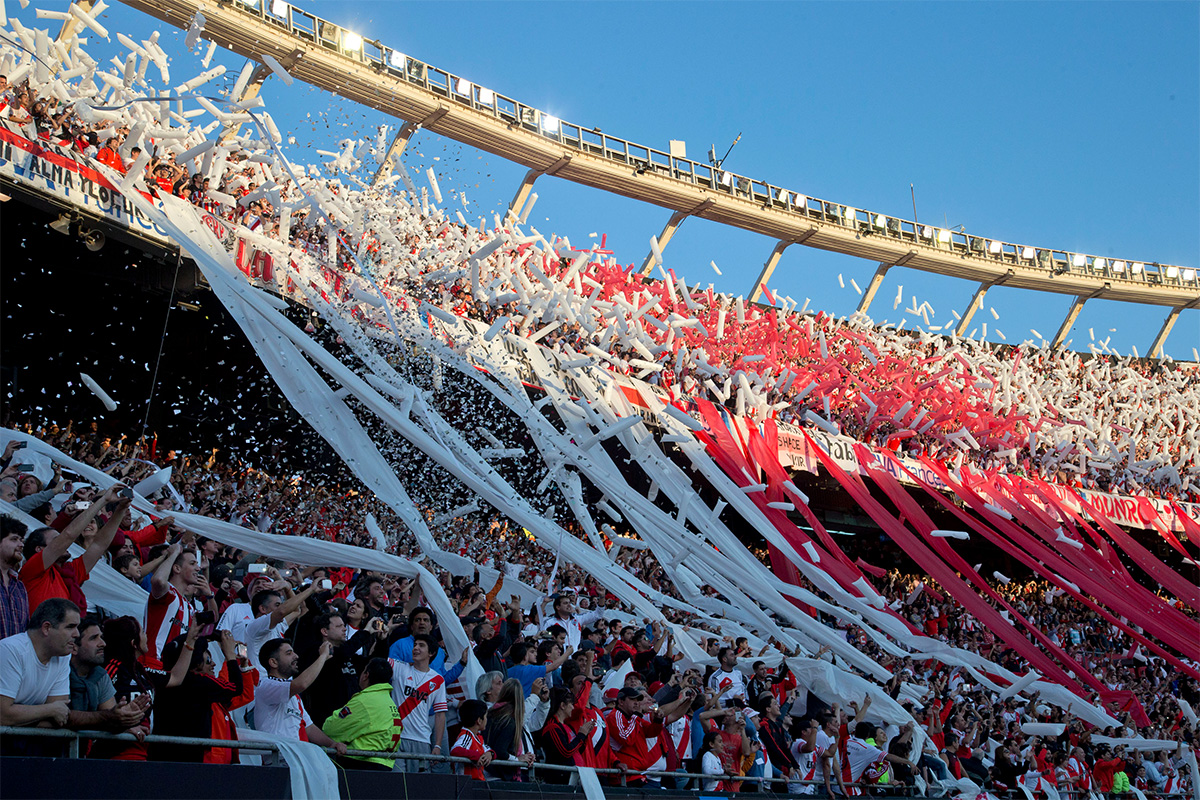 Rather fittingly, this intense and fabled rivalry is staged in two of the most iconic stadiums in the world. River Plate’s Estadio Monumental Antonio Vespucio Liberti – better known simply as El Monumental – can house over 60,000 fans, and was host to eight matches during the 1978 World Cup in Argentina, including the home nation’s 3-1 win over the Netherlands in the final.

With its circular shape and steep, sloping stands, El Monumental becomes a cauldron of noise on match days, and never more so when Boca are visiting. The image of a white and red bowl of River supporters, with ticker tape strewn from the top of the stands to the bottom, is synonymous with Suerclásicos at El Monumental.

Boca’s Estadio Alberto J. Armando – better known as La Bombonera, which translates as ‘the chocolate box' – is one of the most unique and instantly recognisable grounds in world football. 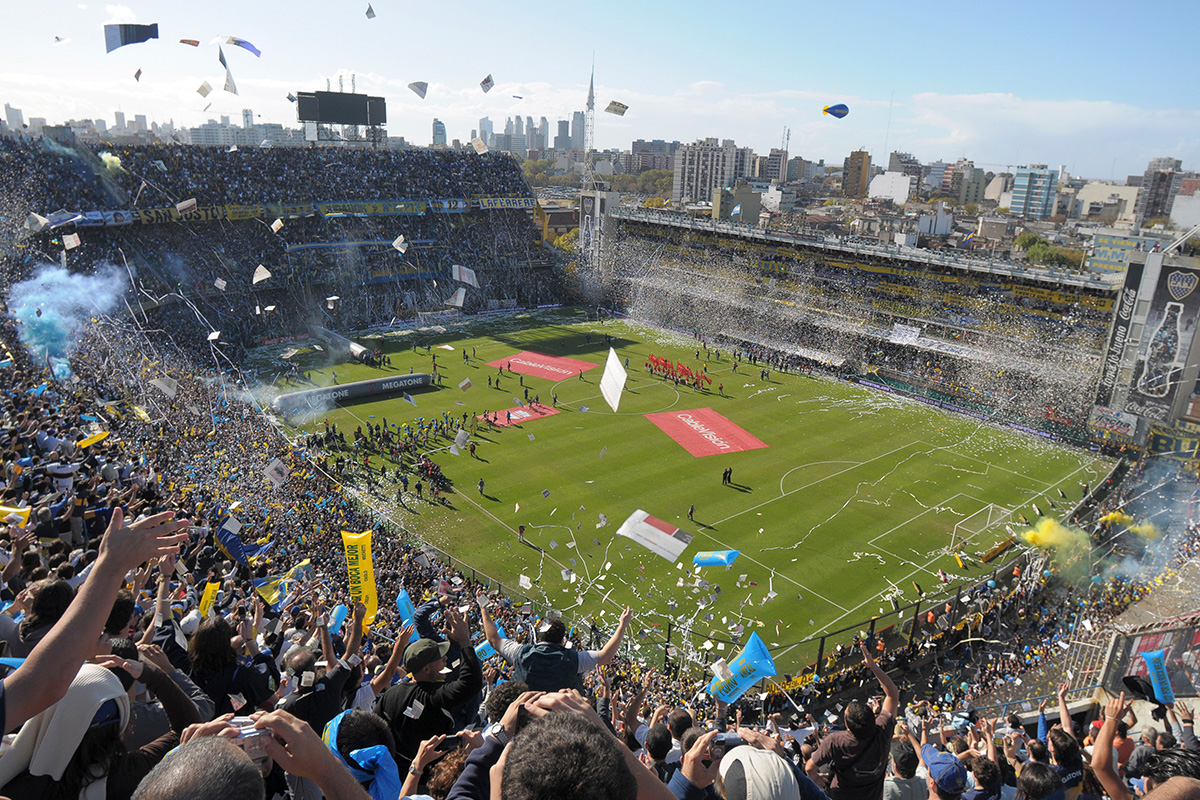 With a flat, straight stand on one side surrounded by three steep, curved stands, La Bombonera stands out for its unique ‘D' shape. The 49,000 capacity means it holds fewer supporters than El Monumental, but La Bombonera does not lack an ounce of atmosphere on derby day, with Boca fans often seen climbing up the high safety fences which surround the pitch.

The emotions between the two opposing sections of fans can often overspill into violent clashes, and there is always a heavy police presence whenever Boca and River meet. And on 23 June 1968, tragedy struck when 71 fans lost their lives in a crush at El Monumental, with fan unrest thought to be the cause.

Although the exact reason for the disaster is not known, some reports suggest that Boca fans threw a burning River Plate flag from the top tier, landing in the lower section which contained their own fans, causing a panicked rush for the exit. While others claim that the exit gate was overwhelmed when River fans entered the Boca section to confront their rival supporters.

In a situation eerily reminiscent of the 1989 Hillsborough tragedy, former River Plate president William Kent claimed that the police were to blame, as they prevented the flow of supporters from leaving the stadium. An official inquiry found no guilty party. 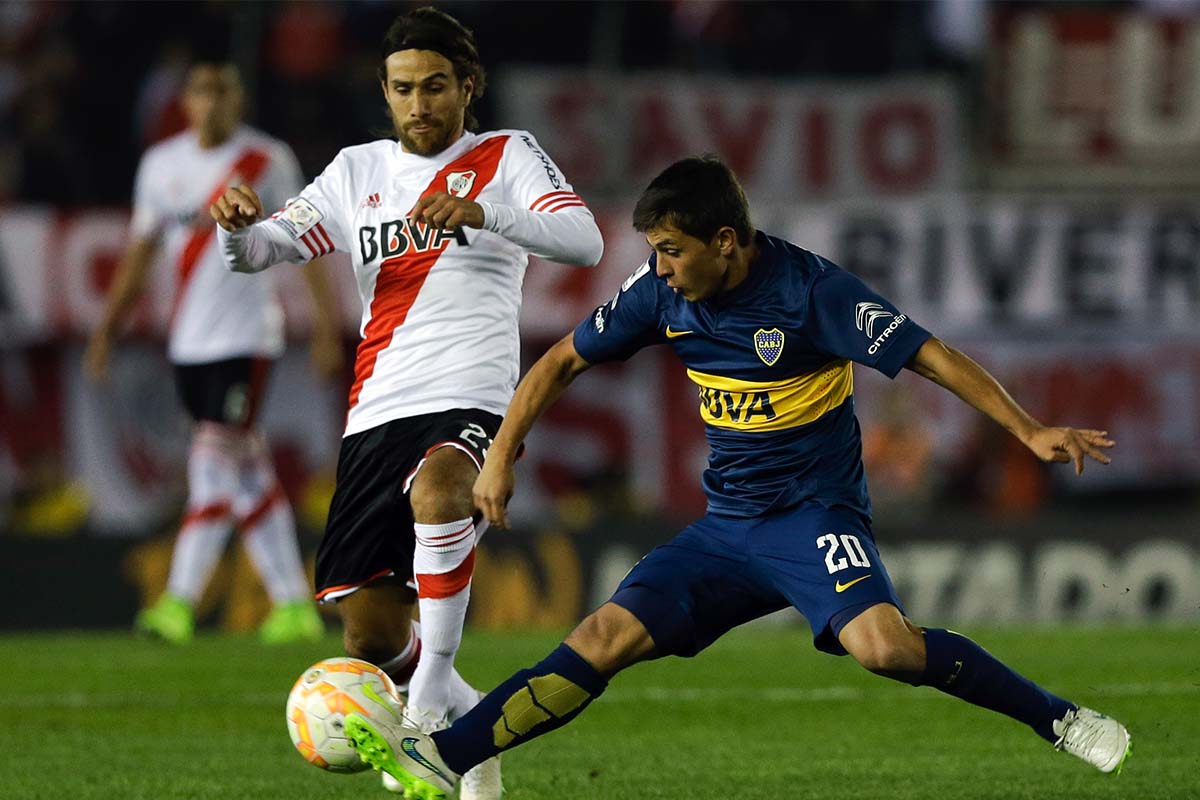 There has been a surprising number of players who have represented both River and Boca, with Gabriel ‘Batigol!' Batistuta, Claudio Caniggia and Abel Balbo among the most notable – Boca's skilful Adrian Cubas is the latest wonderkid to grace the derby.

Oscar Ruggeri moved from Boca to River in 1985, and said of crossing the divide: “One side looks on you as a traitor and the other doesn’t really trust you. You need time to adapt and a lot of character to win them over.” 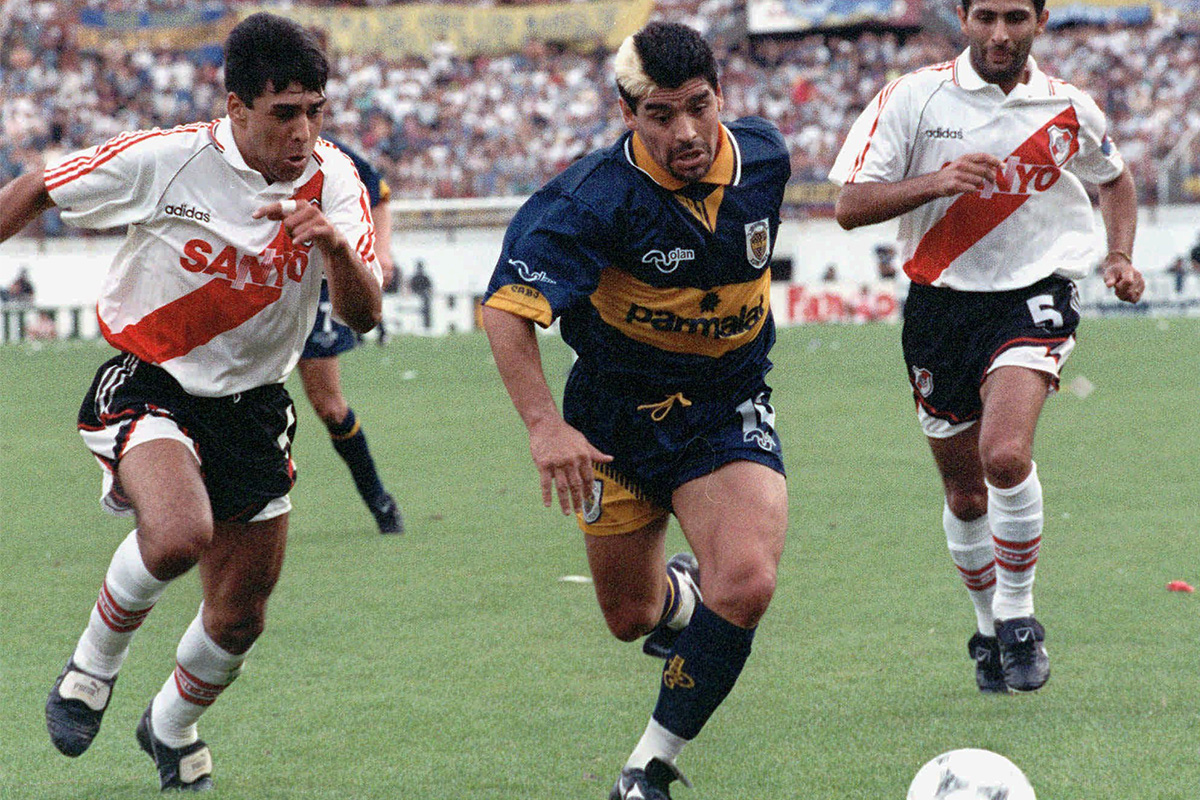 Enzo Francescoli and Diego Maradona, legends of River and Boca respectively, both openly said that they would never even consider representing the other side of the great rivalry during their careers.

The two clubs are the dominant forces in Argentinian football; River have won 36 championships and Boca have 31, the next most regular Argentinian title-winner is Racing Club, with a comparatively paltry 17.

And although River edge the head-to-head in terms of domestic titles, Boca have won the Copa Libertadores six times (four times since the turn of the century, and three under the tutelage of Carlos Bianchi), with River trailing behind with three – although, the most recent of which was secured last year.

Boca Juniors and River Plate are two clubs who stand for opposing values, and who despise one another. But the constant peering over the neighbour’s fence to see what the other side is doing, has spurred each on to greater success. They may not get along, but the rivalry sustains them.