Nowadays, £3million can barely buy you a Championship player.

In a transfer window which saw second-tier Middlesbrough buy Ashley Fletcher from West Ham United for £6.5million after the 21-year-old failed to score in the Premier League, it wouldn’t be expected to buy a player that could thrive at Premier League level for less than half the cost.

Yet, Brighton & Hove Albion spent £3million on Pascal Groß this summer from German side Ingolstadt.

That's 63 per cent of Brighton's 11 goals he's been directly involved in and he’s looking like the bargain of the last transfer window.

It’s no surprise to his team-mates though, with Liam Rosenior singling him out for praise in pre-season.

“To have a No.10 that can play between the lines and from deeper is another really good weapon to have,” he told The Argus.

“So far he has showed in training and games his quality.

“He can play with both feet. His set pieces are great as well as open play, so he’s another great addition to the squad.”

He’s gone on to prove that as well. While he is known as a set-piece specialist, that hasn’t been what he’s made his name with the Brighton fans for yet.

Instead, they have been taken in by his work rate.

He has covered a total of 129km this season.

Out of the top-flight players in England, only Burnley‘s Jack Cork and Watford‘s Abdoulaye Doucouré have run more.

His tireless work rate is invaluable to a side who are averaging 45.6 per cent possession. 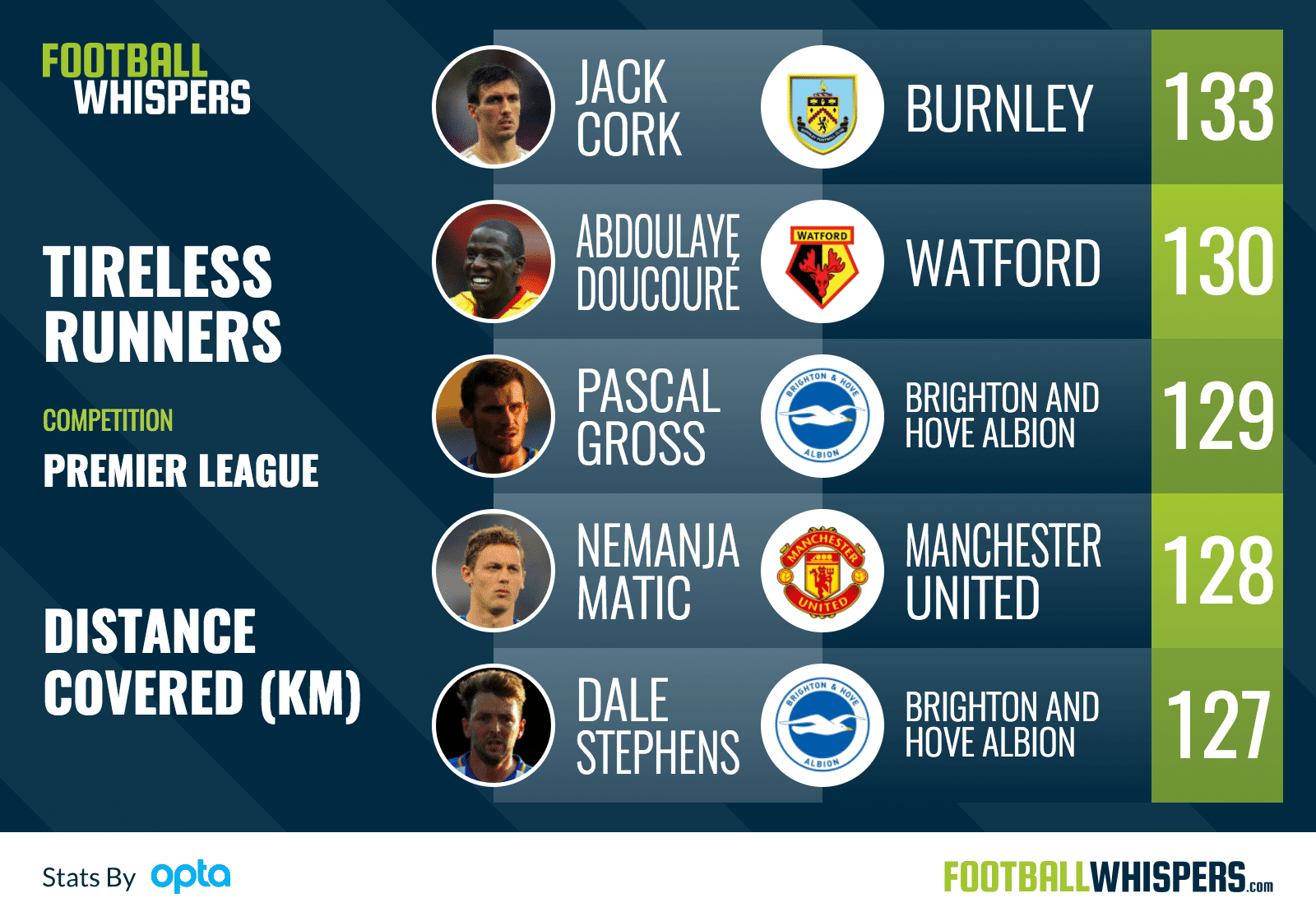 In their first win of the season, the 3-1 victory over West Bromwich Albion, it was that work rate that led to their third goal, with Groß winning the ball in the opposition’s half before crossing for Tomer Hemed to score.

Groß' engine hasn’t come as a surprise to those who watched him in Germany.
Brighton defender Uwe Hünemeier told The Argus: “I knew about his running from Germany – absolutely. And probably we need that. But I always expect different things from him, not just running.

“He has to create chances. He is good on set pieces, diagonal balls, creating.

“He is not all about running but that is one of his big strengths.

It was no surprise that it was Groß who was involved in all three goals (he scored two and assisted one) against West Brom – Chris Hughton’s sides first goals since they were promoted to the Premier League.

He probably deserves the honour of his club’s first top-flight goal since Gordon Smith netted in a defeat to Norwich City more than 34 years ago.

In a side that unsuccessfully battled relegation last year, Groß created the most chances (99) in the Bundesliga.

That was only bettered by Kevin De Bruyne (101) and Christian Eriksen (111) in the Premier League last season – certainly not bad company for Groß to find himself in.

He is already proving himself to be the Seagulls’ main creator, averaging 2.2 key passes per 90 minutes. The next Brighton man to have made more than two appearances to follow that is Anthony Knockaert, with 1.5.

Despite his good start, though, Hughton is refusing to call him a bargain just yet.

“That will only be determined at the end of the season,” he said.

“But we've benefited from having him here early and being here for that time. It's allowed us to work with him and for him to settle in.

“It's a very difficult market, especially for a team that's just come up, and some aspects of it we found difficult. If you can do your business early in the transfer window then sometimes it can pay off.

“We're fortunate that he was one of our first summer buys. He's very knowledgeable about the game, about the English game, and he speaks very good English which has helped from day one.

“He's someone that wants to get better and is very serious about his football. He's a team player, somebody that you can have good football conversations with.

“He hasn't missed too many games in the last few years and he's very experienced.”

Despite his two goals, Groß claims he isn’t a goalscorer though.

That record is backed up by only five goals in 31 appearances for Ingolstadt last season.

He told The Argus: “I don’t know if I am really a goalscorer.

“Maybe I am more the type to make assists, but, in this system, I come into situations where I can shoot or make the last pass.”

And if he does feel Brighton’s style of play opens up more chances for him to find the back of the net, especially with them failing to buy an out-and-out goalscorer this summer, the £3million will turn out to be a bargain indeed.

There was a time when we measured players’ fees in Michus; if Brighton’s German carries on like it is, it could very well be Großes. He’ll just hope to stay at the top of his game for longer than the former Swansea City man.