‘Pascal Groß to Liverpool’ is the kind of transfer rumour that’s hard to place.

It’s not so ridiculous that it can be immediately dismissed, but it’s not obvious enough to be treated without suspicion.

Groß, the Brighton player? The one who has one goal and zero assists in an injury-impacted season? To join a team for whom ‘heavy pressing’ is still one of their characterising features?

But then for only £15million, according to the rumour. And a player who Jürgen Klopp presumably knows quite well.

Here’s what to make of the matter.

The case for yes

Klopp has been transitioning Liverpool to a 4-2-3-1 this season, as Football Whispers analysed earlier in the year. The Groß rumour — assuming it’s true — would be confirmation that the formation is here to stay. The German would slot into the role behind the striker, a position he most usually occupies for Brighton.

He may not have played for Klopp before, but he has played for the ‘Klopp of the Alps’ Ralph Hasenhüttl, newly arrived down the coast at Southampton. Hasenhüttl’s three years at Ingolstadt overlapped with Groß’s time there, and the new Saints boss has said that he spoke to the player before arriving in England.

The link between the two has led to rumours that Southampton, too, are trying to pry Groß away from Brighton. Liverpool would surely be favourites if it was a choice between the two given their place in the pecking order (or food chain).

While Ingolstadt were a small team, they were one who pressed surprisingly high up the pitch. Groß also played in a variety of midfield roles there, meaning that he’s both tactically flexible and is also likely to understand any pressing scheme that Klopp concocts quite quickly.

Part of the reason why Fabinho and Naby Keïta have been eased into playing time this season has been because they’ve needed to learn the pressing organisation.

“We will have to work for it because it is not like you can throw players on the pitch and just tell them to do it,” Klopp said earlier this month. “It doesn't work. It didn't work with Fabinho. It did work really well with Naby in the beginning, but then he got an injury and the team did really well. If things are working then you keep them.”

In theory, Groß could be brought in as an extra body who won’t need much training up tactically. He’ll have seen so many variations from the point of view of so many positions, that it should be easy to pick up.

It’s undeniably that Groß has a great delivery as well. Since 2016/17, he’s created the second-most shots from set-pieces in Europe’s top five leagues, behind only Dimitri Payet.

He also has a good understanding of space. “I had the eye to see this fast – the little gaps when I can play to my team-mates,” Groß said when he joined Brighton. “I think it’s one of the good things I have – the last pass, or the last cross when a striker goes.”

This eye for the little gaps works both for passes and his own runs. In Brighton’s match against Liverpool earlier this season, Groß fashioned a free header by noticing the position of the centre-backs and cutting into the space they left. 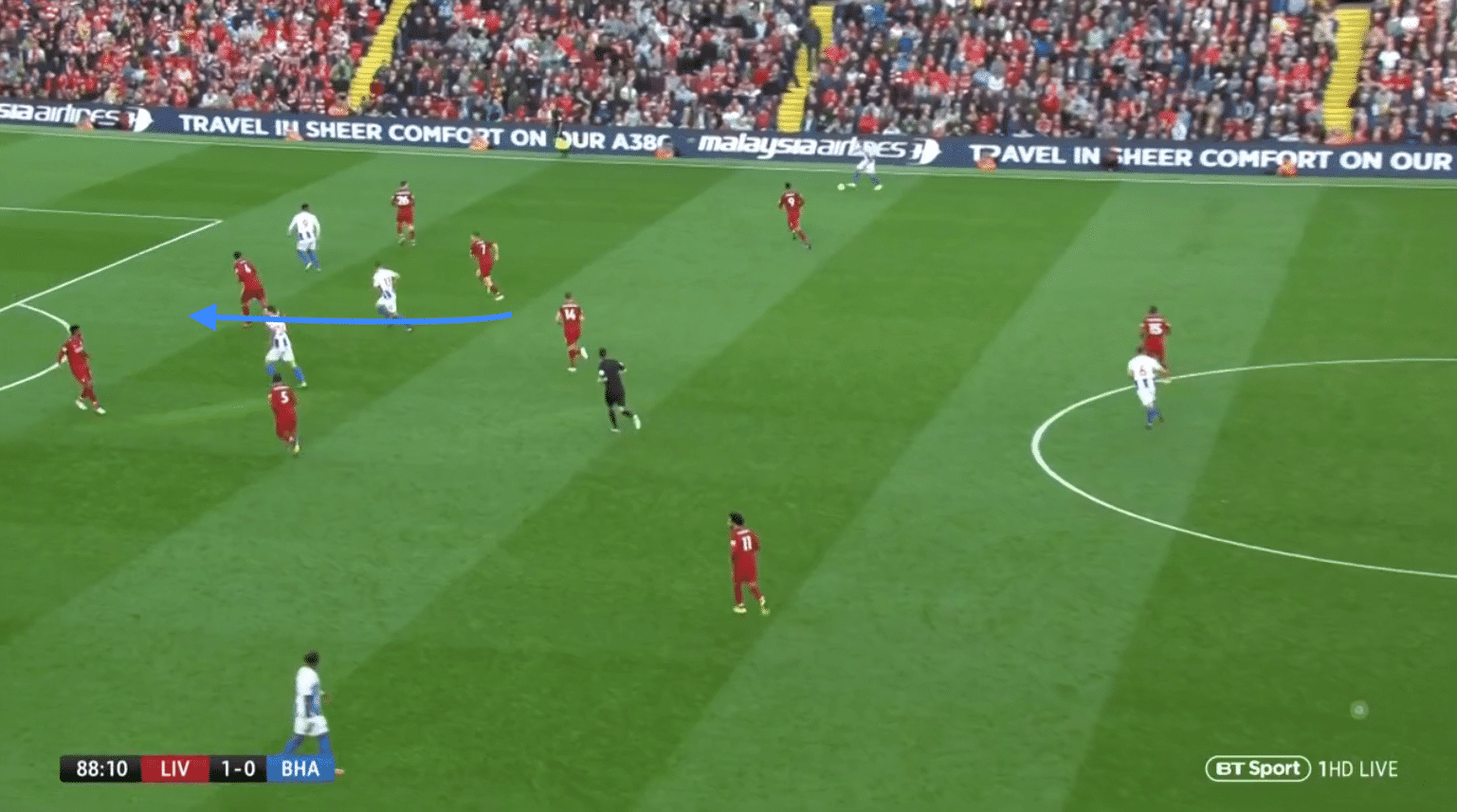 With the ball moving into a crossing position, Groß runs off the back of James Milner towards the box. During his run, he checks his surroundings and sees that Glenn Murray’s presence on the shoulder of Joe Gomez (just off-screen above, visible below) is keeping the England youngster occupied, while Virgil van Dijk was leaving space behind him, between the two defenders. 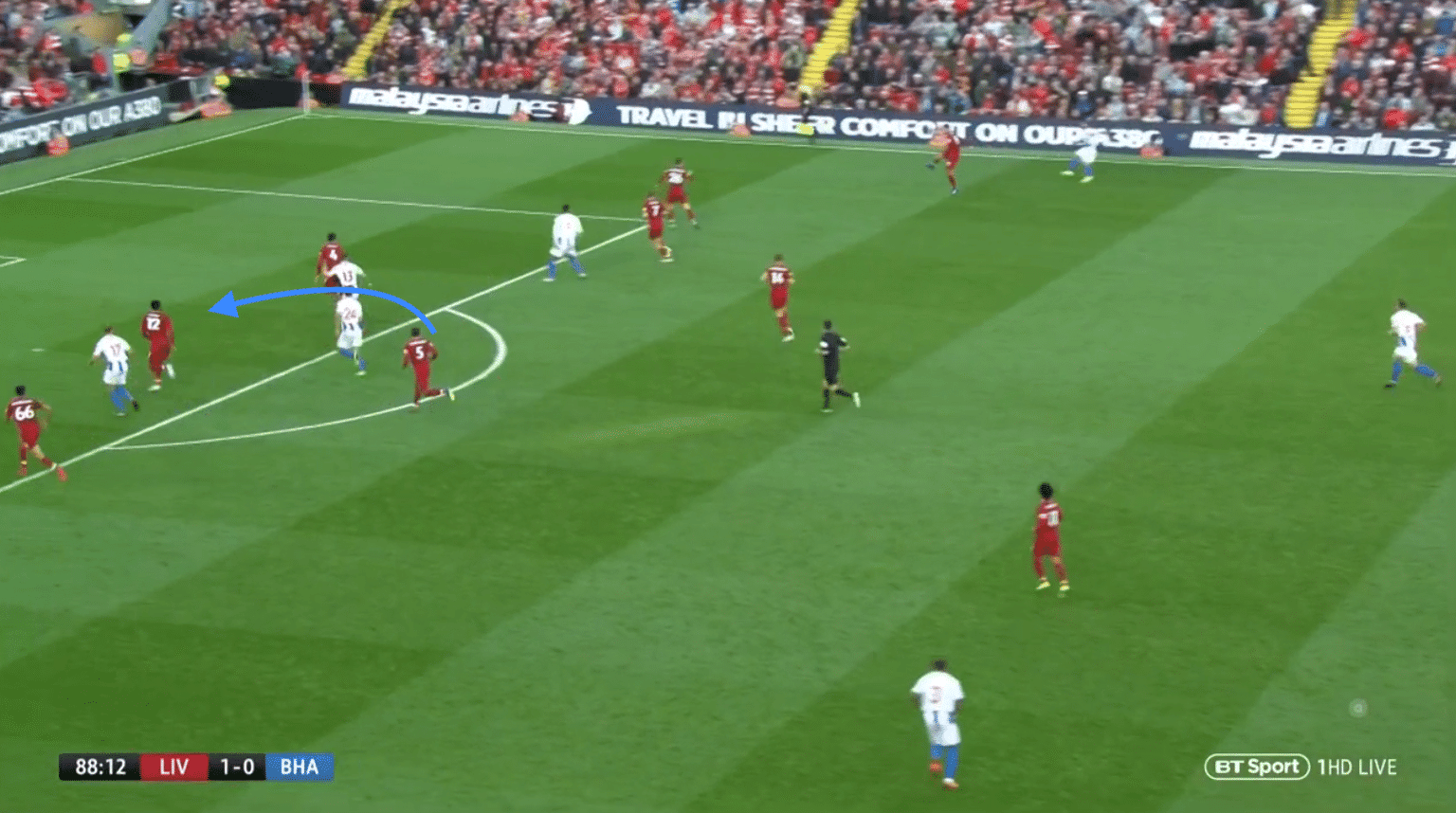 At the right moment, Groß cuts inside, into this space, leaving no time for Van Dijk to react. The cross is slightly awkward for the German to deal with, but he still gets a free header, which Alisson saves.

The case for no

Groß is sluggish, and there’s no getting around it. A significant section of Brighton fans will have raised an eyebrow when they heard the rumour that a pressing manager like Klopp was interested.

His experience with Ingolstadt shows that he’s not a statue, but the stakes are incredibly high at Liverpool right now. Perhaps Klopp would be able to gee him up a little, but mobility is still a big question mark.

The main one, though, is whether Brighton would sell him for £15m. At that price, you could imagine that Groß could just be a rotation option, a pretty cheap option to give the squad some depth during their title challenge.

At what price to Brighton accept, and at what do Liverpool balk? Although the Seagulls only brought him in for £3m, it’s safe to say that Brighton fans wouldn’t be content with only getting £15m for him, with no replacement in sight on their end.

It's this ‘cheap rotation option' scenario which seems the most realistic. Perhaps the Liverpool hierarchy, seeing that the club are serious contenders for the league, have decided to green-light some purchases aimed at adding depth.

It would be hard to imagine Groß – a 27-year-old who has never been a regular for a team bigger than Brighton – becoming a starter at Liverpool.

The German would be a really good depth option, though, and would represent an intriguing cut-price deal not too dissimilar to Xherdan Shaqiri. If the club really are interested, then it will be because they've identified Groß as someone who can slot into their set-up right away.

Whether they'll be able to pry him away from Brighton for a price that's worth it, though, is another matter entirely.