Perhaps the fiercest Eastern European derby stems from Serbia's capital Belgrade and its two biggest sports clubs – Red Star and Partizan. In order to bet successfully on this tricky fixture, we advise you to check out our intel.

We've made it relatively easy for all fans of gist reading through compiling our picks in a single place. However, in case you are interested in the write-up behind these predictions, make sure to continue reading!

The odds are subject to change at any time, so remember to proceed with caution when placing a bet! 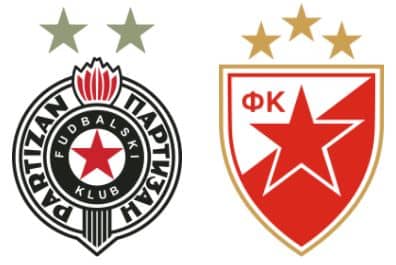 Serbia’s finest next fixture will take place 07.04.2021 when Red Star will host Partizan at the Rajko Mitić Stadium. The match will be their second league meeting in the 2020/2021 season and will come at a time of significant importance – nearing the end of the season. Given that the two sides dominate the Serbian SuperLiga in this derby, this fixture's outcome may as well decide the winner of the current campaign.

Historically, Red Star is the team with the most triumphs in the Serbia top-flight, but they lead Partizan by a slim margin that they've accumulated just recently. The first half of the 2010s saw Partizan as the frequent reigning champions, but since 2015, the tables have turned. With three league titles in the last four editions of the SuperLiga, Red Star are in charge. Their current form seems to be better overall, and the 2020/2021 campaign is no different.

So far, Red Star Are unbeaten in 19 league games, winning 17 of them and conceding just seven goals in the process. If that isn't a sign of complete dominance, then what is? Partizan Belgrade, on the other hand, is keeping the pressure on with consistent performances. They've won 14 and lost 3 of their first 19 games and have a goal difference of 42:12. Partizan's problem is that they've drawn in their first league meeting with Red Star, making the three losses accumulated a very bitter mistake. These are points that Red Star has capitalized on, endlessly complicating the league run of their opponents.

In order to have any hopes at all, Partizan must remain on their A-game, getting nothing but 3 points and winning in the upcoming Eternal derby clash. Even then, they will need more to catch up – Red Star underperforming in a couple of games. The Red-Whites will be the most vulnerable between 17.02 and 27.02, a period marking their Europa League Round of 16 participation. In the span of 10 days, Red Star will have to play five games, and that's when fatigue will settle. On top of that, two of their fixtures are against AC Milan, which complicates coach Dejan Stanković's position. Here the Serbian leader will have to evaluate their priorities. Of course, the possibility of Partizan dropping too many points to endanger their opponents' position is always on, so all of a sudden, the situation may not seem as troubling.

Red Star comes in this game as the clear favorites, rarely there will be a second guess to this statement. One of our free tips – winning the match may not come as a surprise, but in what other ways can you capitalize on this matchup. To explain, we will first reintroduce the betting tips.

The last five games between these two rivals have actually resulted in more wins for Partizan. Despite this fact, undoubtedly, Red Star is in better form, after an impressive Europa League group stage performance, and the fact that they've gone unbeaten for over half a season now. Just seven goals conceded is the most telling stat. We predict Red Star winning the derby even by the slightest margin.

This is a bet in which everything can go wrong all of a sudden. However, it seems quite suitable for precisely this match, which in general won't be goals galore. In the last five games, this pick has failed just once. We believe that Red Star’s defense will carry out this pick, and we are confident in that.

Serbian football is quite physical, and teams are quite familiar with red and yellow cards. When it comes to one of the fiercest derbies, in which fan altercations aren't out of the usual, often the aggression can also be sensed between the two line-ups. The Eternal derby produces tons of bookings, and 5.5 cards will likely be almost covered even by half-time. For reference, the last time these two met, the referee showed 11 yellow cards and even sent-off a Red Star player at stoppage time.