While certain players shy away from the spotlight, others are drawn to it in the knowledge it presents an opportunity to climb to the very top.

These players are showmen, entertainers. And this week Paris Saint-Germain added another star attraction to their billing in Mauro Icardi.

The Argentine now has the platform he’s always craved. Lining up beside two of European football's best – Kylian Mbappé and Neymar, the world’s most expensive players – Icardi finds himself in an enviable position.

However, the balance between devastating and destructive is a fine one, and the former Inter captain is going to have to tread carefully.

The move isn’t a risky one for the Parisians, there’s no obligation for them to buy the striker at the end of the loan deal. But get this move wrong and Icardi might not have an opportunity to play for one of Europe’s top clubs again.

Controversy tends to follow Icardi and given the fractious relationship Neymar has with Edinson Cavani, many believe the Uruguayan’s potential successor will face similar problems with the Brazilian megastar.

Neymar has shown he isn’t prepared to make any sacrifices to his game to cater to others, not when he believes he’s the best player at the club. Icardi is a quality striker but he’s not Lionel Messi. If he’s going to thrive at the Parc des Princes he’s going to have to adapt.

With Cavani struggling with injuries and his future uncertain, this season is an audition for Icardi to become PSG’s long-term No.9, If he’s going to make the most of this chance he’s going to have to go from somewhat selfish to selfless. 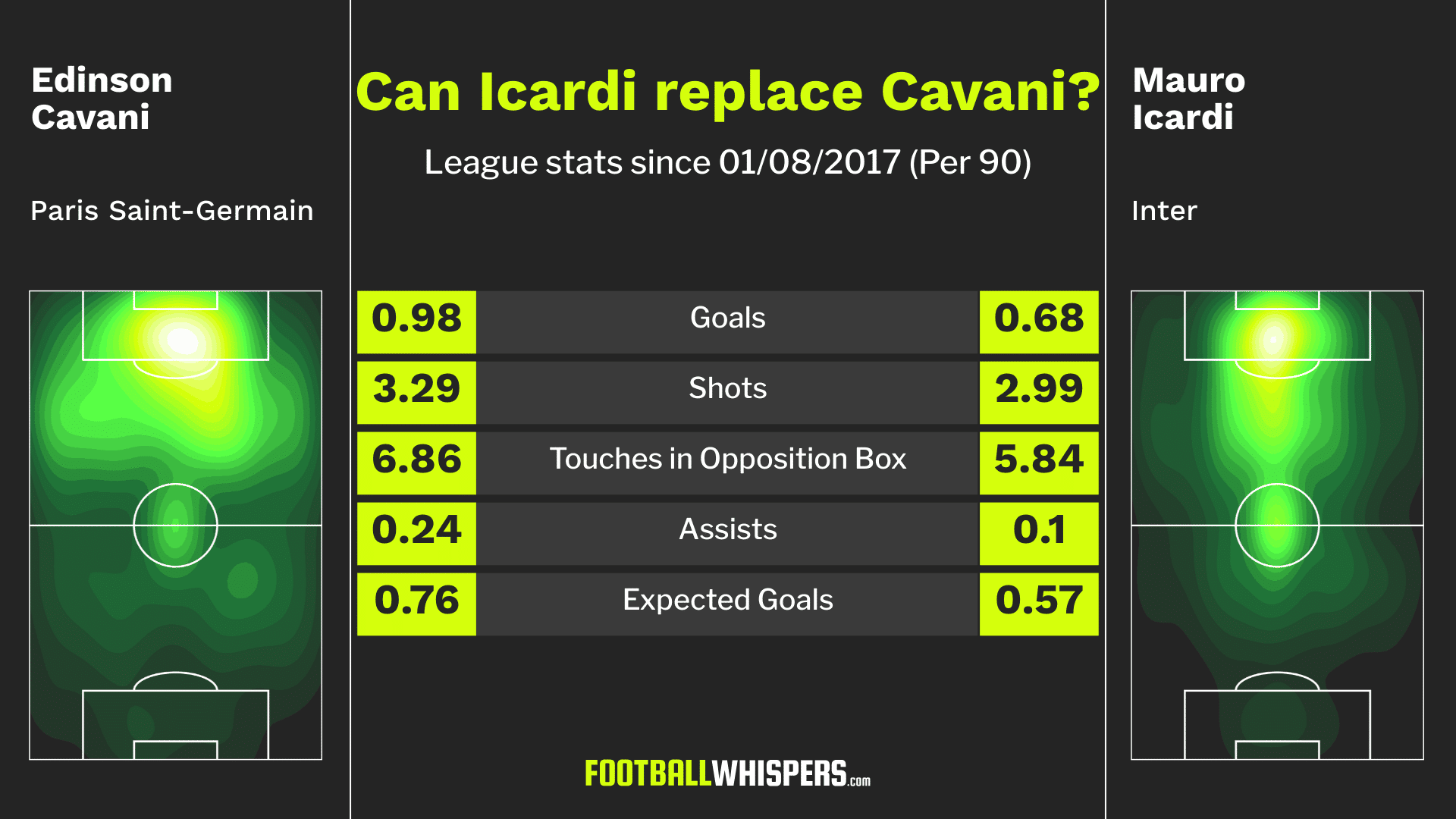 The heatmaps shown in the above graphic might not be drastically different but what they do highlight is that Icardi takes the majority of his touches in central areas of the pitch. He isn't one to run the channels. He isn't going to stretch play horizontally and create space for others the way Cavani does.

In Ligue 1, it may not be an issue with PSG dominant the majority of the time. Thomas Tuchel will be able to plot a way to get the best out of Icardi while not seeing Neymar or Mbappé suffer.

Any issues that may arise will do so in the Champions League when games become less about the individual quality and more about tactics.

Icardi may replace Cavani's goals and presence in the final third but there are no guarantees the Argentina international can replicate what the former Napoli star offers off the ball.

Since the start of the 2016/17 campaign, Cavani has averaged 0.99 possession regains in the final third, 0.78 in the middle third and 0.68 in the defensive third per 90. In each of the three categories, the Uruguyan comes out on top.

That isn't to say Icardi can't replicate that output – he wasn't tasked with doing so with Inter – but instructing a pure goalscorer to get their hands dirty might not work out.

Furthermore, PSG tend to carry passengers defensively when it comes to high-profile European clashes. Adding another in Icardi isn't going to help the balance of the team.

It's why the move has the potential to be a disaster. Unless Icardi buys into the project and Tuchel's ideas, PSG are going to have a forward desperate to score goals, not a bad thing of course, but one who operates in the same areas Mbappé and Neymar like to fill.

All the best offensive trios have that one player who will create space for the other two. Without it, it just won't work. Liverpool have Roberto Firmino. Barcelona have Luis Suárez and have now signed Antoine Griezmann. PSG had Cavani.

Icardi is used to taking centre stage but he might have to accept a supporting role if he's to have a career with the Ligue 1 giants.