Chelsea boss Maurizio Sarri does not like the transfer market. He once described it as “the refuge for the weak”; something coaches who are unable to solve problems on the training pitch turn to as a cure-all solution.

Yet after Cesc Fábregas left Stamford Bridge to join Monaco and Jorginho struggled in the win against Newcastle United, the Italian admitted he needed reinforcements in January.

“As you have seen Jorginho was in trouble but I didn't have a player for that position,” he said. “The club knows very well my opinion. I need a player. It depends on the club decision. I cannot do anything more.”

Chelsea are, according to numerous reports, ready to enter the transfer market to back Sarri. The Blues have been linked with Cagliari midfielder Nicolò Barella but that appears a non-starter, at least this month.

“We do interviews and we issue statements, but evidently we’re not being clear enough: we reiterate Nicolò will stay for at least for the next six months,” Cagliari sporting director Mario Passetti told Rai Sport. “After that, we’ll see what happens.”

So instead the Premier League side have turned their attention to Leandro Paredes, the 24-year-old Argentina international who has spent the last 18 months at Zenit St Petersburg.

The Russian club paid around £22million to sign Paredes from Roma in July 2017; a move which at the time came as a surprise given the midfielder had been linked with the likes of Manchester United, Liverpool, Real Madrid and Juventus.

To bring him to west London, Chelsea will reportedly have to stump up £36million. It's a significant fee, especially given the Blues are in more urgent need of a striker. And there is also the Jorginho conundrum to consider.

The Italian playmaker was signed by Chelsea in the summer for £50million from Napoli to be the Blues' midfield orchestrator. Possession went – and still does – through the Italy international.

But his form has tailed off in recent weeks; the lack of a winter break in the Premier League perhaps affecting the 27-year-old. Jorginho has drawn the ire of a section of the Chelsea support but he is Sarri's guy and will be given time to get back to his best.

Which is why the club's pursuit of Paredes, an undoubted talent, is somewhat curious. The Argentine is also a deep-lying playmaker. A midfielder who collects the ball from defenders and starts attacks.

Of course, Jorginho can't play every game and a capable deputy is always important (Ethan Ampadu, perhaps). Yet a fee of £36million isn't one usually paid for an understudy. And Paredes is too good to be one.

The above are Football Whispers‘ persona radars for both Jorginho and Paredes, and while former's game is dominated by passing – not a surprise given he has played over 2000 passes in the Premier League this season alone – the latter's is more varied.

That will, primarily, be because Sergei Semak's Zenit are not as possession oriented as Sarri's Chelsea. But it's also because Paredes' has a better passing range than Jorginho.

This season in the Russian Premier League, Paredes attempts 11.79 long passes per 90, the highest figure of any midfielder in the division. These are rarely hopeful punts forward, too. They are well executed and accurate, which is why his 55.24 accurate passes per 90 is only bettered by two players.

He is also an expert corner taker and a greater goal threat than Jorginho, as shown in the graphic below. 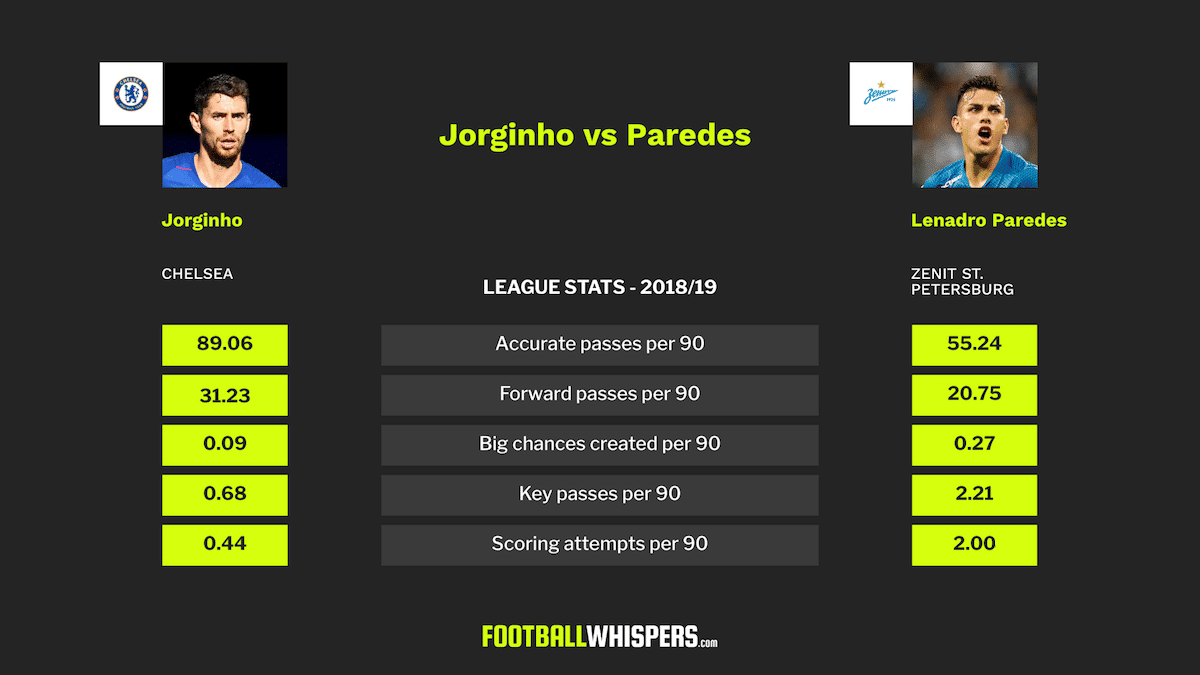 Of course, the quality of opposition Jorginho is facing in the Premier League on a weekly basis is certainly higher than that which Paredes comes up against in Russia. And that must be taken into account.

Paredes also doesn't have the same ability as Chelsea's No.5 – when confident and fully fit – to escape an effective press. On countless occasions, Jorginho, with either a clever turn or sly pass, has opened up the pitch when the Blues are put under pressure in their own defensive third.

With time and space, Paredes can hurt sides. And at Zenit he gets that. Were he to move to Stamford Bridge, however, he'd quickly find opponents are far more energetic and effective when closing down space.

This change in tempo can be difficult to adapt to, it's why Jorginho hasn't produced his best for Chelsea. Paredes would need time and patience, something which he is unlikely to get given he would be parachuted into the side to give Jorginho a break.

The problem arises, however, when Jorginho has rested up. It's highly unlikely Sarri plays both the former Napoli star and Paredes in the same side; they're simply too similar.

So one will then have to take up a place on the substitutes' bench, and that would likely be Paredes.

There is no doubting the Argentine's quality, nor the fact Chelsea would be stronger with him in their squad. Yet he could become a £36million problem in the long run and, with other areas in need of investment, the Blues would be wise to have a rethink.