“Take a bow son. Take. A. Bow.” In the kind of understatement that somehow eludes many co-commentators, Sky Sports' Andy Gray got this one pitch-perfect.

After scrappy play from both teams, West Ham’s Marc-Vivien Foé played a cross-field ball to Trevor Sinclair on the right wing; the latter taking a touch before firing a long pass of his own into the box.

Wimbledon's Kenny Cunningham misjudged the flight of the deep cross completely, but Paolo Di Canio – lurking behind Cunningham – did not.

He was already in the air but shifted his feet and somehow launched a stunningly powerful volley beyond goalkeeper Neil Sullivan and into the net. The Italian had scored what is, arguably, the finest strike in Premier League history – and one of Upton Park's most memorable moments.

The skill, imagination and audacity involved are all immeasurable. A goal that most players could even conceive, let alone execute, is often just a footnote in the story of the man who scored it. Instead, Italian firecracker Di Canio is far more readily remembered for his politics, his poor managerial record and for pushing a referee to the floor.

Indeed, the same bemused, incredulous laughter that swept through the Boleyn after Di Canio had smashed home his iconic goal against Wimbledon on March 26 2000 resembled that which had greeted ref Paul Alcock's comical fall two years earlier at Hillsborough.

Having been shown a red card while playing for Arsenal back in 1998, Di Canio shoved Alcock in the chest, the surprised match official tumbling to the ground in a bizarre stumble more akin to a cartoon strip than a football pitch.

The Italian would be handed an 11-match ban, fined heavily and essentially be ostracised by his own club, only to re-emerge as a far more influential player at West Ham.

Just two years after that incident, the striker would win a FIFA Fair Play award for catching the ball rather than scoring against Everton with an open net at his mercy, allowing injured opposition goalkeeper Paul Gerrard to receive immediate treatment.

That is the contradictory nature of both the man and his career, that is quintessential Paolo Di Canio.

Growing up in the Quarticciolo area of Rome, the young Di Canio was surrounded by AS Roma fans both in the neighbourhood and at home. His three older brothers – faced with a sibling who was overweight, wore orthopaedic shoes and, according to his self-titled autobiography, wet the bed until he was 10 years old – bullied him relentlessly. 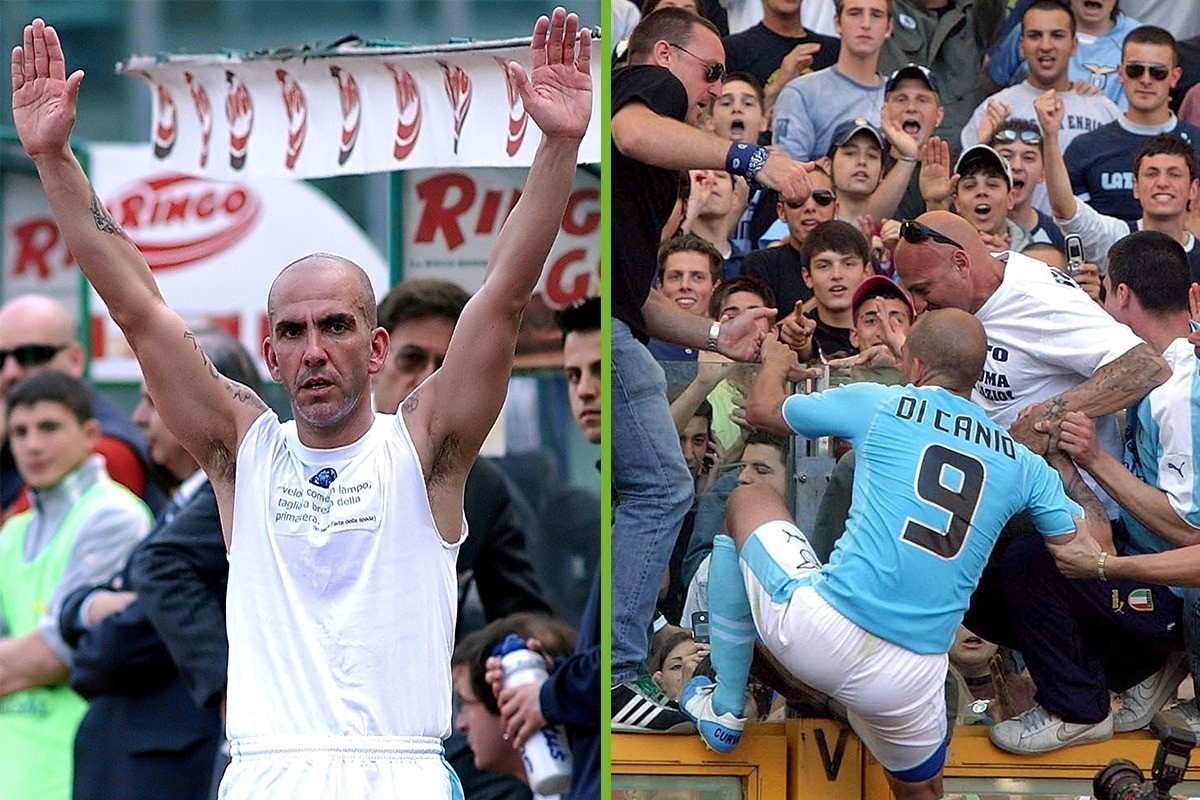 Perhaps then it was no surprise that, feeling like an outsider, he gradually changed from being simply a passionate Lazio supporter into a fully fledged Ultra. Working hard to overcome not just the physical abuse but also terrible eating habits, a teenage Di Canio travelled to away matches with the Irriducibili.

Among the most hardcore of such groups across the peninsula, he never truly severed his ties with them despite joining the club as a player when he was 16 and subsequently making his first team debut two years later.

The 1989/90 campaign would see him go from cheering in the stands to hearing his name sung around the stadium, scoring the winner in the Rome derby and becoming a hero to the same supporters he used to congregate with.

The following summer he was sold to Juventus but never truly settled, constantly arguing with coach Giovanni Trapattoni, who quickly grew weary of the temperamental striker.

He would play well enough in a season with Gianluigi Lentini, making it almost impossible for Di Canio to find any meaningful playing time.

Like Trapattoni before him, Rossoneri boss Capello soon wanted the trouble-maker removed from his dressing room and that would see a surprising move in 1996 to Celtic for just £1.5 million. It would prove to be an absolute bargain for the Bhoys as the Italian took to life in Britain instantly.

Rivals Rangers had claimed nine of the previous ten league Scottish titles but with Di Canio featuring alongside Portuguese goalscorer Jorge Cadete and Pierre van Hooijdonk, the ‘three amigos’ would look to lift the Hoops above their neighbours.

The trio did their best but ultimately fell short, yet Di Canio – having bagged fifteen goals – was voted Scottish PFA Player of the Year. However, he could not agree terms on a new contract and eventually forced yet another move, this time to south of the border to Sheffield Wednesday.

The 1997/98 season saw him register twelve goals in 35 Premier League appearances. However, just six games (and three more goals) into the following campaign, that fateful game with Arsenal saw the Alcock controversy, and resulting lengthy ban, end his time at Hillsborough.

Free to choose his next club, Di Canio would join Harry Redknapp and West Ham in 1999, finding the sense of belonging he had lost since leaving Lazio. Building a trust and understanding with the manager that no other coach had come close to replicating, a calmer, but still fiery, striker emerged.

His professionalism rubbed off on young players at the club and moments like the volley against Wimbledon or his display of sportsmanship at Everton came to characterise this phase of his career. 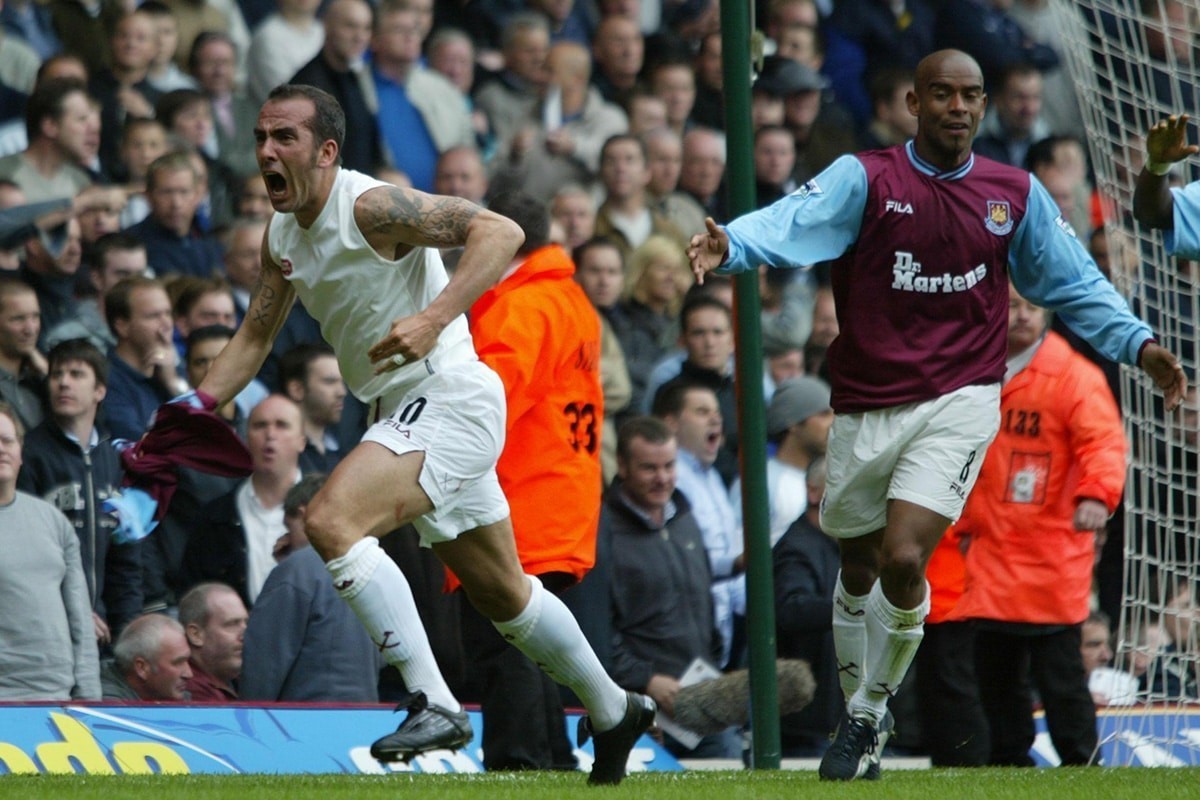 After five years as an Charlton Athletic, he jumped at the chance to re-join Lazio at the age of 36 and took a pay cut in the region of 75% to help facilitate the return home. His passion for the club was palpable immediately and repeatedly. Di Canio almost came to blows with team-mate Simone Inzaghi over who would take a penalty, before duly despatching the spot-kick to mark the first goal of his second spell at the club.

Another winner in the derby with Roma saw him mock Giallorossi captain Francesco Totti, while his emotional outbursts on the field were magnified by the vociferous Irriducibili in the Stadio Olimpico's famous Curva Nord. In order to repay their support, Di Canio took to saluting them by raising his right arm palm-downwards to the fans of his team. Given Lazio’s constant association with fascism and the fact the player has the word Dux – the Latin version of Benito Mussolini’s ‘Duce' moniker – tattooed on his arm, this raised serious questions in Italy and abroad.

“What a delightful Roman salute!” Il Duce's granddaughter Alessandra Mussolini remarked after Di Canio’s first use of the gesture. “I was deeply moved and must write him a thank you note.” The Italian FA did not see it that way, fining him around £7,000 and handing the Lazio veteran a one-game ban, following which he promptly defended his actions in an interview with the news agency Ansa:

“I'm a fascist, not a racist. I give the straight arm salute because it is a salute from a ‘camerata' to ‘camerati',” he said, using the words for members of Mussolini's fascist movement. “The salute is aimed at my people. With the straight arm I don't want to incite violence and certainly not racial hatred.”

Widely condemned for his actions, none other than Silvio Berlusconi – who was Prime Minister of the country at that time and notorious for his own dubious judgement – spoke out in support. “He’s an exhibitionist but a good lad,” the Milan owner said to La Gazetta dello Sport, adding that the salute ‘did not have any significance'.

Ultimately, his age and poor form would end his time with Lazio and he would move down the leagues to tiny Cisco Roma, a switch which allowed him to remain in the capital. The club were playing in Serie C2 – the fourth tier of Italian football – and he was given a role as player/coach for two seasons.

Eventually that move to the dugout became permanent and his love of English football brought him to League Two’s Swindon Town, winning the division in his first season. He would continue in the same manner as he had done on the field, rarely calm and often delivering wild emotional outbursts.

Six rollercoaster months as Sunderland boss followed, which began with a spat with the Durham Miners' Association who took exception to his appointment over his ‘fascist' views'; a 3-0 Tyne-Wear derby victory at St James' Park in his second game in charge; and, ultimately, a dramatic ‘great escape' from relegation at the end of the 2012/13 season.

But it is not in a shirt and tie that he will be remembered, it will be for that knowing nod as he was mobbed by his West Ham team-mates following that stunning goal against Wimbledon or for screaming at his fellow Lazio supporters as he saluted them one last time.

Paolo Di Canio was one of a kind, and even now the thought of watching him play cannot help but make you smile in the hope of seeing him produce one more moment of magic.