Fulham's Premier League return did not go according to the script. Buoyed by a hugely impressive summer's business in the transfer window, with more than £100million spent on 12 players, the Whites were expected to mark the first top-flight fixture at Craven Cottage in four years with a bang.

But former Fulham boss Roy Hodgson didn't feel like playing his part in the sentimental narrative as his Crystal Palace side triumphed in the London derby.

But Hodgson, whose managerial powers of recovery lifted Palace to 11th last season having failed to pick up a single point during de Boer's four games in charge, was not to follow his predecessor in being undone by a promoted side.

Instead, goals in either half from Jeffrey Schlupp and Wilfried Zaha gave Fulham a sobering reality check and secured three well-earned points for the Eagles.

And there was a lot to like about this Palace team. Luka Milivojević impressed in midfield, Wayne Hennessey produced a string of top saves to keep a clean sheet and Zaha, partnering Christian Benteke in attack as Schlupp and Andros Towsend took up the two spots on the flanks, was involved throughout before getting his goal in the 79th minute.

What really stood out, however, was the influence of Palace's flying full-backs, Patrick van Aanholt and Aaron Wan-Bissaka.

Both players notched an assist. Van Aanholt prodded an incisive pass into Schlupp's path for the opener before Wan-Bissaka helped put Fulham's challenge to bed; riding a challenge and ghosting past another before slipping a perfectly-weighted ball in behind the home side's defence for Zaha to finish.

This Palace team has plenty of pace. The likes of Zaha, Townsend and Schlupp possess a considerable threat on the counter-attack, but having the acceleration and enterprise of two marauding full-backs provides even more of an edge (as Fulham found out).

At Craven Cottage, van Aanholt and Wan-Bissaka completed six of seven attempted dribbles between them, offering an illustration of their forward-thinking momentum from full-back. It's a devastating combination and a radical departure from the days when Palace had Damien Delaney and Joel Ward as their starting full-backs.

Palace have been through their fair share of full-backs in recent years, including Pape Souaré and last season's loanee Timothy Fosu-Mensah (incidentally now on loan at Fulham). But in van Aanholt and Wan-Bissaka Hodgson seems to have found two on which he can rely.

Van Aanholt's abilities are well-established on this stage. Now 27, Palace are his seventh club in English football including loan spells. Having stood out among a poor Sunderland team during the first half of the 2016/17 season, the Netherlands international rejoined his former Black Cats boss Sam Allardyce at Selhurst Park.

Last season, van Aanholt netted five times in the league, with only Chelsea's Marcos Alonso (7) scoring more among defenders. In fact, Alonso (with 13) is the only defender to have more than van Aanholt (10) since the start of the 2016/17 campaign.

Van Aanholt possesses a significant threat in the attacking third. His xG of 2.77 last season was third among Premier League full-backs – again behind Alonso as well as Victor Moses, Chelsea's other wing-back – while his post-shot xG of 3.26 also placed him third. 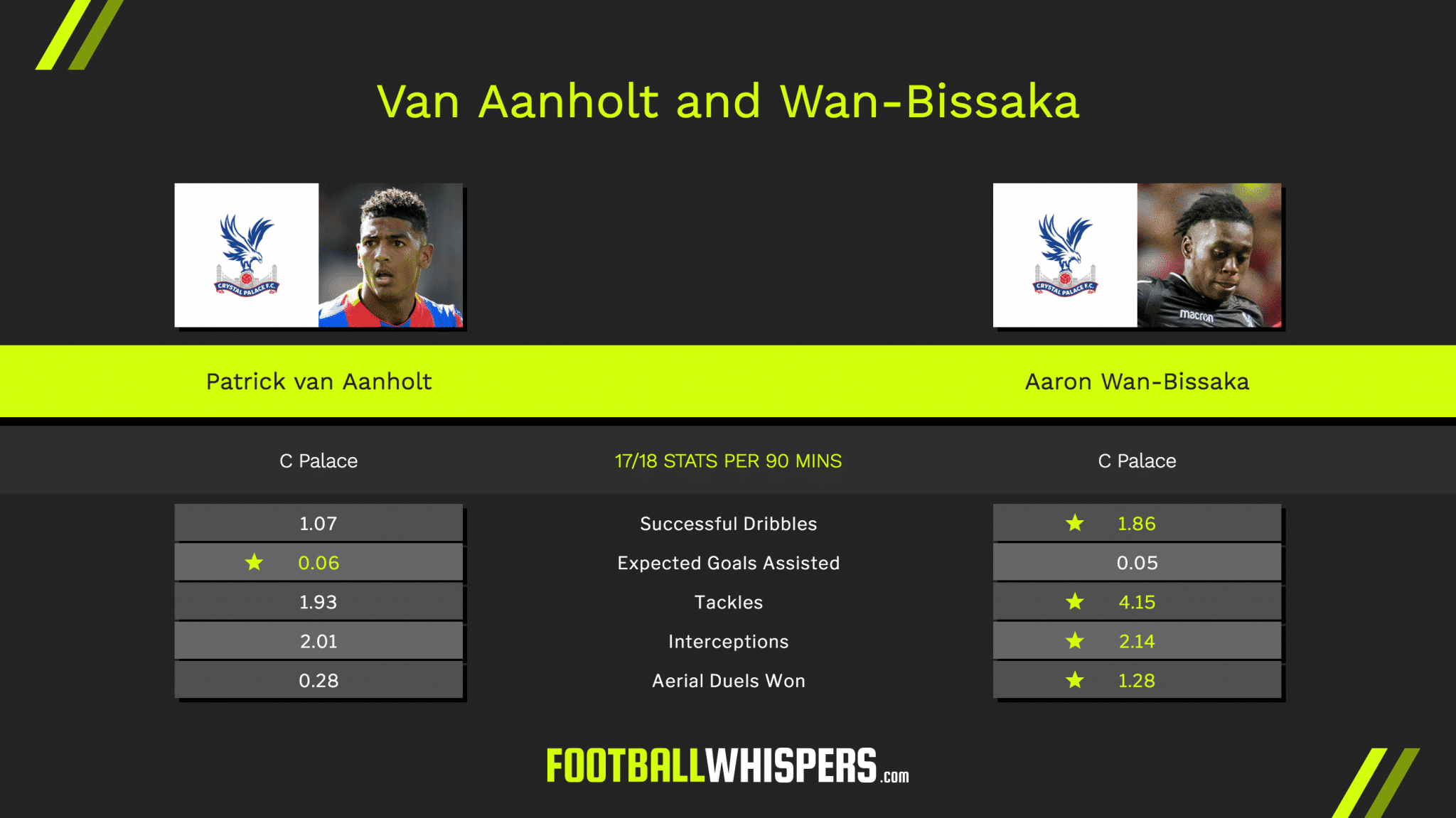 His statistics are made more impressive by context. Chelsea are one of the division's most potent attacking sides while Palace spent a considerable portion of last season hauling themselves out clear of relegation.

Now, having established a cohesion and consistency under Hodgson, they have a realistic chance of emulating last year's over-achievers Burnley in qualifying for Europe.

Van Aanholt's burgeoning understanding with Schlupp on the left will doubtless be a feature for Palace this season, but there is understandably growing excitement over Wan-Bissaka.

The 20-year-old only made his senior debut in February's defeat to Tottenham Hotspur – becoming the first academy player to make a full league debut in 2,148 days in the process – but has wasted no time in making the right-back spot his own.

A series of eye-catching performances in the closing weeks last season cemented his place in the first-team and, following another strong display against Fulham, the future looks bleak if your name is Ward.

Wan-Bissaka has earned his place – there's been no preferential treatment on the basis of his homegrown status. In his seven appearances last season, he averaged 4.15 tackles and 1.86 successful take-ons, earning the Croydon-born defender an England Under-20 call-up.

Wan-Bissaka has also given us one of the better terrace chants to emerge in recent times; “Their wingers don’t like him Wan-Bissaka, Wan-Bissaka” to the tune of The Clash's Rock the Casbah from their 1982 album, Combat Rock.

The Clash only made one album after Combat Rock but one feels Wan-Bissaka will be a hit for Palace for many more years to come.