There is an unwritten adage often heard within heated conversations before Leeds United games that start in pubs and spill over onto the public transport systems of West Yorkshire: “If Pablo plays well then Leeds will play well.”

This should come as no surprise. Pablo Hernández won the club’s Player of the Year award for the 2017/18 season and is well on course to repeat the feat again this year – although Kalvin Phillips is doing his best to make the vote competitive.

That he should retain his status as one of Leeds' most creative players is remarkable on a number of levels, though. For one, he is not getting any younger. Hernández turned 34 last week, an age at which most players are thinking of hanging up their boots rather than functioning as one of the more productive players in a Premier League-hungry team’s promotion bid.

Then there is Marcelo Bielsa, who has taken a team who finished thirteenth last term and got them playing some of the most attractive football that the Championship has seen this season with a minimum of investment. Even with this uptick in player performances, Hernández has remained the central cog in the Leeds machine.

There are mitigating factors. The Valencia academy product has spent the last two campaigns playing in broadly the same role within the Leeds midfield – the right-sided player in an attacking three – despite having worked under three different managers in that time.

That said, there is a world of difference between the 4-2-3-1 of Paul Heckingbottom and the 4-1-4-1 that becomes a 3-3-1-3 in possession that Bielsa prefers. If you compare the Spaniard’s Player Personas between the last two seasons, it is clear that his function has become markedly changed under Bielsa.

When it comes to chance creation, it may look as though Hernández is creating fewer chances than he was last term. However, the Player Persona radar shows up each metric as a percentage of total output. In fact, there is no difference between Hernández's big chance creation this season versus last season: 0.45 big chances created per 90 minutes.

Looking back over the last two years, it becomes clear much more of Hernández's output this season has been given over to build-up play. This reflects the tactical shift that has taken place since Bielsa took over at the club. In a system which sees full-backs advance and the wide players drop deep to help play out from the back, it is only natural that Hernández would see a shift in his production.

Much of Bielsa’s attacking approach relies on the principle of overloading to isolate. Simply put, this means Leeds will attempt to advance the ball through quick passing in wide areas, committing players to those areas in order to create space on the far flank that they can then exploit by crossing from wide areas.

This season, Hernández is at 1.66 crosses completed per 90 minutes compared to last season’s 1.48, a statistic that is reflected by a comparison of his Player Personas from the last two seasons. 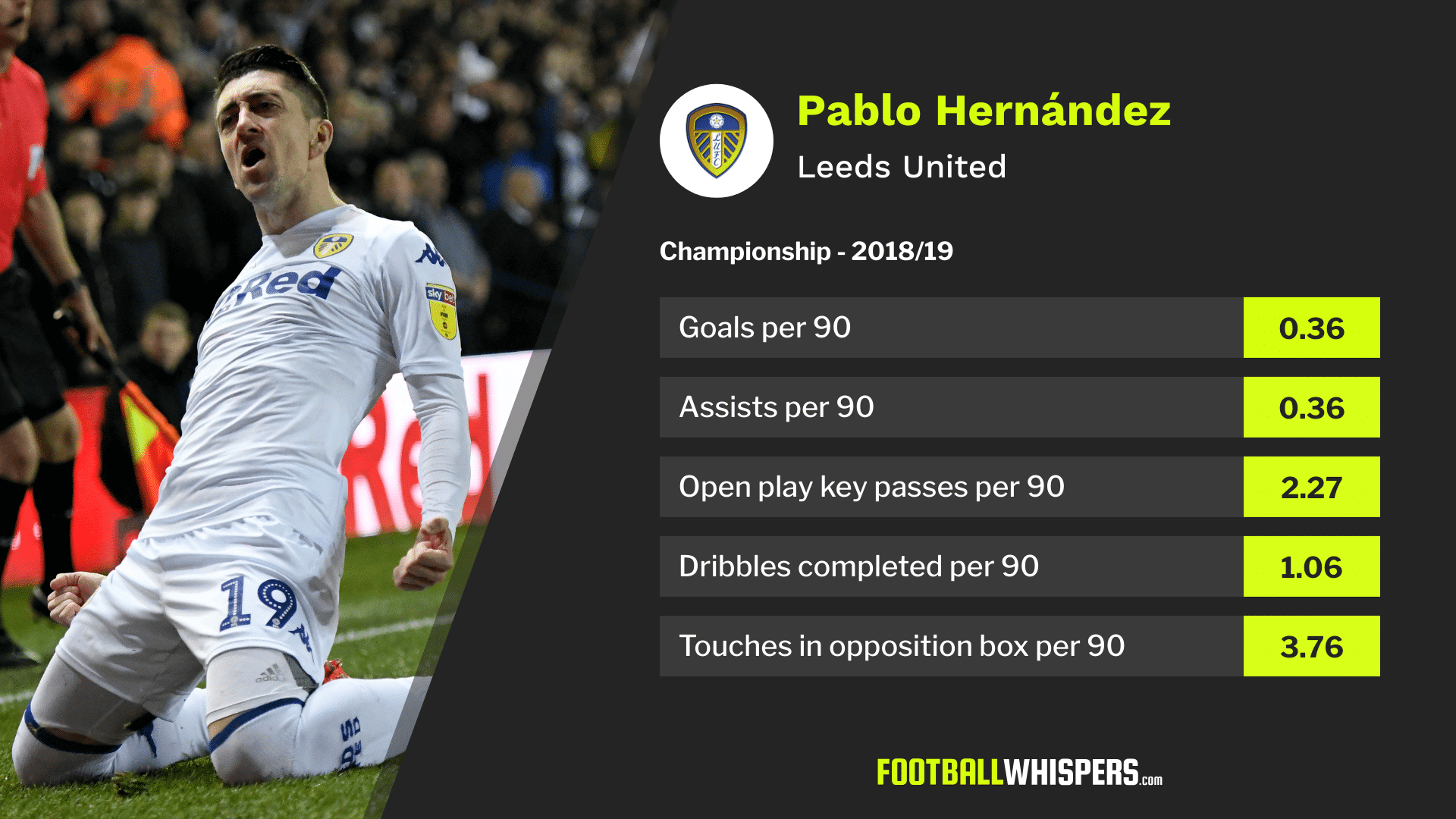 In fact, Hernández offers a perfect example of how it is that a tactical system can result in a group of players producing better results.

Last season, Hernández was the most creative player on a team who struggled to create big chances. This season, Leeds United’s big-chance production per 90 minutes has increased by 42.7 per cent. Hernández is still one of the most creative players on the side. The difference is that his creativity appears in a way that is much more team-focused than it was last season.

In a season in which players across the Leeds United squad have seen improved performances, it is hardly surprising that Hernández has gone under the radar a little. He does, however, remain one of the most important Leeds United players from a creative perspective. This time though, he has done it as the beating heart of the team rather than as an isolated maestro.