West Ham United are set for another squad revamp. At the end of May, the club released a statement confirming the exits of 13 players, with Andy Carroll, Adrián and Samir Nasri among those set to be on the hunt for new employers.

Carroll, a match-winning striker on his day, departs after six years. Adrián was the club's first-choice goalkeeper for a period, while Nasri, whose career at the London Stadium never really took off, is still a two-time Premier League champion.

But now is no time for sentimentality. After an up-and-down first season under Manuel Pellegrini – tenth in the league, out in the fourth round of both cups – the Hammers are prepared to pump more money into the squad in their search for European football.

Now, their quest to find the next Dimitri Payet – someone to capture the imagination of the club's supporters – has reportedly taken them to Spain.

As per Marca, the east Londoners have tabled a £24million bid for Villarreal's Pablo Fornals, a player known for spectacular goals, flamboyant skills and dodgy facial hair.

The 23-year-old Spaniard, who has previously been linked with Arsenal, has impressed during his two years with The Yellow Submarine after joining from Málaga in 2017 – it's worth noting that Husillos has strong links to the Andalusians.

A two-time Spain international, Fornals attracted interest from the Premier League in January but remained in Castellón to help Villarreal avoid relegation from La Liga. 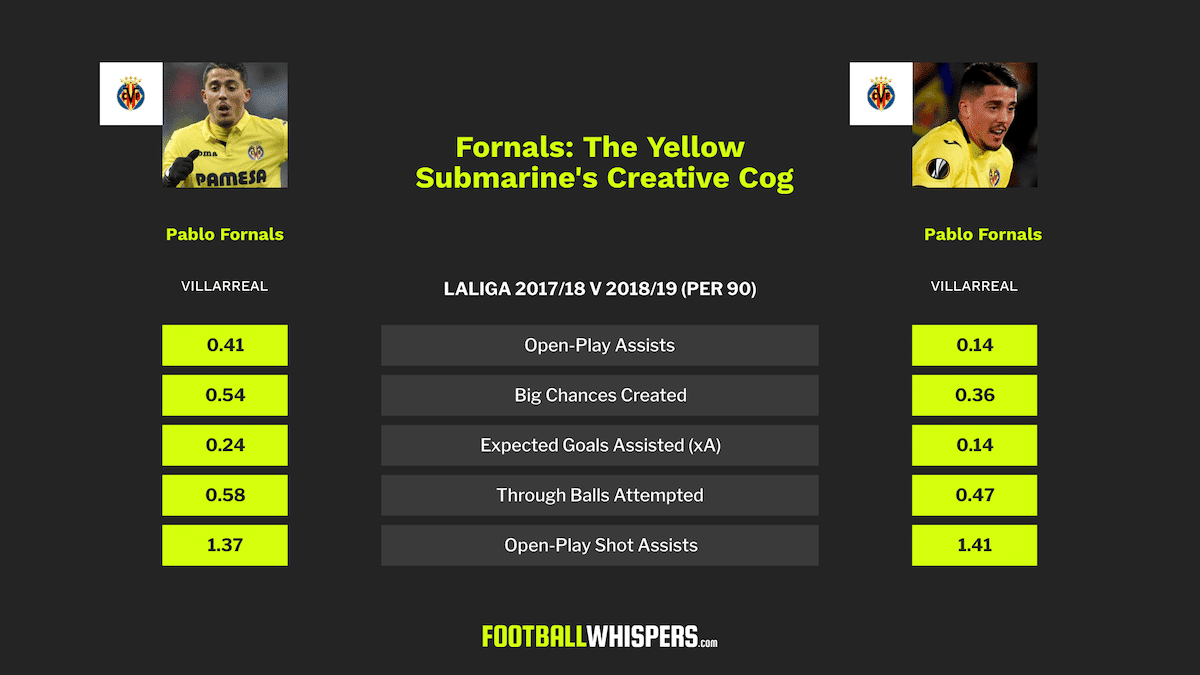 However, despite retaining their top-flight status, a sizeable wage bill means the club may be forced to wave goodbye to some of their most promising talents this summer.

Samuel Chukwueze has attracted interest from across Europe, including from the Premier League. Carlos Bacca may leave. And Gerard Moreno has been mentioned among Atlético Madrid rumours.

Fornals could fall into the same category and West Ham would be foolish not to try and close a deal for the playmaker.

With Nasri's departure and Manuel Lanzini's persistent injury woes (as per Transfermarkt, the Argentine has missed 64 games in his four years at the club), Pellegrini lacks a dependable creative presence through the middle.

Step forward, Fornals. Despite Villarreal's struggles in 2018/19, their No.8 produced enough moments of ingenuity to steer them away from Spain's second-tier.

His assist for Santi Cazorla earned a crucial point at home to Real Madrid before he teed up Chukwueze's winner at Girona. He also scored in the home draw with Huesca and lit up social media with a spectacular, viral-worthy display against Athletic Club in September.

His looping volley came from a different postcode while he made a fool out of Iñigo Martínez with a dazzling piece of trickery to elude the defender on the byline.

He should not be judged on his show-stopping display in San Mamés, though, nor should he be on the recently completed season.

In 2017/18, he managed more open-play assists than Lionel Messi (12 to the Barcelona forward's nine) and created 16 big chances for his teammates, more than any other LaLiga midfielder.

Fornals ranked first in expected goals assisted (7.18) and second in through balls completed (eight), offering an insight into his considerable playmaking prowess.

He is not blessed with blistering pace or an impressive physique, but he is clever, often drifting into space between the lines and making angles for passes. He has most often been deployed centrally as the team's creative link between the deep-lying midfielders – Cazorla, Manu Trigueros or Vicente Iborra – and main striker, Moreno.

As you can see from his open-play shot assist maps below, the area immediately in front of the opposition penalty area is where Fornals makes his money, but he has the ability to drift towards the flanks and pick out teammates in the box from wide areas. 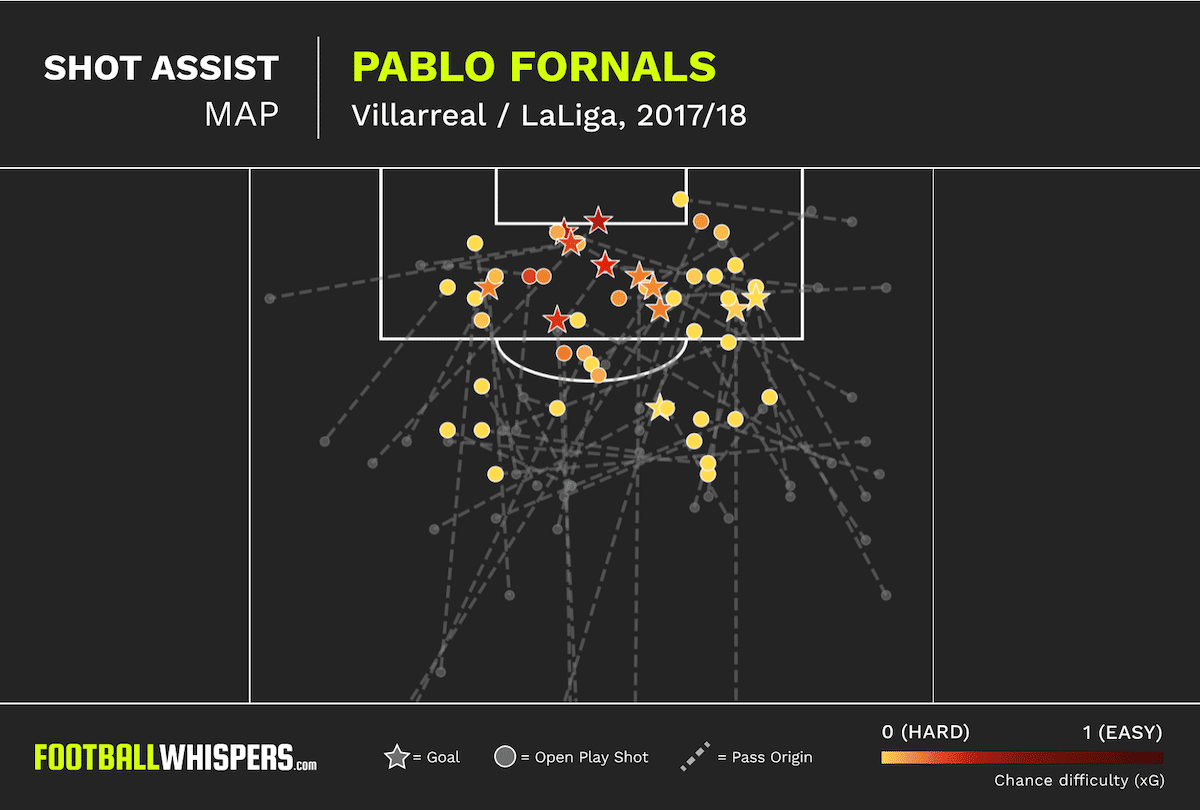 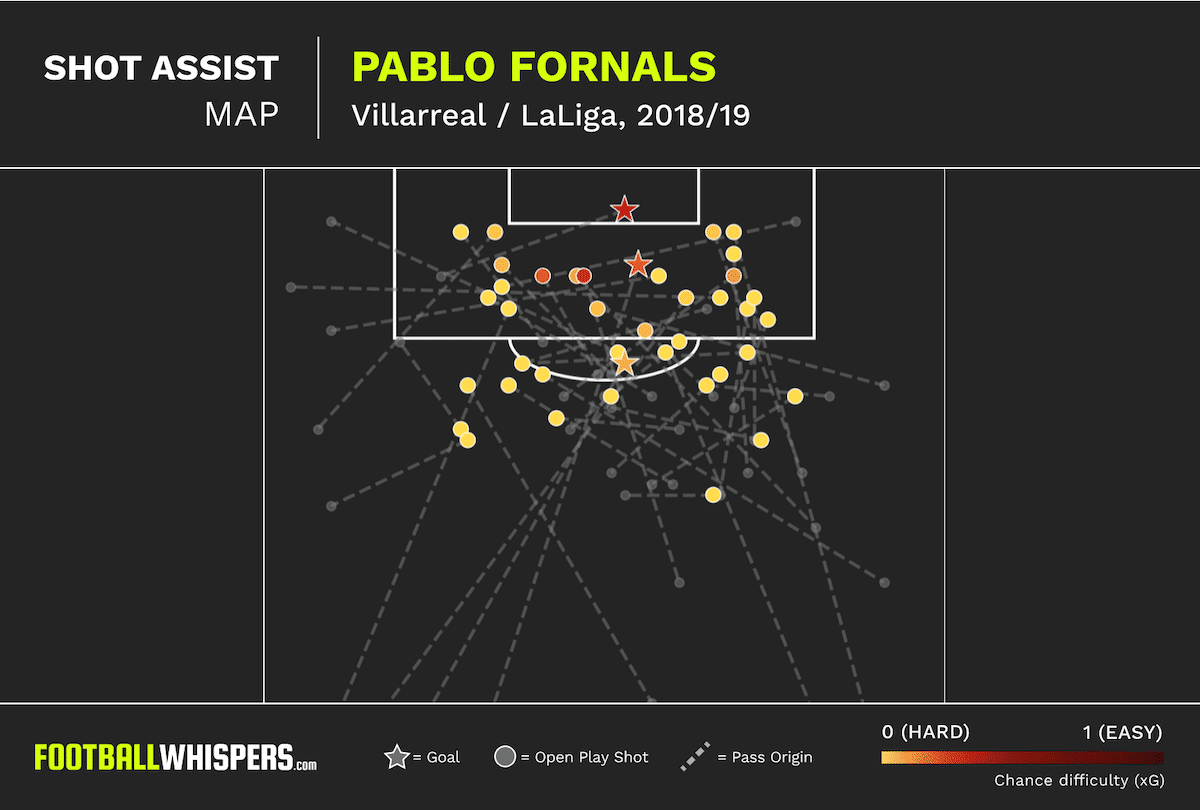 In this position, or on the left and right, Fornals has developed an ability to pop up in space and look for the runners ahead. At West Ham, this could work to great effect given Javier Hernández's skill at playing off the defender's shoulder.

Marko Arnautović is different from the Mexican but would still likely benefit from a player of Fornals' vision and technique, someone who can flash a teasing ball across the six-yard area or play an intricate one-two on the edge of the area to fashion an opportunity.

Given their net spend of £81million last summer, it will be interesting to see who they can afford this time around. While Gómez, Lobotka and Sanson are likely to cost around £30million, Fornals at £24million could prove to be one of the bargains of the summer.