It was on February 2, 48 hours after Arsenal, that Arsène Wenger challenged the German playmaker to justify his record salary by becoming a leader on the pitch.

But 11 months after making Özil the highest-paid Gunners player of all-time on around £350,000 a week, the German is anything but.

In fact, he can’t even get into the team with just two Premier League starts since the start of November.

Admittedly, Unai Emery’s appointment and well before Arsenal began to try and forge a new identity under the Spaniard.

However, the recklessness of such a decision speaks volumes for how the club was being run.

Quite simply Arsenal had backed themselves into a corner and were in a situation where they had to pay the then 29-year-old such a ludicrous sum of money. It proved more symbolic than strategic.

Allowing their supposed star asset to run down his contract to leave himself just six months from free agency was careless but the prospect of losing him to Manchester United – was that even a genuine prospect? – for absolutely nothing was too embarrassing a burden for the board to bear.

As beloved as he’s been at the Emirates, Arsenal fans are forever quick to defend his productivity against the tides of criticism surrounding his criticism, Özil increasingly appears a relic in the Emery era. And an expensive one at that.

He is under contract in north London until 2021, when he will be 32 and any sense of transfer value would have been eradicated, save a token fee. Should that situation play out, the gross mismanagement that led to his new deal will have cost the club a staggering £63.7m.

Given the lack of transfer resources available to Emery last summer, and maybe next summer should they fail to finish inside the top four, what was proclaimed as securing the future of Arsenal was anything but.

If, as increasingly appears the case, the 2014 World Cup winner is not part of Emery’s long-term plans, Arsenal’s No.1 task in the next two transfer windows should not be finding some competent defenders – it must be finding a new home for Özil.

How it’s come to this in less than a calendar month is a mixture of bad planning, Wenger’s selfishness in not revealing in his plans and Emery choosing his own path.

Had the board known (and maybe they did) the veteran Frenchman was to leave six months later and that a press-heavy coach such as Emery was to be appointed, that should have raised a huge red flag.

Either former CEO Ivan Gazidis didn’t know, or he chose to ignore it, instead trying to continue the feelgood factor and the idea of the club being shrewd in the wake of Alexis Sánchez’s sale to Manchester United and the signing of Pierre-Emerick Aubameyang from Borussia Dortmund.

The result of that is to lumber the new regime with a rather large white elephant of which the market has significantly shrunk due to his age and that mammoth salary.

In terms of ability, Özil is undoubtedly a unique talent who can be a pleasure to watch. He brings entertainment and an aesthetic quality to football. There is a reason why he is such a favourite at all the clubs he has played for.

But, while the good can be very good, it is too infrequent and, as Emery has discovered, he also appears a player in decline and an individual either not willing or capable of altering his game to adapt.

The primary tenets of Emery’s philosophy so far at Arsenal has been encouraging his defenders to play from the back, maintaining a high defensive line and ensuring intensity on the ball is matched off it via pressing.

For Özil, anything resembling defensive duties are anathema. He is an old-style No.10 – give him the ball and he’ll produce magic. He can’t function properly if he’s having to chase Fernandinho around the pitch.

In terms of creativity, Özil’s numbers are still hovering around elite level. He’s averaging 1.70 open play key passes per 90 to rank fourth among Premier League midfielders and places first for his 0.33 expected goals assisted per 90, but that’s it. 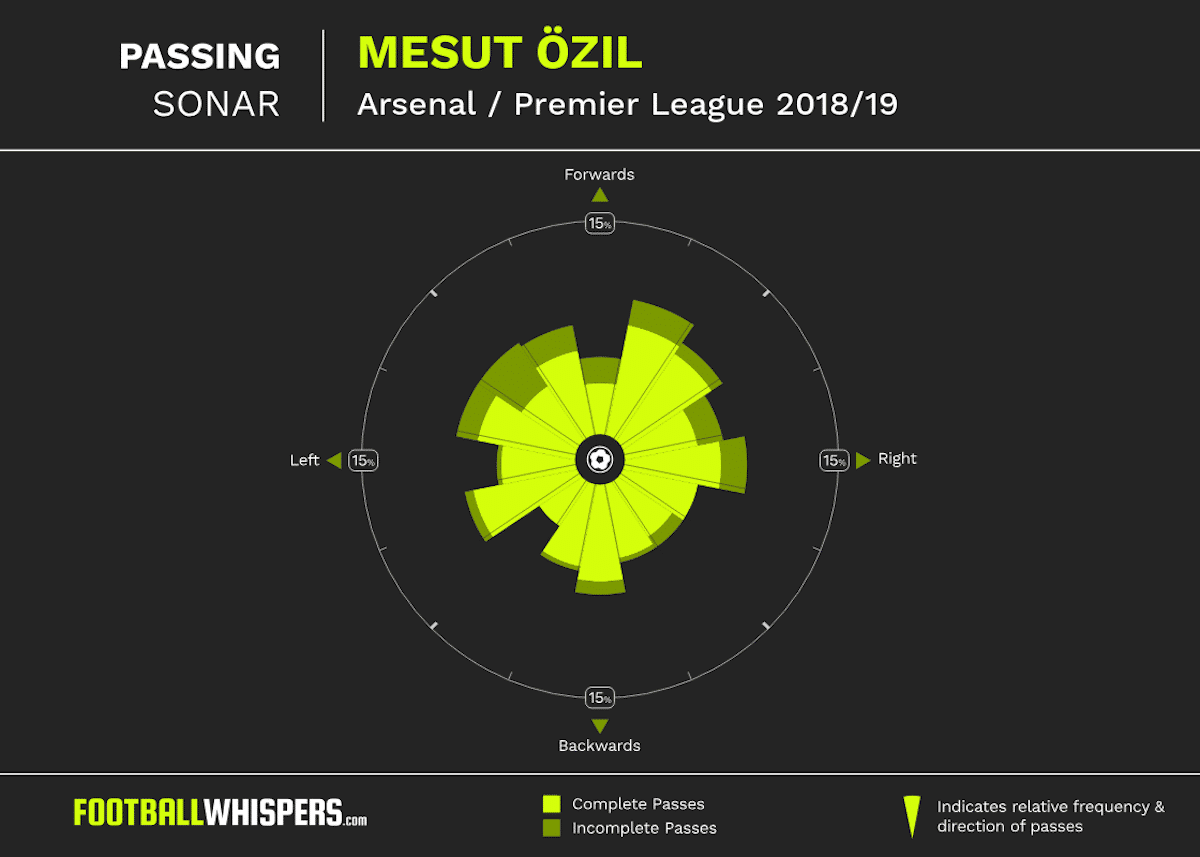 While stacking his current numbers against what he was producing in 2016/16 reveals only an increase in accurate through balls (0.31 versus 0.12) and marginal jump in successful take-ons (1.06 versus 1.01). Everything else is down.

Not only does Emery have a player unsuitable for his approach – the forecast that eventually the Spaniard will revert to a 4-3-3 as his preferred formation only heightens this – but one whose production is largely stalling. Oh, and he’s on £350,000 a week.

The question for head of football Raul Sanllehi and head of recruitment Sven Mislintat is surely not if can he stay, it’s where can he go?

It’s difficult to identify an appropriate and credible home. The very best English sides appear well stocked for playmakers and those in the Premier League's second tier would either not appeal to Özil or would be able to come close to matching his salary.

Of Europe’s major spenders outside of England, Paris Saint-Germain are shedding their frivolous image plus have a coach in Thomas Tuchel who doesn’t look a good fit for his countryman. Real Madrid are unlikely to bring him back to the Bernabéu at 30, especially as Florentino Pérez clings to his savings jar marked, “For Neymar”, while Barcelona’s 4-3-3 is completely incompatible. 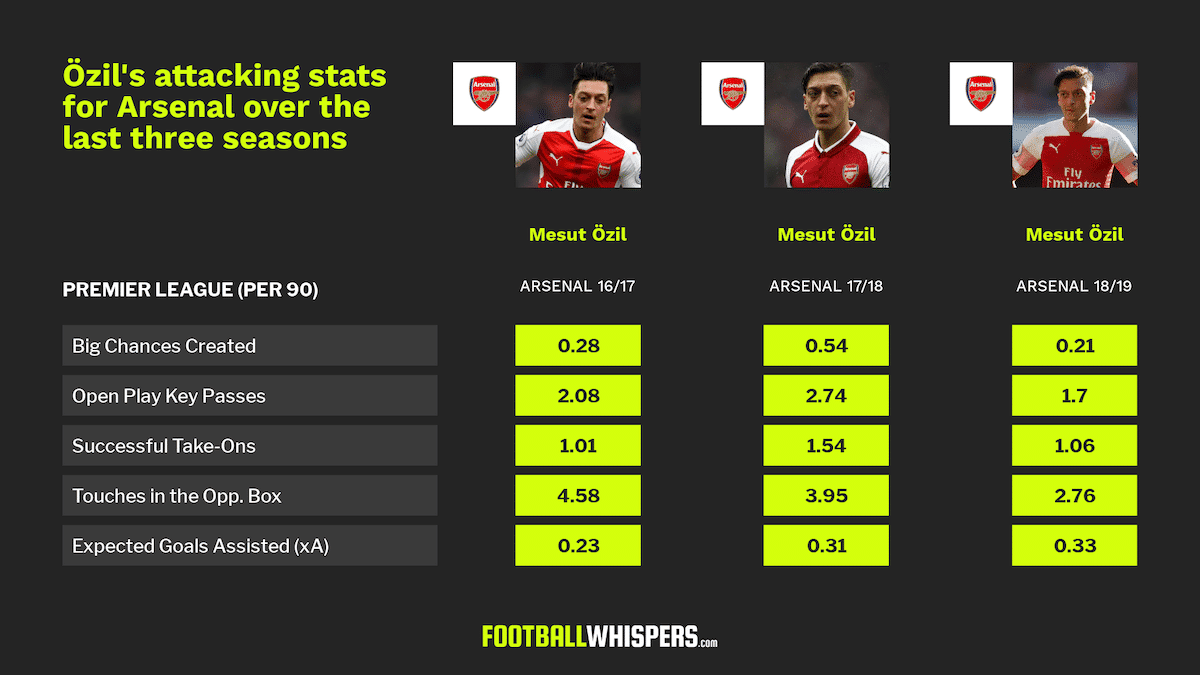 It leaves Bayern Munich, who are in the process of restructuring an ageing squad so quite how a post-prime Özil fits into that is anyone’s guess and the Serie A giants.

Juventus have designs on world domination but have an expensive veteran to build around in Cristiano Ronaldo, why buy another?

Roma and AC Milan won’t, and probably can’t, pay his wages, nor does he fit into Mochi’s buy-young methods at the Stadio Olimpico, meaning it’s Inter or bust.

That is unless a Chinese Super League club are willing to return to the financial abandon of 2016-2017, which looks unlikely following the introduction of a transfer tax on overseas imports, but would that even suit Özil?

After all, 30 is still an age where elite footballers picture themselves competing regularly at the very top level, not fading towards retirement in the Far East.

Perhaps a structured loan to Fenerbahçe, where the Turkish sides cover a percentage of his wages, may prove the most appealing and likely to both player and club.

But it’s all so speculative and hypothetical rather than possessing any credible reasoning; fitting, given it increasingly appears both were behind the decision to grant him that lead weight of a contract at the start of the year.