Perhaps the most refreshing element of Unai Emery's embryonic Arsenal reign has been the Spaniard's capacity to make bold calls.

Of course, that is what a manager is paid to do, but Emery's decision to leave Mesut Özil on the bench for the duration of his side's 2-1 win at Bournemouth on Sunday reveals what a courageous, competent leader he is.

As expected, Özil's absence from the starting line-up was headline news.

After the game, Emery was quizzed about it. Özil, the coach explained, was dropped on the basis that he would struggle in a “very demanding match with physicality and intensity”.

To some, the notion that a player who has played 120 minutes in a World Cup final is not adequately conditioned for the rigours of a game against Bournemouth is preposterous.

Indeed, this is the playmaker's sixth season in England. Since arriving from Real Madrid in 2013, he has been at once Arsenal's greatest creative influence and most perplexing enigma, someone who, at times, has typified the term ‘luxury player'.

But even then, one would assume that he is capable of rising to a testing away-day assignment.

Emery clearly sees things differently. Having retired from international duty, Özil had two weeks off following the 1-1 draw with Wolverhampton Wanderers but his club manager still felt as though Alex Iwobi and Henrikh Mkhitaryan, the latter of whom played 180 minutes for Armenia last week, were better suited to slotting in behind Pierre-Emerick Aubameyang for the trip to the Vitality Stadium.

It has sparked speculation over Özil's relationship with Emery and his future at the club. That seems reckless, though. Emery will not shirk at making a bold decision if he feels it helps the team, even if that means dropping someone of Özil's ability.

Having reviewed Bournemouth's previous games, though, the Arsenal boss will have seen how devastating they can be when they pour forward.

Eddie Howe's men put four past Leicester City and Watford, and three past Fulham. Although they lost 2-1 to Manchester United, the Cherries had José Mourinho's side on the ropes after Callum Wilson's early opener before Anthony Martial intervened.

At their best, Bournemouth are an energetic attacking unit, one with the quality to take Arsenal's defence apart.

Emery knew this. Prior to Sunday, he will have noted how effective Bournemouth can be down the flanks. Ryan Fraser has been excellent this term, David Brooks is a livewire and Charlie Daniels is an enterprising presence at left-back. With that, the former Sevilla boss decided that Iwobi and Mkhitaryan's industry would help the Gunners' chances.

Ultimately, he was right. Arsenal travelled back from the south coast with three points in the bag; something they had failed to do on their previous two trips. Mkhitaryan, admittedly, did not enjoy his most clinical game, but the fact that he attempted six aerial duels and made five ball recoveries suggested that he offered the industry and aggression Emery required.

That is not to say that such a tenacious approach is beyond Özil. It does, however, indicate that Emery, in a relatively short space of time, has already gotten to know his players very well. He is a shrewd and deep-thinking tactician, someone who will sacrifice the Özil's guile and craft for the grittier, more combative styles of Iwobi and Mkhitaryan.

When Arsenal picked Emery as Arsène Wenger's successor, they knew they were getting a coach who would oversee an evolution. Having managed Paris Saint-Germain, it was certainly not a job to intimidate the 47-year-old and a series of daring calls suggest that the north London club chose wisely, avoiding the trap of choosing the most obvious candidate that may not actually be a natural fit (see: Manchester United). 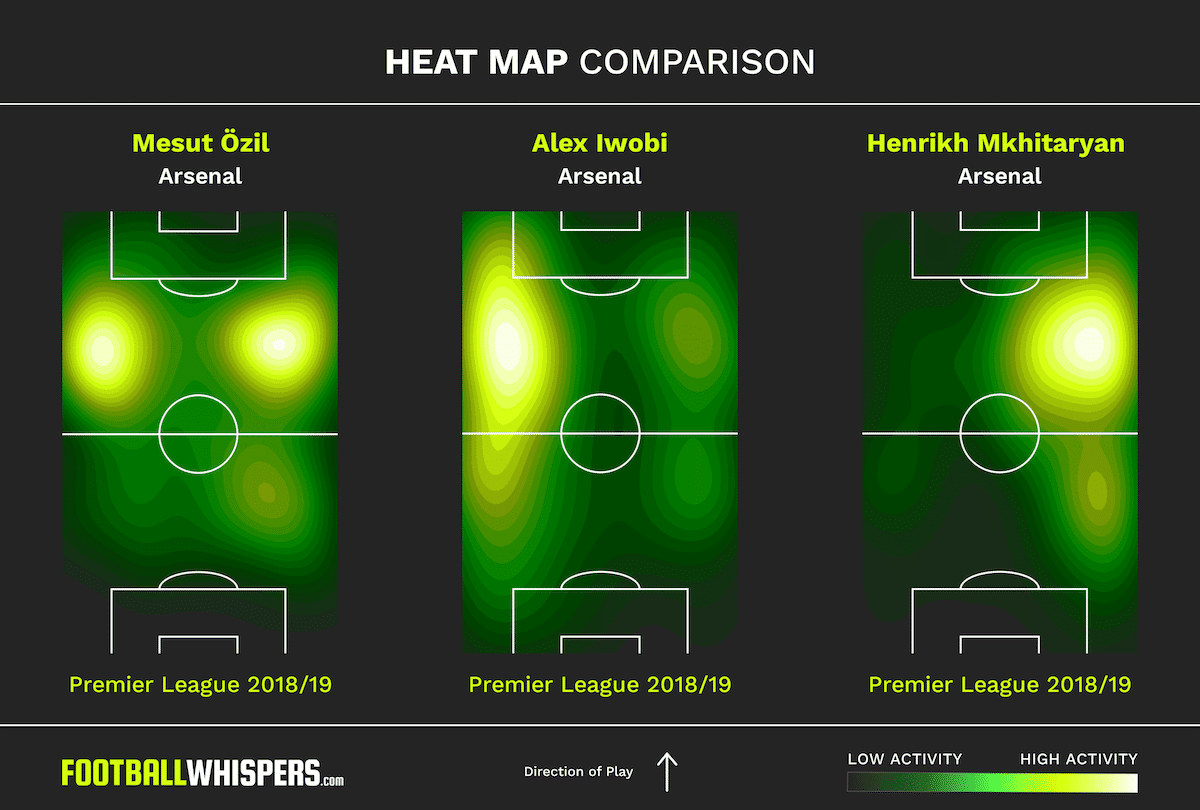 And Emery has undoubtedly shaken things up at the Emirates. He has demonstrated a proclivity for trying to change the game sooner rather than later (often making substitutions at half-time), his gradual integration of Lucas Torreira into starting line-up was an astute move and his variations between a back three and four show how he will tailor his team to each specific match.

Özil's capture from Real in 2013 was a watershed moment. At that point, Arsenal were far from the Premier League's heaviest spenders. The German's transfer came close to trebling the club's previous highest outlay on a player. For that, he has, at times, been afforded exalted status but the landscape has changed significantly.

Although Arsenal were expected to benefit from Özil's international retirement, Emery refuses to lose focus and surrender his principles. He sees the German not as the headline act but as a member of the squad, one who will have a major influence on some games but a minimal impact on others.

Having stretched their unbeaten sequence to 17 games, it's safe to say Emery is doing something right. But the immediate future still poses an intriguing question: having watched a Tottenham side of breathtaking intensity batter Chelsea, will he keep Özil on the bench for the visit of Spurs on Sunday?