With his contract set to expire at the end of the season, it has long been expected this will be Mesut Özil‘s last season at Arsenal. But the World Cup winner, if reports are to be believed, could be set to stay in the Premier League.

According to  claim Özil has already told Arsenal team-mates that he will be moving to Old Trafford.

United boss José Mourinho worked with Özil at Real Madrid, and the form the German playmaker produced during their three seasons together is still regarded as the best period of the 29-year-old's career. The Portuguese coach would be confident of coaxing a similar tune from the enigmatic creator at Old Trafford.

The pair haven't always seen eye to eye. In his autobiography, The Magic of the Game, Özil reveals that Mourinho once called him a “coward”, and recounts a dressing down the Portuguese once gave him in the Madrid changing room.

The pair haven't always seen eye to eye. In his autobiography, The Magic of the Game, Özil reveals that Mourinho once called him a “coward”, and recounts a dressing down the Portuguese once gave him in the Madrid changing room.

“You think two beautiful passes are enough,” said Mourinho, as told by Özil. “You think you're so good that 50 per cent is enough.”

“He pauses. Stares at me with his dark brown eyes,” the player remembers. “I stare back. Like two boxers at the stare-down before the first round. He shows no emotion.”

But, crucially, the dichotomy of the relationship between Özil and his former manager is revealed in the next line: “[He] just waits for a response from me. How much I hate him right now. And I love Mourinho actually.”

It may not have been an easy relationship that Özil and Mourinho enjoyed, but that's just the point: the United manager kept him on his toes and motivated; perhaps he's gotten too comfortable at Arsenal in the limping latter years of Arsène Wenger's reign.

Mourinho wants Özil and, at this stage of his career, maybe Özil needs Mourinho.

Where Would Özil Fit In At United?

Available on a free, snaring a player of Özil's undoubted quality would be a coup for United, but there are reasons to believe the former Werder Bremen standout isn't exactly the sort of player the Red Devils need at this time.

An archetypal socks-round-the-ankles kind of No.10, the insouciant creator is at his best in a central attacking midfield position behind the striker, but can also operate wide on the right flank, cutting inside onto his stronger left foot. 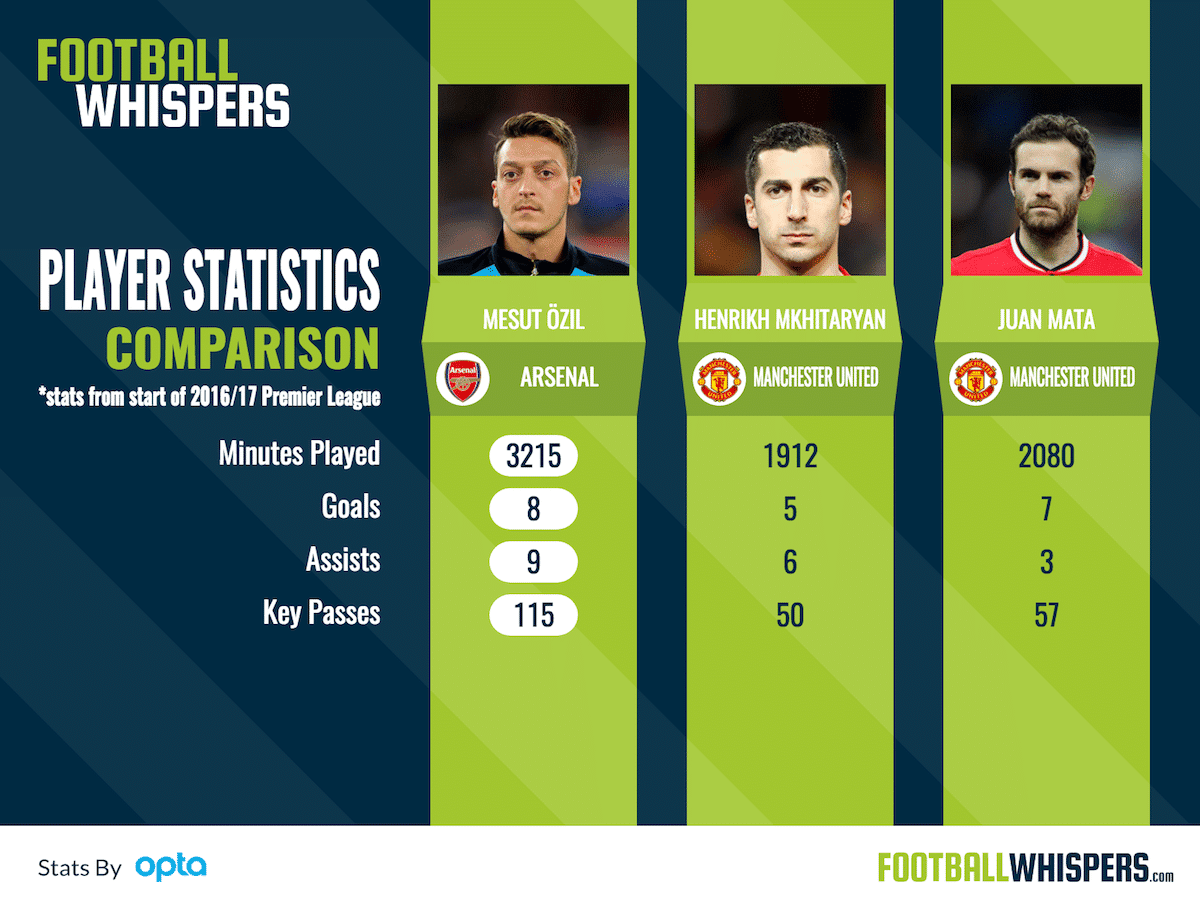 In Mourinho's preferred 4-2-3-1 system, Mkhitaryan has often started as the team's No.10 this season, with Mata operating on the right flank. Both have shown good form and either could consider themselves unfortunate if they were to be removed from the side to make way for a new addition, particularly one who has flattered to deceive of late.

However, even when seemingly out of form, Özil remains incredibly creative. Since the start of last season, his average of 3.22 key passes per 90 minutes in the Premier League is far better than that of Mkhitaryan (2.35) and Mata (2.47).

Özil has registered five assists in the Premier League this season, the same as Mnkhitarya. But the Armenian and Mata, who have six assists between them, are averaging 2.12 and 2.13 key passes per 90 respectively this term, while the Arsenal man is averaging a staggering 3.66.

United rank second in the league for conversion rate, finishing off 20.7 per cent of their shots so far this season (up from a lowly, 17th-ranked 13 per cent last term), whereas Arsenal convert just 15.1 per cent.

Had Özil been playing in a more clinical side, he could expect to have a much healthier assists return by this point. Were he supplying such lethal finishers as Romelu Lukaku, Anthony Martial and Marcus Rashford, his numbers would be telling a completely different story. And all during a period in which he is considered to be disinterested and ineffective at the Emirates.

Özil is widely characterised to be lacking in defensive acumen, contributing little to his side's play without the ball and exhibiting an unwillingness to work, press and track back. There have been times during his Arsenal career when this has been an indisputable flaw in the former Madrid man's game, but it hasn't always been the case.

While working with Mourinho at the Bernabéu, Özil, stationed either on the right of a 4-3-3 set-up or centrally in 4-2-3-1, showed the kind of workrate demanded by the former Porto and Chelsea boss. So much so, even, that Mourinho would regularly withdraw the exhausted German after 70-or-so minutes – a scenario reminiscent of how Mata has redoubled his defensive efforts and is often taken off before full time.

Rediscovering this kind of defensive output will be a prerequisite of any potential United move for Özil, as Mourinho does not tolerate passengers.

While working under Mourinho in the Spanish capital, Özil scored 27 goals and registered an astonishing 81 all-competitions assists in three seasons. If the Old Trafford boss is able to get the German back to anything approaching his Real Madrid form, he could be a transformative signing for the Red Devils.

United's attacking output has improved manifold this season, but they are still a step behind Pep Guardiola free-scoring Manchester City in terms of offensive production when the Premier League looks to be decided by its challengers' attacking prowess. Someone with Özil's creative powers could all but eradicate that gap for the 20-time champions.

With Wenger, the gifted assist master has enjoyed a relationship of convenience, a long leash which he stretched to its limit. But joining United would see the resumption of a relationship of mutual necessity; Özil needs Mourinho, and Mourinho could certainly find a use for Özil.