Since Liverpool’s rampant 3-0 victory over Manchester City in the first-leg of the Champions League quarter-final in 2018 just one goal has been scored by a Reds midfielder from outside the penalty area.

It arrived earlier on this season when Georginio Wijnaldum’s fizzing effort was too hot to handle for Dean Henderson in the Sheffield United goal. Kind of.

Yet in the space of 90 minutes, that total was eclipsed. Alex Oxlade-Chamberlain rattled in two from outside the box during Liverpool’s 4-1 victory over Genk. And this was just days removed from the new No.15 almost winning the game for the Reds at Old Trafford with a long-distance effort.

The former Arsenal man is still nowhere near his best but the 26-year-old is now starting to look like the Oxlade-Chamberlain fans adored prior to the horrific knee injury. He was buzzing about the pitch against Genk, picking up positions between the lines and drifting into a wide right area to allow Mohamed Salah to occupy central spaces.

The balance was perhaps a little off but it’s to be expected. It was the first time the midfield trio of Fabinho, Oxlade-Chamberlain and Naby Keïta had been picked and the back four was makeshift, with Joël Matip and Trent Alexander-Arnold both missing.

In the eyes of some fans, Genk should’ve been another Maribor. But the Belgian side managed to hold Napoli to a 0-0 draw last time out in the Champions League. Furthermore, before Liverpool’s visit, they’d only lost two of their last 23 matches at home in Europe.

By no means are they world-beaters, but Felice Mazzù’s men are rarely turned over in Europe. It makes Liverpool’s showing even more impressive.

The away side dominated the ball, finishing the match with 75 per cent of the possession, they had more than double the number of efforts (17 to Genk’s eight) and completed three times as many passes as the hosts.

Jürgen Klopp’s side dominated and that was largely down to having two progressive players in the middle third. Both Oxlade-Chamberlain and Keïta are comfortable with the ball at their feet, they’re press-resistant and forward-thinking.

Absolute class from The Ox!! ?

First time ✔️
Outside of the boot ✔️
In off the crossbar ✔️

He's got his second of the night and it is truly sublime! pic.twitter.com/nqV2xBGnno

Liverpool’s usual midfield trio have helped the Reds control games in the past but very rarely have you seen the midfield being the creative and goal threats.

Yet no player on the night had more shots than Oxlade-Chamberlain (three) and Keïta’s 118 passes couldn’t be matched by any other individual on the pitch.

Having a midfielder rack up so many passes is something Liverpool fans are familiar with. However, it usually comes from the man sitting deepest. Yet the No.8 was all over the pitch and this highlights just how effective Keïta was at helping the visitors piece together attacking situations.

With Keïta constantly probing and the front three fairly narrow, it enabled Oxlade-Chamberlain to pick up pockets of space in dangerous areas. It's something the other midfielders at Klopp's disposal just don't have in their locker.

Jordan Henderson tends to drift wide when deployed as a box-to-box midfielder. Wijnaldum does so for the Dutch national team but his role for the Reds is slightly different.

Of course, it's all by design. The German tactician has different systems and different instructions for his players. Just because they line up in the same shape doesn't mean what they're tasked with doing is identical.

Oxlade-Chamberlain, however, is and always will be a wildcard for the Reds. He's got the dynamism to burst past opponents, the dribbling ability due to playing as a winger, the vision to pick a pass but also the technique to shoot from distance.

It's why his return to fitness is a genuine game-changer for Liverpool. 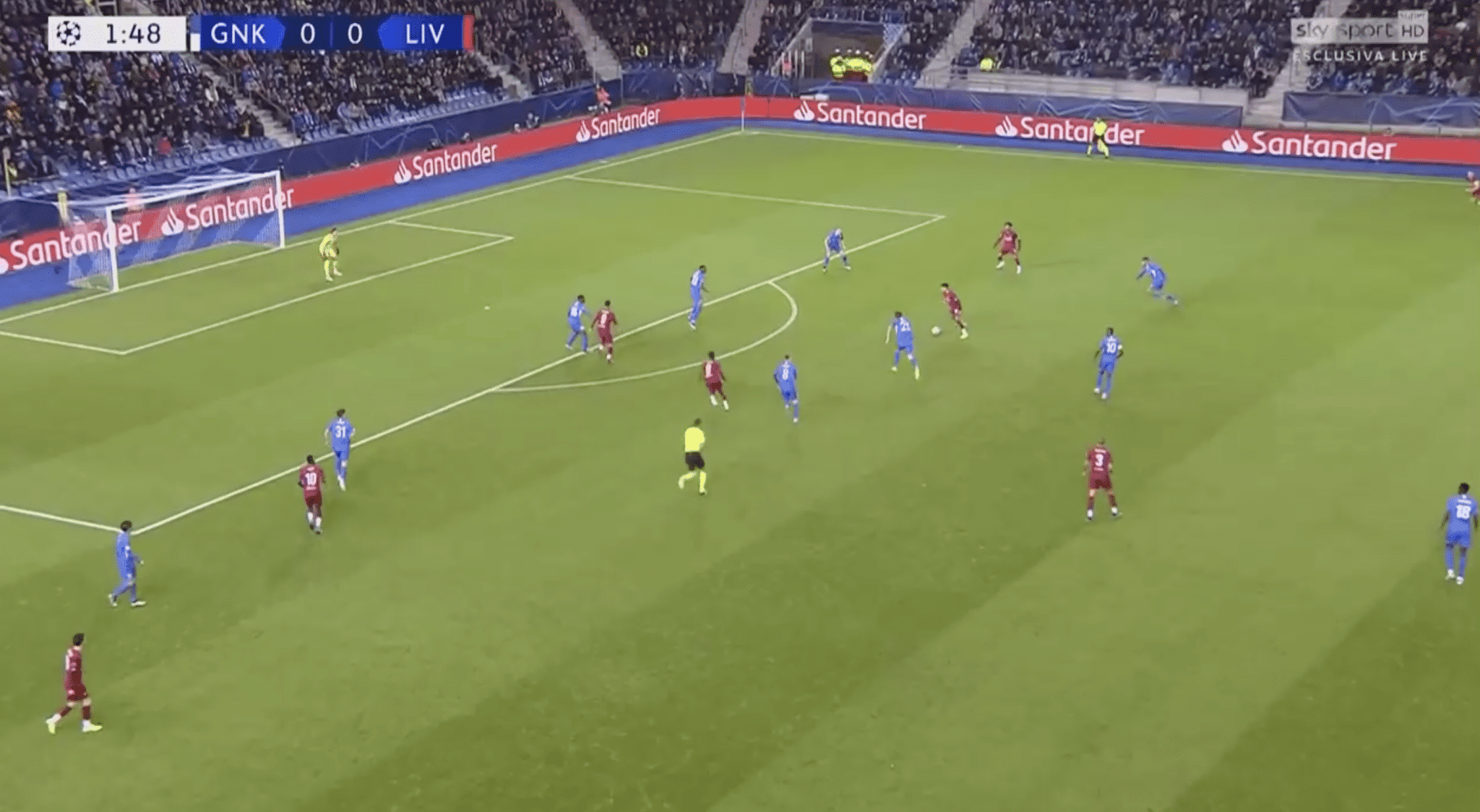 The screenshot above is just prior to the midfielder firing in the opener. He's in a fair amount of space but that is a result of the attacking players, and Keïta. During the build-up, the former RB Leipzig man was constantly on the move and this stretched the two-man Genk midfield. The ball is originally on the left and the pair shuffled over to block the play.

When Fabinho received the ball, Salah dropped a little deeper and drew out the left-back. When the Brazilian passed to Oxlade-Chamberlain, the highly-rated Sander Berge scrambled to close him down having originally been covering the opposing flank.

The Genk centre-back can't push out as it'd leave Roberto Firmino one-vs-one in the area. It'd also, potentially, leave Salah one-vs-one with the left-back if the Liverpool No.15 preferred that option.

Genk's reluctance to close Oxlade-Chamberlain down enables him to get a shot off. Via a deflection, it nestled in the bottom corner.

No other midfielder in the Liverpool ranks attempts that shot. In fact, very few of them even find themselves in such an intelligent position between the lines.

Oxlade-Chamberlain isn't going to start every game moving forward. But when he does, the Reds have another dimension to their attack and they'll be even trickier to nullify.