Jürgen Klopp may have called reports linking Alex Oxlade-Chamberlain with a move to Liverpool as “nonsense” in December but there are plenty of reasons as to why the Reds are keen to sign the Arsenal midfielder.

The Chelsea transfer target looked set to move to Stamford Bridge before Thursday's deadline after the Blues agreed a price with the Gunners. However, Oxlade-Chamberlain, reportedly, has his heart set on moving to Anfield.

The 24-year-old has just under 12 months remaining on his current deal at the Emirates and is tired of the lack of playing time Arsène Wenger is giving him in his preferred position.

Often utilised as a wing-back last season, he completed the full 90 minutes in the Premier League on just three occasions last season. It is easy to understand why he has no intention of signing a new contract the Emirates.

Despite delivering, in terms of output at least, he’s yet to be given a sustained run in the side and Liverpool are looking to capitalise on this by offering him regular involvement in the first team.

Another plus for the Reds is the fact the player shares an agent with Adam Lallana and the club are currently negotiating an improved deal with the former Southampton man who has found a new lease of life under Jürgen Klopp.

The club and agent appear to be on good terms and this can only be a positive. Oxlade-Chamberlain is reportedly on £65,000-per-week at Arsenal and the Anfield club would have no trouble hiking that up to around the £80,000-per-week, with Sadio Mané and Gini Wijnaldum reportedly on £90,000-per-week.

Liverpool are in the market for players who are intelligent both on and off of the ball, and who can play a variety of roles. They need to flexible in their style, have an abundance of pace, and importantly, not quite have reached their potential. It also helps to have played for Southampton.

Oxlade-Chamberlain ticks all of those boxes.

The former Saints man has played a whole host of positions for Arsenal throughout his time at the club. He’s featured on both flanks and centrally, plus, he has the ability and skill-set to operate as a No. 10 or even as a right-back in Klopp's system.

Oxlade-Chamberlain could easily play as part of the Liverpool midfield or as part of the attack. He suits a counter attacking system, but he’s also comfortable playing a possession style in which patience is necessary.

He appears to have stagnated at Arsenal a little but exposure to first-team football on a regular basis could see him flourish. He’s switched on defensively and is disciplined enough to not neglect covering the adventurous full-backs in his team.

Throughout his entire Arsenal career, which spans five and a half years, he’s averaged 1 tackle and 0.7 interceptions per 90 minutes. He completes 2.2 dribbles and 82 per cent of the 23.6 passes he attempts. He’s scored 13 goals and has 18 assists. 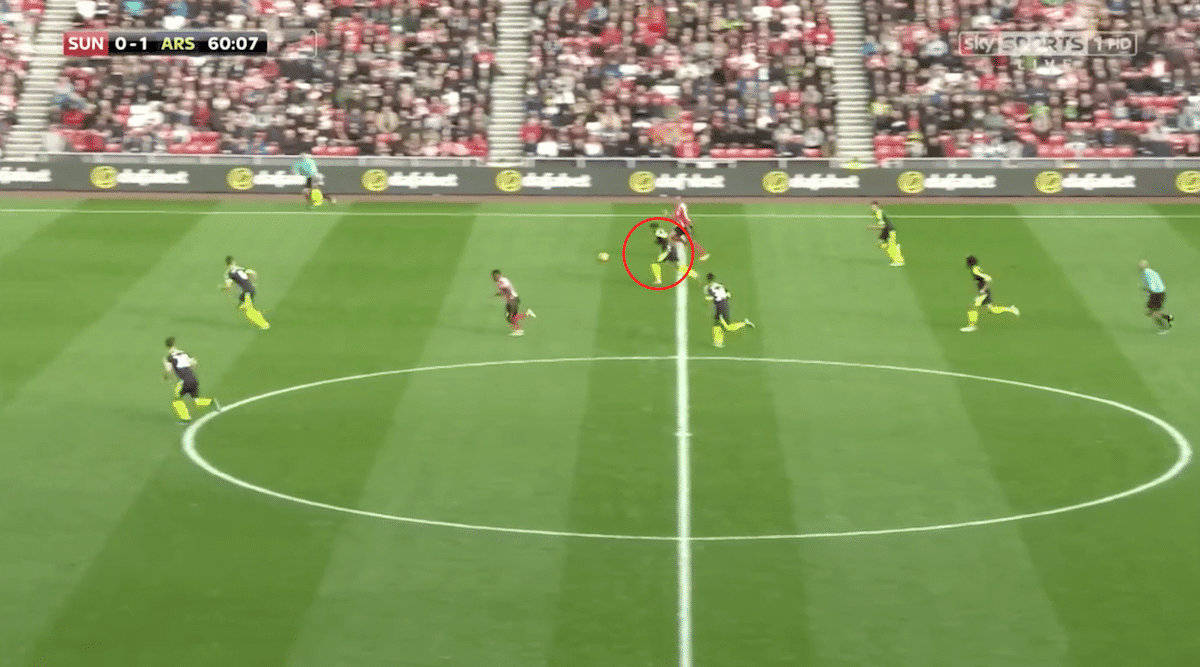 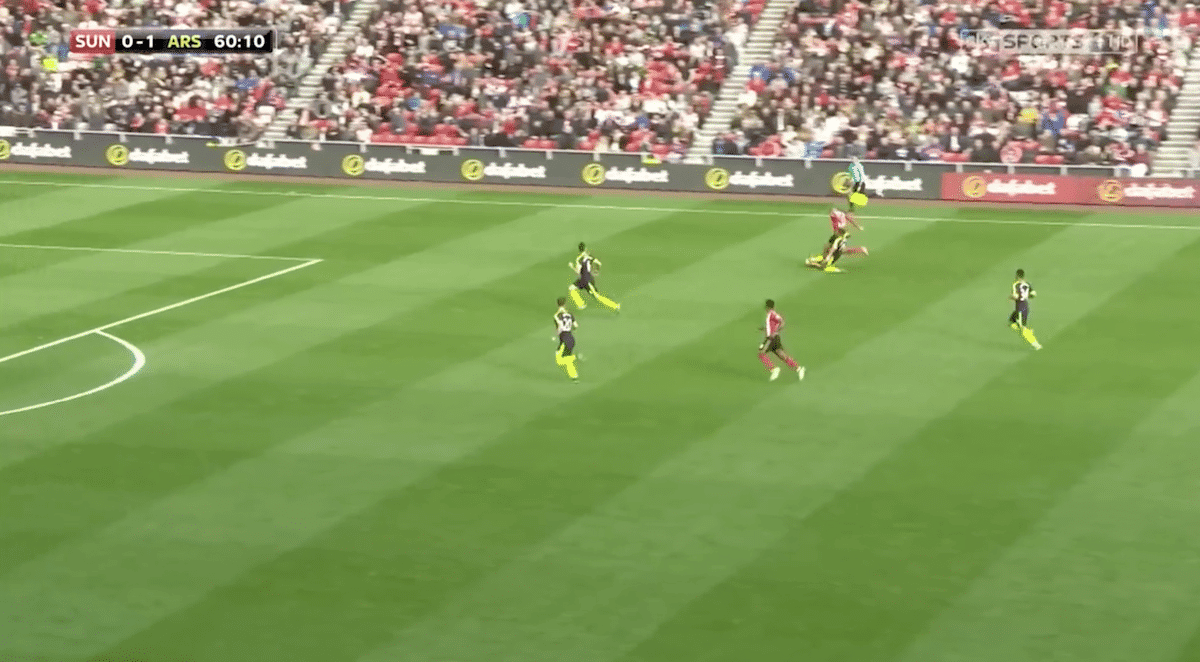 In the above two pictures you see the defensive side of Oxlade-Chamberlain’s game. Arsenal are just one goal to the good and Sunderland are threatening to hit them on the break. Kieran Gibbs, the Arsenal left-back, is caught out in the attacking half as Sunderland manage to quickly transition from defence to attack.

Chamberlain gets back to cover down the left, keeping pace with Wahbi Khazri before making a tackle to dispossess him, putting an end to the potential threat. He did a job you would normally associate with Francis Coquelin or Mohamed Elneny.

It would be something he would have to do at Liverpool too, with both full-backs, James Milner and Nathaniel Clyne, at times almost acting as wingers, meaning the wide players and the centre-midfielders both have to cover the space. 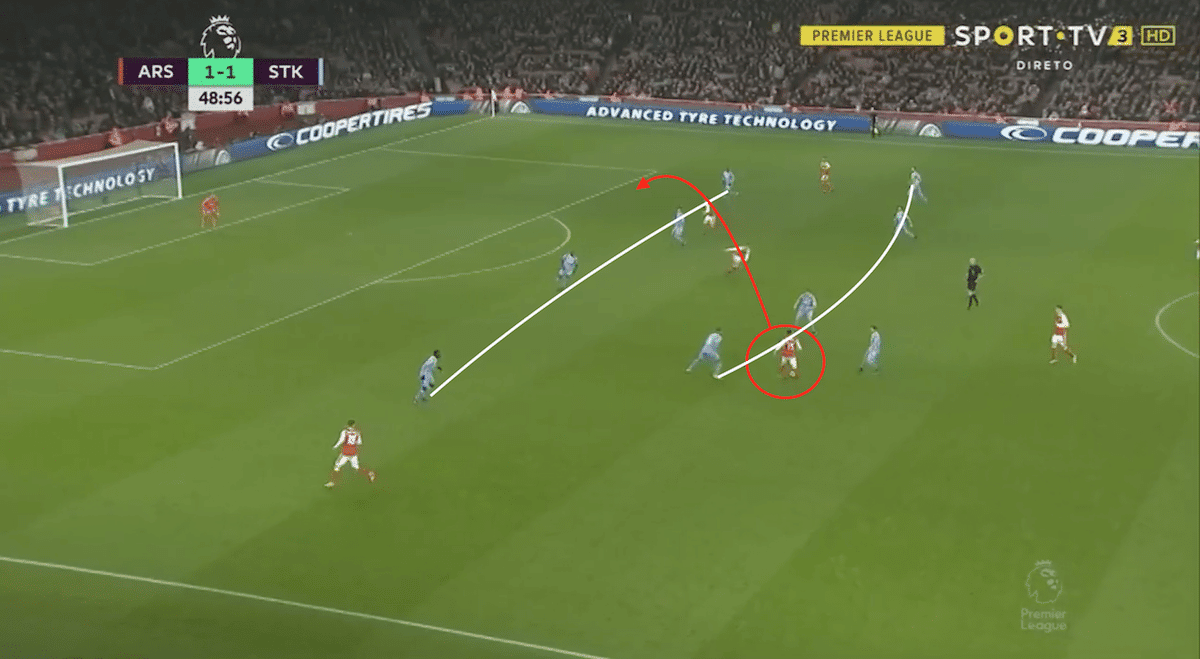 The above picture, taken from Arsenal’s match against Stoke City when the scoreline was 1-1, shows the build up to the goal that puts the Gunners ahead. Chamberlain finds himself in a central area, a position the Liverpool attackers often find themselves in, with Stoke having eight men behind the ball. He could play the ball to the Arsenal man between the lines but with the Stoke midfield retreating it could all become congested rather quickly.

Instead he lofts the ball over the defence and into the path of Mesut Özil who flicks the ball past the advancing keeper. Spotting such a pass is easy but executing it is something else entirely. Liverpool often find themselves against teams who want plenty of bodies behind the ball. Having the ability to unlock is a welcomed trait. 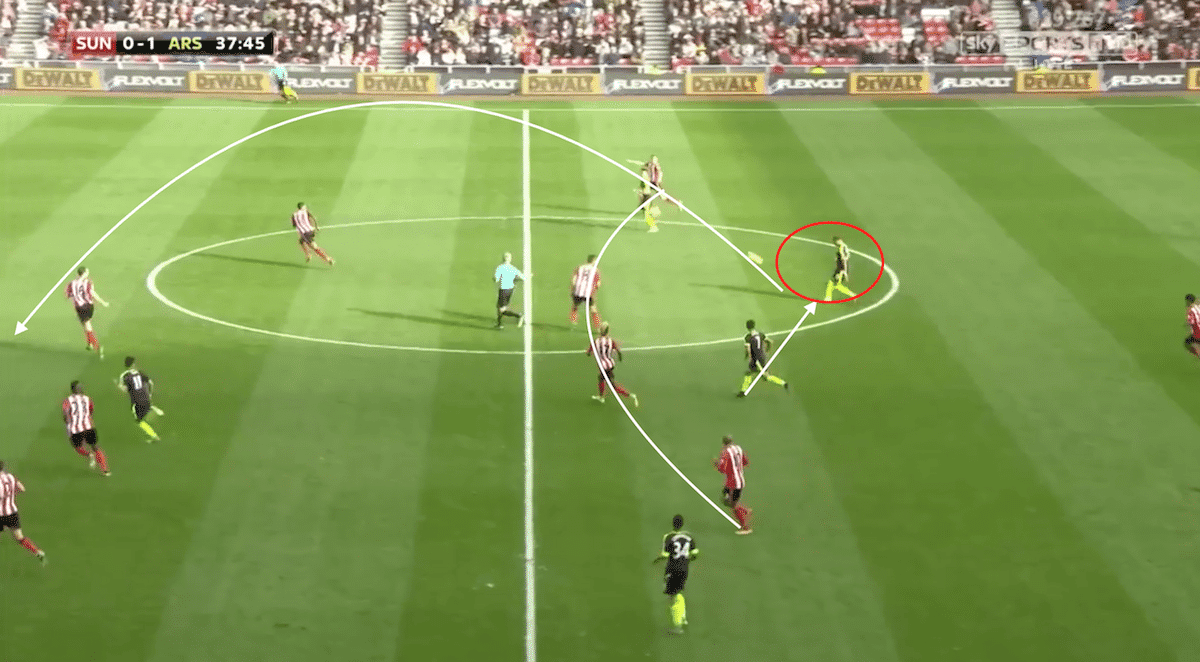 Again it’s a picture from the match against Sunderland and again it’s Chamberlain playing the ball over the top to take two defensive lines out of the game. He’s circled in red and has just received the pass from Manchester City transfer target Alexis Sánchez. He plays a first time pass over the top and it’s a one that catches a disjointed Sunderland defence off guard and Özil rushes to get on the end of the pass before being thwarted by Jordan Pickford.

Can you imagine Mané, Divock Origi or Daniel Sturridge racing onto Chamberlain's passes with acres of space? It's a devastating possibility. 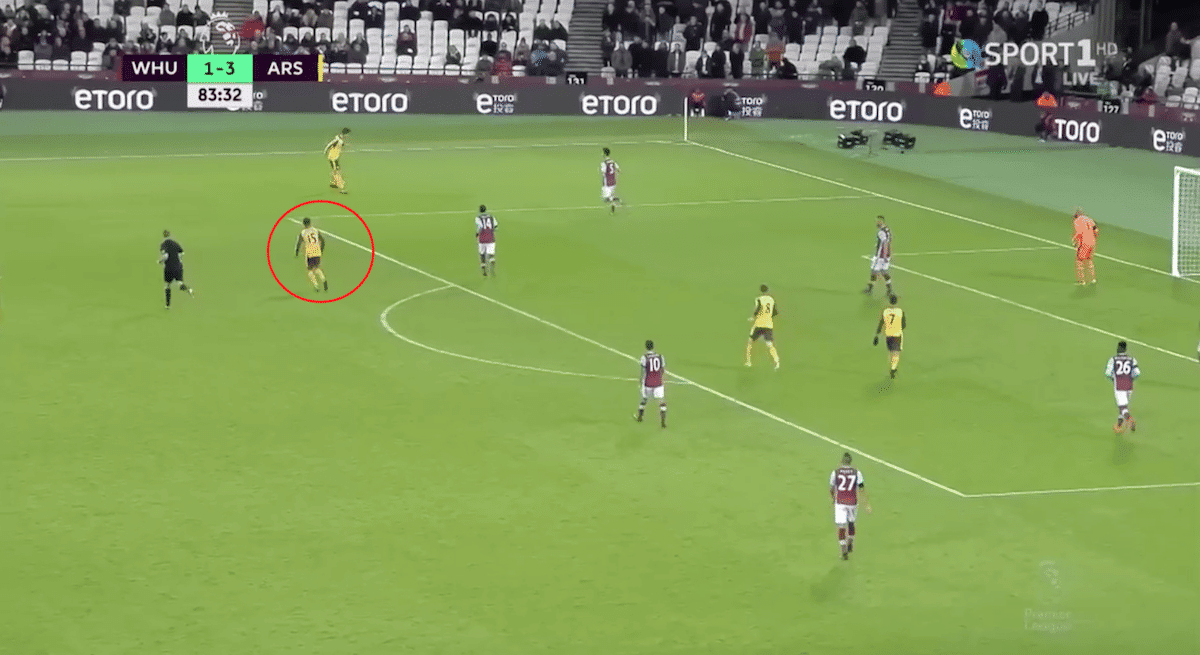 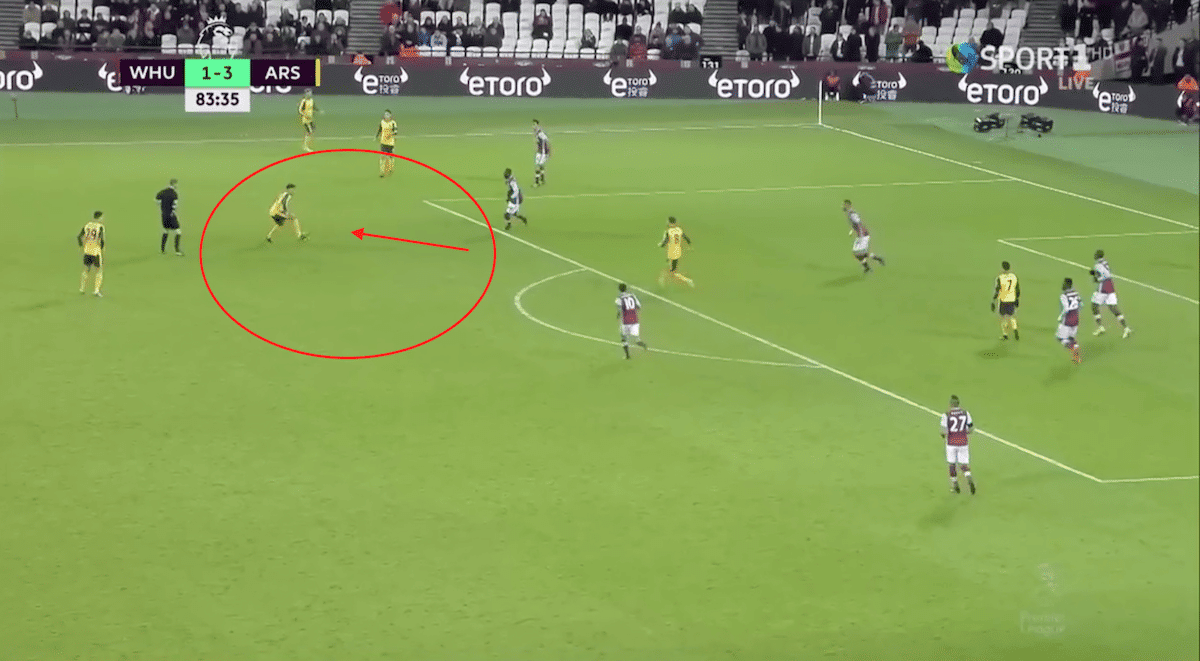 It’s a subtle move but in the pictures above Chamberlain drops off and moves away from the penalty area before receiving the ball. It’s a move which allows him time and space to take a touch and ready himself before firing the shot home to put Arsenal 4-1 up against West Ham.

Had he stayed in his initial position and received the ball there it would have been easier for the defence to close him down. Those two yards made a huge difference.

Liverpool are top scorers in the Premier League and many of their goals have arrived because the opposition can’t deal with the movement in the final third. In the three pictures above Oxlade-Chamberlain shows he wouldn’t be out of place in that fluid system.

He moves into the space between midfield and defence before playing a first time pass out to the left, which stretched the Nottingham Forest team and creates more pockets of space centrally. It’s this ability to spot the gaps and the one touch passes that show he would be a good fit at Anfield.

All things considered, Oxlade-Chamberlain would be an interesting signing for Liverpool. Klopp could turn him into something special if he manages to harness his clear potential. He fits the club’s profile, the manager's profile and he’d add much needed depth to the squad.