It may be premature to suggest this given he's only played 619 minutes in the Premier League for the club, but Alex Oxlade-Chamberlain is turning out to be a shrewd signing for Liverpool.

Depending on which reports you believe, the Reds paid anywhere between £35-£40million for the former Arsenal winger. It was seen, at the time, as an excessive amount given he had just 12 months remaining on his current deal at the Emirates.

However, the Merseysiders paid over the odds to secure the signing of a player they had been interested in for well over six months, an indication that Jürgen Klopp felt his ability justified the hefty price-tag.

Life at Anfield started slowly with Klopp looking to get Oxlade-Chamberlain up to speed with the demands of his system.

He didn't make his first start for the club until the middle of September, away to Leicester City in the Carabao Cup. He didn't have the best of games and many took to social media to call him waste of money.

His next start arrived at the beginning of November when the Reds hosted Mairbor in the Champions League.

His first start in the Premier League came in the following match, a 4-1 win away to West Ham United. Klopp trusted Oxlade-Chamberlain to play a key role in his new look shape and he excelled on the right of a midfield four. Since then the minutes have been regular. He's not wasted the opportunities either and is continuously building on his previous match.

It was his role, however, in the 4-0 win over Bournemouth that has got a lot people talking.

There's been much debate over the England international's best position. He did well at wing-back for Arsenal, and he's impressed in a wide area for Liverpool, too, but it was as a centre-midfielder that he put in arguably his best performance for Klopp.

Liverpool fans are now used to seeing the 4-3-3 shape on paper morph into a 4-4-2 variation when in possession of the ball. Mohamed Salah, usually the man starting on the right of the attacking three, tucks inside and the right sided centre-midfielder would push on to occupy the space.

It wasn't like that against Eddie Howe's side. Yes, the Liverpool No.21 did push on down the right at times but it was a much more interchangeable three in the middle third. At times it would be Jordan Henderson sitting while Oxlade-Chamberlain and Gini Wijnaldum pushed on to support the attack. But throughout it was obvious Henderson had been given license to roam from his normally disciplined position.

It was a rotisserie of pressing from the midfield three.

Oxlade-Chamberlain was filling in as a deep midfielder but he wasn't just there to make up the numbers. He seemed to thrive in a central area and this is where he really had an impact on the game.

He showed intelligence and great awareness to execute his part in the system. Back in August we wrote a piece as to why Oxlade-Chamberlain was perfect for Klopp, on paper, and it appears as though it's true in practice.

Could Oxlade-Chamberlain be Klopp's new Lallana?

During the first half of the 2016/17 season Adam Lallana caught the eye as a centre-midfielder. It was clear that he was Klopp's latest project. The former Southampton man was by trade an attacking midfielder but the Liverpool manager decided he had the right profile to play as a more attack minded box-to-box midfielder.

He was press resistant, comfortable with the ball at his feet, understood the pressing triggers and had the ability to take players out of the game. But his form tailed off as injuries took their toll on the Liverpool team.

The Lallana experiment made it abundantly clear what Klopp wanted from his centre-midfielders. It's why the German manager was so intent on signing Naby Keïta.

He wanted dynamism and athleticism in the middle third. The RB Leipzig man is joining in the summer but Klopp needed that now. The move for the 24-year-old makes a lot of sense when you look at it like that. 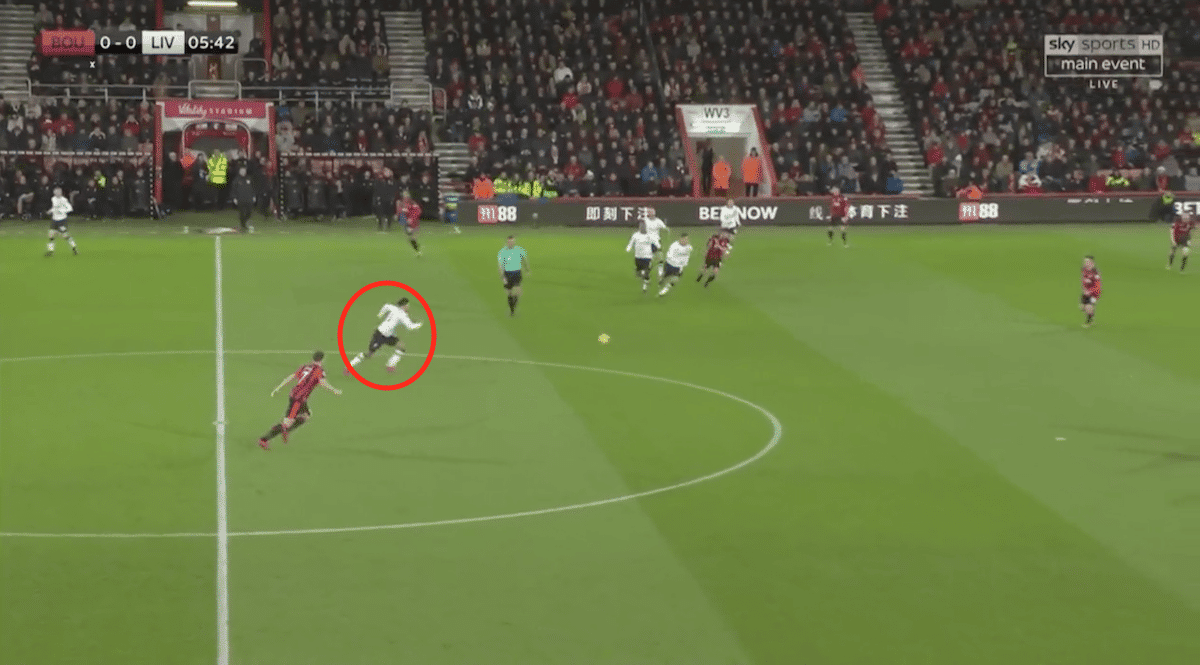 It was pretty evident early on that Oxlade-Chamberlain was relishing his chance to play in a central area. In the image above you see him, circled in red, aggressively driving forward to intercept a wayward pass. 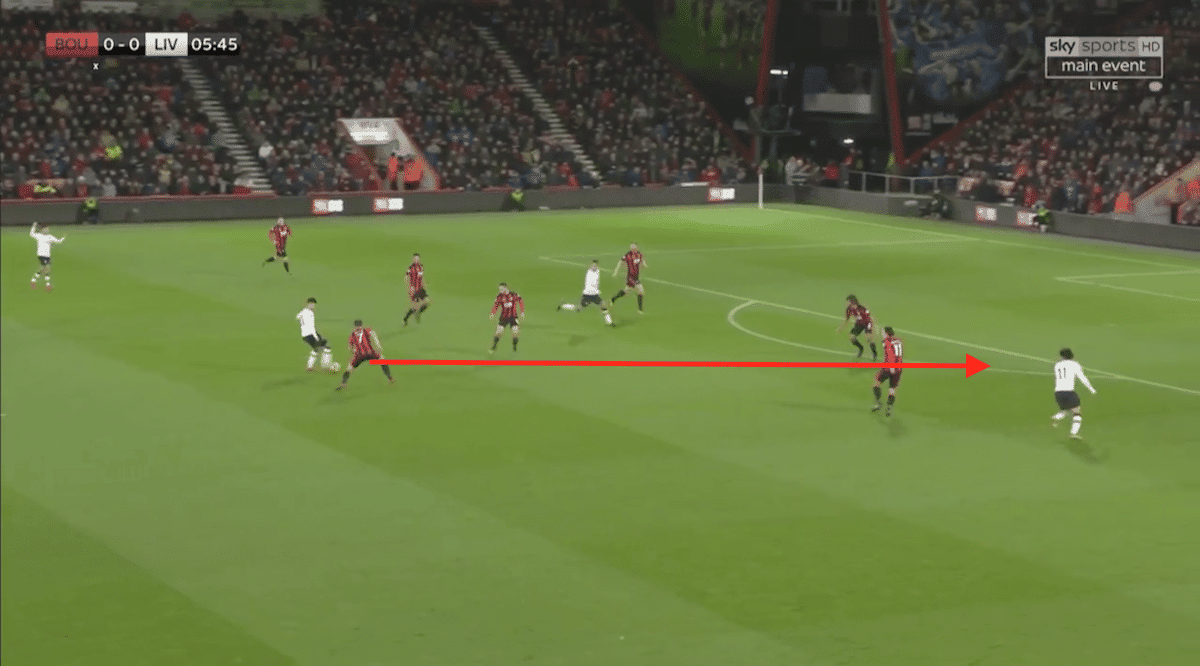 He doesn't just stop a Bournemouth attack, though. He also starts a Liverpool one. He bursts into the space ahead of him before attempting a clever pass with the outside of his boot.

It doesn't reach Salah but the thought was there early on. He was continuously trying to spring a counter-attack.

His ability to go through the gears with great speed was vital to this and it's not something Liverpool have had in the middle third before. 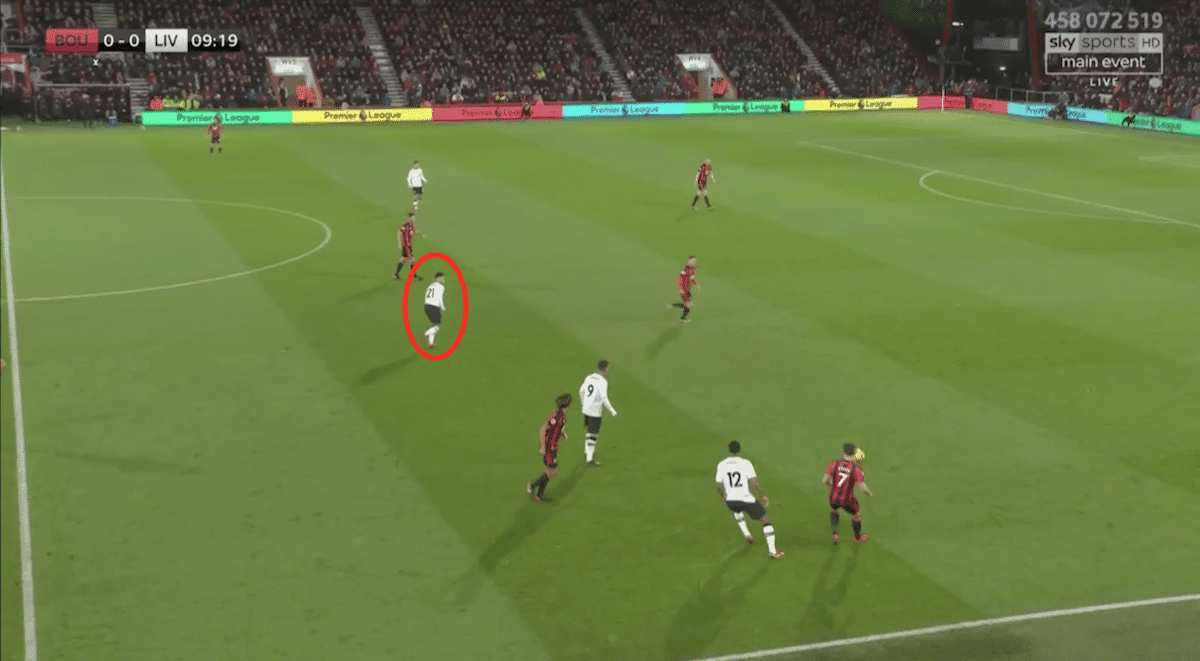 This time around you see Oxlade-Chamberlain, circled in red, tracking a Bournemouth midfielder who has dropped deep to pick up possession. It looks like harmless play but it's in this area of the pitch that Liverpool have been hurt on a few occasions this season.

They've stood off the opposition and allowed them to pick a pass from a deep area. It happened against Burnley in the 1-1 draw and away to Newcastle. It's prime pressing territory. 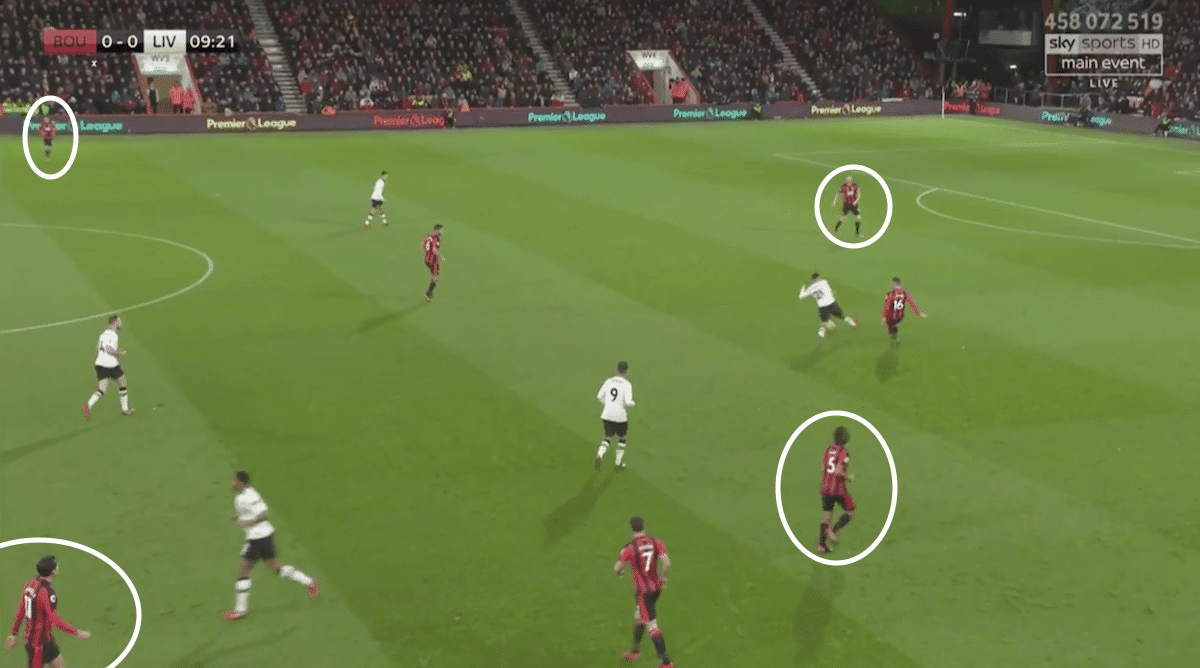 It's Oxlade-Chamberlain's burst of pace, something the other midfielders don't have. that results in Liverpool regaining possession.

He races to close down the passing lane for the man on the ball and manages to deflect it into the path of Philippe Coutinho. The Brazilian plays a one-two with the midfielder before chipping the ball into the path of Firmino.

Nathan Ake clips the Liverpool No.9 and Coutinho hits the post with the resulting free-kick. The opportunity only comes about because Oxlade-Chamberlain was playing as a central midfielder. 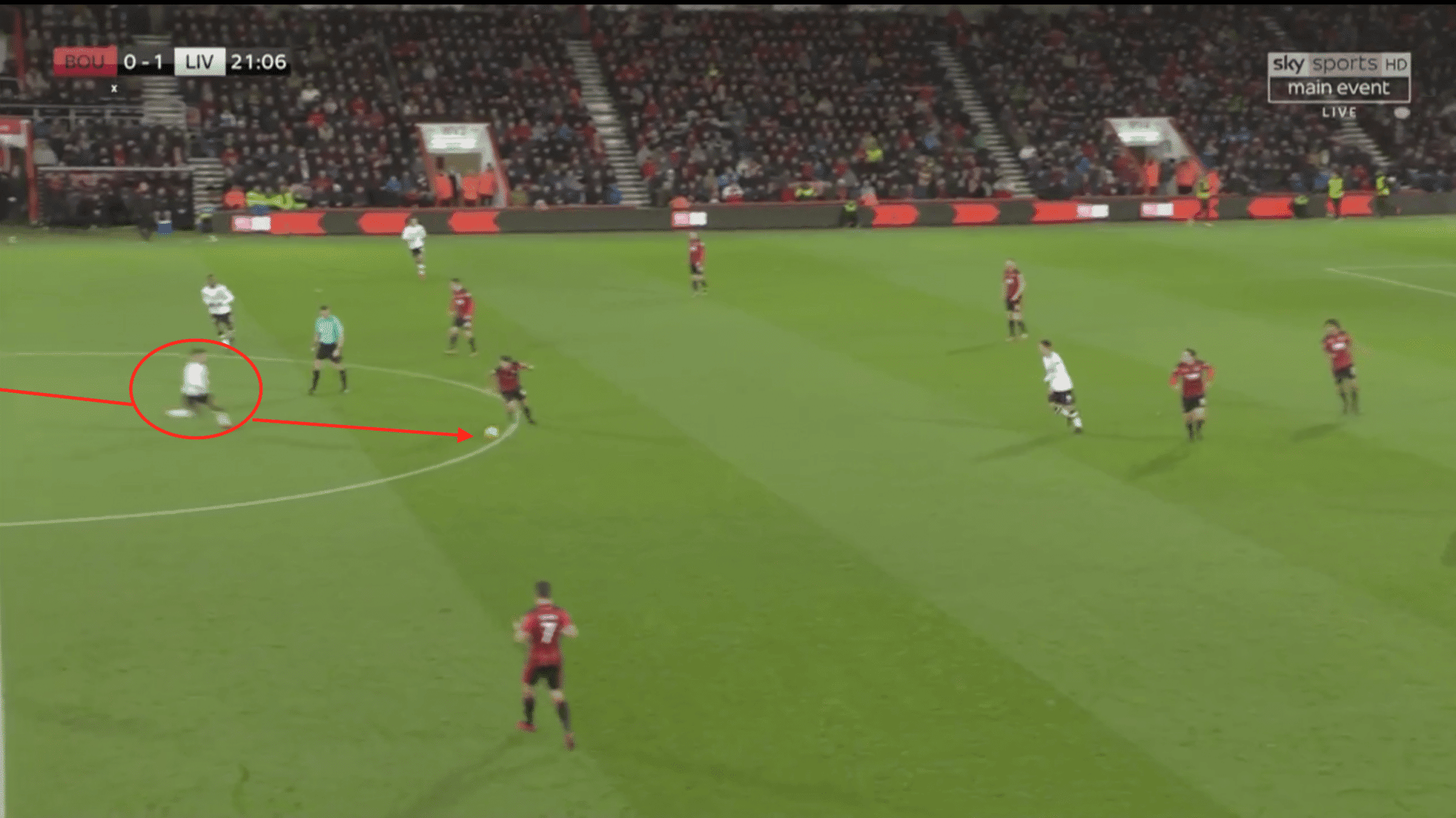 Again we see how Oxlade-Chamberlain's pace makes such a difference in the middle third. Bournemouth again look to play out and the man in possession has a fairly straightforward pass to the player to his left.

You see the Liverpool midfielder, circled in red, racing to shut him down. Many in this situation aren't quick enough, the ball is passed and they're out of possession. 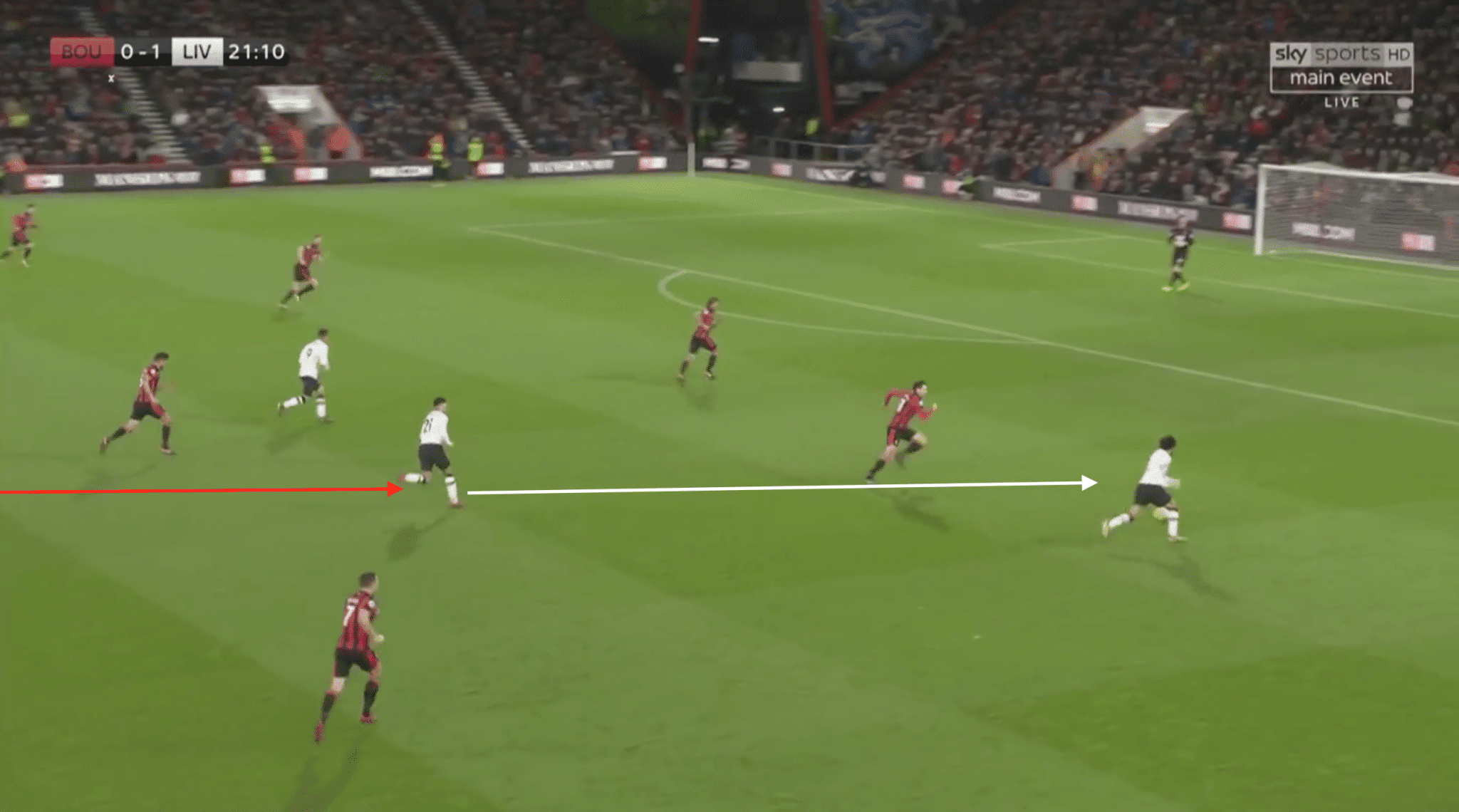 But Oxlade-Chamberlain is. Not only does he stop the pass, he wins the ball and starts a Liverpool attack. He drives into the space, attacks the Bournemouth backline and plays the pass to Salah who has managed to isolate Charlie Daniels.

The midfielder carries on with his run into the area and drags a Ake with him. It allows Salah to cut inside onto his favoured left foot but his curled effort goes over the bar. These three examples came inside the opening 21 minutes, but he did it throughout the comfortable win.

Oxlade-Chamberlain offers everything Lallana did in that role but has the acceleration and power that the 29-year-old lacked. If the performance against Bournemouth was a sign of things to come then the Liverpool No.21 could be a key cog in the Liverpool team moving forward.

At the time the Reds appeared to have overpaid for the ex-Southampton youngster but in the long-term he could well be a clever signing.