Jürgen Klopp has a number of selection headaches going into the match against West Ham United. The Liverpool manager is unable to call upon the services of Sadio Mané, Philippe Coutinho, Gini Wijnaldum, Adam Lallana, Nathaniel Clyne and Dejan Lovren.

However, despite a number of key players missing out, his toughest decision may come when he has to leave one of Daniel Sturridge, Roberto Firmino or Alex Oxlade-Chamberlain out of the starting XI.

For many it may be an easy choice: Sturridge has two goals in two matches and looks sharp. while Firmino followed up his goal against Huddersfield Town with an impressive showing in the Champions League win over Maribor.

Oxlade-Chamberlain, who was only making his second start for the club on Wednesday evening, would be the obvious man to miss out.

Sturridge, Firmino and Mohamed Salah already have an understanding as an attacking trio and have bagged 19 goals between them this season. The dynamic between the three players is far from perfect, but the more minutes they get together the more consistent they’ll become.

After all, Klopp likes familiarity. If he’s unable to go with his favoured line-up then more often than not he’ll go with players and a system he’s used before, despite there being a number of different possibilities. Some may say it’s a safe bet, and as a fan it can be frustrating, but it’s the manager ensuring he’s in control of the situation.

However, against the lowly Hammers, the former Borussia Dortmund boss may be tempted to go with the relative unknown which sees Sturridge start on the bench and Oxlade-Chamberlain line-up alongside Salah and Firmino in the three-pronged attack.

The ex-Arsenal may played 90 minutes during midweek but should get the nod to start against the team just one point above the relegation zone. While a number of players in the West Ham squad are underperforming and the pressure is on Slaven Bilić, a problem area for the Croatian happens to the the right-back position.

There have been question marks over Pablo Zabaleta since his arrival from Manchester City, but Sam Byram has toiled there with both full-backs not getting sufficient enough protection from those ahead of them.

A theme has become evident when analysing the goals West Ham have conceded over recent weeks. Wilfried Zaha curled home a late, late equaliser last week to recuse a draw for bottom club Crystal Palace as they came from 2-0 down. The former Manchester United man picked the ball up on the left before cutting inside and curling an effort past Joe Hart.

During the 3-2 Carabao Cup win over Tottenham Hotspur, both goals for the home side came from the West Ham right in some capacity. The first arrived after Dele Alli attacked that flank, cutting inside onto his favoured right foot before threading it through to Moussa Sissoko who passed the ball home.

Alli was one again involved. This time the 21-year-old drifted in from the Spurs left to exchange passes with Heung-Min Son before guiding it past Adrian between the sticks for Bilić's men.

José Izquierdo scored a similar goal during Brighton & Hove Albion's 3-0 win. The Colombian attacked the West Ham right-back, threatening to go on the outside before chopping back onto his right, cutting inside and firing home from outside the penalty area.

Zaha and Izquierdo troubled West Ham throughout with their pace, direct nature and aggression when in possession. The Hammers have an obvious weakness and it would be naive of Klopp not to exploit it.

Liverpool have players of a similar profile but with Mané ruled out and Salah at home on the Liverpool right, the Reds aren't spoilt for choice and Oxlade-Chamberlain is the only player to really tick those boxes.

It's why his inclusion should be an obvious one. Against Maribor, when deployed in the front three, he completed three dribbles, had three shots and, as you can see in the graphic below (number 21) taken from whoscored.com to show average positions, found himself in central areas of the pitch after cutting inside. 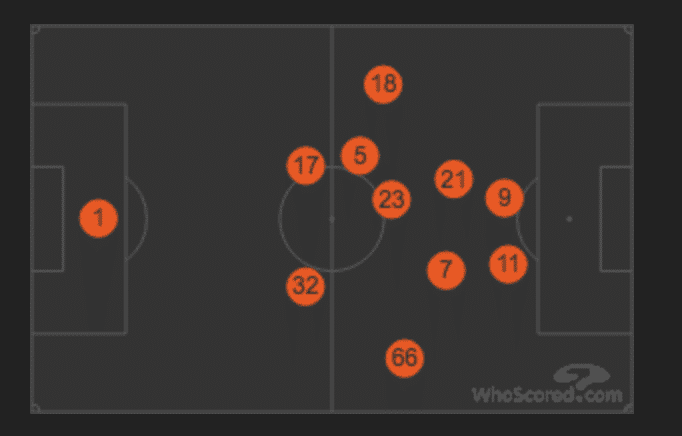 Furthermore, Klopp has been full of praise for Oxlade-Chamberlain over recent weeks. The Liverpool manager praised his contribution as a sub in the win over Huddersfield and told the official Liverpool website: “I do want to specifically mention Alex Oxlade-Chamberlain.

“He has shown his class each and every time he has had the opportunity on the pitch, and the weekend was another example. He is like dynamite when he comes on, aggressive in the most positive way, looking to attack and create.

“He was good, he offered a lot, I loved his counter-pressing situations. I'm not sure he did this a lot of times in his life already so it was really nice to see.”

He hinted at a possible start in the Premier League and with the injuries Liverpool have it's an ideal opportunity to do so against West Ham this weekend.

“He is very much in the infancy of his Liverpool life, but the world in 2017 doesn't always allow for patience. But he is doing everything right, and because of this I know he will be a big success for us.”

“If he starts a game, he is not far from starting a Premier League game, no?”.

He started the Champions League game. Now it's time for Klopp to give Oxlade-Chamberlain his first start in the Premier League for the club. He won't get the same attention as the likes of Salah or Firmino but his involvement could be just as important to the Reds going back to Merseyside with all three points.