The upcoming League One duel between Oxford and Shrewsbury probably won't have a huge impact on the standings. Still, the match offers a few interesting betting opportunities, so check our preview and free betting predictions for this game.

While these two teams will in all likelihood be playing in League One again next season, it doesn't mean that we won't see an exciting match. With that in mind, we have prepared a few of our favourite betting tips and predictions for Oxford vs Shrewsbury:

Odds are subject to change, so make sure to check them before you make a bet. Our recommended bookmaker for this match is Ladbrokes.

Since Oxford still has a chance to catch a late train to the playoffs, they will be motivated to get a win. And after a few bad results, they've humiliated Crewe 6-0 over the weekend, so their confidence is certainly at a very high level right now. Another thing that goes their way is the recent h2h history with Shrewsbury since they've won three of the last five meetings between them.

Oxford to Score in Both Halves

We expect Oxford to win this game, and we expect to see plenty of goals scored in the match, so we feel that betting on Oxford to score in both halves is worth a try. In addition to this, Oxford is fourth in League One in matches in which they have scored in both halves. Also, the team has scored at least 2 goals in four of the last five head-to-head duels with Shrewsbury and at least 3 goals in three of those games.

If you are looking for the best odds for Oxford vs Shrewsbury, we've got you covered. Check out our selection of odds from top bookies:

Oxford vs Shrewsbury preview – Can Oxford reach the playoffs?

The performance in the last game against Crewe in which Oxford won 6-0 has given The U's a bit of hope that they might make a late push for the playoffs. The team is currently four points behind Lincoln in the 6th spot, although Oxford has played two more games. And despite that impressive result against Crewe, Oxford United isn't in such great form since they've only won two of their last five games in the league. Additionally, Oxford may be without Ruffels, Gorring, Hall, McGuane and Mousinho, who are all questionable at the moment.

Unlike Oxford, Shrewsbury doesn't have anything to worry about or any hope of making the playoffs. It's clear that they are safe from relegation and too far away from the top. The team has been pretty inconsistent lately, with two wins, two losses, and a draw in their last five league games. And since the team is without a real motive, we can expect to see more of this inconsistency. Walker, Pierre, and Daniels are questionable for the upcoming duel.

Common questions for Oxford vs Shrewsbury 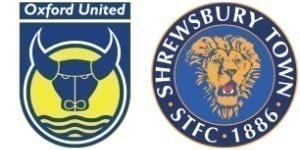