With the greatest of respect to Plymouth fans, this fixture is all about Oxford and their fight to make the top six. Can they take another step in that direction on Saturday? Find out with our Oxford vs Plymouth match preview with free tips, predictions and odds mentioned along the way.

Our predictions for Oxford vs Plymouth

Oxford to turn up the heat

If the truth be told Plymouth look like they've taken their foot off the gas knowing their fate for the season is sealed; they're going nowhere. Oxford, however, are well and truly in the fight for a play off berth. Those aspirations were damaged in the shape of a loss to Wimbledon in the week but three wins before that mean their form is still pretty respectable. Plymouth meanwhile will arrive at the Kassam Stadium both unmotivated by league position and low on confidence after being hit for six against Charlton on Tuesday. The summarised version? Oxford will win.

The first of our tips has referenced a 6-0 thrashing Charlton dished out to Plymouth last time out. As high scoring games go, it's not a one off. Across Plymouth's last five games they've seen a total of 15 goals with three of those matches finishing in excess of 2.5 goals. Where Oxford are concerned, you have to go back eight games – over a month – to the last time their fixture didn't feature at least three goals. Their last two home games have seen a combined 10 goals with Oxford responsible for seven of them.

A win to boost the goal difference for Oxford?

Okay, the last of our tips is an ambitious one as we predict Oxford will win the match even with a -2 starting position. You can at least look forward to good odds if they bet comes in. Why do we think it might? Well, Plymouth have lost three of their last four with the losses coming in at a combined score of 12-0; that's made up of the 6-0 we've touched on and two further 3-0 defeats. Then you have their hosts for Saturday. Of Oxford's last three victories they've posted scores of 3-2, which doesn't fit this bet, and then a 4-1 and a 6-0 victory of their own. A two goal handicap is never a straightforward tip but as out there predictions go, it's got a real chance.

Oxford vs Plymouth: Swot up pre-game

Oxford to fight for top six to the bitter end

Plymouth's season being over isn't a bad thing given they're not a million miles off the bottom four but it's hardly captivating. The same cannot be said for the top of the table. That's where Oxford find themselves looking and, even though they're relying on other results, they need to go about their business of getting wins. It will make this a very good game to tune in to.

Oxford vs Plymouth: Your questions answered 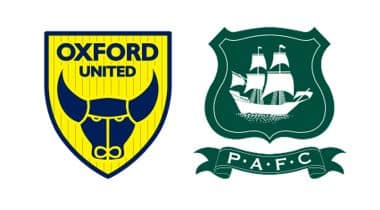