Oxford are alive and kicking in the hunt for promotion. Gillingham are sleep walking to the end of the season. It should mean a routine home win but will it? Find out with our Oxford vs Gillingham match preview with free tips, predictions and odds mentioned along the way.

Oxford vs Gillingham: The tips you need

Oxford to keep hot on the promotion trail

Back to back defeats for Oxford had suggested they'd ran out of steam in their playoff hunt. Nobody is saying that now. They've just produced two stunning performances to put them right back in contention for a top six spot. When they're playing host to a Gillingham side that have managed just one win in five it's hardly surprising that we are making the prediction that Oxford make it three wins on the spin. They've won the last four meetings between the pair at the Kassam Stadium too.

We're expecting a few goals to go flying in

Sometimes tips for the over/under 2.5 goals markets can be fairly tight to justify with stats owing to the fact it is a number that regularly drops narrowly either side. Well, the stats tell a different picture this time. Across the last five matches Oxford fans have seen 21 goals fly in – that's an average of 4.2 per match – with every one of the five seeing at least three goals. Gillingham's average over the same period comes in slightly under at 2.4 but the Oxford form should more than accommodate for the shortfall.

If our prediction for a goal filled encounter comes to fruition then there is a good chance the last of our tips comes in too. It's not just plucked from nowhere though. Gillingham have scored in eight of their last 10 away matches whilst keeping just two clean sheets. Oxford have hit 10 goals in the last two matches; there is no chance of them not having their shooting boots on. They've conceded in their last four home games too.

Oxford vs Gillingham: Head to Head stats and much more

Oxford's form across the past two fixtures hasn't just been about getting three points. It's been about showing they're firing on all cylinders; given how the playoffs work it's not a bad time to be finding your stride. Gillingham will be doing their best to stop them but it won't be easy given what their hosts have to play for.

Oxford vs Gillingham: A final thought 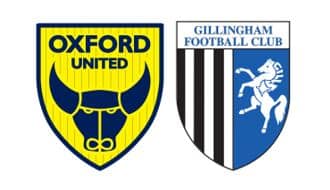