Forget the fact the tables have these sides separated by just two points; instead look to the form guide. Across the last 15 matches, Accrington would sit in the bottom three having suffered seven defeats. Oxford would be mid-table. Then there is a more recent view to take, which assists our prediction. Accrington have won none of their last five away trips and have taken the three points just once in 10 attempts. The hosts' home ground is far from a fortress but they have only lost once in five matches; two of those five did end in goalless draws though.

Both teams not to score

The first of our tips just mentioned two of the last five matches at the Kassam Stadium have ended 0-0. Well, extend that further and there have only been three games in 10 where both sides have found the net. As for Accrington's away form, five of their last 10 have seen at least one team blank. Throw in the fact that Accrington have failed to score in two games and all of a sudden BTTS ‘No' looks like a healthy prediction.

Oxford to win or draw, Accrington under 0.5 first half goals and under 3.5 in the game

If you've read our first prediction and see an element of risk in backing Oxford for the win then our final tip might appeal as you'll also have the draw covered. Remember, Oxford have only lost one of their last five home games. As for the under 0.5 Accrington goals in the first half the visitors haven't managed to net in the opening 45 of their last four away games. The final hurdle to cross is the under 3.5 goals. Oxford's home games haven't breached that threshold for eight matches whilst Accrington are unlikely to be too open – they'll still be hurting from that 7-0 thrashing a couple of games back.

All the stats and odds for Oxford vs Accrington Stanley

If either one of these sides were to string together a run of three or four wins then the playoffs would land back on their radars. It feels like a prediction that nobody is going to make though because neither Oxford or Accrington look like putting that little run together. The home side, who were reduced to 10 men for the final half hour, put in a decent display against Sunderland but got nothing for their trouble whilst Accrington played out a stalemate with Burton to ease some of the pressure after Peterborough took them apart in the last March fixture. A win for either side arguably keeps their season alive; anything else and they'll be looking to the summer holiday.

FAQ about Oxford vs Accrington Stanley 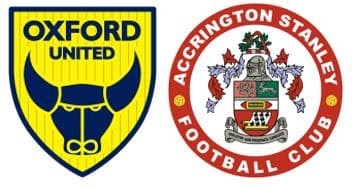